Colors, colors everywhere, but how good are you at actually describing the ones you see around you? And do you and your friends feel that colors can match your description? Well, Hues and Cues is a very interesting, yet simple, game where you take turns describing colors and guessing what is being described. This game is made for three to ten players, aged eight and up, and is an easy and quick game to play through!

Hues and Cues is a pretty simple game. In the middle of you and your friends there will be a giant board full of squares of colors. This board is quite pretty to look at! At the top of the board, there is a score counter where each player places one of their colored meeples. They then have two other colored meeples left to use when guessing what color everyone is trying to find. Before you are able to guess though you’ll need to have a clue at the color — somebody will pick up a card and not reveal it to everyone else. Each card has four colored squares on it, with each square being a place on the board. The location on the board is given, as well as the color of the tile — so that you don’t need to stare at the board to find it. 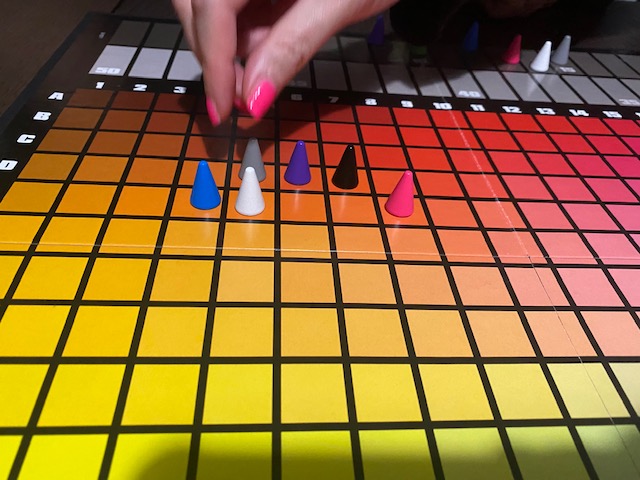 Once you have picked the color you want to describe, you will be able to say one word to let everyone know what color you have. If you have a green then you might say Lime, for example. You are unable to say the color or an object in the room that is the same color that people can see. After you have stated your color, going clockwise around the table, everyone will place their first meeple on the square they think is likely the color. Only one meeple can be on each square.

When everyone has placed their first meeple, the person who picked the color will then state two words to describe the color they picked. These two words can include the first word they used, but still can’t be an object in the room or the name of the color. Moving counterclockwise, everyone will then place down their second meeple. Then the round closes out. 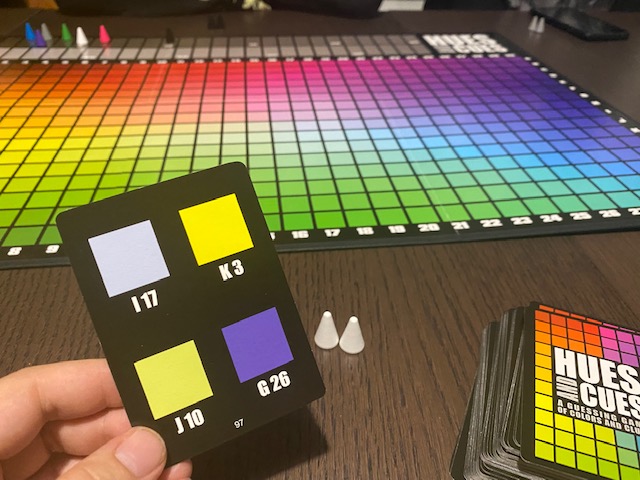 After everyone has selected their colors in Hues and Cues, the person who picked the color uses a little box, which is then placed with their chosen color in the center. If anyone got a meeple of the exact color, they get three points. If their meeple was on the ring around the chosen color, they get two points and if they have a meeple outside the square, they get one point. These points are awarded per meeple and tracked on the scoreboard on the top. The person that chooses the color also gets points depending on how many people made it inside the box and nearby, so you’ll want people to guess your color!

Hues and Cues is just that simple. One person draws a card, they say a word, people place their meeples, they say two words, people place their meeple, the color is revealed and points are handed out. With such a simple game, it makes for a good ice breaker or casual game to play between larger games. It’s worth mentioning that the game is better played in a well-lit room, as sometimes the cards and squares can look different depending on the lighting in the room, so you should always look at the color on the board, to ensure you are trying to lead players to the same place. 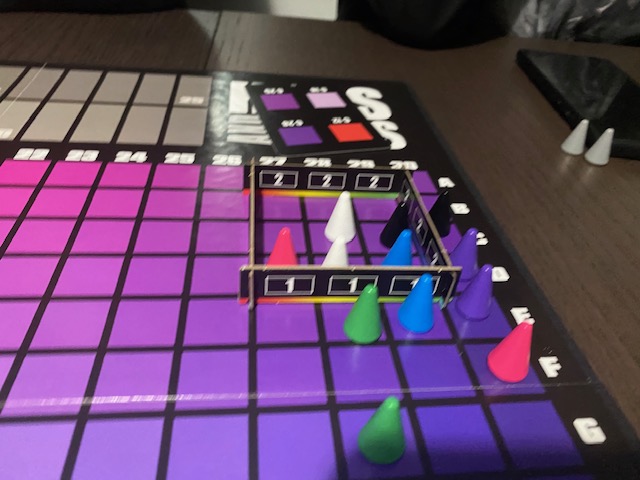 There is a lot of challenge when it comes to only having one word, and then just two, to convince people to pick the same color as you. With so many different shades on the board, it’s a challenge to lead people to the exact one you have in mind. But, it’s almost like a social experiment, where you are trying to see if everyone thinks a flamingo is the same-ish color! Although it’s not a game I see us dipping into often, Hues and Cues was an interesting challenge.

You can find Hues and Cues on Amazon.