The Tycoon genre is thriving at the moment and, much like with the simulator space, it’s spiralling in all sorts of directions. Arcade Oven’s Hotel Magnate is grounded entirely in reality and really makes me wonder why there haven’t been more attempts to create tycoon and management games in the years since the Hotel Giant franchise faded away.

The toolbox that’s normally at a player’s disposal in tycoon games fits perfectly onto the idea of running a hotel. In fact, it’s easily one of the best fits, perhaps more so than the settings that kicked off the genre. Much like hospitals and amusement parks the visitors are only temporary and have a set amount of cash to spend, but there are also plenty of opportunities to cater to more expectant guests and even more to plenty of opportunities to monetise.  Just through its subject matter, Hotel Magnate already starts off on a stronger foot than most of its tycoon contemporaries, but the developers haven’t let that opportunity go wasted.

As it currently stands, Hotel Magnate has a lot of content already included. Gameplay is strictly sandbox-style, with objectives that increase your hotel’s star rating and unlock new hotel items and options including catering, casino, entertainment and more. There’s not much in the way of tutorials or guidance at present, and so returning to a save after a while away did result in a few less-common mechanics being forgotten; For instance, you have to click on the floor in a room to assign it a room type. If you don’t do this then it simply remains a space with objects in it — there is, currently, no pop-up to advise you of unassigned rooms.

Design and building will feel familiar to most people who have played The Sims, or other Tycoon titles. I enjoyed the ease of room design, and the shortcuts to bulk paint or pave a space are familiar and make for light work. I’ve played games over the last year which have lacked these short keys and having to individually paint a wall can be a complete drag. I do wish that there was the ability to drag-drop a room into existence, and the fact that you can’t currently build multiple floors into your hotel does take away some of the fun, especially as the current lot size is quite restrictive. 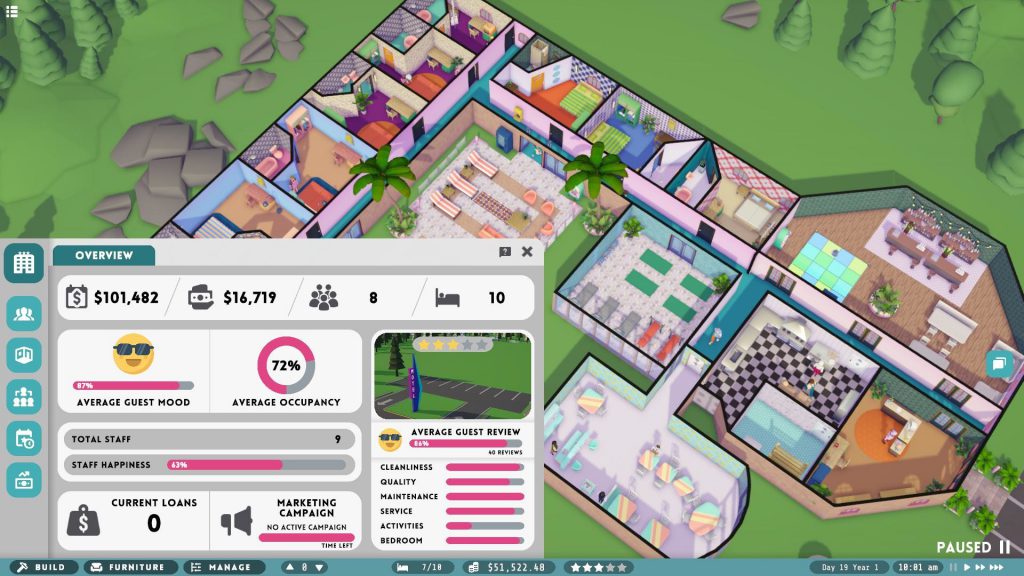 That said, there’s a very visible roadmap for Hotel Magnate available through the main menu, with Day Visitors, individual room pricing, pools and more already planned. There’re also some interesting improvements and features in the design backlog including catastrophes, family guests and more.

Hotel Magnate is easily one of the most promising games in Steam Early Access at the moment. Hopefully, the developers will keep adding new features as well as adding more character to the visitors and staff; I’d really like to see attitudes bounce off of each other, fights and arguments and more visitor-driven challenges. Based on how development is currently proceeding, with several major updates already deployed, that’s a possibility.

Hotel Magnate is available (in Early Access) for PC, Mac and Linux.