Before I start I would like to warn all who use the ‘AMD Gaming Evolved ‘program that Hiiro does NOT work while using it. All you will get is lots of error messages.

Hiiro is one of those games that will make you get either very angry, or it will make you wonder why our sun can’t provide more hours in a day to be able to play more games such as this. In Hiiro you can’t die. There are no power ups, you have the exact same skill set throughout, and you look exactly the same at the start of the game as you will at the end, with one of the multiple endings (There are three of these I believe) selected to you by how much in-game collectables you have collected and how many secrets have been found.

Hiiro is, as you can see from the screenshots a 2D platformer with small puzzle sections mainly safe-guarding the bigger items in the game. The smaller items, mainly the yellow floating cubes, can be seen in the inventory screen with everything else that you need to collect to unlock other puzzles and advance even further. It’s all very simple the gameplay, but there is a very strong addictive feel that you get when the game grabs you, and it grabs you well; and like myself you’ll lose hours collecting everything…but that’s if you let it. 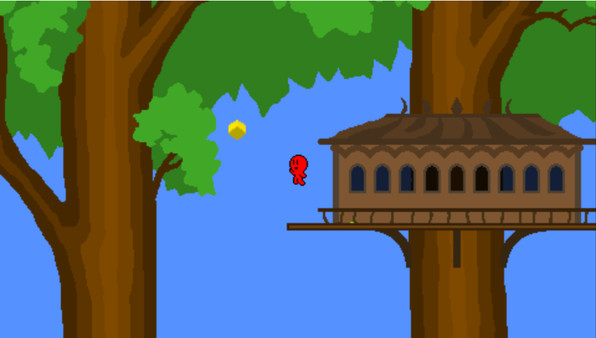 Controls are simple as anything with the arrow keys being used to move. Up arrow is jump, press it again in the air to make your red fellow jump a second time, or in gaming slang double jump, “A” opens up your inventory screen, and if you press it again will open up a map screen of sorts, which will hint to you where to go next with a flashing dot X amount of squares away, and yep each square of the map screen is indicated by each screen. The tricky thing is getting to that particular screen as there is sometimes only one route to a certain screen, so try ‘n map out the game in your head if you can. Also I just remembered that the controls can not be changed, which as simple as the controls are, it can still be an issue for players who do wish to change the key bindings. 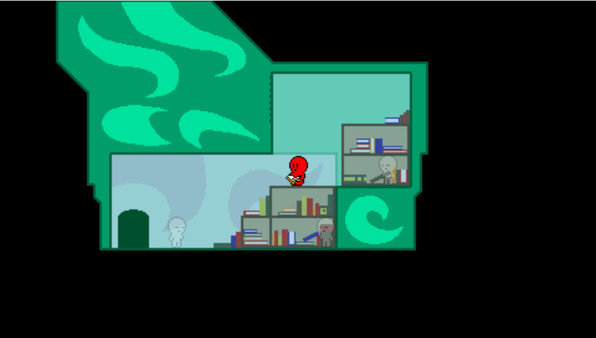 The music goes fantastically well with the game as it’s very chilled out ‘n blends in so well when you pop in to another biome, (talk more about the biome’s later) there is no talking in language that follows other games, but later on when you start to “bump” into other NPC’s and they’ll use speech bubbles filled with symbols within them and its up to you to decipher them..

The story is a bemusing one as Iv’e seen it on the Steam product page but have no idea on how to access it in my copy of the game also there is an DLC costing 79p which has the soundtrack and also Hiiro story under it’s content so I’m unsure if the short video we see on Steam is the one we download if we buy the DLC or it’s some kind of extra file we manually activate, either way it sounds a bit odd but anyway as I presume Hiiro is trying to save the dieing tree by collecting the yellow cube items which I’m guessing is the life force of the tree but that’s just a guess from what I’ve from the Steam video.

Biomes, I believe there are 8 of them – I won’t mention any as I don’t to spoil too much of the game – but they do link up very well as in an instance (puzzle) there’s hot lava under your character making the water you need to enter push you up but you need to swim lower to enter the new biome but all biomes contain a large yellow cube; when you find one, all of the smaller ones get shown on the map in that biome, so it’s a great way of finishing off an area unless of course there’s other things you need to find in that given biome, e.g. books and keys to name a couple.

The graphics are an absolute joy in this day ‘n age, and in an age where so many gamer’s these days just want the best looking graphical game, Hiiro stands out and uses pastalised colours and it looks great. It plays nice ‘n smoothly as well, plus you can tell where certain secrets are in the game as there’s always a difference in the floor, or wall. Either that or there’ll be something that’ll resemble an arrow, which is the main dev’s (Jon Tiburzi) way of giving you a gentle nudge for you to find something.

P.S. the secrets start as early as the first screen