Having a Delightful Time in Trapper’s Delight 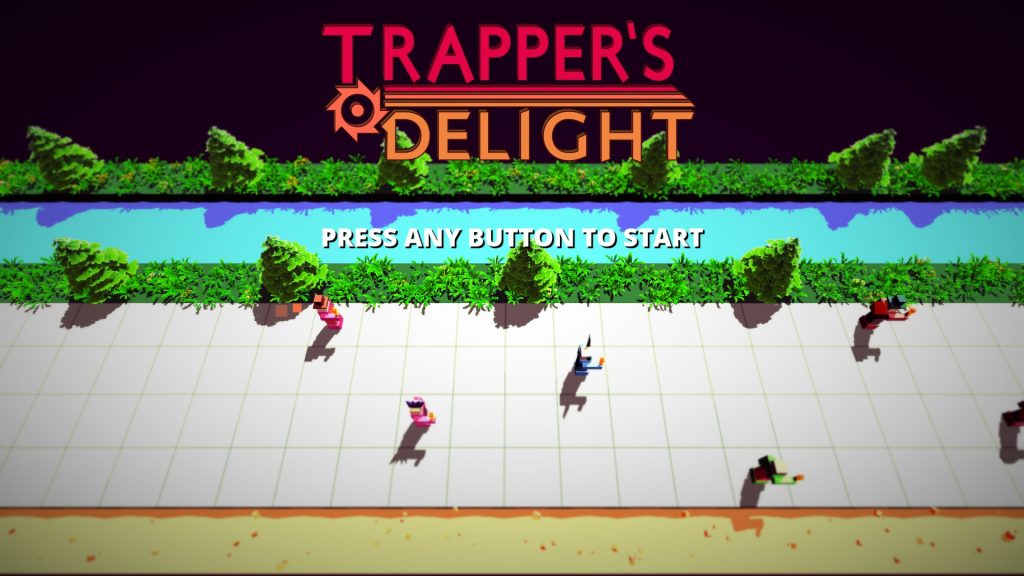 Trapper’s Delight has been in early access since 19th July 2016 on Steam, which can be played either online or locally with up to 3 other players but where this shines is online.

I was playing with my eldest child at 7 years old he didn’t understand that you need to be a little bit evil by laying down traps, but we could both see what kind of traps we were both putting down, and it was then that I knew the game was not meant for local play, but more so online. If you’re reading this for a game for all of the family to play then get something else, as your loved ones or children will hate you after a few rounds because you will need to think of some very evil plots to ensure victory, but that’s the whole point in games like this where there’s no need for stories or any background lore. It’s a good job really ‘cos there ain’t any in Trapper’s Delight. 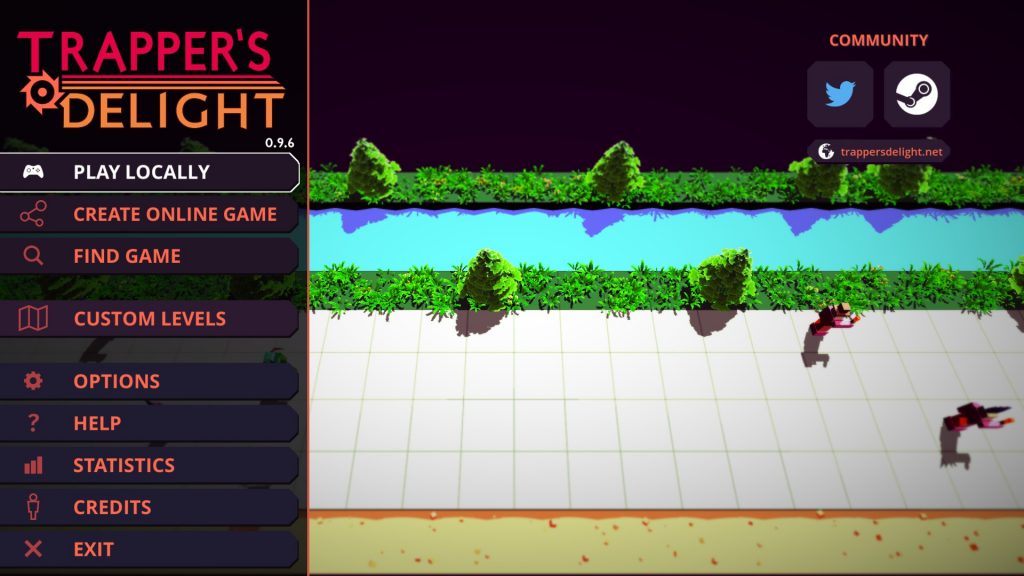 Gameplay is controlled either with a keyboard and mouse, or gamepad. Both setups work wonderfully as everything is shown easily and shows what buttons to press by placing traps in-between rounds and rounding up points, and when you earn enough points you get to place a super trap, which aren’t too over the top, like say nuclear blasts or anything of that nature, but the traps themselves range from timed traps to floors that dissolve. With the dissolving floors, the tile that vanishes reveals a water, lava, or toxic tile underneath – the eternity of the maps are made from tiles –  and there’s even some traps that shoot ammunition all the time, or when your character (which can be customised to look different than the other 3 characters) is in line of sight.

You don’t even need to worry about powering up your traps as they’ll just keep working, or they will until someone places a trap over it, or destroys it by placing down TNT that destroys it. Fear not though, as the TNT has a 5 second timer on it which is easily seen, and they only have a 3 x 3 blast radius, so they’re not too overpowering but they work great if you manage to get one.

You’ll find yourself getting annoyed at other people’s traps throughout and all of this is happening in real time. there’s no turn-based gameplay here, and that’s why I like the game so much, it’s fast paced and allows you to be as evil as you secretly are, Oh and I nearly forgot, you can also collect coins around the world and you can place coins down as well to entice other players to go down a certain route. This also adds to the players points and after every round you get to place more traps and coins.

You can set all the rules for a match yourself on your own server, so if you don’t like certain traps, that’s fine you can just turn them off. Even I managed to host a server, and I put all 35 stock maps into the server and waited a couple of minutes, and before I knew it, it was up to 3 players and we was all having a laugh. 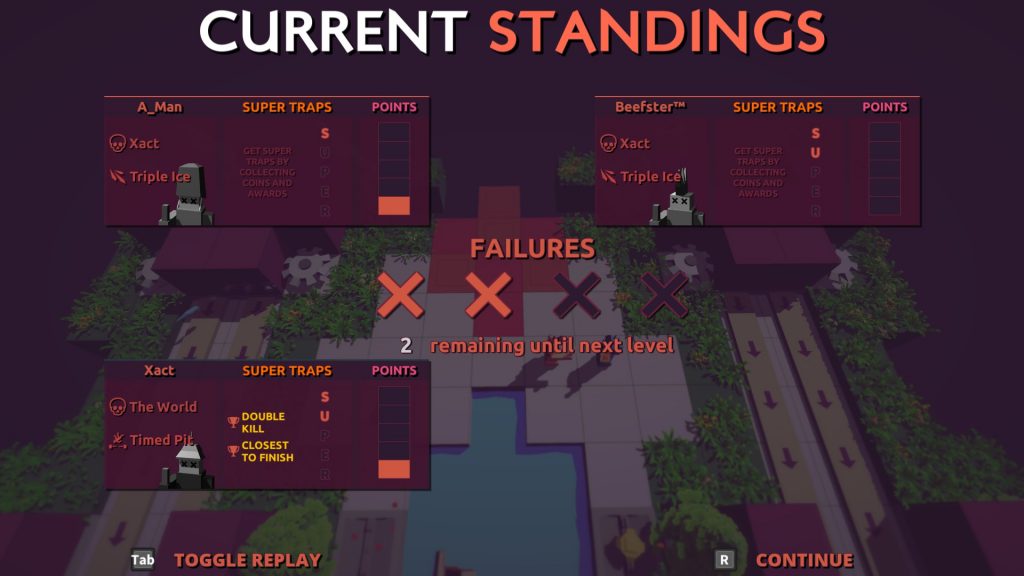 The graphics aren’t that incredible, so if you’ve got a brand new Nvidia GPU then you’ll be fine, in fact I wouldn’t be surprised if anyone with a 10-year-old GPU would be fine on this title as I’ve never heard anyone complain about any FPS drops whilst playing, even when 5 or more traps were getting activated all at the same time, and as you can see from the screenshots, it’s all very bright ‘n colourful with it being easy on the eyes, although thinking about it, the graphics reminded me of Crossy Roads, it suited the game perfectly. 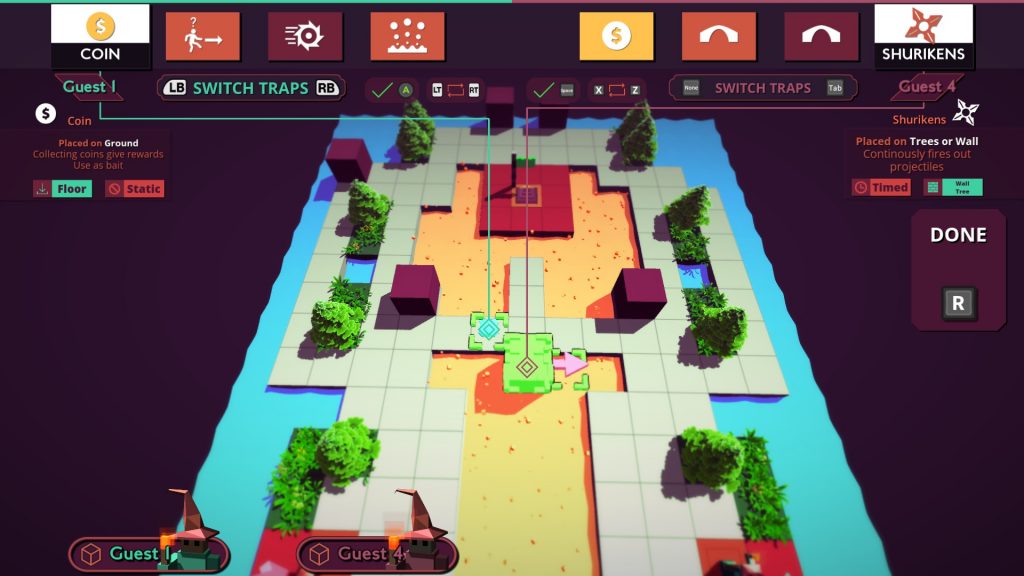 Steam Workshop is also implemented in Trapper’s Delight, so you can build your own maps, set starting traps, set where to start and end, ‘n as long as there’s a way through to the flag… sorry portal, you can upload it to Steam’s Workshop. Others can put it on their servers, but be warned, you can’t place traps around the starting or ending area’s marked as red tiles, and you always spawn in a random position at the starting area, so it’s always ideal to plan all around the start as I’ve found out many times, if you block off one area when you don’t spawn there in a round, you will later on in that map which is also set in the rules, along with how many times you play a map before it moves onto the next. 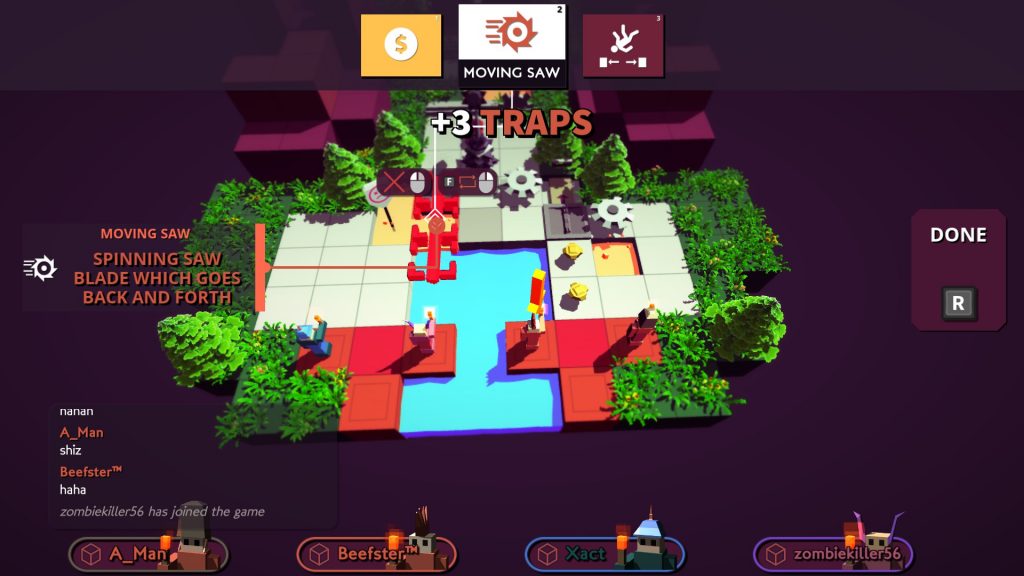 I only found a bug or two whilst playing this, one I found saw me being unable to move the camera whilst creating my own map with my wired 360 controller plugged in.

Trapper’s Delight finds itself having some great achievements (25 in total) to work towards, examples being killing “X” amount of players with certain traps, which proved great fun in being evil and forcing players, or just nudging players to go your way. While it’s a very simple game it’s definitely one of my favourite online game’s to come this year, even with it still being in early access but on its way to being fully released soon. For under £7 it’s easily the cheapest Saturday night you’ll have in a long time…just don’t don’t play with friends as they will be become your “frenemies”.

Oh, and if Shrimpcave Industries are reading this, please for the love of Fresh Bread change the “Trap Party” achievement as not all of us have enough controllers to do a 4 player local game. 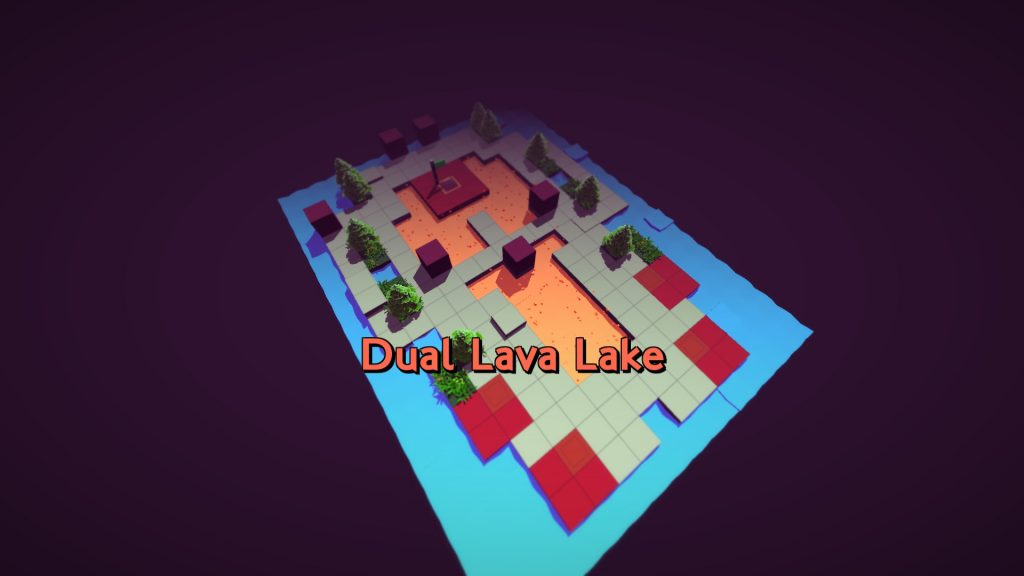