Drive at speed on any surface!

Brutal speed and deadly action combine in GRIP, a spiritual successor to the Rollcage series.

When it comes to gaming I could never claim to be a driving enthusiast, in fact, I can reel off the number of racing games I have had on one hand. One of the few to get a place in my prestigious collection was Rollcage for the PS2. The first entry in a series now being paid tribute to, and expanded upon by Caged Element’s GRIP.

The Rollcage series was originally developed by Attention, and published by Psygnosis. It was a revelation. To me, its unique physics engine, in which cars could drive on walls or ceilings at extreme speeds was a game changer, and it was one that kept me playing long after I had completed the game with my brother. 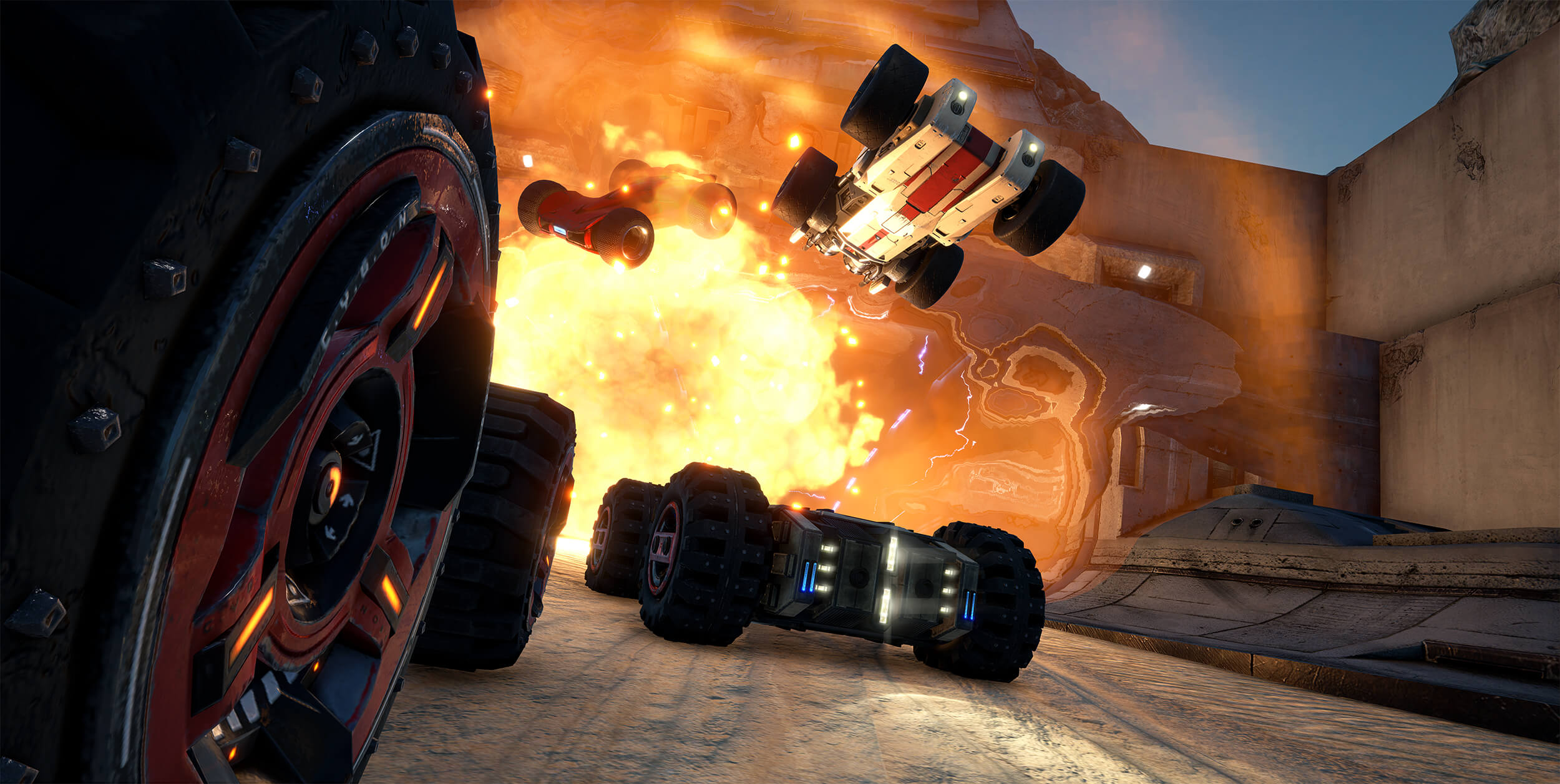 So, you can imagine my delight when I heard that an indie development team called Caged Element was building something similar, following a successful Kickstarter campaign, called GRIP. Some light research quickly revealed that I soon found out that the coder from the original game would also be involved.

After entering into Early Access on PC back in early 2016, the development team announced a console port would be coming, and after seeing a recent tweet from publisher Wired Production, I learned that the game would be showing at EXG Rezzed.

I was lucky enough to sit down with a member of the team while at the event earlier this month, and spend some time playing the game. I am going to state from the start… I was smiling the whole way through my play test. From the moment, I had my hands on the controller, to the disappointing release of giving it to someone else; I was enamoured with the game.

However, before I start swooning, let us start at the beginning.

GRIP, within the game’s own history, is a sport which has its origins in the illegal street-racing scene. Over time this violent street combat spawned a subculture, one which enjoys high speed, outrageous vehicles and immense danger.

The game’s control system is almost a direct replication of the original, I was instantly at ease picking up the button’s mapping, and it didn’t take long at all to adjust to the sensitivity of the analogue sticks. That said, the game does allow for a variety of controller input options.

Now besides the usual car racing controls i.e analogue for camera and car direction, the bumper buttons are used to fire the game’s weapons. This allowed for a quickness when using your weapons and ensuring that you were always aware which weapon was being used… something essential to the game, especially when the gameplay is so quick — firing needs to be thoughtless. At no point did I feel that the control layout was clunky or too fiddly. 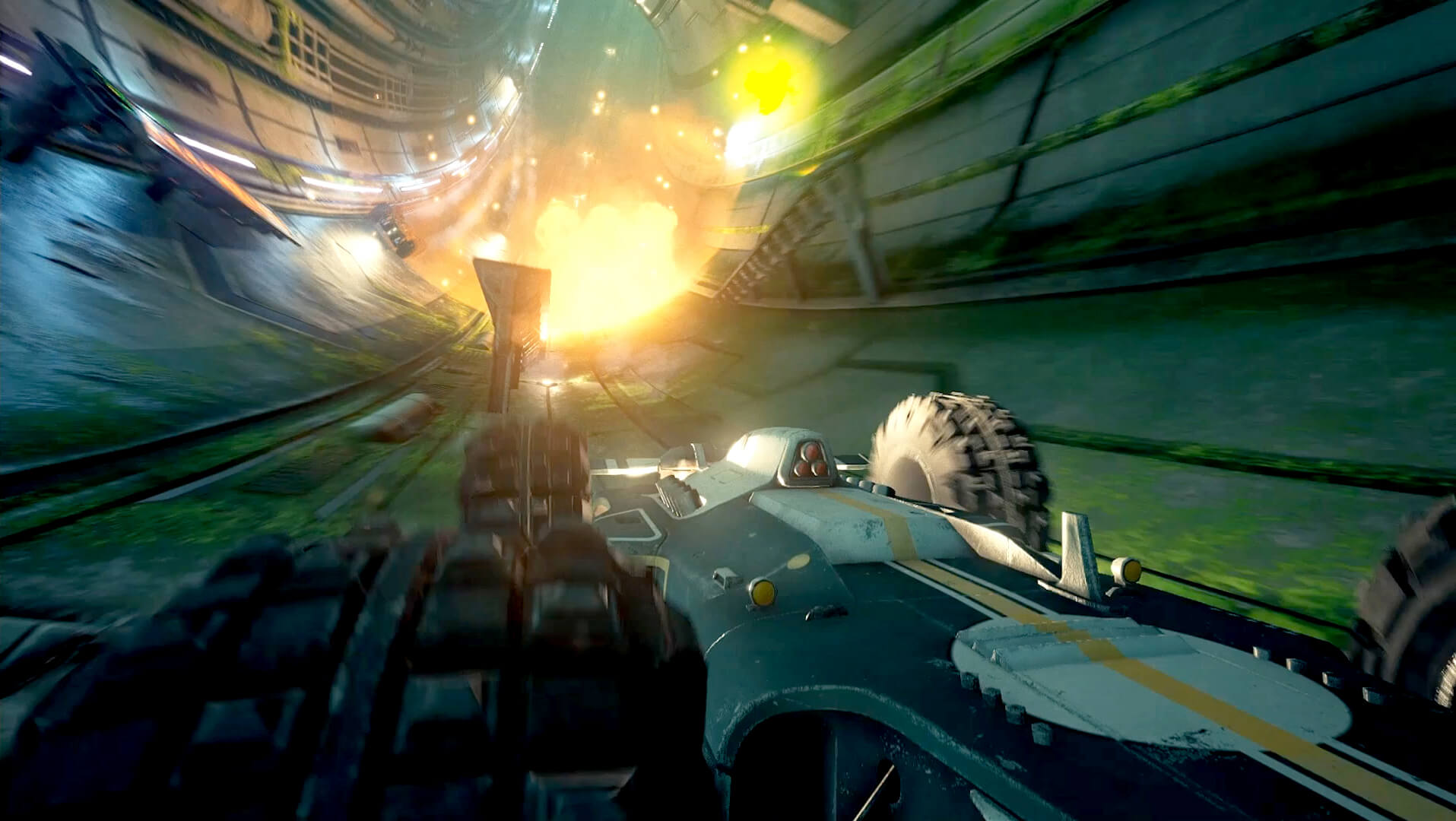 GRIP‘s racing is fast, furious and high addictive. The premise of getting to the finishing line first is flipped on its head by the game’s mechanics and tactical use of weapons and power-ups. Every surface can be driven on, and there are large amounts of environmental elements which can be destroyed, to the detriment of the drivers behind you. Driving becomes a continuous readjustment between pushing your vehicle to its top speed, careful understanding of when to use your position-changing weapons, and a good memory of the map to ensure maximum advantage when doing so.

The game has a variety of weapons, which are cunningly devious, when used correctly, just like in the series which inspired it. They range from mini-guns, smart missiles, EMP and even a weapon designed to only target the person in first place. Lovely..

GRIP features four planets, each of these are then divided into different regions and levels. Between the four planets there’s a lot of variety, each being easy to visually differentiate, and each having a different feel to them. The levels have been carefully designed with a variety of different routes & shortcuts to ensure you never feel the levels are just a standard track simulator. Because of this, careful dissection of each of the map layouts and environmental elements is needed to ensure you take first place, as at any moment you can go from first to last.

Now, the Rollcage series’ debut outing actually had ‘’Fatboy Slim’’ as its main headliner, which provided an amazing experience when racing around the tracks. I can safely say that GRIP’s own version of head pumping tracks aren’t half-bad either. The audio is great at keeping you pumped up whilst racing, and the soundtrack sounds as though it’ll stand alone well enough away from the game.

Visually the game is great. The developers could have easily decided to style the game with tech restrictions as to channel nostalgia, instead they have used modern lighting, shaders, and other modern wizardry as to go for a hyper-realistic look.  The pictures attached do not really do the game any justice, The demo I played was being run on 4K monitors, and it really made the game pop. While I cannot confirm the PS4 Pro, PS4 or Xbox One specs, I can confirm at least on the Xbox One X, the target visuals are 60FPS in full 4K. However, until the final release, we cannot say for sure if this is true 4K or some upscaling. 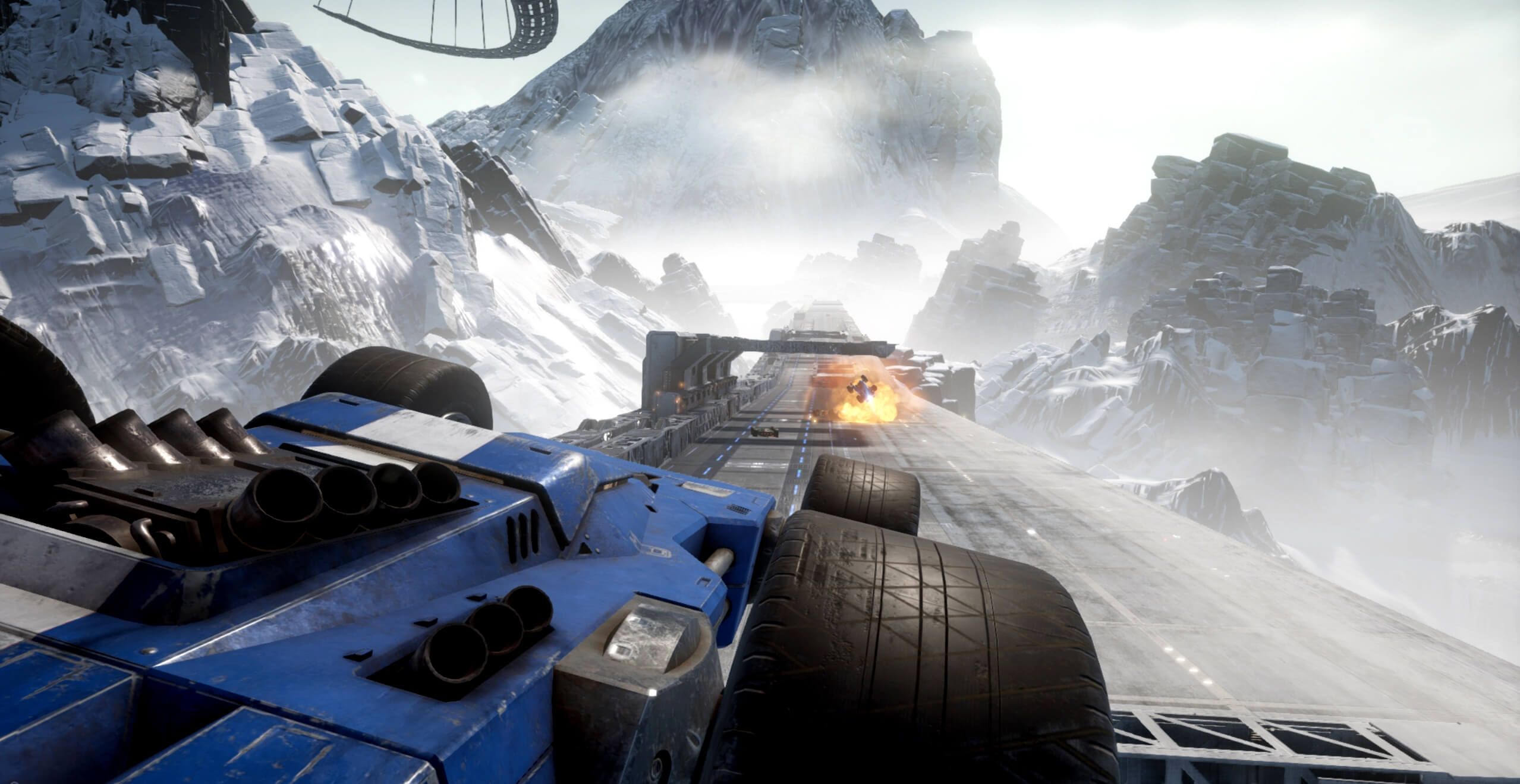 After reading all of this, you probably feel as if I am not going to give a single point of criticism, as it easy for anyone to see how enthusiastic I am about the game. Not so, after playing this game, I was spurned on to play the original for comparison. Moreover, this lead me to the only negative aspect I could come up with.

For me, the original seems to have more of an emphasis on speed, as there are moments with the original, where your brain simply just cannot comprehend the track flying past you at such a speed. This stupendous speed forces players to run on reflex, and track memory, giving a feeling similar to when you ‘hit the zone’ in rhythm games. With GRIP, while playing fast, in my playthough at least, it did seem that the gameplay had slowed down a notch. However, saying that, it could be due to my first time playing the game, so this may very well be me not pushing my choice of vehicle to its limit like the original. 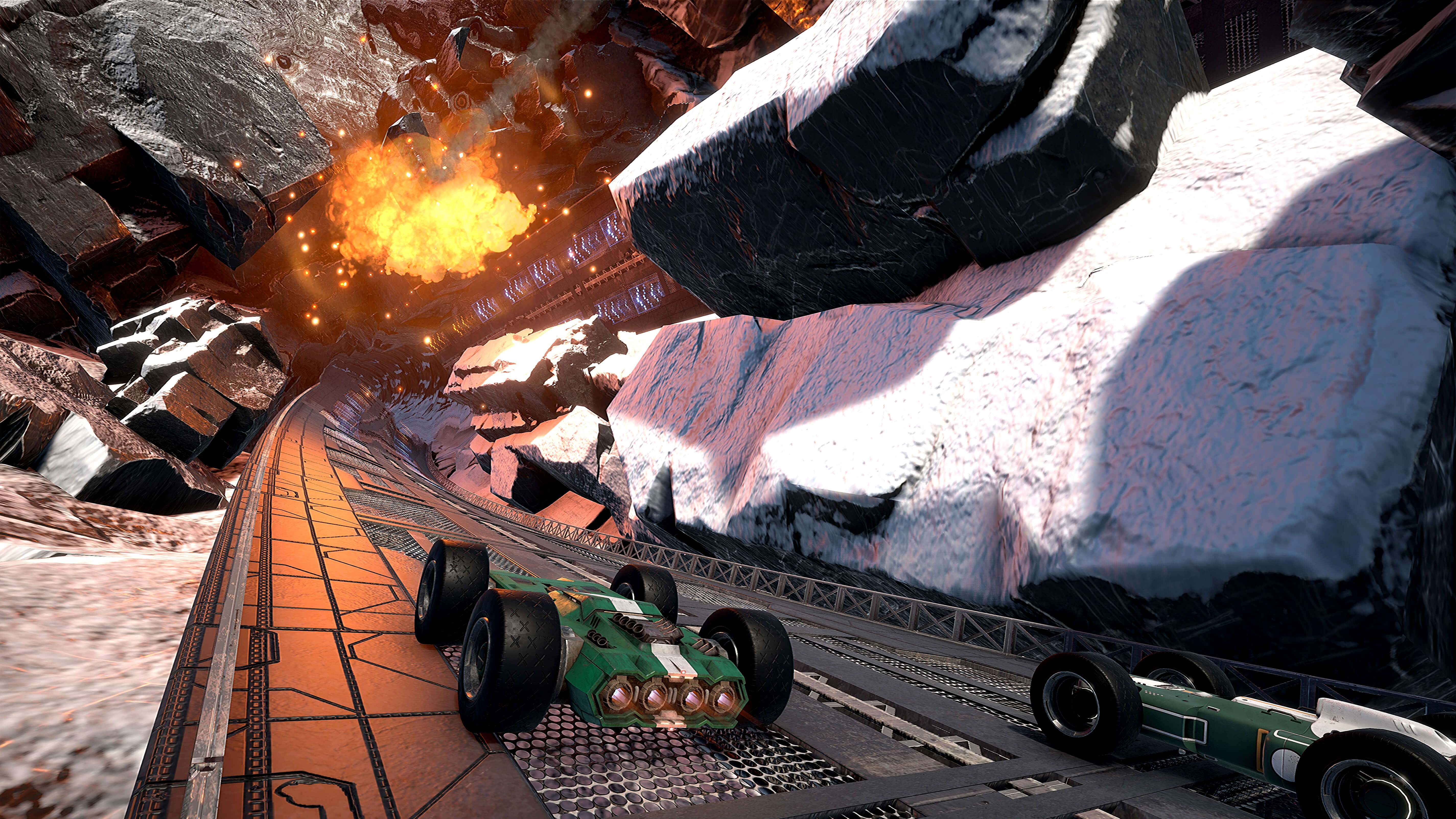 Regardless, I can say for me at least, this is to be considered a worthy sequel to Rollcage, in every aspect but its name. Whether you are racing on the walls or ceiling (literally), using your weapons to take out the other drivers, or simple pushing your reactions to the limit, this will make you smile.

I for one cannot wait to play the final product and see if it will be worthy of sitting beside its predecessor in my gaming collection.