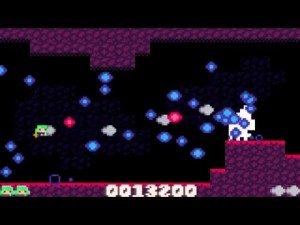 What type of game is it?
Horizontal Cave Shooter

What’s the 30 second elevator pitch?
It’s a side on shooter in a cutesy, pixel visual style. The visual style actually works really well with the inevitably brightly-coloured, bullet-hell bullets,

What do we like most about it?
It’s the art style. It’s such a simple, yet crisp style that it’s simply hypnotic. It’s a perfect match for the genre, and this manages to combine those two things in a way that it seems fresh and new. The story is equally retro, with each of the bosses already explained away by the Steampage blurb as fellow witches who have nobbled Nour’s spell books.

Anything else worth shouting about?
The music on this trailer was excellent! It sounded like something from a Kirby game – I hope that’s part of a much larger soundtrack and that soundtrack comes with the game.