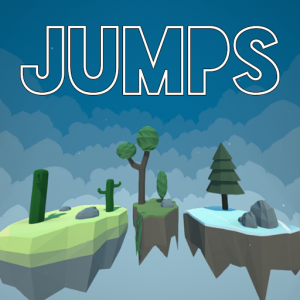 Jumps is a low-poly, first-person platfomer about flinging yourself through the air in a race to the finish.

Regardless of the pace that the trailer shows the player being flung through the air, the game itself can be played at the player’s own pace, with each of the objects that fling the player forward being interaction based or collectible items.

That said, there was a very cool moment where the player jumped onto a vertical cog, and using a gun-like booster to fire themselves backwards off of it – that was pretty cool. In that way, I suppose, the game really captures the fast paced nature of racing platformers like Sonic, where you occasionally do something completely amazing, like landing a triple-bounce across collapsing terrain, and completely surprise yourself. Much like those games, some players find themselves moving at a much more leisurely pace throughout the game – and that’s why I’m on-board with Jumps.

The current build includes four worlds, however the developers have stated that they intended to add in more worlds, levels and features pro gratis as they continue work on the game.

Jumps is currently scheduled for an early 2017 release for Windows PC, Mac & Linux.