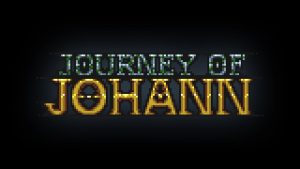 Travel through a deadly world, using your weapon to outwit your enemies, kill your foes, and also serve as a platform that you might scale the unruly terrain.

The game looks completely unforgiving in its difficulty; with rolling stone traps trying to crush you, deadly projectiles, and a mass of smart enemies. The enemies in the game will use their own weapons as projectiles, will attempt to steal yours away, and will attempt to lead you into traps — all while you have to do the same to them, while also scaling the map by using your weapon as a platform.

The latter is something that has been touched on previously, with Volgar the Viking among other games, however even in those you weren’t actually separated from your main weapon as you are in this. It’s clever, and will force you to consider your timing when enemies are closing in on your, and the only way up requires you to temporarily disarm.

I’m also quite fond of the Mario 3 style over-world map to select missions from, there needs to be more games that do that.

Journey of Johann is already ready for release; when it does it will do so for Windows PC.