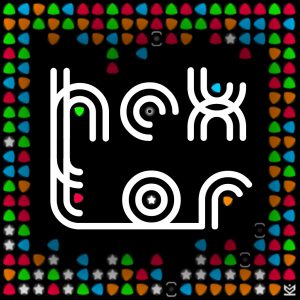 An return to the arcade origins of the match-3 (in this case 4) formula, where death is rapidly increasing, and it’s more than the icons on screen changing; as the screen’s dimension shift throughout the game.

Arcade-like games are exceptionally hard to cover, normally due to the fact that they normally focus on a hypnotic, extreme mess of garbled colours overlaying tried and tested formula. How can someone cover a game when there aren’t really new mechanics, or normally even status-quo breaking visuals on offer to discuss? Well, normally they discuss irrelevant things, their cats, or sometimes just how hard it is to discuss arcade games – as I just have.

The most interesting thing about the game is that the icons on the board, and the very dimensions of the board shift as you play through the levels. Oh – and the music for the trailer alone is absolutely fantastic.

Hextor doesn’t seem to have a release date as of yet, however when it does launch it will do so for Windows PC.