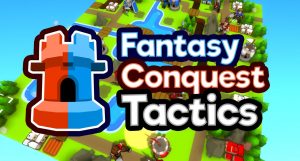 Fight across a variety of battlefields as you lead your forces to world conquest, capturing territories to buffer your forces as you liberate your way through an expansive strategy campaign with a massive variety of units to build your forces from.

Diversity of maps and unit types are the critical thing in longer strategy campaigns, with new tactics and play-styles opened up by stronger and more varied units as the game progresses.Fantasy Conquest Tactics certainly seems to have that in spades.

What I would say though, is that while this completely captures the Advance Wars style, I do prefer my strategy games to have core units or hero units in them — the attachment that this brings normally makes units and their attacks easier to remember, and also can serve to drive the story forward further than a simple land-grab-rush.

Regardless of this, FCT is charming, and seems to have a decent amount of well made content; it also has multiplayer, which is always a good selling point with strategy games as it’s often omitted due to balancing issues.

Fantasy Conquest Tactics currently has a demo available through a link on its greenlight page. The game is currently listed as only launching on Windows PC, although there’s no estimated release date, so things may change.