In Godtear, the old Gods have fallen — and their tears crash to the ground for mortals to claim; but only a select few (known as champions) have the fortitude to withstand their power. Godtear is a head to head miniatures game in which two players each control between one and four champions (plus their retinues) to roll dice, do battle and ultimately, control the Godtears and gain immortality!

Godtear was first released via a Kickstarter which was fulfilled in 2019/20 — in terms of available products, at the time of writing, there are two core starter boxes and more than ten supplemental warbands consisting of one champion and between two and six followers. When considering your purchase, you should know that each starter set contains a board, tokens, ten dice, two opposing champions, cards to support them, three player dashboards and a rulebook. 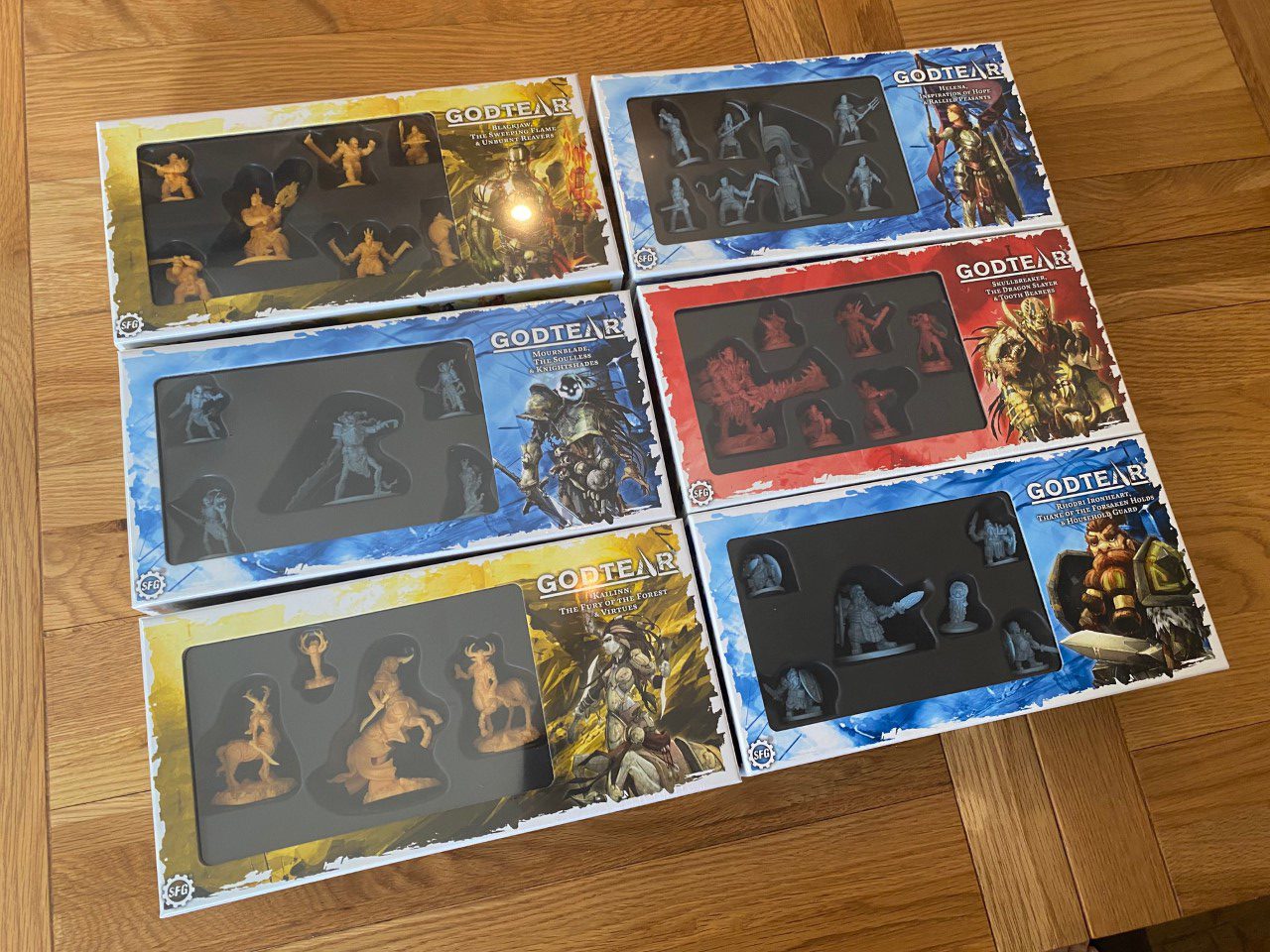 Because a “standard” game is played with three champions on each side and starter sets only contain two, you do need to buy more than one starter box in order to get the full experience — and realistically you need both starter boxes and two additional warbands. I have both starter sets and six separate warbands, and with a total of ten champions to mix and match, I can say that there is plenty of replayability here — plus there are several champions I could still buy if I wanted to.

When set up, Godtear is quite the visual tour-de-force. The boards are large, six-leafed affairs that come with rich, detailed artwork and clearly defined hex-spaces. If I were nit-picking, I would suggest that the artwork shows obstacles such as ravines, logs and boulders which serve no gameplay purpose and make little thematic sense. Up one side of each board, you’ll find a gauge to show the flow of battle — and this works on a tug-of-war system that I’ll explain later. 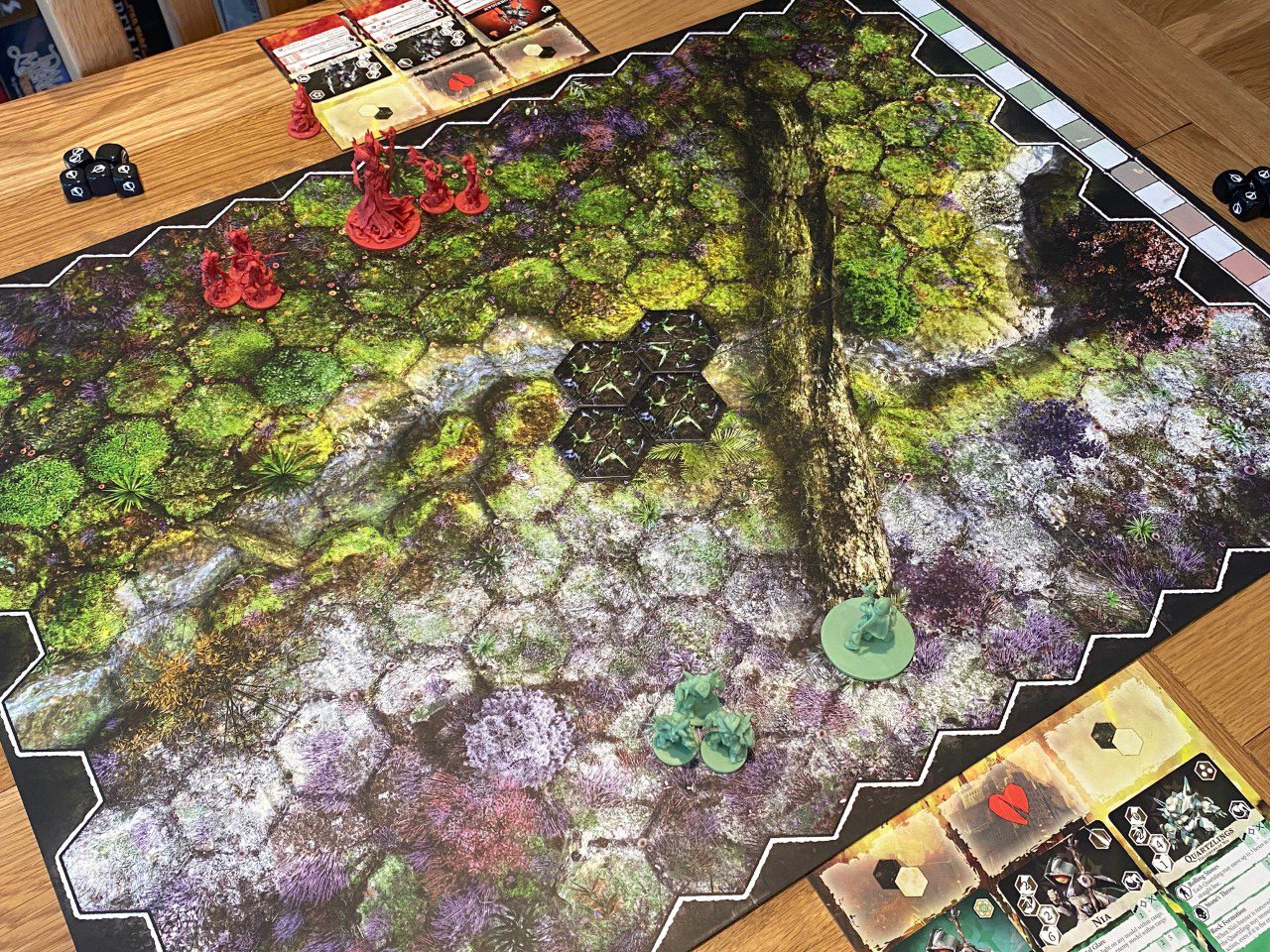 The real stars of the show here are the miniatures. Each champion is a large model that is rich in detail and character, offering a tempting prospect for those who like to paint. The retinue that supports each champion is often made up of more, smaller miniatures, however in most cases these are still good scale and well detailed, with a few (such as the centaurs I have pictured) just as impressive as their champion.

Each warband comes with three cards — one for the followers and two for the champion. The follower card and one of the champion cards work in the same way — as reminders for what each can do during the Plot and Clash phases that form the structure of Godtear. The second champion card simply details that champions once-per-game ultimate skill, which when used, causes this card to flip to its other side. 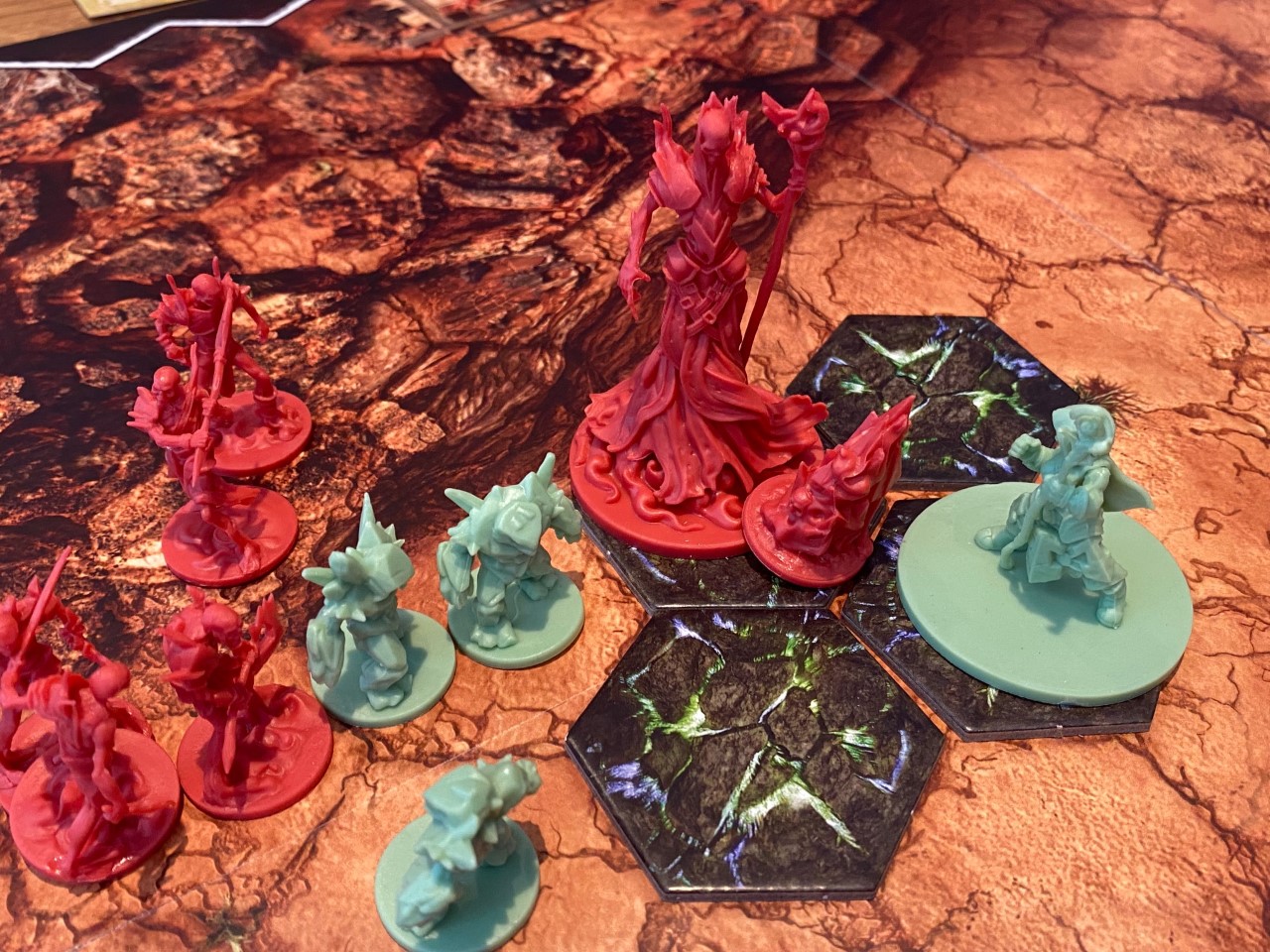 Every champion and their associated warband has a specific focus (as depicted by their colour). These focusses are maelstrom, guardian, slayer and shaper, and broadly, each has a skillset that matches their focus. Maelstroms are built to defeat enemy followers, whilst slayers specialise in defeating champions. Shapers apply buffs and debuffs or move elements on the battlefield, whilst guardians offer powerful defensive abilities.

One of Godtear’s most important features is the scoring system, and this links directly to the focus of each warband. Each game of Godtear may comprise up to five rounds, with victory in the first and fifth rounds worth one point, victory in the second and fourth worth two points, and victory in the pivotal third round worth three points. To actually gain these points, players “tug” the scoring marker up and down a track towards them by claiming Godtears with their banner, or by defeating enemy miniatures — with bonus points scored by specific warbands based on their focus. 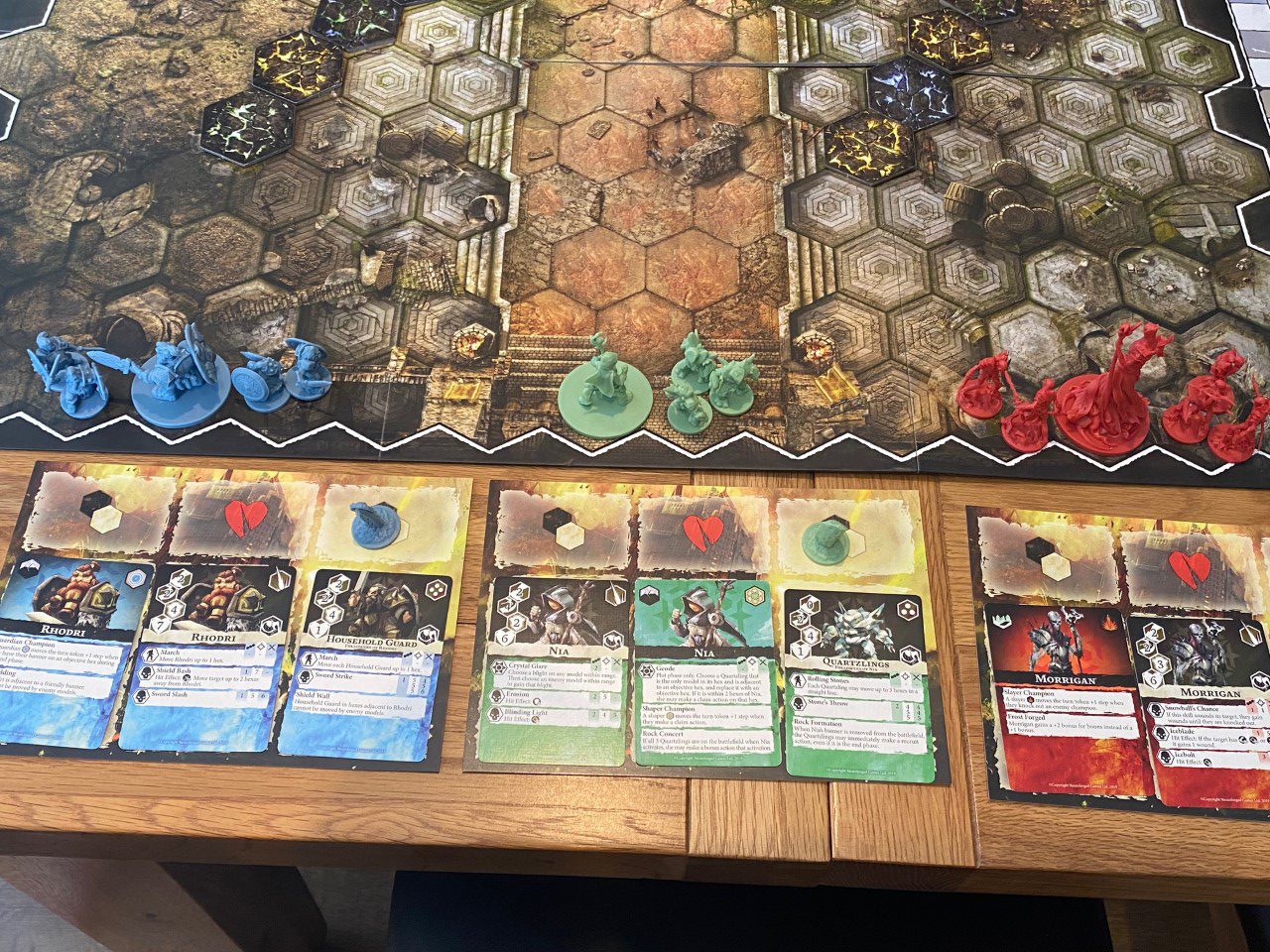 To bring this to life a bit, let’s just imagine that Titus — a maelstrom — has just used his attack to strike down one of Finvarr’s minions. This would normally cause the score marker to move one space towards Titus, but because he is a maelstrom, he moves it two instead. Finvarr is a Guardian, so he gains five moves on the score track (instead of four) if he can score his banner on an objective in the end phase of a round.

This, as the four-point base value suggests, is harder than simply killing a minion (or even a champion) and can only happen once per round, so it requires some setup. Thankfully, Finvarr has several abilities that allow him to change the position of his banner after it is placed, and even to move the enemy champion (who could crush his banner if they got close enough). So, whilst Finvarr might have lost the battle when his follower was killed, he may yet win the war if he can outmanoeuvre Titus. 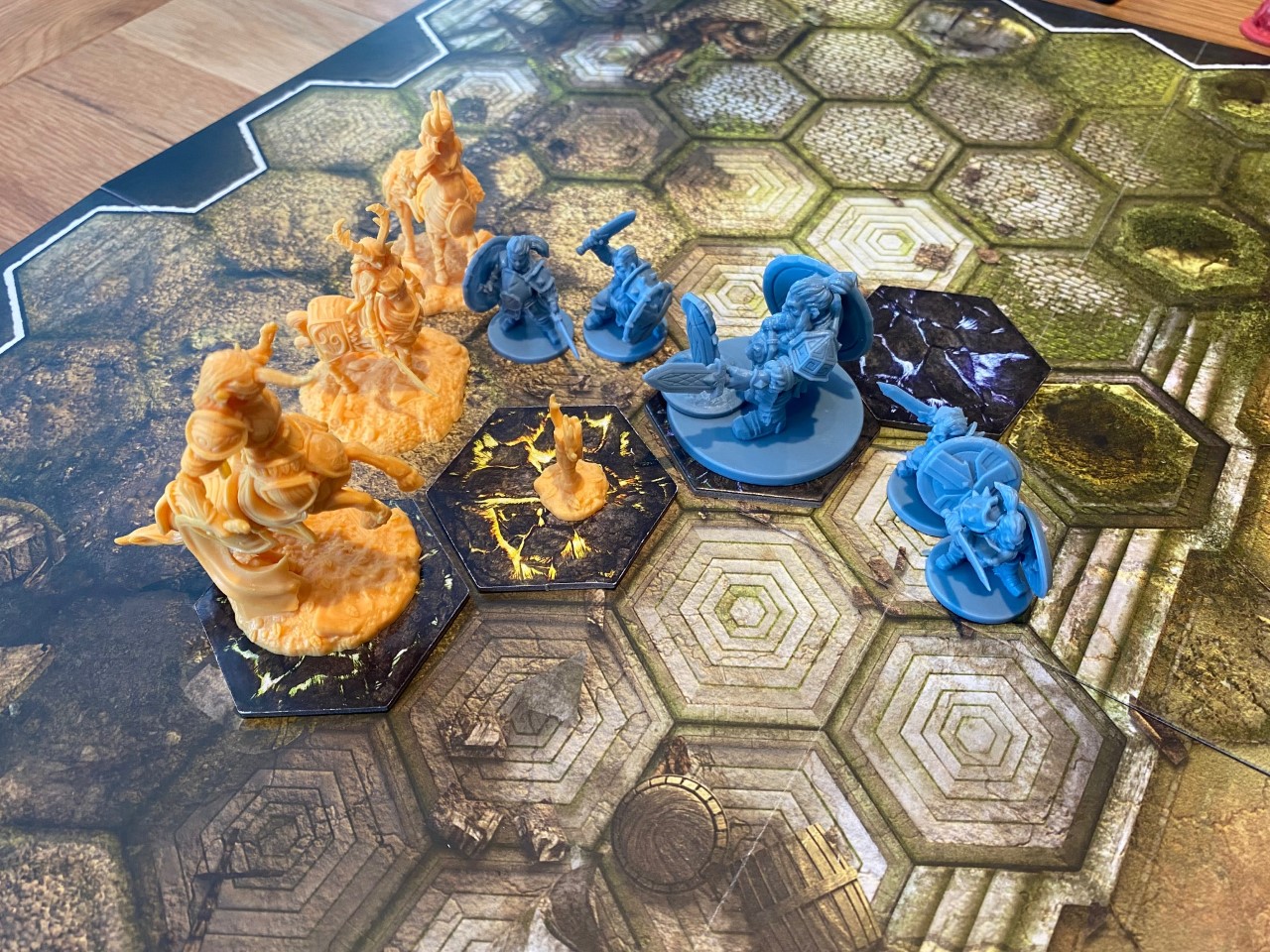 If you take this concept and expand it to include three (or even four) warbands on each side, all of whom bring unique abilities and focusses to the table, then you can really get a feel for what Godtear is all about. Players can choose to have a team entirely made up of warbands from one focus, or they can mix and match in any other way that works for them. It really is entirely up to the players to decide, yet in choosing their “team” there’s little or no complexity. You won’t be building decks or comparing points value — you’ll just choose an equal number of warbands on each side and dive in.

Structurally, Godtear is fairly simple. Each round is split into Plot and Clash phases, which play out in a relatively similar way. During the Plot phase, the first player will perform the actions shown on the Plot phase side of their champion and follower cards, or perform basic actions like move or recruit (which allows defeated followers to return). After the first player has done this for all their units, the second player will do the same. 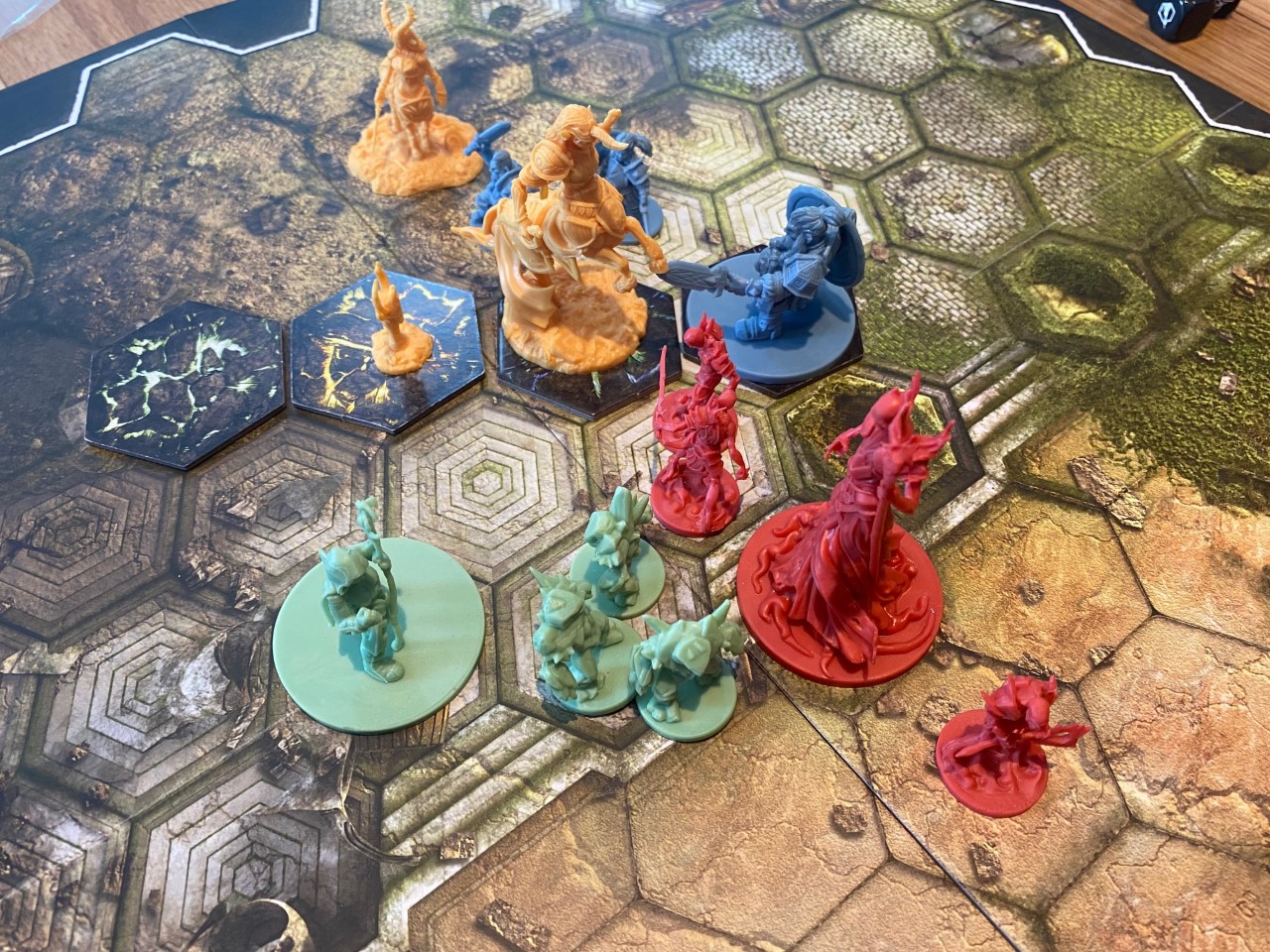 After this, the Clash phase is resolved one card at a time — I say card because each follower must take the same action at the same time, so if you have five minions with Titus (for example) and you move them, then even though those miniatures might be split all over the board, they must now all move (or opt not to move and forfeit that action). Usually, each card will take two actions during the Plot phase and two during the Clash phase, but some actions grant up to one additional action.

Buffing and debuffing plays a huge part in Godtear, which is in no small part due to the fact that most combat is determined by dice rolls. In general, an attack will roll a set number of dice with the intent of scoring hits. Hits are then compared to an opponent’s dodge value, and if the number of hits is greater than the dodge value, then another set of dice will be rolled to assess damage. This is then compared against armour, with any excess hits (after reduction for armour) converting to wounds. Most champions take four or more damage to hit, whilst small followers are always killed with one hit (there are some large followers who take two). 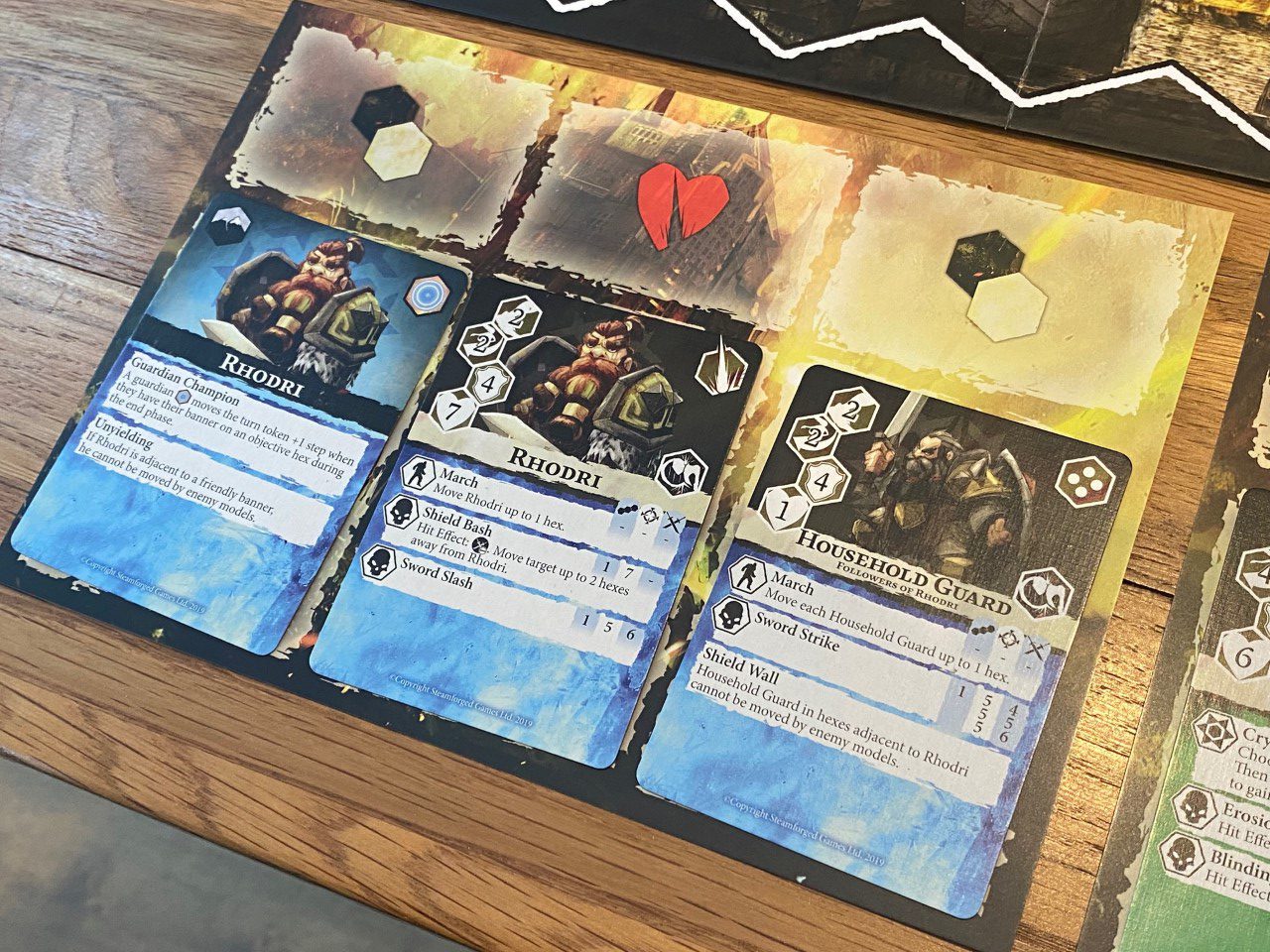 You can imagine then how any action that adds a benefit to dodge or armour is important, as is any skill which reduces your opponent’s accuracy. This is where guardians (and to a lesser extent shapers) come into their own, because whilst dangerous at times, an unsupported slayer or maelstrom can become vulnerable against an opponent that either debuffs them or defends their own units with powerful effects.

There are a number of ancillary features that make Godtear even more interesting. For example, if a champion is killed, it simply results in a points swing in favour of the opponent and a lost action for that champion (as they stand up again). There’s also a feature where the losing player in each round can make a change to the battlefield depending on the scenario — this might be to add, remove or move one of the Godtear spaces, and because minion models can’t step on these, this could divide enemy forces, or simply make an objective easier for the losing player to capture in the next round. 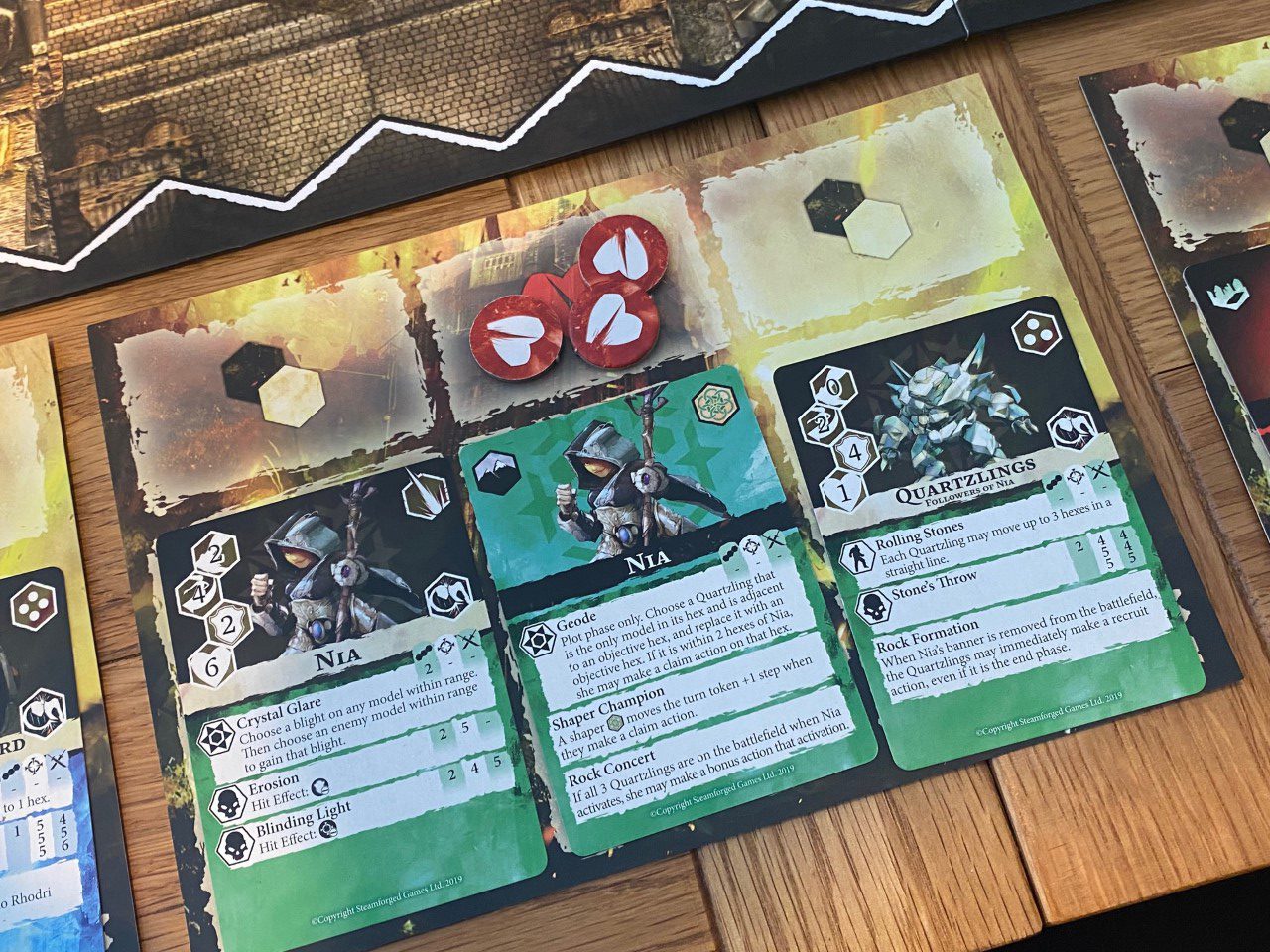 On the downside, I have found that games which begin with strong turns for one player can be very difficult for the other player to recover from. Even though the first round is only worth one point in itself, the battlefield remains the same in terms of miniature positions, buffs and debuffs, and in particular if a champion falls early, it’s hard to recover from. Dice rolling is well known as an unforgiving art as well, and some games will be lost simply because of bad luck — although most people accept this as a common challenge in miniatures games.

Despite some minor trappings associated with basically all miniature games, Godtear is a beautiful, crunchy, super aggressive duel that uses a subtle yet innovative scoring system to ensure constant movement in a genre that often stagnates and drives “boring” behaviours. Godtear feels as though it is constantly moving and shifting as each game goes on, and thanks to the tug-of-war system, it remains exciting until the very end — and where one side has a distinct advantage, it simply ends after three rounds (about half an hour). 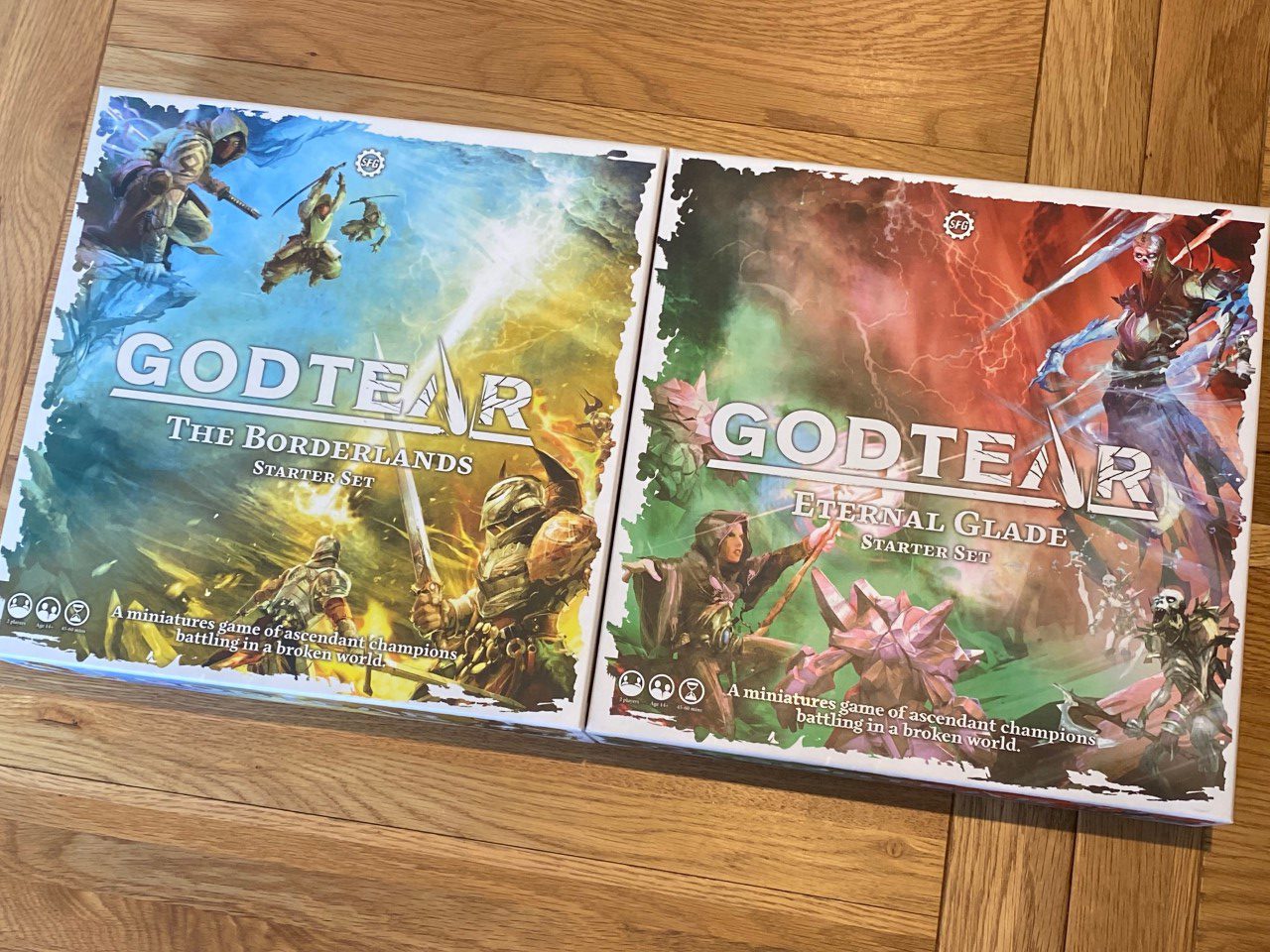 The production quality is fantastic, and whilst it’s a bit annoying that you’ll need to buy both starter boxes to access six dashboard cards, the value offered by the boards, extra dice and warbands that you’ll get will make it worth it for anyone who enjoys the basic concept. Those who really dive into Godtear will find themselves rewarded with a huge number of warbands already available, and painters will be in absolute heaven. A really nice addition to the head-to-head miniatures game scene.

You can purchase Godtear Eternal Glade and Godtear The Boarderlands on Amazon.