Almost four years ago, I reviewed DOOM: The Board Game, and at the time, I didn’t think I’d ever see a better implementation of a video game in its board game counterpart. DOOM: The Board Game was damn near perfect at capturing the frantic and brutal combat of the 2016 reboot, but even that comes nowhere near the thrill of setting up a six, seven eight or nine card combo in Devil May Cry: The Bloody Palace.

What is particularly strange about how good Devil May Cry: The Bloody Palace is, is that basically no one has heard of it, and whilst you probably haven’t heard of designer James M. Hewitt either, he is at least partly responsible for the 2016 Blood Bowl reboot, Hellboy, Blitz Bowl and several other Games Workshop games and systems. 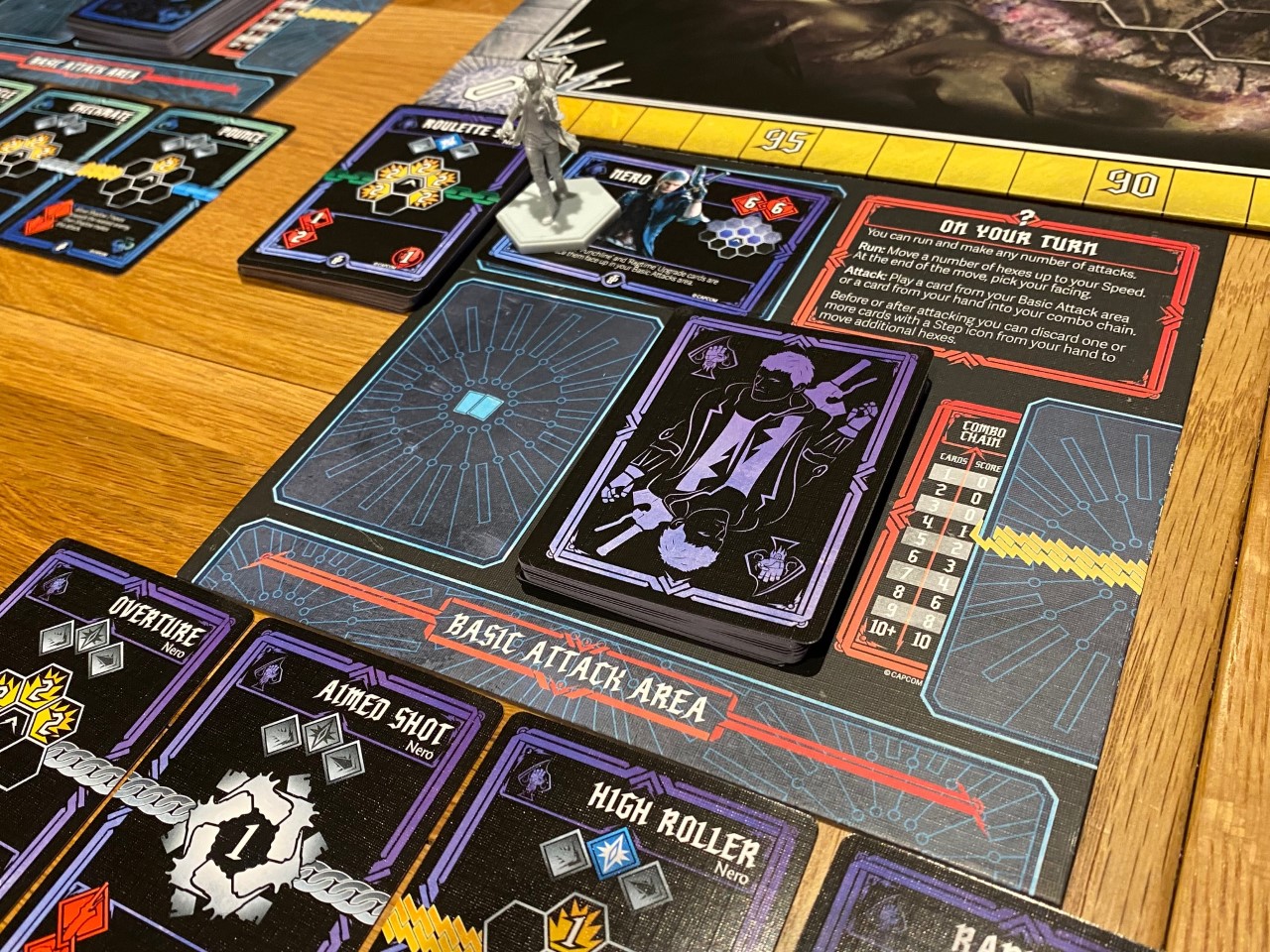 This relative anonymity may be because Devil May Cry: The Bloody Palace is published by Steamforged Games, the same folk who did the Dark Souls game. Sadly, whilst Dark Souls looked incredibly exciting prior to its launch — with tons of miniatures and expansions leading to huge Kickstarter — interest cooled rapidly once players had spent time with the system. Trading sites swelled with used or even unopened copies, and prices for such a gorgeous heap of plastic and card sunk to twenty or thirty quid. 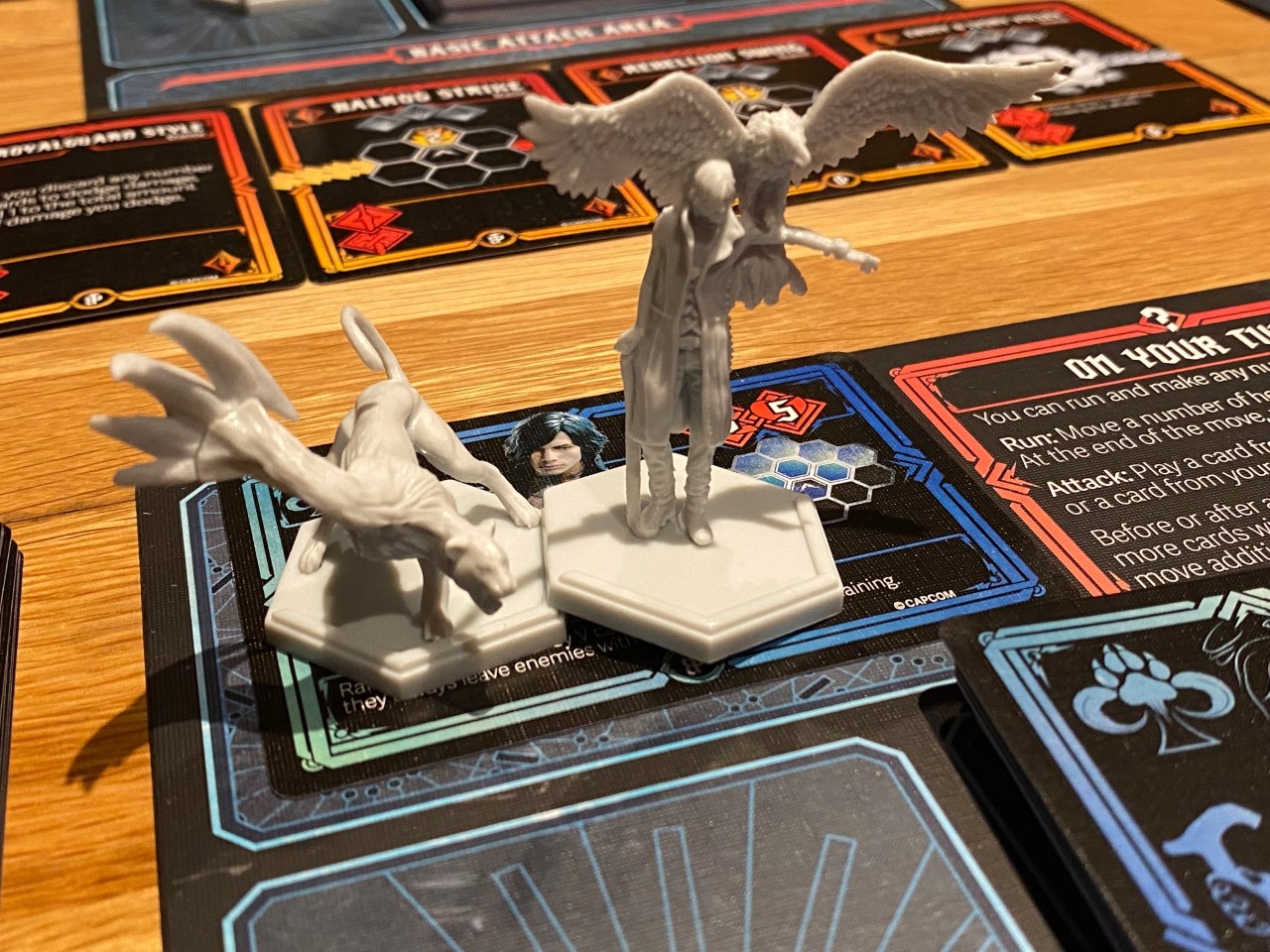 Unlike DOOM: The Board Game or Dark Souls, Devil May Cry: The Bloody Palace is definitely not a dungeon-crawler. It’s an arena combat game with miniatures, built on an asymmetric deck-building and hand management mechanic. Say what? Yes, in short, you’re going to be building a deck for your character (like Nero or Dante) over the course of the game, and each turn, you’ll be optimising the cards in your hand and among your basic (always available) cards to create the most stylish combinations.

Why do I keep talking about style? Well that’s simple — at the end of each game of Devil May Cry: The Bloody Palace, usually following three “floors” and then a boss fight, the winner will be the player who scored the most style points. Not the one who killed the most baddies, not the one who defeated the final boss, the one who did whatever they did, in an aesthetically appealing way. Well, all of that, plus there are some achievement cards worth say two, three or four style points each that can also help to decide the winner. 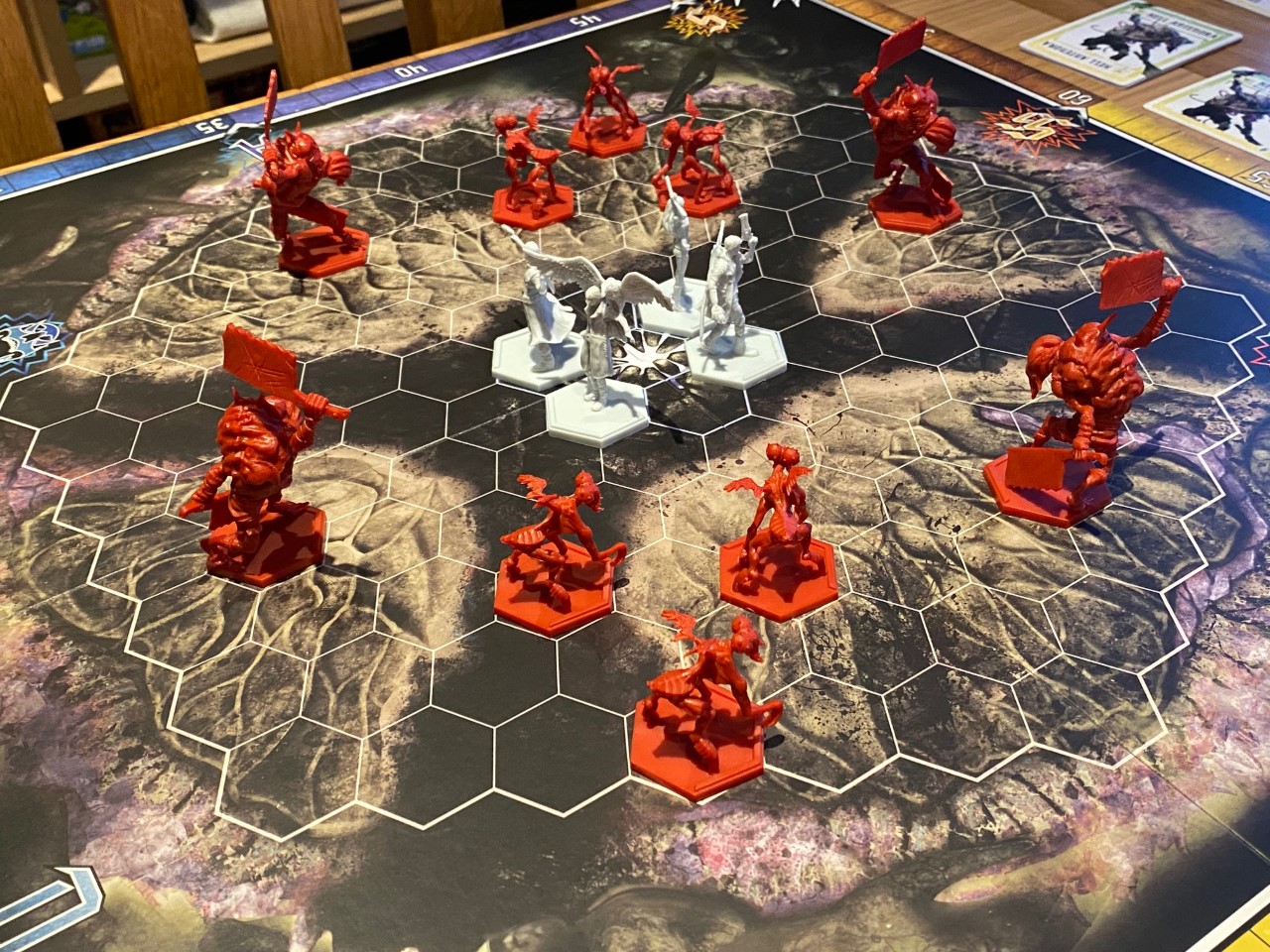 The approach that Devil May Cry: The Bloody Palace is not only perfect in terms of how it links thematically to the DMC style of play, but it’s also just such a unique, refreshing and rewarding system for a board game in its own right  — and it’s so, so clever. To try and explain why, I’m going to talk you through part of a turn — so bear with me.

Let’s look at one of Dante’s turns, since Dante is a character we’re all familiar with. Dante has four basic attacks that he can open a combo with, and five cards in hand. Firstly he moves towards an enemy (he has movement of five) and then he opens up his attack with a Rebellion Swing card, which simply deals one damage but begins a “blue” combo. Dante can now follow up with another blue (or grey, which pairs with anything) card, and then continue with as many cards as he wishes, as long as they match the colour on the previous card (which will almost always be blue, now). 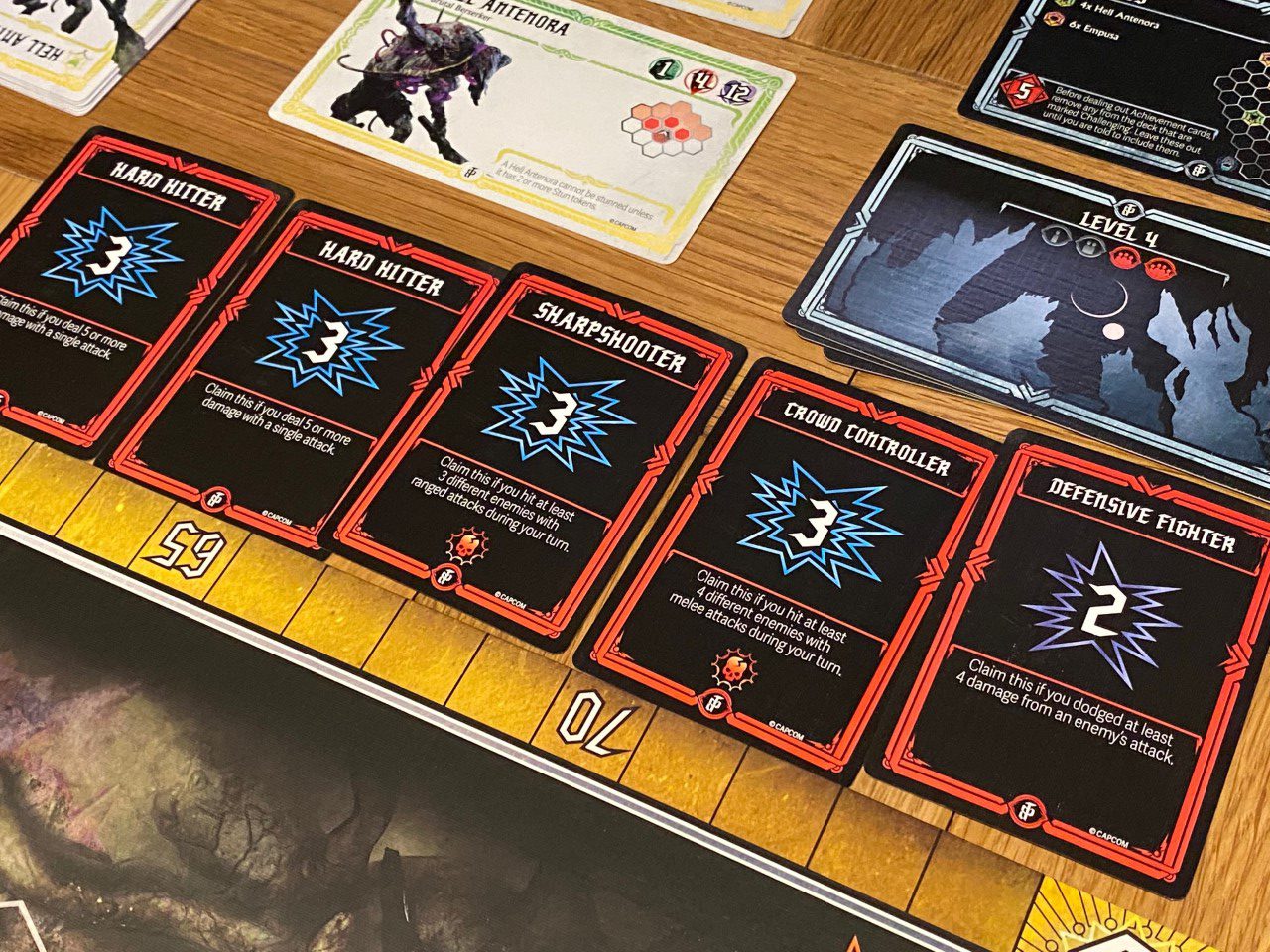 Dante’s Rebellion Swing did one damage to the enemy, so you put a one damage token down. His Rebellion Cut Right then deals two damage (plus one to an enemy to the right of Dante, if there is one) and it knocks the target enemy back, and allows Dante to follow up. His Rebellion Cut Left does the same, but in the opposite direction. Each of these attacks does two damage (making one, plus two, plus two for a total of five.) This doesn’t quite kill the enemy, so Dante uses his Coyote A-Shot (which is grey) to deal two more damage and defeat the enemy. This is a four card combo, and is worth a meagre one style point.

In another example, let’s say you’re playing with V — perhaps the most complex of the characters to learn. V has four basic attacks, but one of them is only used to summon his sidekick, Shadow, whilst another moves Shadow. V therefore only has two basic attacks which are used to start combos. To make matters worse, Shadow does most of the damage for V, but he can’t make any kills — only V can. This means you’ll need to manage Shadow and V together, on the same turn, to tee up enemies (using Shadow) that V can then kill. 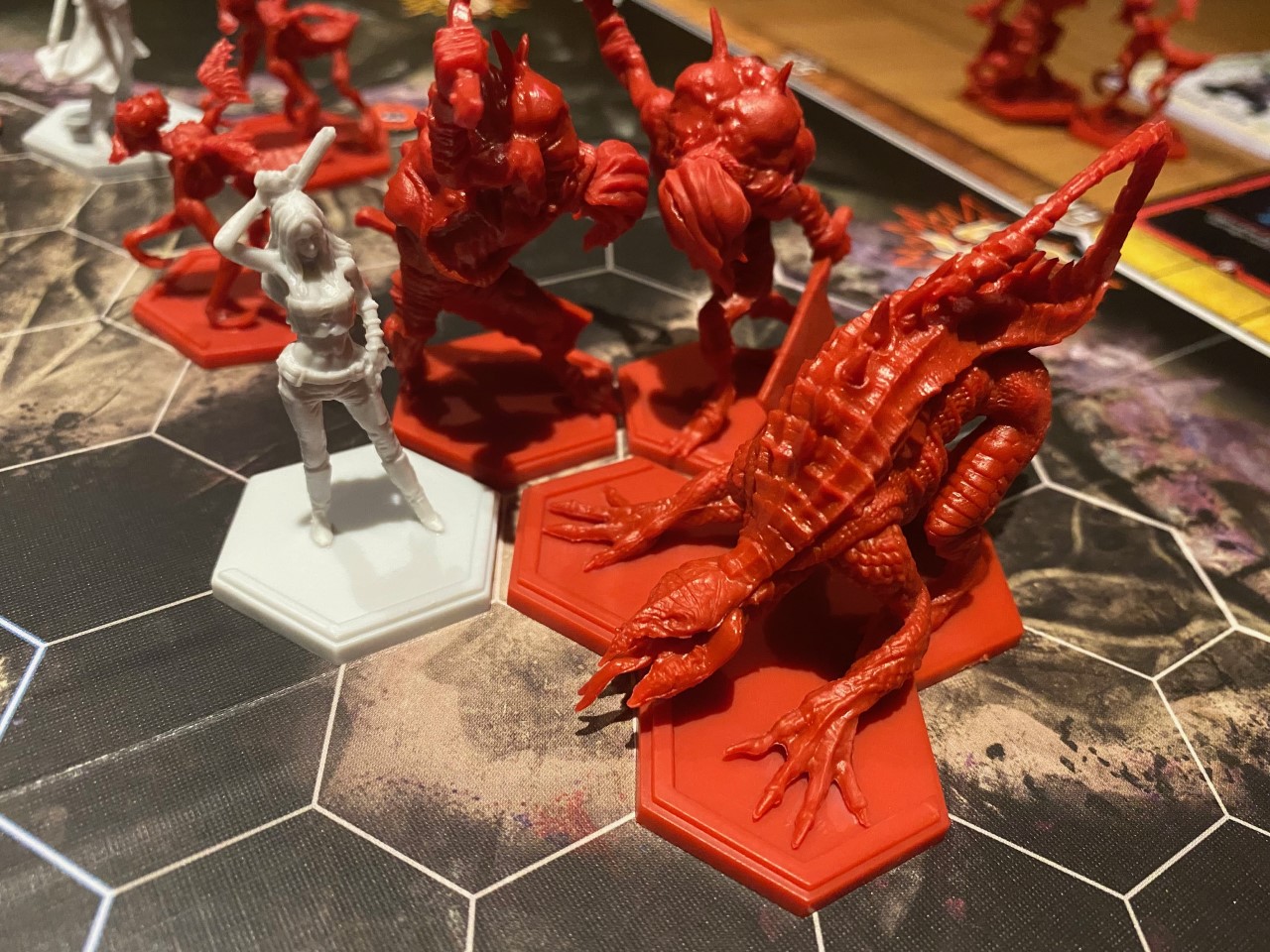 To go back to the Dante example for a moment, just because Dante killed that first enemy, it doesn’t mean his combo is over. He could carry on performing attacks that allow him to dart to another enemy, if he had the cards. The key thing here is that a combo only scores when you want it to (and only once per turn). In this example, if Dante had wanted to score a combo after killing the enemy above, he could, and then he could start a new one — and any cards placed would stay on his board to carry over to the next turn.

So to kind of try and explain this more simply now that you have that example with you – a four card combo is the lowest combo that scores. The reason for that is simple — because you’re supposed to be maximising your combo across multiple turns, and by developing your deck over the course of each game to include cards that allow more and more powerful effects – like card draw. Without those cards, a character like V would be impossible to play with, due to how limiting his basic attacks are. 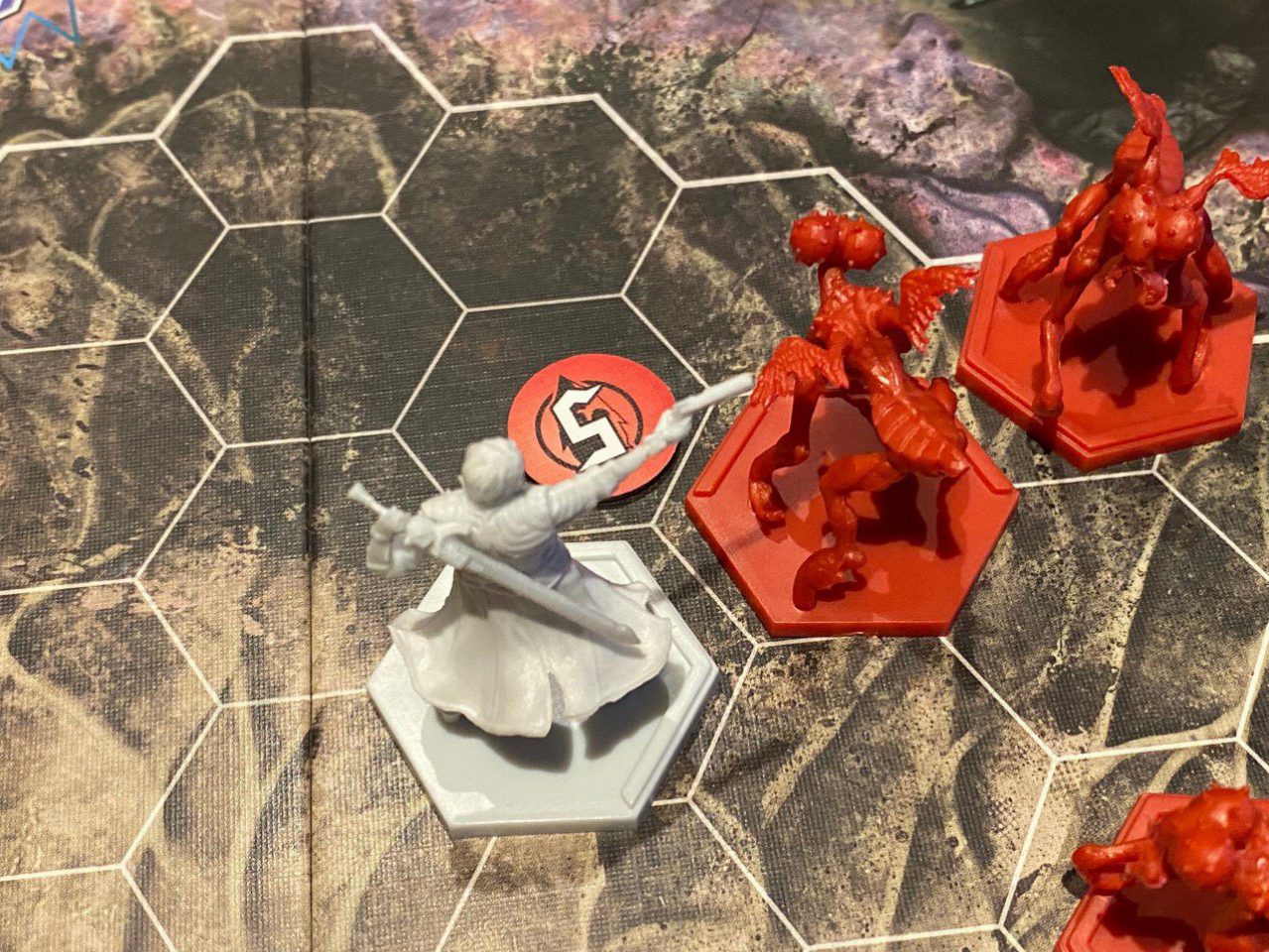 This is where the deckbuilding element of Devil May Cry: The Bloody Palace comes into play — and it’s linked to the same red orbs that you see in the video game. Each enemy drops red orbs when killed, and each player character has a deck of about twenty odd upgrade cards worth one or more red orbs each. At the end of all the player turns and after the enemy phase, players can spend their orbs (collected only once stepped on) on upgrades.

As a result, Devil May Cry: The Bloody Palace has a very fast pace to it, even within its own space. At the end of turn one, at least three out of the four players should be looking to upgrade (with at least one or two orbs each) and as a result, everyone should be out for the kill right from the outset. I love this about Devil May Cry: The Bloody Palace — it is super aggressive, and the starter decks are very competent, but the upgrade cards are fantastic, each one of them offering new and exciting ways to carve up the enemy. 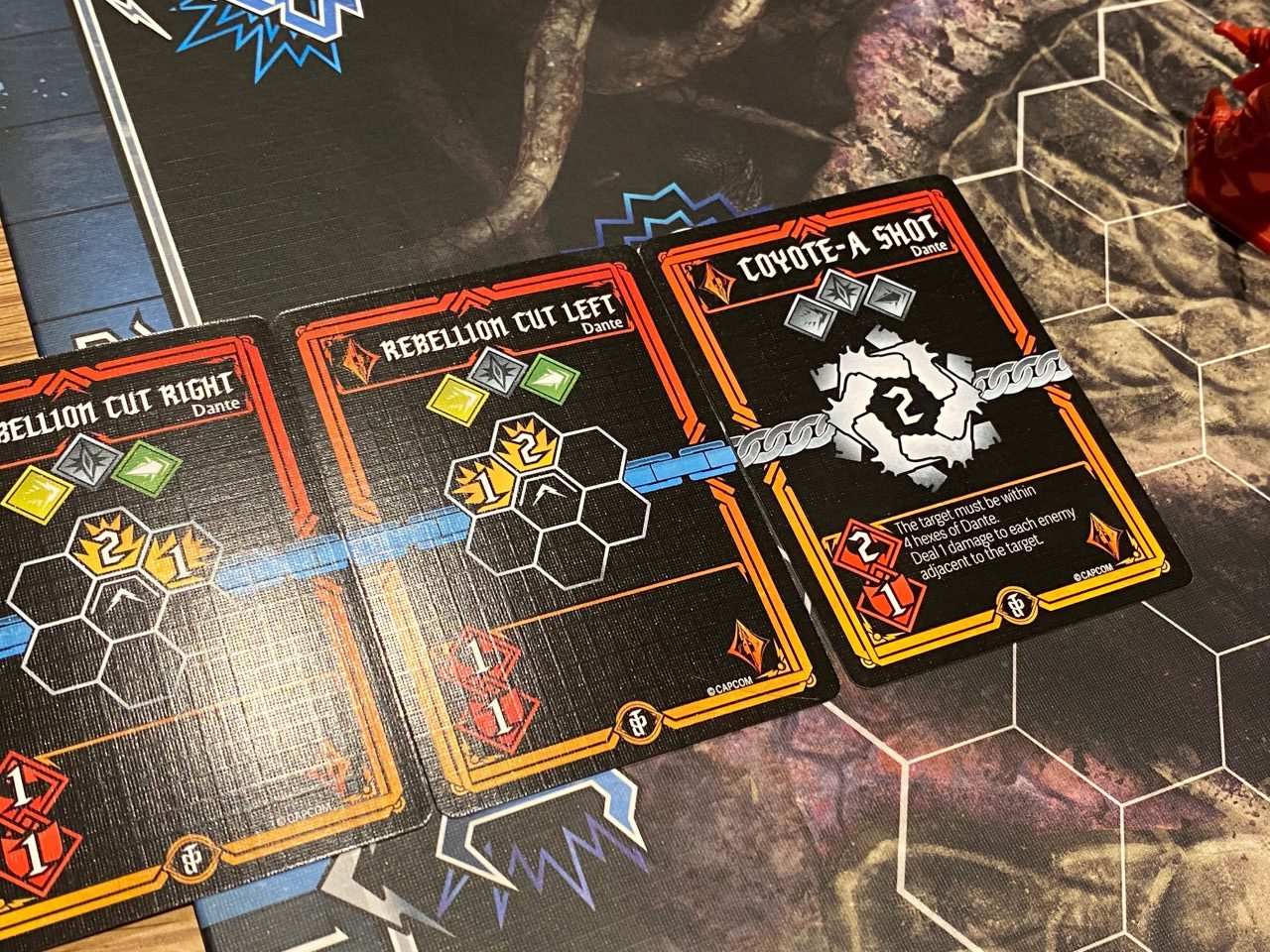 I also really enjoy how different the four hero characters are in the base game. Dante has four different fighting styles to work through, with a default style to begin with, and three others that change his characteristics. Trish has no special ability really, but her deck is more powerful on a card by card basis, and V has Shadow, offering him a unique style. Nero is a decent jack of all trades, but a lot of his cards allow him to manipulate his deck (and pick cards out of it) from the outset, which is rare and powerful compared to a random draw.

With the fantastic but not overdone miniatures, the very tight mechanic gameplay and the superb balance between deck building, hand management and on-board aggression, Devil May Cry: The Bloody Palace is a superb game. In fact it’s possibly one of the most underrated or possibly misunderstood games I’ve played in a long time. If you’re a fan of the series then you must check it out, but even if you’re more of a board gamer and the videogame doesn’t appeal to you, then the clever systems in Devil May Cry: The Bloody Palace are worth exploring. Very highly recommended.

You can purchase the Devil May Cry: The Bloody Palace on this website.