Get Packed is another couch co-op about moving, but slightly more intense

You probably know that we play a lot of couch co-ops in our household. With a family of five people who love games, we spend quite a lot of time playing video games together and one of our favorite things to do is play couch co-op ones. Now, when we saw Get Packed, we instantly thought of Moving Out — one of our favorite games — and wanted to see if this game was similar or different!

At the start of Get Packed, you are presented with a completely voiced story about capitalism, a town being purchased by a salt mind, and a reasonable reason why everyone needs as much of their stuff packed up as quickly as possible. You and your friends are the ones that need to take on the job.

In each level, you are presented with a building packed with items. Sometimes, there are more than one building, even. These buildings are full of items and you can take basically everything out — beds, paintings, washing machines, bookshelves — literally everything as long as you pick it up and put it into the truck. There isn’t anything you specifically have to take, but figuring out the high value items and getting those moved first will give you a higher score at the end of the level. 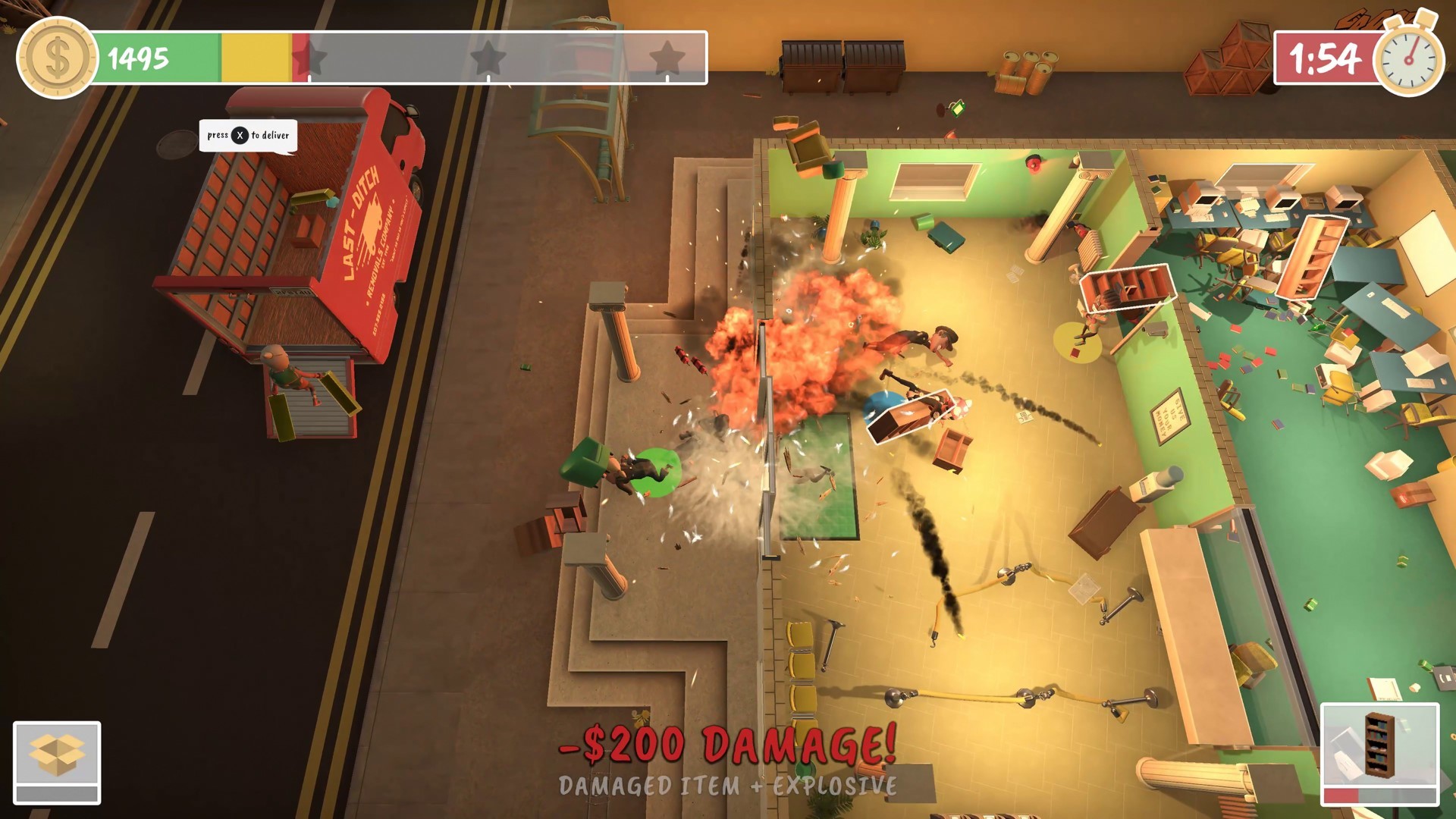 When you take an item to your delivery van, your arms are quite ragdoll-like. You end up flailing around the items, smacking them on door frames and into other people who might be walking around. This can damage them, which ends up being negative when it comes to your score. Some items break into pieces, forcing you to collect little bits scattered around. Others explode. On the bottom, right hand corner of your screen you can sometimes find items that the client really wants, but you will need to pack them up neatly and send out the delivery van — that’s the only way to bank your score — and the van does take some time to get back to reload.

If your item is particularly big, you can sometimes pack it into a box, but these do open back up after a while — so you will need to pay attention and use it wisely. As time goes on, and you make it through more houses, you will be given more stories about capitalism and about how you are suddenly robbing a bank, for your own gain, etc. It’s a wild ride. 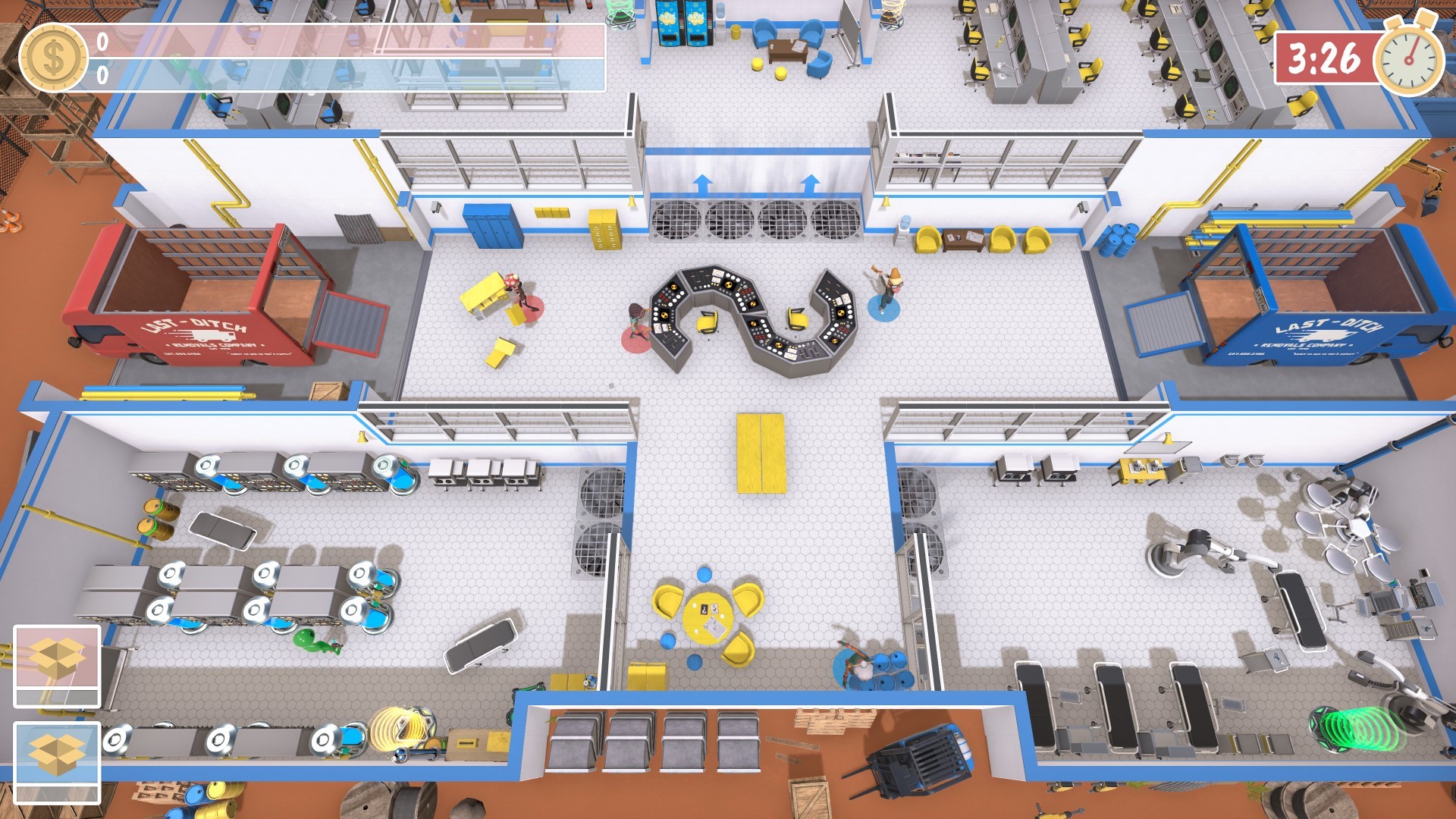 When it comes to the gameplay itself Get Packed does punish you for breaking items, so it’s not a game that smaller children are able to pick up easily like Moving Out — as they will literally break items which will cost you the game. This game also doesn’t scare too well to two player mode, and seems to be more focused on having all four players. Dann and I found it challenging to get more than two stars in most levels, and sometimes hard to get more than one. The levels — much like Tools Up — actually show you a new mechanic each level, just to toss it away the next, which is something I am learning to hate in games. I just don’t see the point in being shown a new cool thing, to use it for just one level, and then move on.

Get Packed does feel like a more challenging, teeanger / young adult level game for those who like Moving Out, which is quite fun, and I do like the challenge. I just wish I had more friends who could come around and play it with me!

You can find Get Packed on PS4, Xbox One, PC and Google Stadia.