A game of dice, memory and to a decent extent luck, Die of the Dead catches the eye thanks to its beautiful production value celebrating Dia De Muertos — the Day of the Dead. Unusually, in picking up my review copy of this game, I was also able to meet the design and publishing duo behind the game — James Allen and Mark Stockton-Pitt.

I met James and Mark in a pub near our respective work and home locations — somewhere in the heart of rural North Yorkshire. Whilst it was James who came up with the original concept for Die of the Dead, it was when he pitched it to Mark that the final vision came to fruition. I immediately gained an insight into this design process when — much to both James and my surprise — Mark began to unpack printed components for an expansion he had in mind. 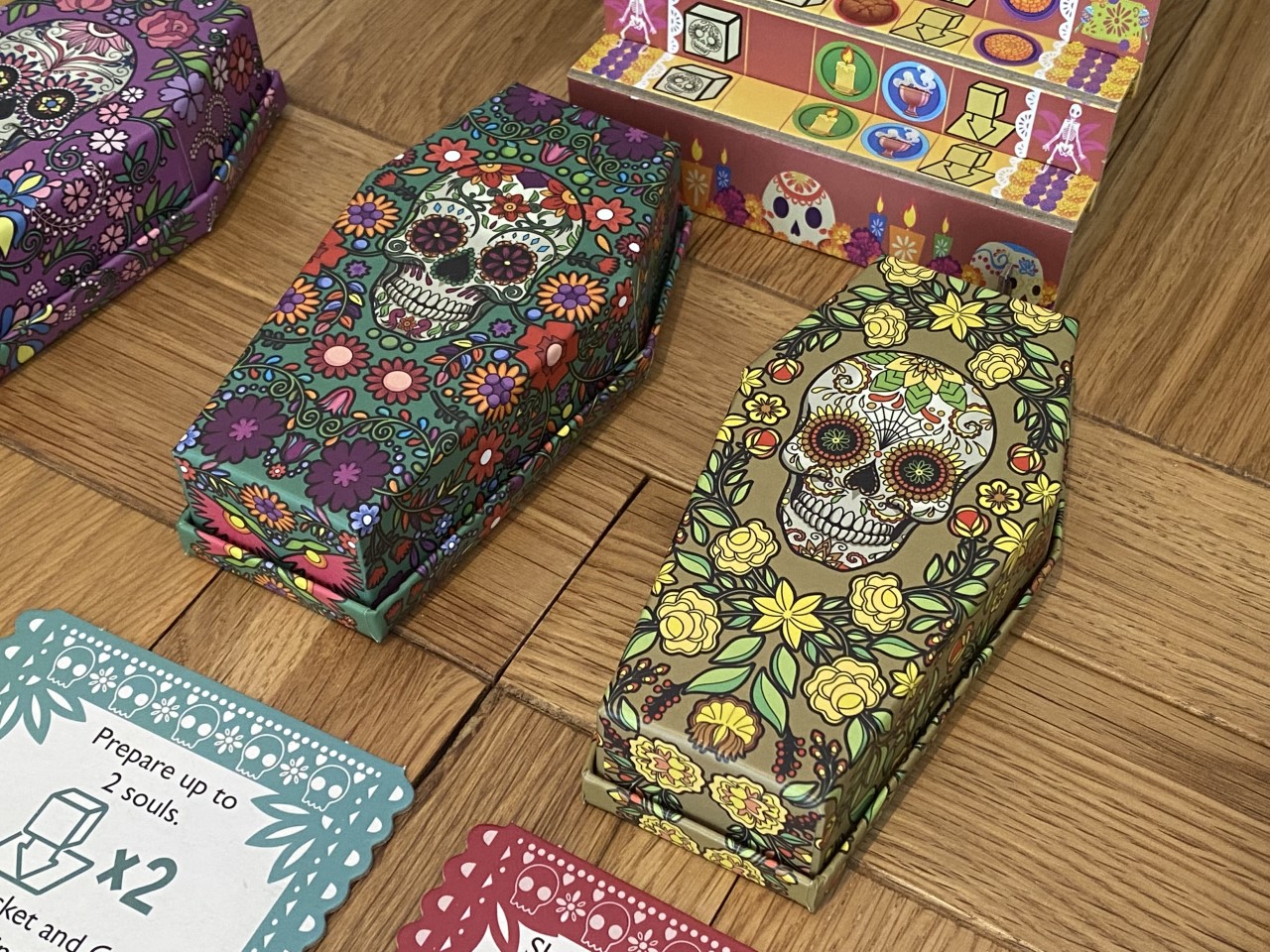 As it transpired, we spent an hour or two that evening playtesting Mark’s new idea, which as it turns out is very different to the base game. Mark and James described Die of the Dead to me as a “random output game” whilst in the variant he wanted to show us, it would be transformed into a “random input game”. The desire to create a new mode for Die of the Dead was partly in response to other reviews — and for my part as a reviewer, it was interesting to see first hand how feedback affects a design team, and the creative process that follows.

Since meeting with Mark and James, I’ve had the chance to play numerous games of Die of the Dead in its standard mode, and with each play I’ve enjoyed it more and more. The basic principle is simple — choose a colour of die (which represent souls) and then outmanoeuvre the other players by manipulating dice among beautifully decorated caskets, ultimately reaching the fourth casket and exiting it onto the Marigold Staircase. The first player with nine souls (dice) on the staircase, wins.

With the four caskets laid out and a specific action linked to each one, the players take turns to activate one casket. The first (leftmost) casket is always open, whilst the other three are closed. The actions are quite detailed, but the first casket allows the player to to put dice into the first casket (choosing from either up to three prepared souls, which require a prior action to have been completed, or one free soul, which comes straight from your pool). 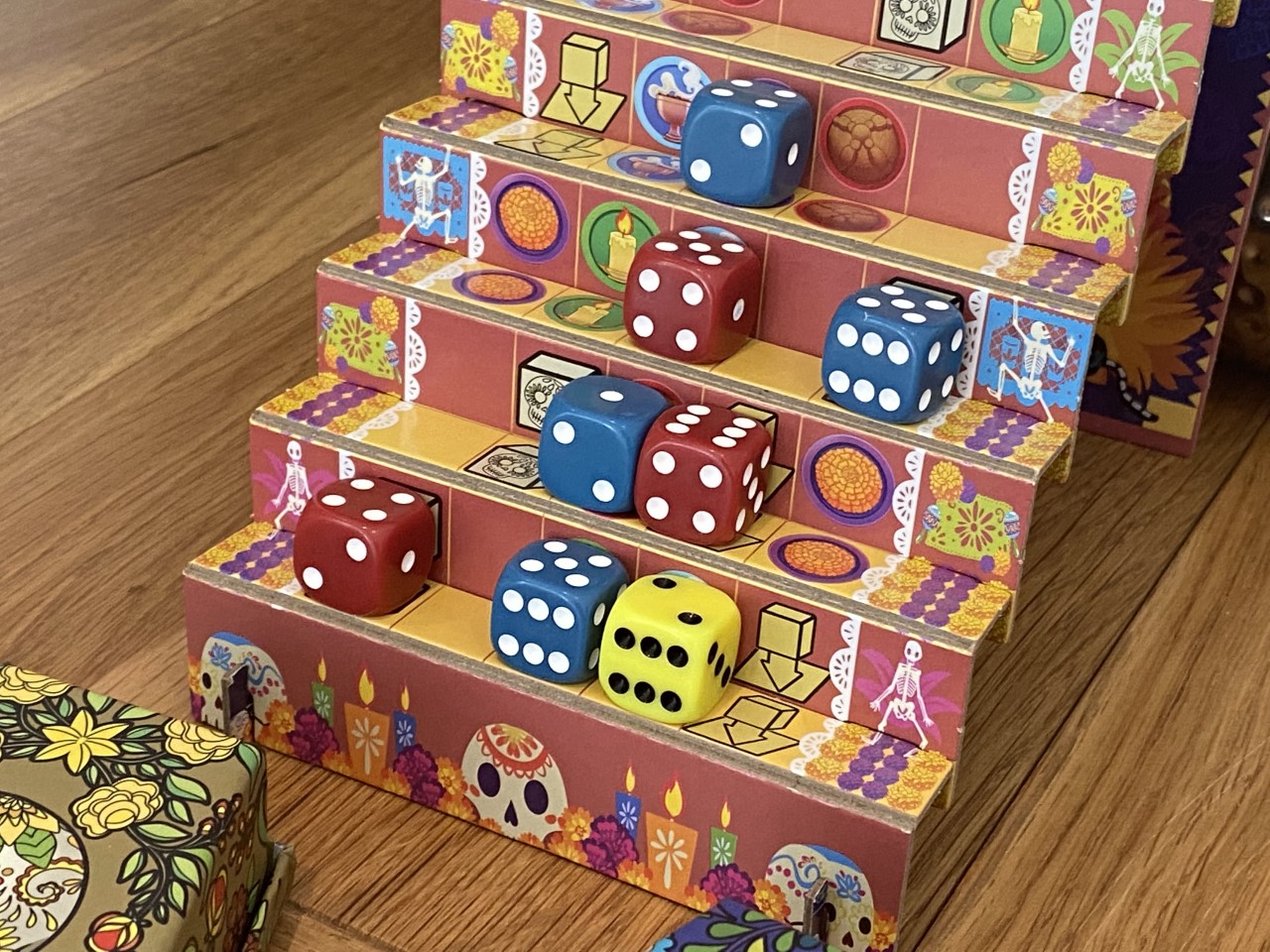 Still looking at the first coffin action, once you’ve placed your die (or dice), then if there are souls from more than one player in the coffin, you must shake it, and if a one is rolled, all four coffins will rotate once to the right. Bearing in mind that this means the last coffin (which has an action linked to ascending the stairs) loops back to the start, the “dual purpose” of this action is to both get your dice into play (ideally straight to the casket in the second slot following rolling a one) whilst also dislodging your opponents plans, assuming that you’ve remembered that they have more dice than you in the last coffin.

Skipping the second and third coffin actions for a moment, when it does come to that fourth coffin, the action there asks the player to shake the coffin, look at the dice and then compare them. The winner (which is the player who has the highest total value across all dice) will then ascend two souls — which means taking two dice from the coffin and putting them onto ascending steps on the included three-dimensional staircase.

The second part of this fourth action allows the player to then ascend one additional soul (bear in mind, just because they shook the casket, they may not have won the comparison on the main action) or to rotate caskets, or to take a power die. Power dice add to the players overall number of dice (good) and in addition they also have two wild faces, so they score higher when compared. 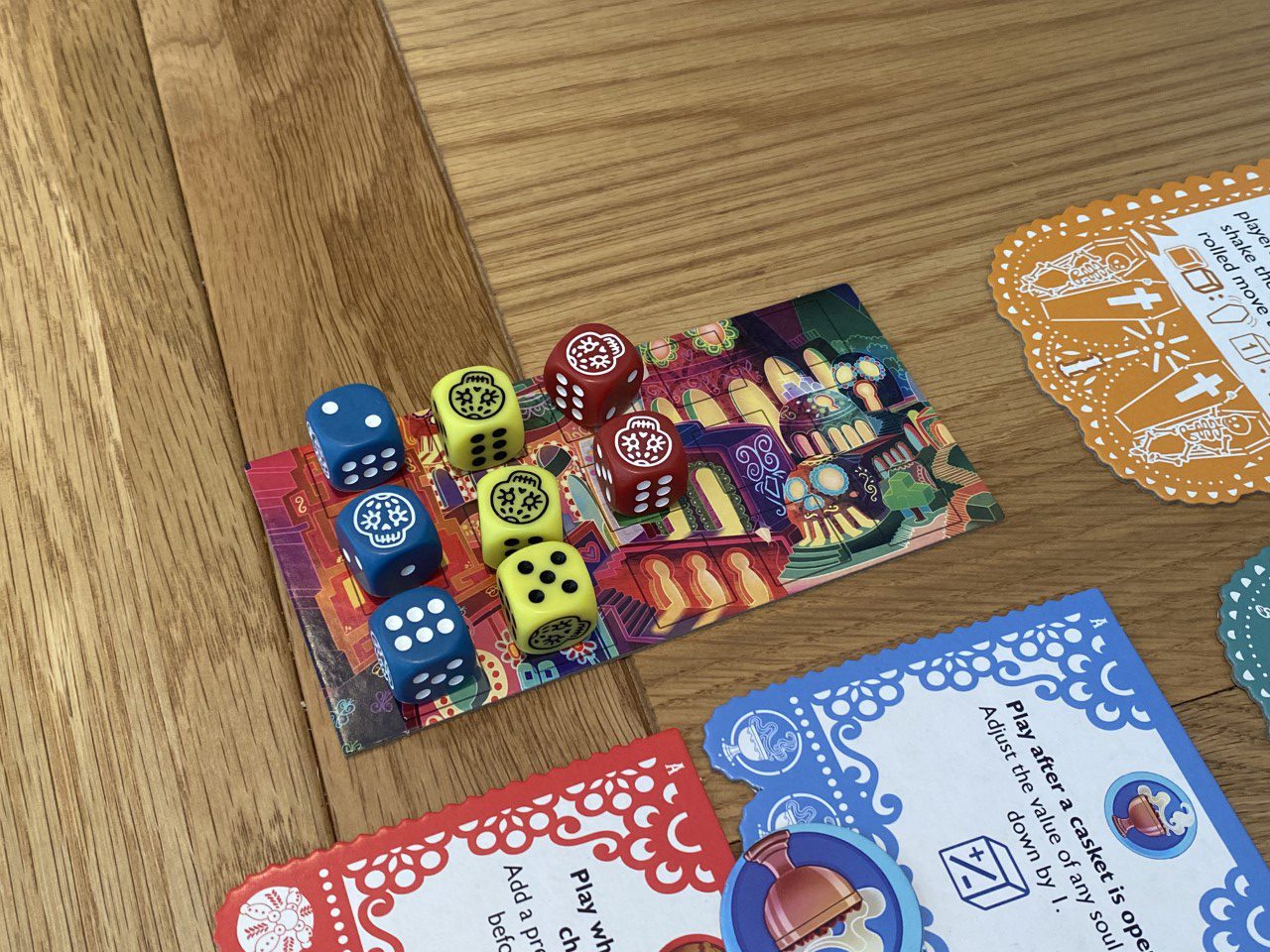 There are a few other things to consider in Die of the Dead which mitigate some of the randomness. For example, as the result of ascending onto the Marigold Stairs, a player can cover (and take) a bonus with each dice. One of the bonuses is to take one of four different tokens (which is also the secondary part of the third coffin action) and these tokens do different things. One allows a player to change their die face, whilst another allows a player to add a prepared soul to a casket outside their normal turn order.

The four token actions also come with both A and B sides, allowing a more complex experience to be had when using the B side. This compliments the player boards that are simply used to store up to three prepared souls in the base game, but which offer unique bonuses when used on their second side. Personally, I always prefer to play with the “unique” player mats, but I enjoy using the tokens in either A or B form equally. 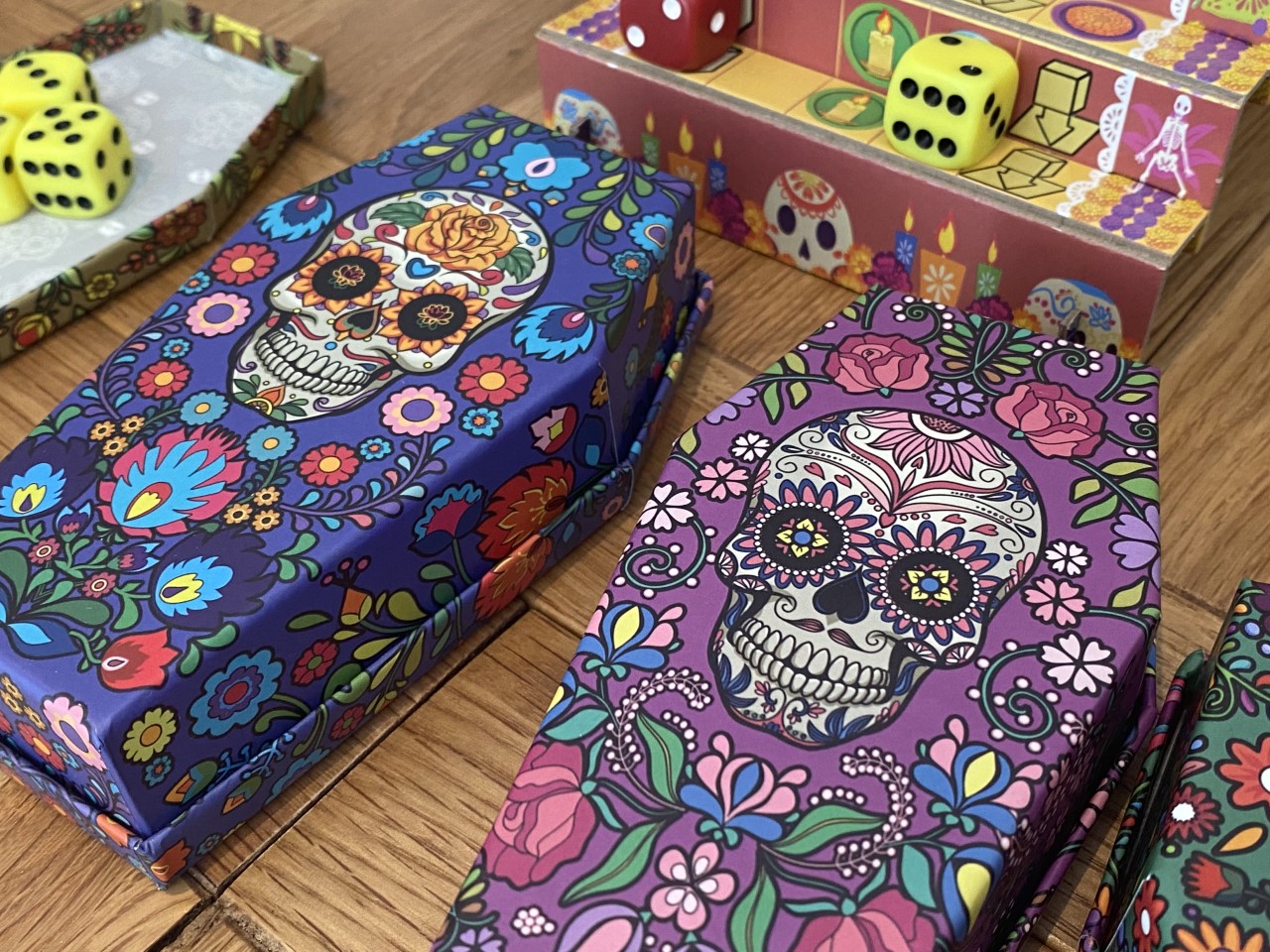 Getting good at Die of the Dead takes a bit of time, since it tasks the players with both memorisation and luck mitigation at the same time. Your first strategy should almost always be to make sure that you have a “competitive” amount of dice in each casket. After that, it’s about remembering which caskets are better for you, and which are better for your opponents, and then using the casket abilities and tokens to try and manipulate that.

At some point in the game — several points actually — your opponents are definitely going to get their souls into the casket in fourth place ready to ascend, so having a token that lets you rotate the caskets can be used at a critical time. On this note, one challenge with Die of the Dead at higher player counts is that the players have much less control over the board state in between their turns. At two players, you can kind of predict what your next turn will look like — whilst at three and certainly four or five, that’s increasingly less true. 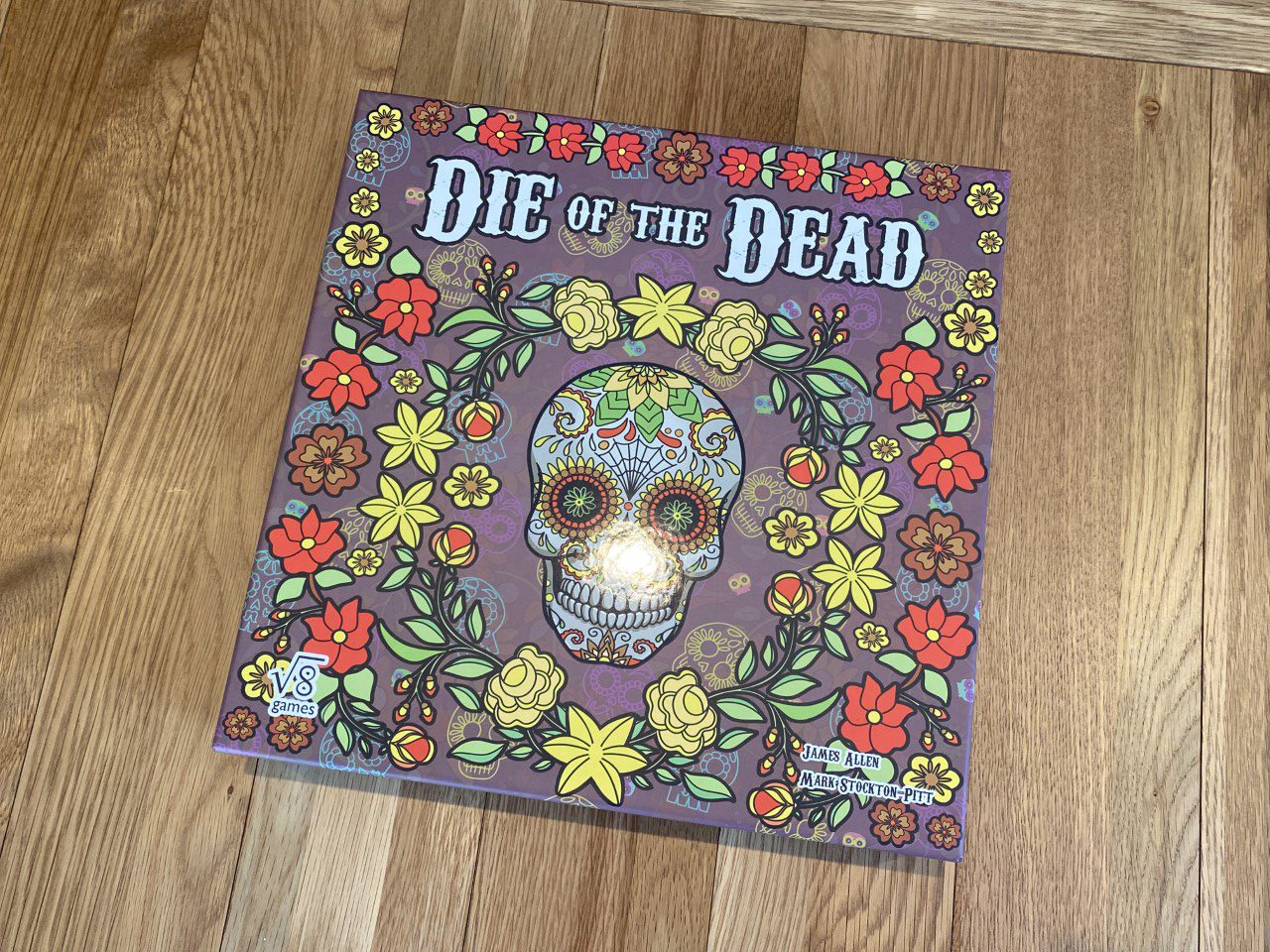 Going into Die of the Dead then, you have to accept that you’re playing a game that is built on a foundation of randomness —  by design — but that the game itself features several interesting and unusual mechanisms that play around with that randomness. Also, of particular note, is the superb build quality and production, which actually enhances the gameplay due to the tactile nature of shaking and moving the caskets, and when players climb the gorgeous, chunky dice up the 3D staircase.

Die of the Dead may not be for everyone, but if you can suspend your “eurogame control freak” personality for a moment and you’re looking for a slightly heavier dice rolling and luck driven game, it may have a place on your shelf. With two kids in my house (one four and one six), Die of the Dead definitely has something to offer us, and as such, it’s staying on my “keep” shelf for the time being.

You can find Die of the Dead on Amazon.