Frostpunk Challenges you to Lead a Society Through an Ice Age like No Other.

Frostpunk from 11 Bit Studios. the creators of The War of Mine, is a game which challenges you to lead a society through the darkest, and coldest, of days.

By the time the people realised that the storms weren’t going to lift it was almost too late for Humanity. The last ditch plan was executed, frankly, too late, and the confirmed numbers of living people dropped from over a billion to less than one-hundred. Frostpunk is a game about steering the elements of a society day by day, about guiding a moral compass, and also about just getting by. 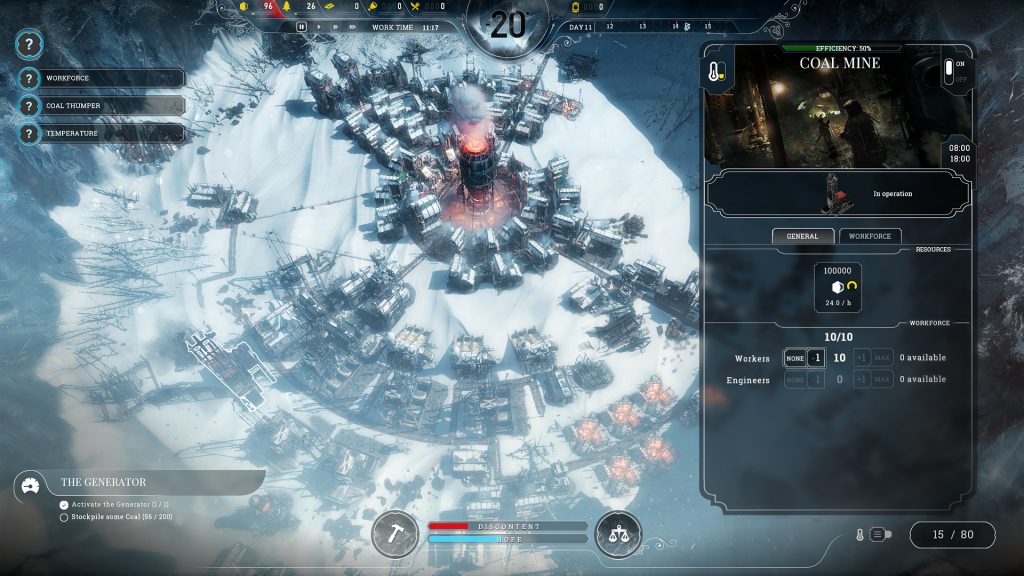 Frostpunk is also as unforgiving as the game’s villain:, a bitter Winter which constantly deepens and worsens, threatening to envelop the haggard band of survivors under your leadership.

Leadership in games is often painted as something to be celebrated, an ability which gives a breadth of power over which you control many under you. Frostpunk isn’t dissimilar in this, however where other building or management games will have you watch a population number (Banished, Simcity) or paw over supply lines (Settlers, Valhalla Hills) it is instead more interested in the feeling of the society. It represents this through two large bars at the bottom of the screen, discontent and hope. The game is also special in how it challenges the stubborn player to peel away aspects of modern Humanity and society in order to survive.

It starts simply, a cluster of adults gathered around a gigantic, heaving monstrosity of the Industrial Age. A three-storey high furnace sat inert and lifeless, a strange obelisk-like pillar in the middle of a large, crater-like clearing. Players then quickly set to work assigning their experts or commoners to work the various resource deposits which litter the snow. Once you have enough coal you can spark up the furnace, generating a pocket of warm air around the generator. From there you have to build accommodation, work-spaces, medical quarters, facilities and more. 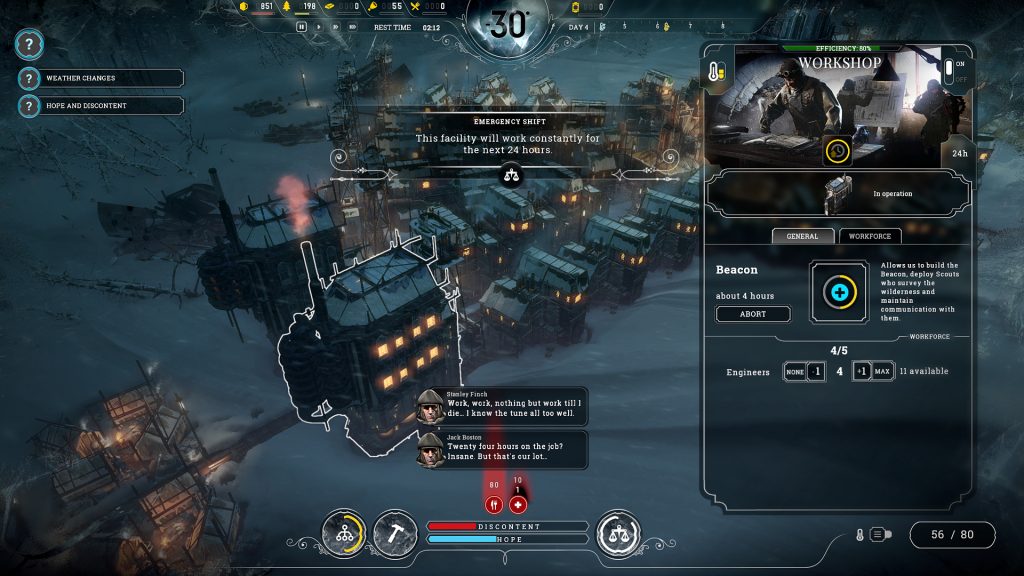 With most games of this ilk, this would be enough. You’d keep filling up the furnace with the coal while starting to harvest the battered pallets and securing the metal sheets for construction. All while sending out hunters to gather food to feed people. That, actually, is the core of the game. But, deadly chills spike more often than they lull, and over-exposure to the cold leads to sickness, and there’s never enough room. Soon — before even the technology tree is opened — the game’s Laws screen pushes itself to the forefront of the experience.

Błażej Żywiczyński, 11 Bit Studio‘s Senior Producer on Frostpunk, expanded on the law system’s overarching role in the game, “It’s not about surviving, it’s about how you survive and the society you create.”

The laws system is one implemented to not only offer other options to the player, but also to challenge people’s pragmatism and morality in the face of extinction. An early decision asks if you’d allow child labour — sending children into the mines to perform ‘safe jobs’.

It’s not a branch that I followed, but even my path then allowed me to set those children to work in the safer, more technical environments of the Medicine Houses and Workshops. The child labour law, should you enact it, takes you down an understandably darker route, messages of children wounded and injured at work appear, and when society begrudgingly accepts it you’re then offered the chance to further enable even more dangerous tiers of child labour.

The game, after all, plays out in hours and days, not weeks and years. The children you are protecting will never grow old. For most players they won’t even survive the two or three months they champion the bastion for. Months is all you have. You have even less if you can’t replace the dwindling supplies in the crater with those from beyond — a mid-game challenge made obvious from the first few minutes of play. 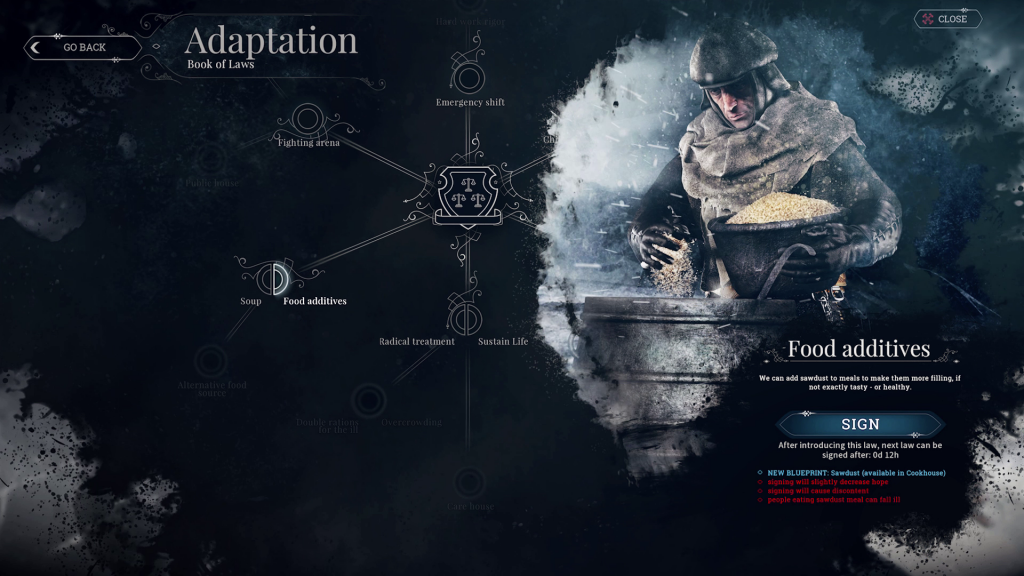 I, being a bleeding-heart of sorts, couldn’t stomach the idea of shoving the kids down the mines, and I also wasn’t too keen on emergency shifts or, as Żywiczyński explained it, hacking off the limbs of the wounded as to try and keep them working for a little bit longer.

Back to the Hope and Despair gauges at the bottom of the screen then.

Laws, as well as living conditions, and how you hold up on your promises (made as a reaction to events which pop up momentarily) each affect the two bars — these bars, and the little thought-bubbles which pop up from the citizens now and then, are the main indicators of how strong your grasp is on the survivors.

Living conditions, aside from proximity to the warmth of the generator, are affected in the same way as most things in the game, by the curious, multi-tiered technology tree. I didn’t get a proper look at the more advanced end of the tree during my playtime, however I did see technologies which increased the effectiveness of the various gatherers, allowed the beacon (more on that later) to see more on the map, and even options to have each house have it’s own, smaller heat source. Big changes in desperate times. 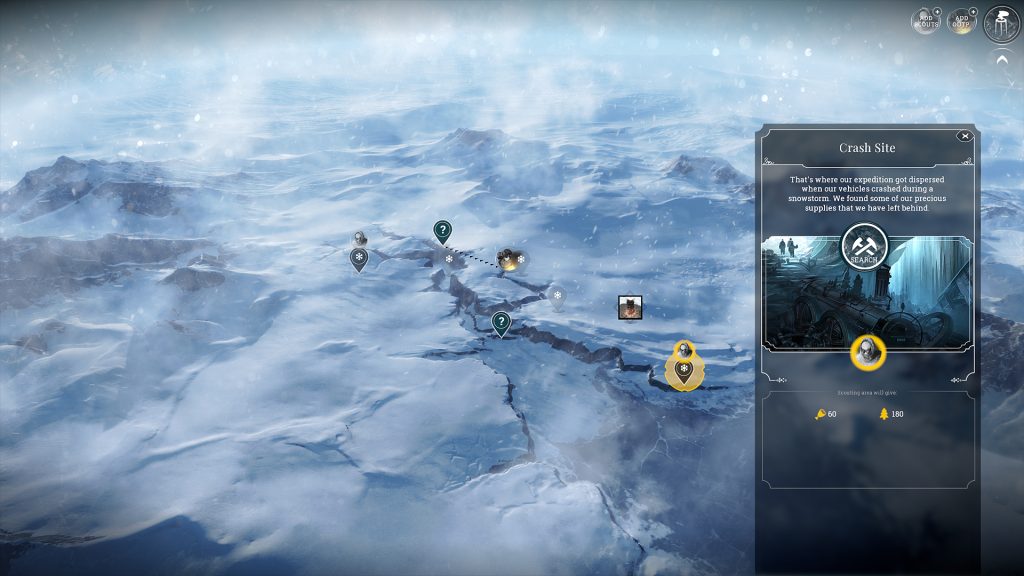 I alluded earlier that supplies will later come from outside the crater, and I just mentioned the beacon. One of the earlier objectives you’ll complete for Frostpunk’s main story-thread revolves around you researching and building a beacon, as well as equipping scouts to head out and investigate events out beyond the crater. It’s here where you find new citizens (remember, this takes place over days), gain new opportunities, and advance the story.

Two points remain to discuss, and I’ll do that quickly now:

Firstly, the city must be laid out with its buildings along roads, in the build that I played the button for laying roads was not immediately obvious, which cost me some progress, especially as I’d managed to start building a second layer by placing the buildings next to existing ones and so took too long to realise it was an issue.

Secondly, the game is beautiful. Yes, yes, I know it’s all very macabre and miserable —or hopeful and inspiring, depending on your angle— but the game is visually stunning. As citizens head out into the ice at the start of their shifts they break through the newest snow, carving a path which remains until its eventually reclaimed by the storm. The citizens have mostly given up on life being easy, and so a single shift might well carve a dozen paths into the landscape as they glide to work, rather than how most people would probably walk, in line. It’s always poignant.

Frostpunk is planned to release on PC at some point later this year.