The game has a simple and rewarding turn-based structure that leans heavily on board game mechanics, whilst simultaneously managing a myriad of increasingly complex game state features as the board develops. The kind of things that feature in Antihero are almost impossible to manage in a traditional board game because keeping tabs on so many small developments descends into a nightmare. But, with the benefit of a digital dungeon master, anything is possible. 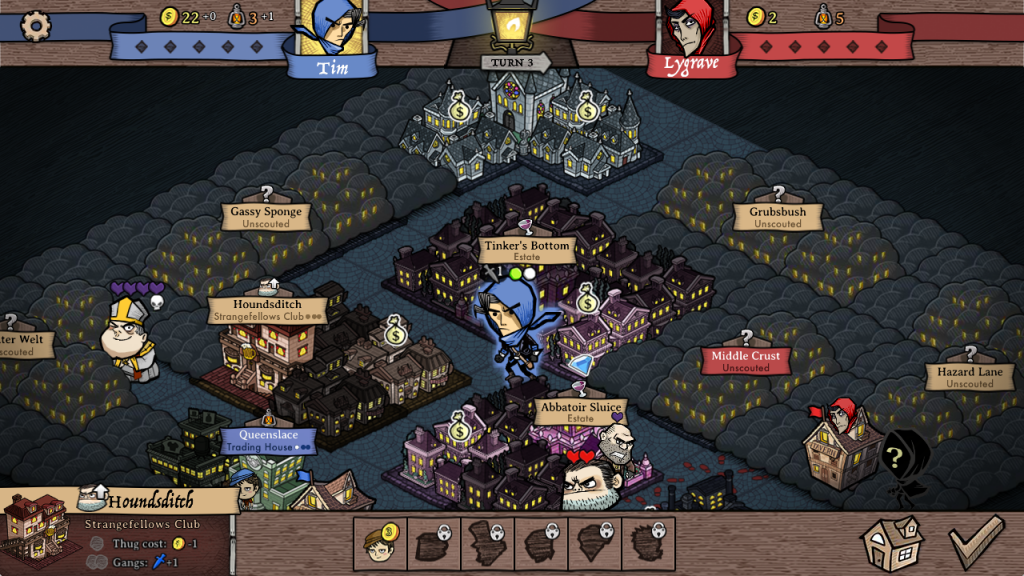 Antihero is currently an exclusively one vs one experience with a clear focus on multiplayer, but even so, lead developer Tim Conkling has clearly invested considerable time and effort in creating a comprehensive tutorial and a fully featured skirmish mode that allows players to tackle the uncompromising AI. Most of my early games led to defeat, or to a restart because I could tell defeat was imminent. In Antihero (as with most good board games) you can lay the foundations of victory very early, but there are enough varied ways to achieve it that you can never truly count an opponent out.

Winning in a standard game of Antihero comes from claiming five victory points, but obtaining those points can be achieved in various ways. Some players might choose to hunt down assassination contracts (worth a victory point each), whilst others will seek to control the board and bribe the local priesthood (worth a victory point for each church fully claimed.) Victory points can also be bought using one of the in game currencies, lanterns, which players gain each turn depending on the buildings they control and the upgrades they have applied.

Each game is played on a procedurally generated interpretation of one of four themed areas named Palace, Docks, Masquerade and more generically, “Big City.” Within each map are a number of streets, houses and buildings of particular interest, as well as a few non-player characters. Players begin with their own Master Thief as their only piece, and must burgle houses, scout streets and buildings and expand their empire with new pieces like Urchins, Thugs and Gangs. Urchins can occupy most buildings to effectively claim some benefit from them (lanterns from trade houses, gold from churches and so on), whilst Thugs, Gangs and several other pieces exist to help control the board and advance the players position. 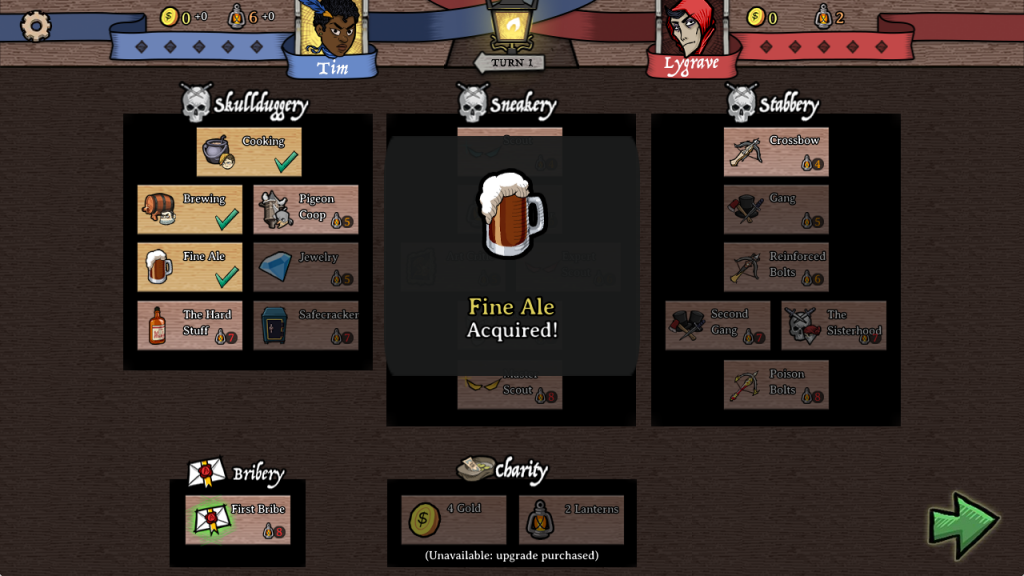 Every piece is restricted to certain actions, and the player has access to a comprehensive research tree that features three branches. Within each branch, the player may spend accumulated lanterns on upgrading their minions (Urchins, Thugs, Gangs et al), increasing the overall standing of their Guild, or by enhancing their Master Thief. Early choices are cheap and simple – get a free Urchin, gain another Master Thief action and similar – but as the cheap upgrades diminish, the choices get harder and the effects more powerful. At some point, you will need to choose whether to invest in a Truant Officer (who can instantly evict all three Urchins from a building) or The Sisters (an incredibly powerful, single use assassin that can kill even the most powerful enemy gang.)

I mentioned earlier that gaining victory in Antihero isn’t as simple and assured as you might think due to the many ways in which it can be achieved. That’s a feature that comes directly from the very best board games, because when playing with paper and plastic, if a player knows they can’t win, the fun ebbs away very quickly indeed. In Antihero, the balance is achieved because by the mid-game, it’s nigh-on impossible to be leading in every area. If a player invests heavily in building control, a Truant Officer can quickly undo all their work. If a player has a Gang that is dominating the board, The Sisters can put an end to it in an instant.

As a result of these mechanics, Antihero is a game of light tactics and exploration, of calculated risks and investments and with very little dependence on luck. No starting location is truly disastrous, and almost every situation in the game can be made into an opportunity. There are no rolls of the dice anywhere to be seen, and even in its pre-release state, I can already tell that Antihero is going to attract some seriously competitive players as it becomes more popular. 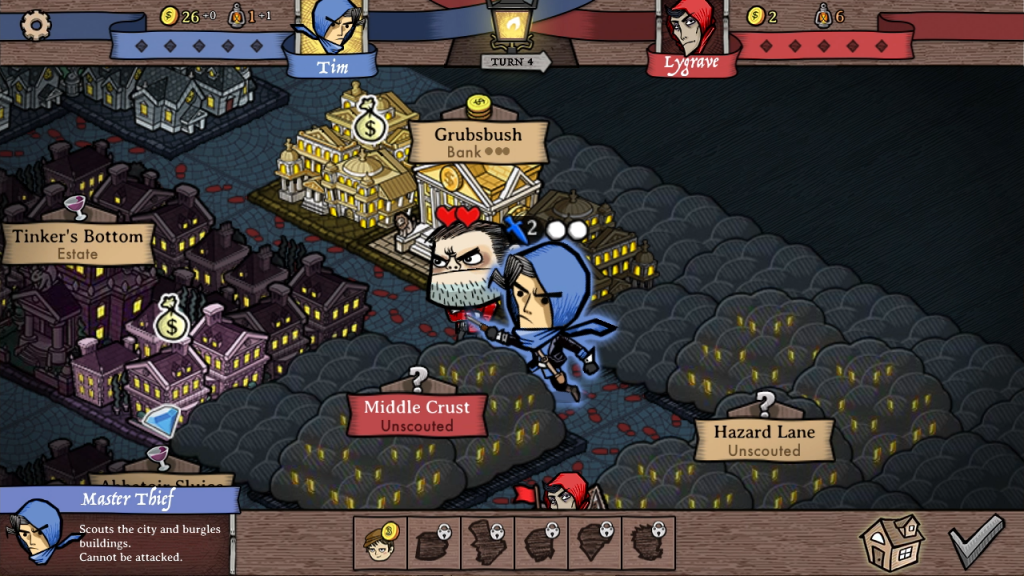 I realise that people often want to read about how a game looks and sounds, but in all honesty I don’t care about that in a game like Antihero, and I wouldn’t mention it at all if both weren’t just as good as everything else in the game. The art style is clear, distinctive and eye-catching, whilst the music is befitting of the naughty, Dickensian world that the game takes place in. There are some very minor complaints linked to graphics, such as the selection of buildings behind other buildings, but I am nitpicking at that in the extreme.

Right now, Antihero is a good looking game that plays exceptionally (and surprisingly) well. I mean, this is such a good digital board game that I’m surprised it wasn’t made by an industry veteran. With that said, it is the wealth of fresh and innovative ideas that it features which makes it so good, and even though it isn’t formally released for over a month, it seems incredibly polished. I have high hopes for Antihero, and even now, it stands head and shoulders above many games that promise a lot more but falter at launch due to bad execution and failed promises.

The Hand of Merlin says Multiverse-Schmultiverse

Yaga — Take on an adventure