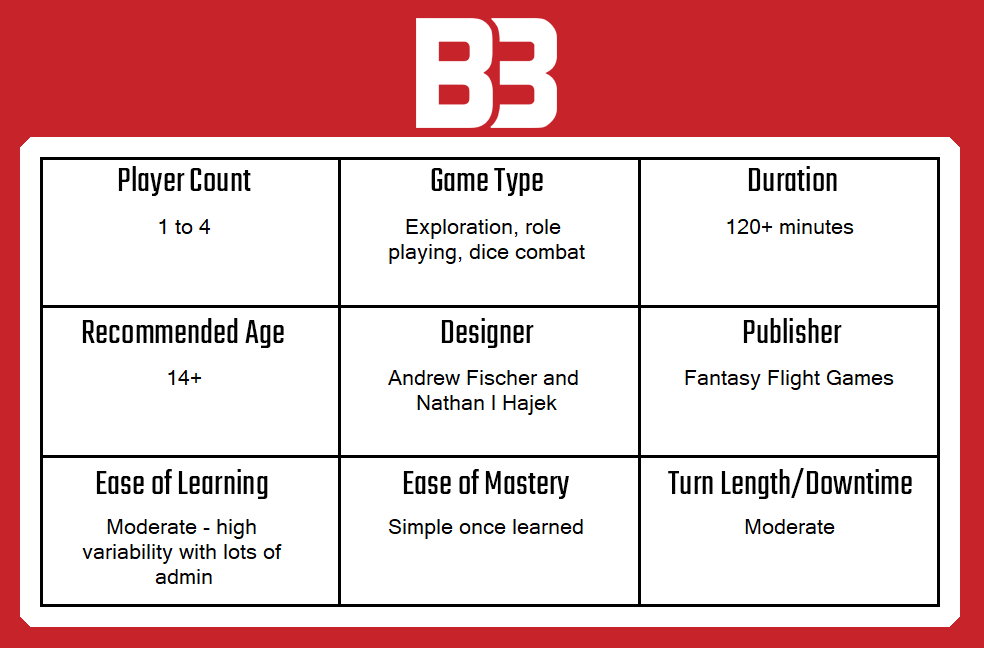 Fallout is a post-nuclear adventure board game for one to four players. Based on the hit video game series by Bethesda Softworks, each Fallout scenario is inspired by a familiar story from the franchise. Survivors begin the game on the edge of an unexplored landscape, uncertain of what awaits them in this unfamiliar world. With just one objective to guide them from the very beginning, each player must explore the hidden map, fight ferocious enemies, and build the skills of their survivor as they attempt to complete challenging quests and balance feuding factions within the game. 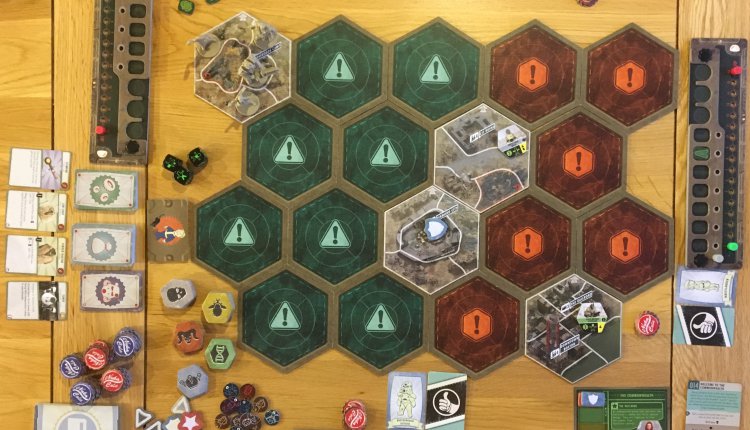 Whilst there have been several board games set in the Fallout universe, the version produced by Fantasy Flight Games that I am reviewing today has by far the highest profile. Developed by one of the worlds most prolific board game publishers and featuring four scenarios taken directly from Bethesda’s latest video games, Fallout is certainly set up for success.

The developers wisely chose to focus on the story and character development that runs so close to the heart of the Fallout video games in the board game adaptation. This results in a game that encourages and rewards players for exploring the wilderness, tackling quests and building their chosen character up in whatever way they choose.

The game itself uses a modular board that has fewer (single sided) pieces than it might, but there is enough variation between them and the cards that drive the action to create sufficient variety. Board pieces are revealed only when explored, with random encounters drawn on certain spaces and enemies on others. Encounters are drawn from a face down deck and usually result in a multiple choice decision that may require the active player to test one of their SPECIAL traits (strength, perception, endurance, charisma, intelligence, agility and luck.)

Traits enable players to access valuable rerolls when taking tests, which always depend on the outcome of a roll. The SPECIAL traits are added as the result of filling up an XP track, which is usually achieved by winning fights, participating in encounters or completing quests. As the players gain levels, new SPECIAL tokens will be added at random, with powerful perk cards being offered instead when duplicates are drawn.

Ultimately the winner is the player who gains a fixed amount of influence, which is essentially the measure of how successful their endeavors in the wasteland have been. There are always two factions such as The Railroad and The Institute vying for control of the map in any given scenario and a track is used to demonstrate their current strength, which can be influenced by player decisions. There’s actually quite a lot going on in Fallout now I think about it, so let’s dive into it in more detail. 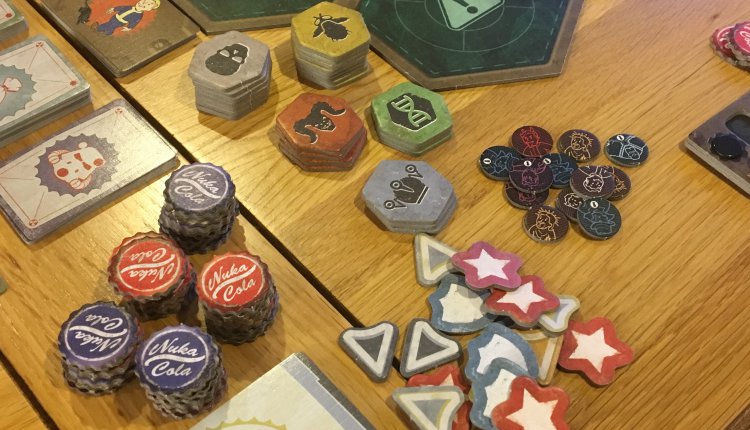 As with most FFG products that carry this kind of license, Fallout has a ton of stuff in the box. Most of it is produced to a very high standard, although as this is perhaps my fifth game from a similar mould, I should also say that I’m beginning to find the management of five or six different decks of cards a little inelegant.

The board pieces are of a decent thickness with a nice, appropriately designed theme. All are clearly laid out to indicate normal spaces as well as radioactive and challenging terrain, whilst enemy spawn points and other locations are identifiable without need to refer back to any manual. Although the board is made up of modular, hexagonal pieces that must be flipped, it rarely ends up moving around during play.

There are five miniatures included that represent only the player characters – a super mutant, a ghoul, a wastelander, a vault swelled and a brotherhood outcast. Tokens are used to represent the enemies, which are split into a number of groups – critters, humans, mutants etc.  The tokens are helpful because they contain useful info such as level, damage and hitpoints, but FFG games at the same price point have often contained twenty or more miniatures.

The player cards however, are impressive. Two pieces of cardboard are pinned together to enable SPECIAL tokens and perks to be slotted into them, whilst further pins are used to track radiation, HP and XP levels. All of the many, many decks and supporting pieces are of the usual high standard, which means that it’s only really the administration of them that is a bit of a pain in the backside. 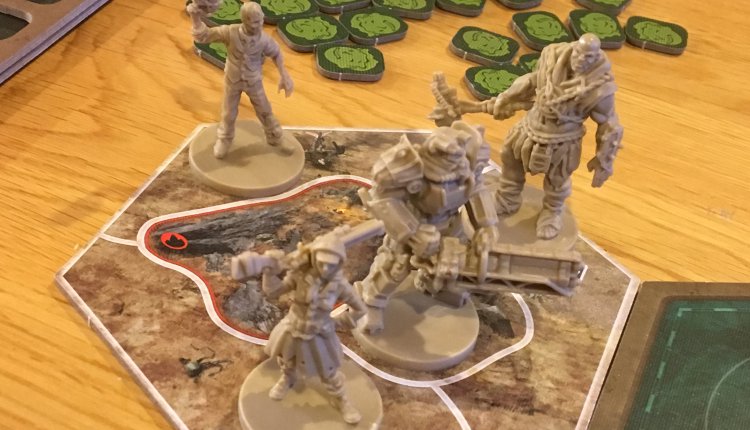 Turns in Fallout are quite brief, or even when they are not, it’s only because they are interesting for everyone. Each player takes two actions, including moving, exploring, attacking or tackling an encounter, as well as a few others that are a bit more mundane – camping or visiting the shop for example.

Most of these take maybe thirty seconds or less to complete, with the exceptions being some combats, all encounters and the resolution of quests. Exploring is a simple matter of flipping an adjacent hex, whilst movement allows all characters except the Brotherhood outcast to move two spaces (and even he can do so if he pays a bottle cap, which is the in game currency.) camping restores health, attacking does what it says on the tin.

The real meat of the game is in the encounter and quest elements, which really bring the game to life. Encounters can result in unexpected outcomes such as gaining a companion (including many popular characters from the series) or a powerful item, whilst quests often have interesting and thematic decisions within them that affect the faction power level within that scenario. 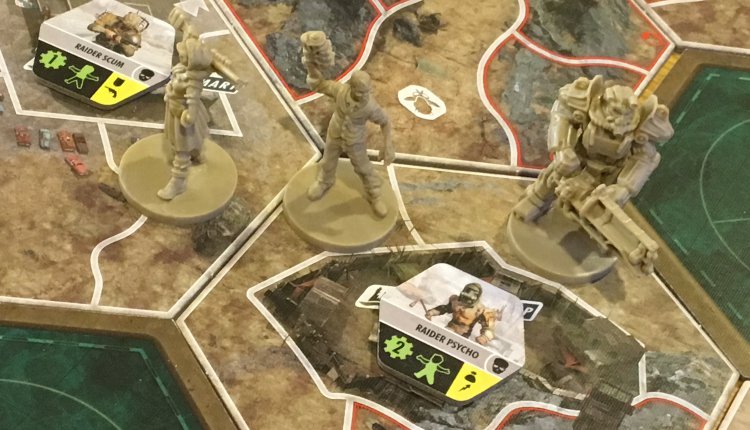 Whilst the setup time is quite long and the game requires a fairly high level of administration, once it gets going, things improve rather rapidly. Games that tell such organic, well woven stories effortlessly enough to integrate combat, player development and a modular board are rare.

Fallout doesn’t do all of this perfectly (for example the combat feels rather light and somewhat random) but it knits everything together at an above average level to create something that is more than the sum of its parts. There are four different scenarios and you’ll almost certainly never get through all of the different encounter and quest cards, not to mention everything else.

Game turns are fast whenever nothing interesting is happening and just right when something more exciting does occur. There’s no real player interaction as such, but encounters will generate a sense of interest from others at the table (especially since one of them will need to read the card and deliver the available options.) As one or more players get closer to the influence point goal, Fallout does get more and more like a race – which does feel like quite good fun. 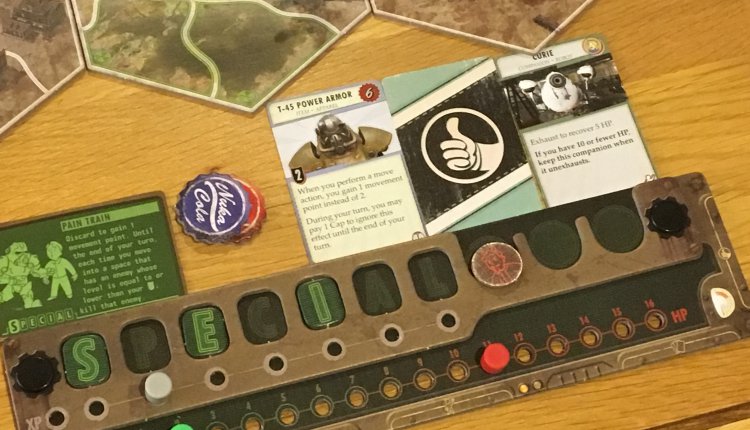 It’s a good thing we don’t rate games with a score at BigBossBattle, because if I had to, I think I would struggle with Fallout, so I’d much rather you read the words. It’s a good game, but the setup time and in game admin leave me a little jaded – as does its similarity to several other FFG games. It’s also quite random – cards, dice, drawing SPECIAL tokens.

On the plus side, the positives do outweigh the negatives. The storytelling and character development aspects are great, whilst the exploration element feels very appropriate to the subject matter. The items, companions, powers and other features bolster the combat nicely despite that random element I mentioned and it’s great that the four scenarios also represent factions and power struggles from the video game series.

I don’t think fans of the games should hesitate to add Fallout to their collection, whilst even for those new to the franchise, there is much here to like.

A copy of Fallout was provided for review purposes, and can be purchased from all good local games stores. For online purchases, please visit 365 Games