Dr Toby: Rods from the Gods

In space, no one can hear you scream. That is because, in space, there is no atmosphere. In atmosphere, all this Nitrogen, Oxygen, Carbon Dioxide and Argon slows down everything. Bullets slow down over time, missiles need engines to keep them from falling out of the sky. But space, space is another thing. Many video games use this idea in its weapons.

Call of Duty: Ghosts with its Odin missiles, The huge kinetic cannons in Mass Effect, the mass drivers of Halo. Such devices are called Kinetic Kill Vehicles, wherein they ‘kill’ the other object by delivering a huge amount of kinetic energy to them. Basically just hitting another object hard.

Today, lets see if we can make our own and see how it works.

Now, in atmosphere we need an engine to get a missile anywhere because of this pesky thing called air resistance and gravity. But something falling from space doesn’t need any rockets, you just need to chuck it at the target and let gravity do the rest. Commonly called ‘kinetic kill vehicles’ they provide damage by just hitting the other thing hard, no explosives or anything, just a massive lump of metal hitting hard.

So, what do we want from our KKV? We want a long thin tube to best get through the atmosphere, dense to deliver the most energy possible, and made out of some form of hard metal to withstand the intense heat encountered when entering the atmosphere. The original design documentation of Project Thor, a weapon systems theorized in the 1950’s, suggest a tungsten telephone pole, so lets start from there.

A big telephone pole has a radius of about 8 meters, and is 80 meters tall.  The volume of a cylinder is  π*r^2*h. Therefore V=π*8^2*80, V=15710m^3. Now the original design documents call for this tube to be constructed of titanium, but titanium is a light weight, literally at only 4.5g/cm^3. We want something much heavier. Going up the ranks of dense metals we find lead, at 11.3g/cm^3; gold at 19.3g/cm^3; plutonium at 19.8g/cm^3 and finally osmium at 22.6g/cm^3. Converting grams per centimeter cubed to kilograms per meter cubed we find Osmium to have a density of 22,600 kilos per meter cubed. Therefore, an osmium pole of 14m^3 would weight 355,046,000 Kilograms, or a thousand times the weight of the water leaking out of the Fukushima reactor daily several years after the Tsunami in 2011.

Now that we have tossed our Osmium telephone pole down towards the planet (for fun aim it at Glasgow), we need to work out how it falls through our atmosphere. Now modelling our telephone pole falling through earths atmosphere, modelling how it heats up as it descends would require a weeks work and renting time on a supercomputer, and we dinnae have the money for that, so lets just make some assumptions. Lets say, for the sake of time and my wallet, that the atmosphere slows down our rod from the gods by 1 percent, which is rather alot for such a small and streamlined object.

Lets put our launch vehicle in a Medium Earth Orbit, at 30,000 kilometers out. Now we know that the mass of an object has no affect on the speed of a falling object (as theorized by Galileo and proven by experiments on Apollo-15). all we need to know are the characteristics of the attracting body, or Earth.

But before we can work with this speed, we must take off the 1 percent from the atmosphere.

Now we can work out how much energy this thing has when it hits the ground. We can use the good old Ke=0.5*m*v^2.

Now lets convert this to tonnes of TNT to see what its gonna do to poor old glasgow. 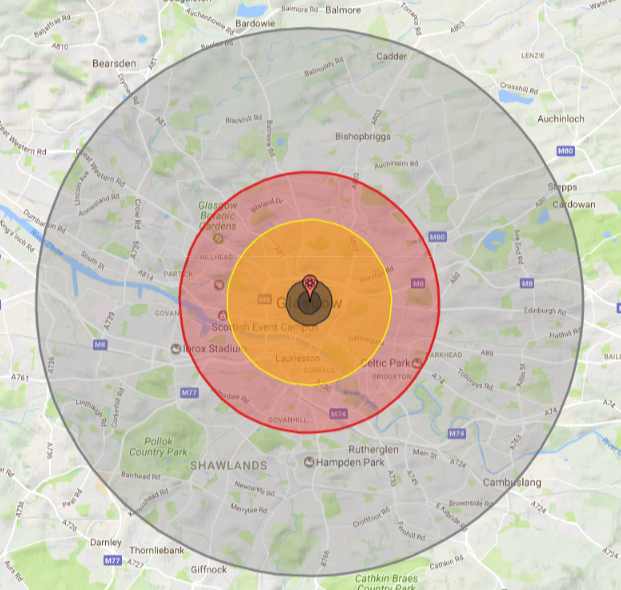 That central black circle is the interior circumference of the crater of ground zero (310 meters), and the next grey circle is the circumference of the outer lip of the crater (620 meters), covering 1.12 square kilometers, where everything is either destroyed or covered in rubble. Beyond that is the orange fireball, extending out 2 kilometers from the source, vaporizing anyone within its 15.4 square kilometers area. Next is the red circle, which marks the limit of a 20PSI shock wave, 3.49 kilometers out from the impact point. We have 38 square kilometers of complete devastation here, with nary a standing structure in sight.

Fatalities are almost complete in this zone, with the few remaining survivors suffering heavy injuries from the shock wave, along with injuries from the falling and destroyed buildings. Finally we have the outermost grey ring(7.33 kilometers), demarking the 169 square kilometers of intense destruction. Most buildings are destroyed in this zone, and fatalities are high.

So there we have it, a city destroyed, with nearly half a million dead. The further up we move this pole, the more damage we do, until we end  up destroying the world, similar to the Chicxulub asteroid which killed off the dinosaurs.In the end, any fight can be simplified down to whoever is higher in the gravity well. People on top of a large wall can safely toss rocks down upon others, planes can drop bombs, a spacecraft in orbit can destroy the planet and mere earthlings could do nothing. Something as simple as a alien garbage truck could easily wipe out all life on earth, by simply going out to the asteroid belt and lobbing a few dozen extinction level asteroids at us.

So now we’ve murdered everyone in Glasgow, but if you’re anything like me you’ll want to know how much it would cost to destroy all of Glasgow.

But that’s just the first part of this article, the cannons in Mass effect and Halo’s mass drivers lob big chunks of metal at other space ships, so lets have a look at that. With a big metal pole, the most effective method of moving them is a big rail gun. Rail guns function by powering successive electromagnets to speed up a object up to extraordinary speeds. Used on american battleships, they are used everywhere in science fiction, the mass drivers of Halo and the cannons of Mass effect are common examples.

Now rail guns can reach some seriously crazy speeds, with theorized plans reaching 1 percent the speed of light. Because we want to make as big an impact as possible, lets use that theoretical speed for our telephone pole. Now the speed of light is 300,000,000 ms^-1, so 1 percent is 3,000,000ms^-1.

Gunnery Chief: This, recruits, is a 20-kilo ferrous slug. Feel the weight. Every five seconds, the main gun of an Everest-class dreadnought accelerates one to 1.3 percent of light speed. It impacts with the force of a 38-kilotomb bomb. That is three times the yield of the city buster dropped on Hiroshima back on Earth. That means Sir Isaac Newton is the deadliest son-of-a-bitch in space. Now! Serviceman Burnside! What is Newton’s First Law?

First Recruit: Sir! Unless acted on by an outside force, sir!

Gunnery Chief: Damn straight! I dare to assume you ignorant jackasses know that space is empty. Once you fire this husk of metal, it keeps going till it hits something. That can be a ship, or the planet behind that ship. It might go off into deep space and hit somebody else in ten thousand years. If you pull the trigger on this, you’re ruining someone’s day, somewhere and sometime. That is why you check your damn targets! That is why you wait for the computer to give you a damn firing solution! That is why, Serviceman Chung, we do not “eyeball it!” This is a weapon of mass destruction. You are not a cowboy shooting from the hip!

If you have any more games you wished to see scienced, or a particular mechanic you wish to see analysed, please leave a comment below and we will get right on it.