Anyone who has ever played Overwatch has learnt to fear Mei and her freeze rays of doom. Particularly horrifying is her ultimate ability, where she throws a small drone out causing a blizzard which freezes any caught in its confines. But that is exactly where we’re going, into the heart of the blizzard, to figure out what exactly it does.

To examine what it does, first we must work out what exactly it does. Taking 1.5 seconds to activate, it cools a 10 meter radius sphere around down to subzero temperatures for 5 seconds. And here we get out first bit of information, the blizzard. Befitting a blizzard, snows swirls around, following the wind. Normally snow forms high up in the atmosphere, where the air pressure is low. Down here on the ground, with a full 1 atmosphere of pressure, it needs to be a lot colder for snow to spontaneously form, specifically, minus 35 degrees Celsius. But that’s no fun. As the outside world is not effected that means the whole area is not the same temperature, but the outside edges are -35 degrees whilst the centre is much colder. The coldest natural temperature recorded on earth was -89.2C in Antarctica.

But this is an advanced weather drone developed by a genius scientist in 2076. For fun (and to make this all a lot more interesting) lets say that the average temperature of a frozen hellscape is -150 Celsius. Next we must work out what the temperature before was, and that will require a bit of guesstimation. None of the maps have any indication as to the temperature, even Watch point: Gibraltar with all of the computer screens and displays in Winston’s place. Because we’re going for extremes in this article, lets find the hottest Overwatch map. Oasis is set in Iraq, which, during the summer can regularly reach 40 degrees in the sun. But after 60 years of global warming, combined with a especially hot sun throughout the day(yes I know this is ridiculous that’s the entire point of this article) we can say that the peak temperature during the day was 50C. That means during this ridiculous day the temperature dropped by 200 degrees over 1.5 seconds, then sustained for 5 seconds.

To work out the energy difference that ‘Snowball’ the drone can affect, we’ll use the formula Q=mΔcΔt

we know c, the temperature change and we know t, the time taken. Now we must find m, the mass of the object. In this case, the object is the air contained within the area of effect, a 10 meter radius sphere.

To work out the weight of the mass from the volume, we must multiply it by the density of air, in this case being 2.04kg/m^3

To contrast such a number, the hoover dam, at one point the largest dam in the world, produces 2,000MJ at its peak. One hundredandeigthieth the Hoover dam, all compressed into this little drone machine. But before we can work out what happens to this little ball of energy, we first need to know what it is made out of. It is impossible to know what it is made of inside, what metals it is made of, and calculating its volume would be a long and tricky task, so to save myself time and some significant hair-wrenching, I’m just going to assume ‘snowball’ is a plastic ball, with a radius of 5 centimetres.

Now normally in the game at the end of the blizzard the temperature will pop up back to normal, though anyone unfortunate enough to get caught in the blizzard will stay frozen for a second more. But in the real world nothing like that would ever work, so lets see what happens if we inject some real world physics into this. Now for fun lets assume all that energy gets released as heat, because, come on, nothing of that scale can hold that much energy and not turn into a lump of burnt and melted plastic.

To work out how hot that little balls gonna get, we just need to run through the formula backwards.

Lets assume the mass of this plastic ball is 200 grams, judging from how easily Mei throws it around.

Plugging that back into the original equation, we get;

OH, and we need to add the 50 degrees Celsius this little drone was at at the start.

There we go. Lets just go over this number, and try and provide some context for this number. The core of the earth is a dense ball of molten iron and nickel, with a smattering of gold and other dense metals. This core of compressed super hot liquid comes out to be estimated around, 6,000 degrees. So not really that hot in the whole scheme of things. How about the surface of the sun! That’s pretty hot isn’t it? The corona of the sun, or the ball of plasma around the sun which can be seen during a total lunar eclipse as wisps around the edge is approximately 5,000,000 Celsius, or a bit over half the temperature of our little ball. Diving down through the layers of the sun, we get to the core of the sun. Down here the immense pressures force atoms to fuse together at the molecular level,creating the heat and light that lets us all survive. Of course we can’t measure the temperatures down there, but models predict the temperature to be 15,700,000 degrees, or 180% the temperature of our little ball.

This little ball of plastic has been heated to temperatures approaching the core of the sun. This isn’t a drone anymore, its the ground zero of an immense shock wave of super heated air.

Now that we’ve given some context for the insane temperatures of this ball, lets see what happens to the people nearby. Poor old McCree got caught in Mei’s blizzard 3 meters away. First we need to work out how much energy this ball emits, then how much of this energy hits the cowboy. Lets assume that our little ball of gaseous plastic emits all the energy it collected back out again. This requires us to work out how much energy it emits or radiates. The formula for the amount of radiant energy is: p=εAσT^4

Now calories interact with your bodies in interesting way but I have neither the time, effort or equipment to accurately model McCree’s body, so we’re just going to focus on all the water in poor ol McCree. The official Overwatch wiki doesn’t have McCree’s weight, but it does give us his height. McCree appears to be a fairly healthy individual, so we can use a BMI calculator to find out that a man of 185 centimeters height (I’m taller than McCree!) should weight approximately 77 kilograms. The human body is approximately 60 percent water, so McCree has 46.2 Kilos of water sloshing around in him. 1 calorie raises 1 gram of water 1 degree (yay metric system!) so 1.95*10^16 Calories raises 46,200 grams of water by 422,652,302,400 degrees.

Adding on the original 50 degrees again gives us 422,652,302,450 Degrees, a very serious fever. Now McCree has gone has gone straight past melting, straight past boiling, does not pass go, does not collect 200 dollars and goes straight to a super heated cloud of disassociated atoms, all in a fraction of a second. 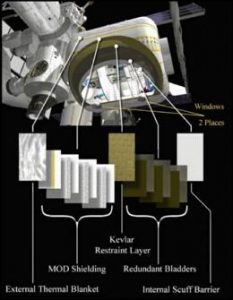 That gives us a total of 18,362,501 Joules being pumped into the ISS, which due to advances in structural engineering weighs 70,000kg. Putting that back into the good old C=Q/m*t gives us C=18,362,501/70,000*6.5. This gives us the new temperature of the ISS as 1,705 Celsius. Now the outer layers of the ISS5 have lots of technologies to protect it from the various dangers of space. An outer thermal blanket is the first layer, reflecting the suns heat back into space.

At this distance from the sun, the maximum temperature you can expect in outer space is around 250 Celsius. This sudden increase of 1,705 degrees quickly passes through this layer. Next up is a layer comprised of layered aluminium, meant to reflect heat back in forth inside, preventing it from reaching the interior. As before this aluminium turns straight into a gas from the combined forces of the incredible heat and the lack of an atmosphere. After that is the Kevlar that protects the station from micrometeorites, slivers of metal from old satellites, clumps of rocks from haunted meteors, even scraps of paint from space craft.

This Kevlar simultaneously melts and decomposes, rated at a maximum temperature of 500 degrees. Finally is the interior Titanium tube. As before, the titanium (melting point of 1,668C) melts into a cloud of gas.

As we watch the ISS5 turn into a cloud of gas and liquid metal with a few large pieces of metal from the side fortunate enough to not be in sight of the snowball WMD, let us next turn out eyes to the Moon, where hopefully this reign of destruction will end. Going back to the inverse square law, we put in the distance to the moon (384,400km) and come up with 5 Watts on the moon surface. A small water bottle, mysterious left behind from a previous space mission, absorbs the full 5 watts into its watery content.

Yet again going back to C=5/0.3*6.5 this little water bottle heats up to 107 C. As the water inside expands into super heated gas, the bottle bursts, letting the vapor float out to the surface of the moon. Meanwhile the moon may get slightly warmer, but apart from that nothing happens.

And there we have it. Anyone nearby gets vaporized. The ISS turns into a pile of gas and liquid, and anything on the surface of the moon gets melted. Aside from this an enormous crater would appear where little ‘snowball’ activated, the earth would suffer the mother of all earthquakes most likely have a very different orbit in the future. Now just remember that the next time you think about picking Mei.

If you have another scientific gaming mystery you want us to examine, drop a comment below with you idea!

Please remember that this is all in jest, we very quickly went beyond our understanding of how any of this works. While all attempts to make this as accurate as possible were taken, there are of course going to be mistakes and misunderstandings of how some complex bit of physics works. The primary purpose of this article was fun with a bit of science mixed in. Please read in a similar frame of mind.