Doodle Dungeon is great for kids and adults alike, despite its hidden depth!

With drafting, multifunction cards, a considerable element of advance planning and a fiendish risk-vs-reward scoring system, Doodle Dungeon is quite a complex beast. Even so, the inclusion of drawing (with stencils) and cute artwork make an otherwise surprisingly deep game exciting to players as young as six or seven.

Doodle Dungeon is pretty unique in my experience. It’s a game that takes place over three very different phases, and as I mentioned above it manages to present several complex mechanics in a simple way. Each player acts as a “Dungeon Master” and must draft cards to place walls, traps, treasure chests and monsters in their dungeon — whilst also upgrading the strength of each kind of minion or trap, or the value of the treasure in their dungeon. 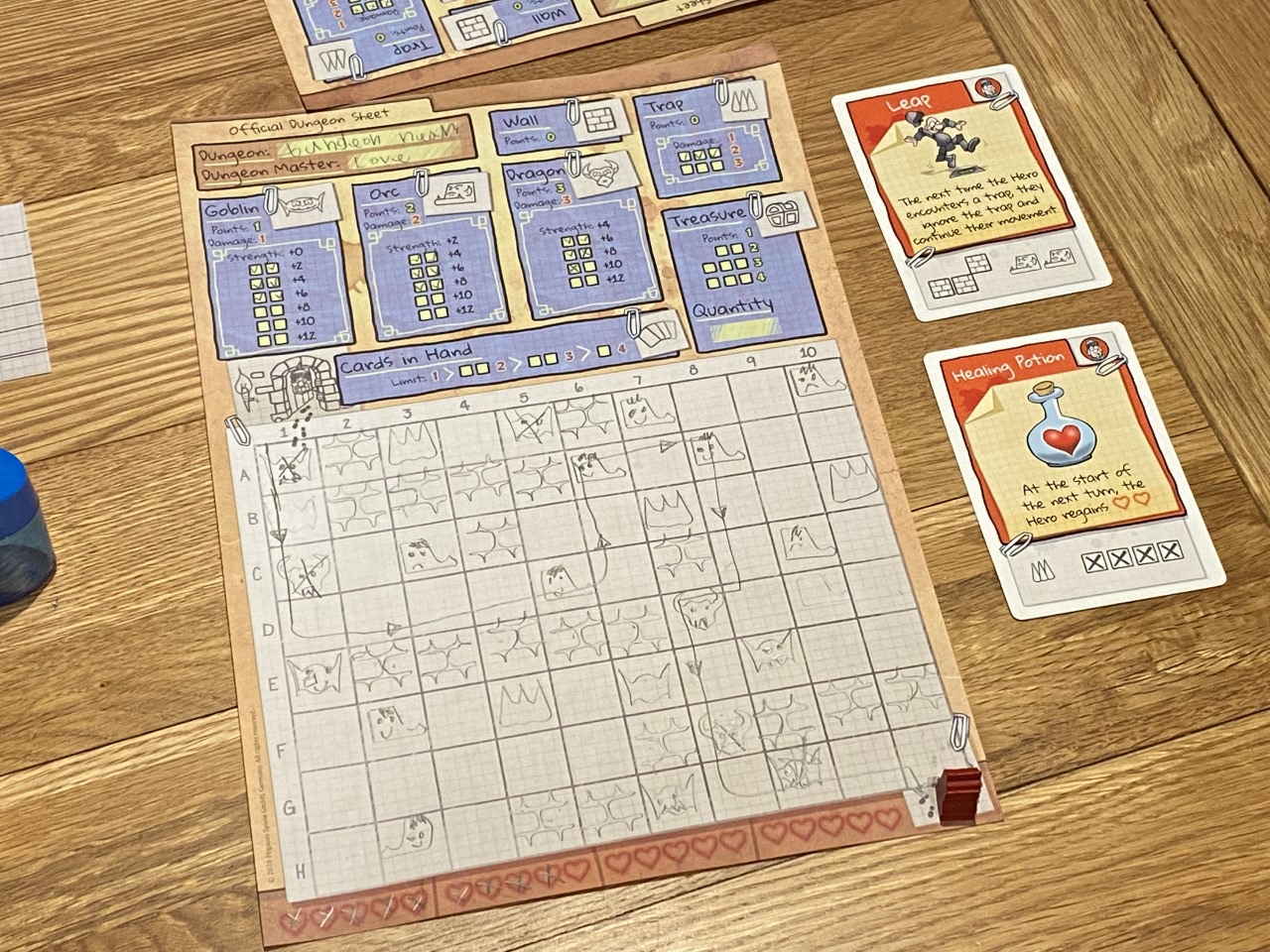 The reason for doing this is revealed in the second phase of the game, when each player passes the colourful printed sheet that they will draw their dungeon on to their neighbour. That neighbour then plots a route from the top left square to the bottom right — a route that a plundering hero will follow in the final phase of the game.

In this final phase, each player then takes back their own sheet and the players take turns to handle each “encounter” that the hero has, whether that be with traps or monsters. When a trap is met, the hero will simply suffer damage based on the strength (remember those upgrades I mentioned earlier) of the traps in that dungeon. Monster encounters are resolved by rolling two dice and then adding the strength of the monster (plus four, for example) to the roll. Rolling over twenty damages the hero according to the monster dealing the damage.

Once every player has seen a hero all the way through their dungeon – or said hero has been killed in their dungeon — the game ends with final scoring. At this point, each player adds up the value of their surviving monsters, the value of any treasure not stolen by the hero, and a bonus if the hero was killed. Finally, if a hero does survive, then the Dungeon Master that they escaped from will suffer minus one point for every point of health that the hero still has. 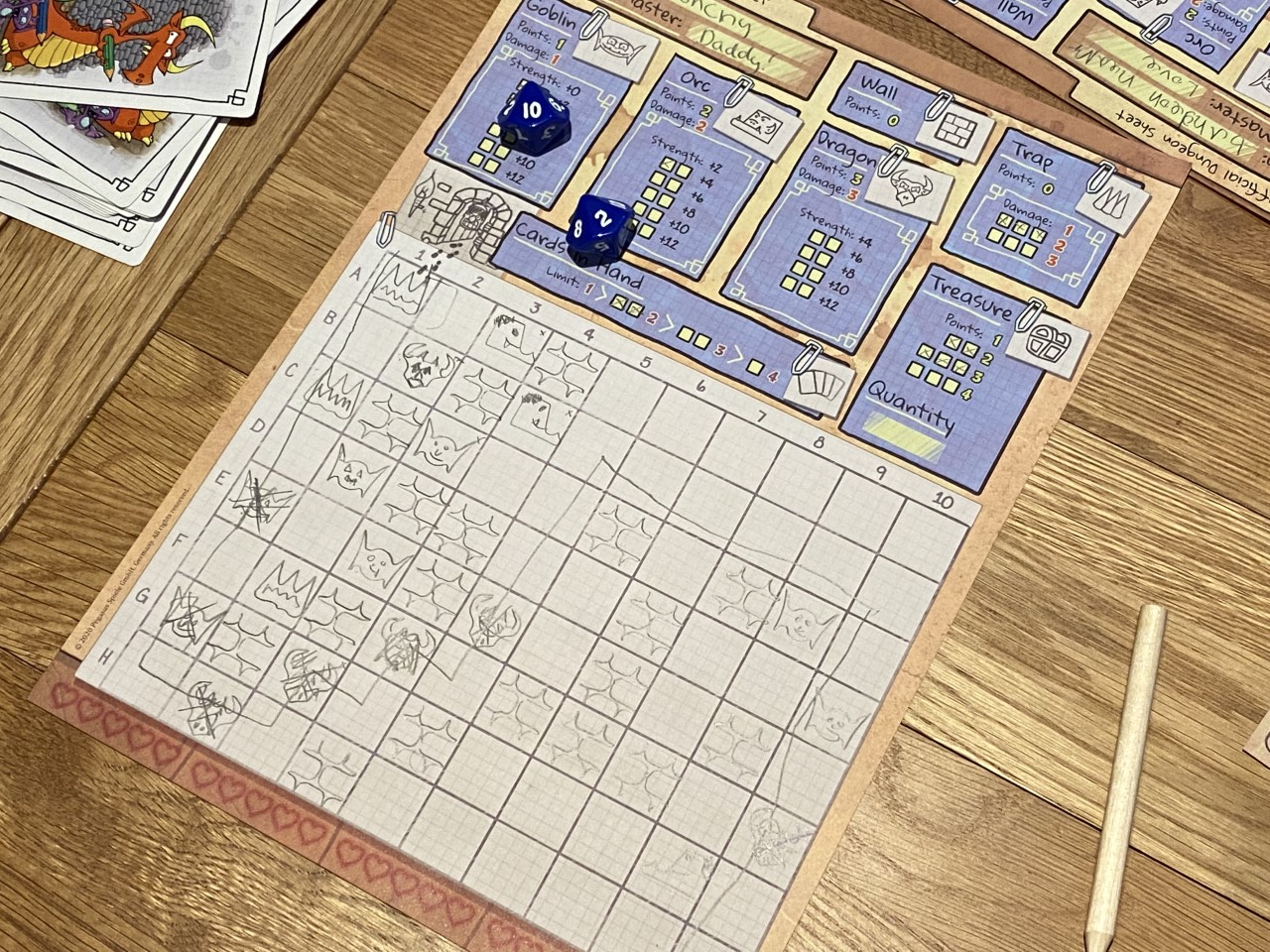 It’s hard for me to gauge how “cool” I am making this game sound, but just in case you’re in any doubt, Doodle Dungeon is really, really awesome. The building of the dungeon during the first phase is done via drafting – with a number of cards equal to the player count plus one being placed on the table and then chosen in turn order.

Each card shows two things — in the lower box, the dungeon items are shown. This is what you will be able to draw onto your dungeon as soon as the card is drawn, For example, a card might show two orcs, one goblin and a wall piece. Or, it might show three wall pieces, two upgrades and a dragon. Everyone, no doubt, will be keen to pick the best combination of symbols — in particular as their dungeon develops and space becomes limited (which only happens during the last third of drafting). 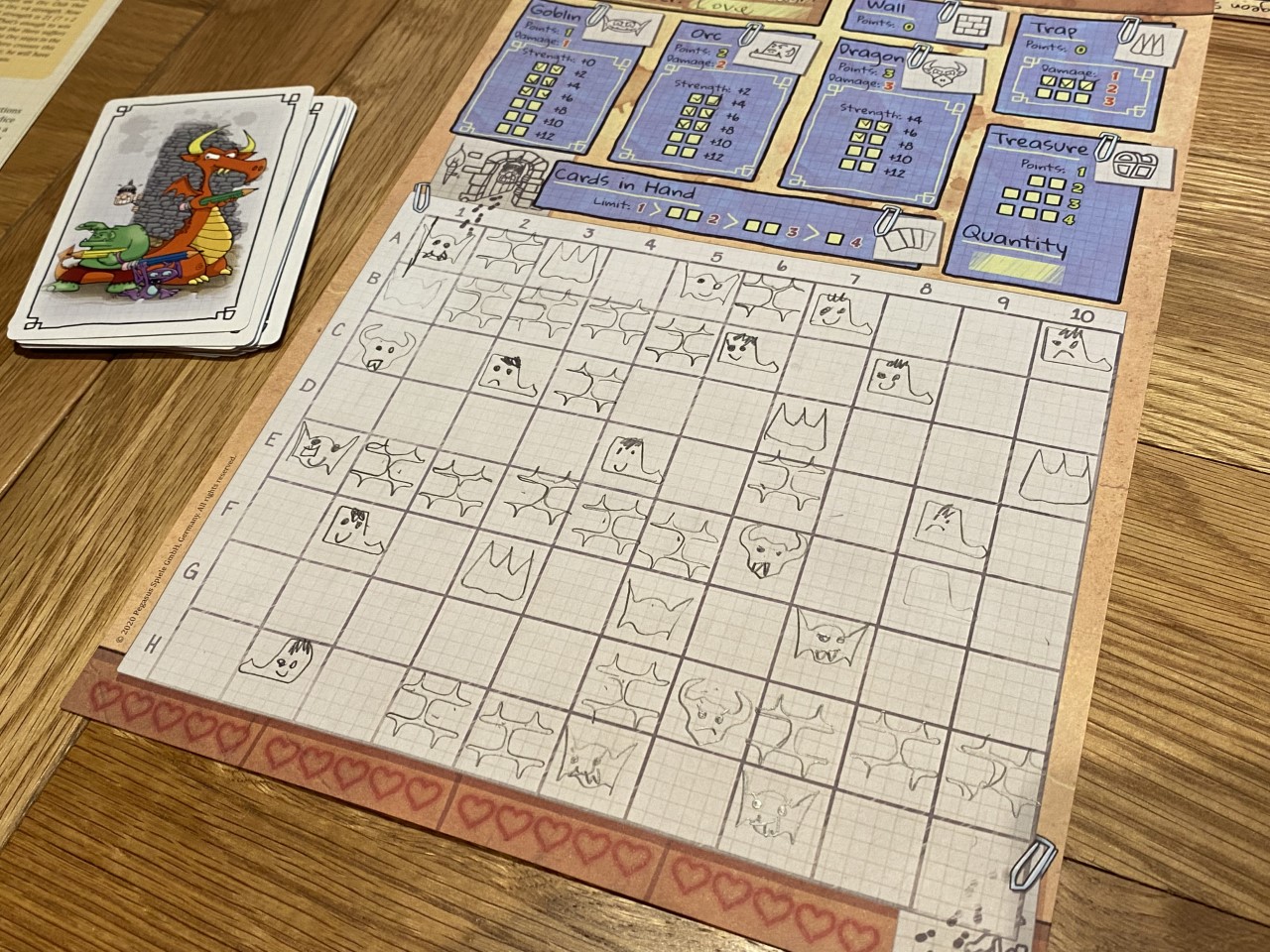 The added wrinkle to this draft is that in the top box on each card, there is also a second set of information that is used during the phase when heroes move through dungeons. Simply marked red and blue art indicates respectively whether a card affects a hero in someone else’s dungeon (strengthening that hero) or bolsters your own dungeon. You can imagine here how a really good card for the build phase might also be a weaker hero phase card, or vice-versa, and the decision about how to manage both dungeon and action card hand is a key one.

When it comes to actually building (or rather drawing) your dungeon, there is a pretty exhaustive list of rules to follow about where items can be placed. There must always be a gap between monsters and/or traps, and of course, walls can only be placed in such a way so that a hero can actually get from start to finish. If a Dungeon Master doesn’t have space to place a dungeon item shown on their card, then it is forfeited etc. These rules feel a bit “lengthy” at first, but within a few turns, they are quite easy to memorise. 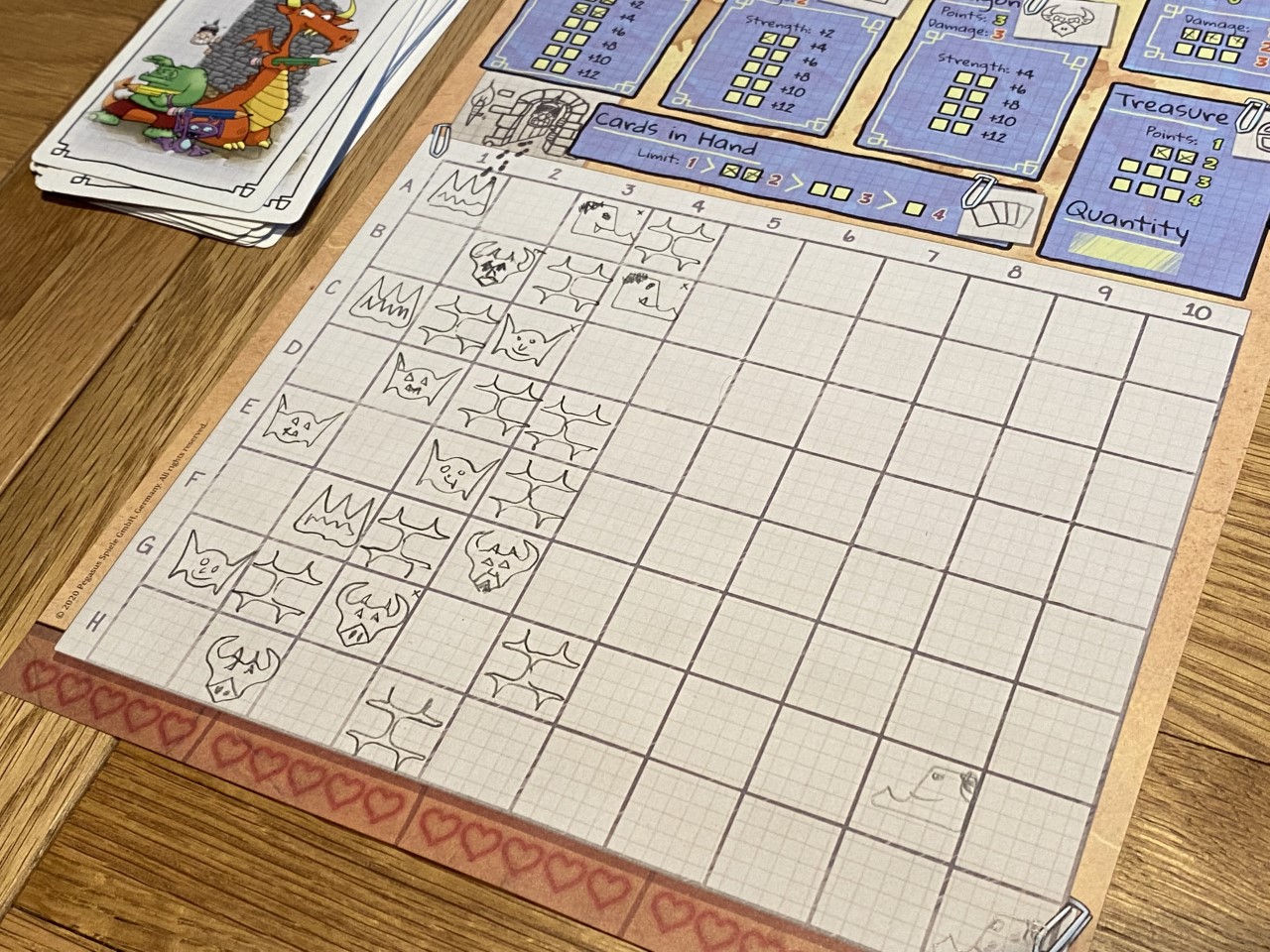 One of the cleverest features of Doodle Dungeon is how treasure chests work, and just as the drafting aspect increases interest for older players, so does this. When a Treasure Chest is shown on a drafted card, instead of being drawn onto the dungeon, it is instead secretly assigned to a grid reference. Only chests on spaces with monsters that survive the hero’s visit will score, but the value of each such chest can (just like monster or trap strength) be upgraded.

Again, this gives the player a choice. Is it worth hiding lots of treasure in the dungeon, perhaps in hard to reach places with tough monsters and investing upgrade points into them? Or would it be better just to focus on killing the hero? Or, why not do both — spread your options around a little bit? Thankfully, these are choices that kids can make as well — clear and not too complicated, with no explicitly better or worse choice (in most cases).

Everything looks great too. The dungeon sheets are attractive, colourful and filled with clear, concise information, whilst the cards are similar – all the info is unmistakably there, but there’s also space for a bit of cute, cartoonish artwork that sets the theme just right. Scoresheets, stencils for the dungeon components, pencils and a pencil sharpener that doubles as a first player token complete a nice, concise collection of components. 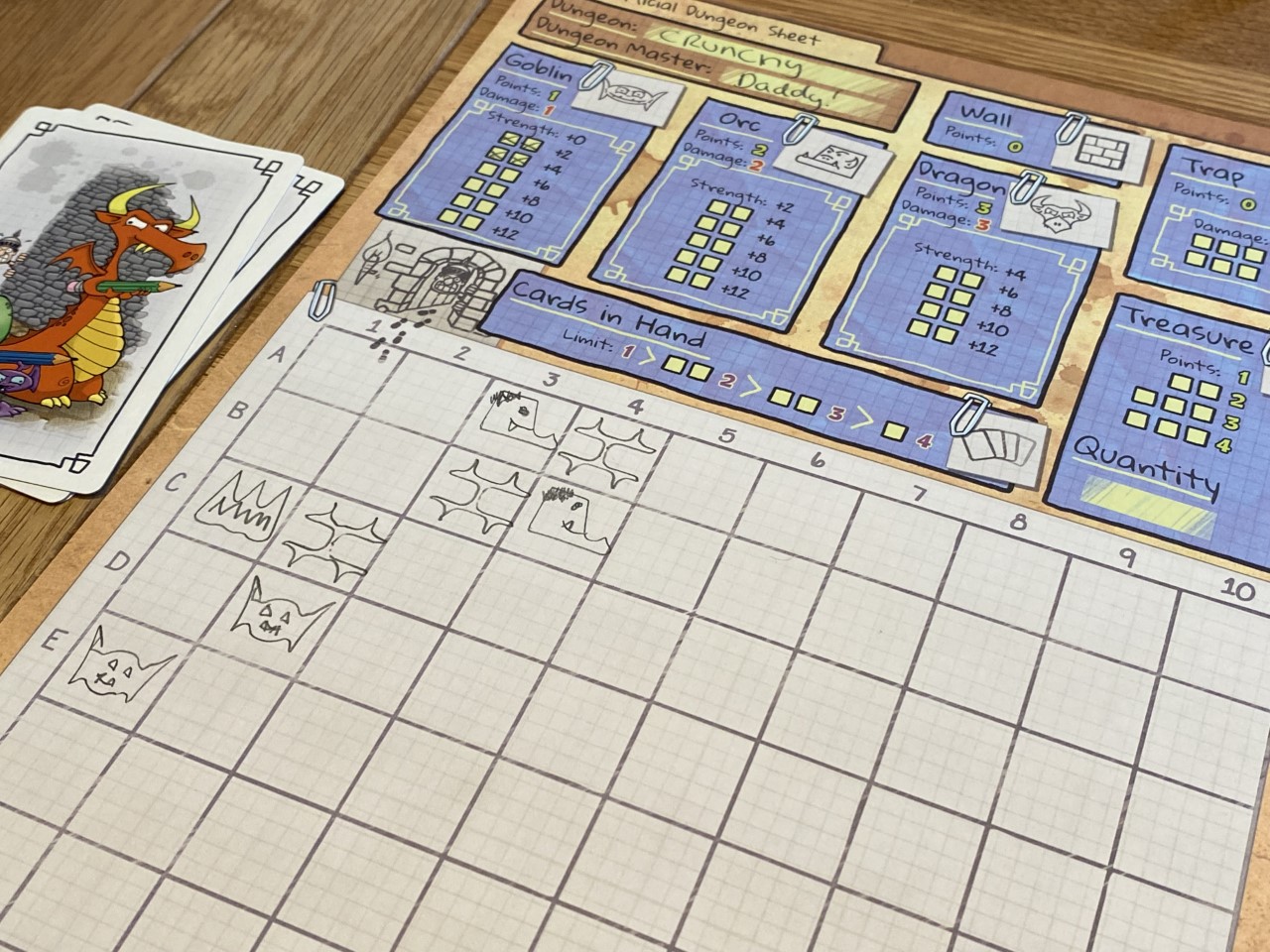 Initially I thought that Doodle Dungeon might be a simplistic alternative take on the ever-popular Roll and Write genre, however this assumption was very wrong. Instead, Doodle Dungeon is a clever game that stitches several independent phases of gameplay together clearly and thematically, without extending its play time beyond what a younger player can tolerate.

Better yet, because there are several reasonably deep strategies and considerations to bring together, older players will feel equally challenged. I have loved playing Doodle Dungeon with my family, because we all get along with it, and I’ve been surprised by how quickly the kids have picked up some of these concepts – which I look forward to testing in other games going forwards.

In short, Doodle Dungeon is a fantastic family game that may surprise you in ways you were not expecting. I wouldn’t go so far as to call it essential, but it is exceptionally good fun, and capable of entertaining almost anyone from youngish children to experienced players of modern board games.

You can find Doodle Dungeon on Amazon.