In medieval-set real-time strategy Diplomacy is Not an Option, the peasants are revolting and unfortunately for you, you’re the target of their discontent.

Sliding into the ‘base-building meets tower defence’ space repopularised by They are Billions, Diplomacy is Not an Option‘s campaign has you stripping the nearby areas of resources, building up a walled town and churning out enough troops and soldiers to hold off multiple waves of enemies. Fans of classic base-building games will find it incredibly easy to slide into its systems, with the fairly standard resource gathering, technology unlocking and base-building circuit already firmly in place… even if the Early Access version currently feels a little feature-light.

Perhaps it’s better to talk about where Diplomacy is Not an Option is different from its contemporaries. For a start, it’s running a 3D physics system which means that enemies and projectiles react in a slightly more natural way than the standard method. This adds in a satisfying level of chaos, with walls and trees blocking the archer’s shots, and making natural barriers like cliffs incredibly useful. Additionally, markets, which are an incredibly overpowered and essential part of surviving the long siege of endless mode, are Zepplin powered, and those detonate when they hit the ground, sending enemies flying. Similarly, the game’s magic choices include a meteor that sends enemies (and friendlies) flying in the air, which is fantastic to watch, especially when the enemy numbers climb up past the hundreds into the thousands.

And, the numbers do reach that high if you can survive long enough, or progress to the later stages of the campaign. That’s exactly when it all starts to click together and shine as well. When you’ve reached a point where you’ve stacked dozens of archers and weapons to the wall that you’ve been carefully laying out, and the enemies smash into it on one side, then another, and you’re moving units to and fro to cover where the enemies are strongest, then it really feels like its best version. At this point, it feels a world away from the starting point of each level, which has more of an Age of Empires feel to it due to the sparse world and fog of war. In truth, it plays much more like the defensive elements of the Stronghold series, but with the unit numbers massively ramped up. 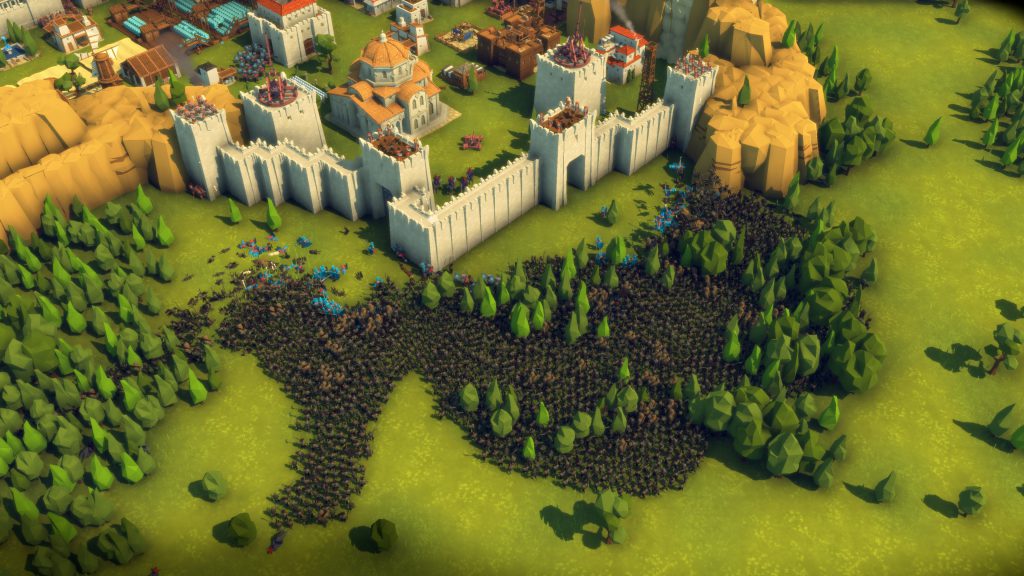 In this way it perhaps suffers a bit from the ‘start-up fatigue’ that haunts RTS campaign modes, the continual restarting at close to zero. Diplomacy is Not an Option does add in random groups of enemies around the map, however, which gives you something to do before the waves commence. This means that there’s an extra layer to the standard loop of RTS early-game basics. Rather than just setting up your resource gathering, clearing the fog of war using your units, finding nearby resources and maybe finding which directions enemy camps are based in, you can smash away at the smaller encampments while you wait for your resource counts to increase. Clearing these enemies is handy in more than just passing the time; they drop the only supply of mana (for your powerful magic spells) and if you don’t beat them then they’ll join into the final wave of the scenario level.

Diplomacy is Not an Option fuses together the early game of RTS with the mid-late game of Tower-Defence. It’s definitely one to watch for fans of either, especially as the developers have shared their ambitions to expand the units and building roster as it continues through Early Access.

Diplomacy is Not an Option is available now on Windows PCs.