Defend the Rook — Tactics, Tower Defence and maybe too much RNG

A great big bag of genres.

Defend the Rook is the new game from One Up Plus, the studio who brought us the underrated Dungeontop just fifteen months ago. Mixing the various flavours of roguelikes, turn-based tactics and board games with a seasoning of tower defence, is it the perfect recipe or did Defend the Rook need more time in the oven?

Defend the Rook plays like many other turn-based tactics games. You look down at your board from an isometric angle, with each of your four units having the ability to move and attack each turn. Enemies attack in waves, appearing from the edge of the board, with a boss accompanying the fifth and final wave.

In a nice twist on the standard tactics game, one of your units is the titular rook who must be defended in order to avoid defeat. Should your rook be killed, you are forced to begin your run again. While your rook has limited movement and a weak attack, it does thankfully have a comparatively large pool of health and an automated retaliatory attack that will immediately kill many of the weaker enemies that you’ll face.

Aside from your base units, you also have a small number of spells with various effects and a limited number of stationary towers that can be placed in certain places across the board. These can be upgraded between levels to increase their health, damage and, in some cases, add attack modifiers such as AoE damage. 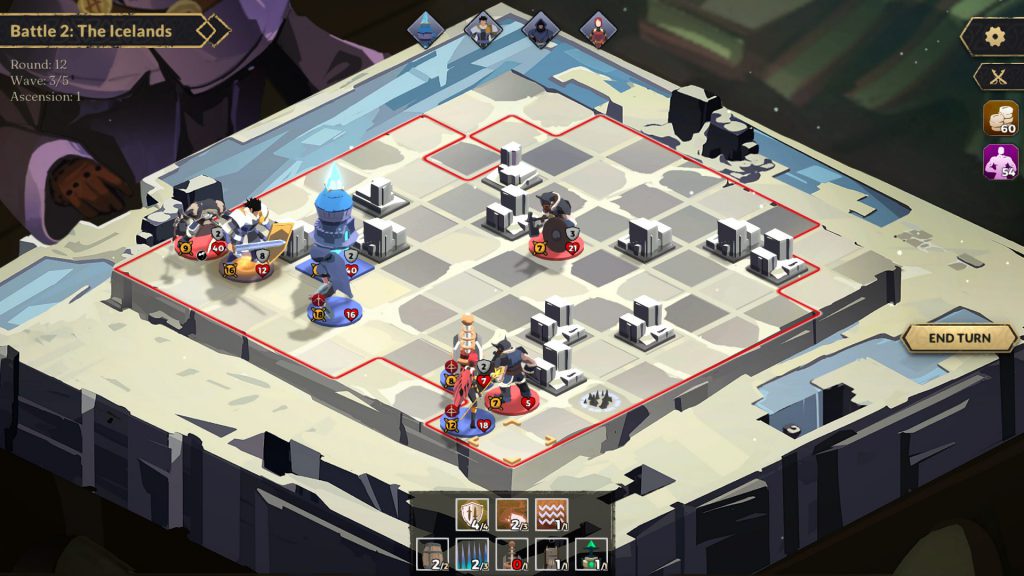 The units that you control, aside from the rook, unlock new abilities after each wave is defeated. You are presented with three possible upgrades, one for each of the units, and you can only pick one. In true roguelike fashion, there is heavy randomisation in the options presented, meaning that you’re highly likely to end up with units that play drastically different by the end of each run.

At first glance, Defend the Rook is a good looking game. Even though the character designs are simple, their hand-painted appearance makes Defend the Rook stand out from the large number of pixel-art games that are usually found in the indie, isometric tactics genre.

Animation is minimal however, with your characters moving as though chess pieces across the board. This doesn’t particularly detract from the game — your pieces turning to stone after they have completed your turn is actually a nice touch — but it does feel as though the developers referring to this as a board game is more of an excuse not to animate the characters as, other than in the framing of the story and that it plays a bit like chess (which is true of most isometric tactics games), there’s minimal tabletop influence to be found here.

The story itself is about as good as the story in any tactics game. It adds a nice favour to the proceedings, with a decent twist in its tail, but it’s a twist that you’re going to see again and again, as the story doesn’t change a great deal between runs. I also found the framing to be totally superfluous but, since you’re going to be skipping most (if not all) of the dialogue after your first run, it doesn’t make a whole lot of difference. 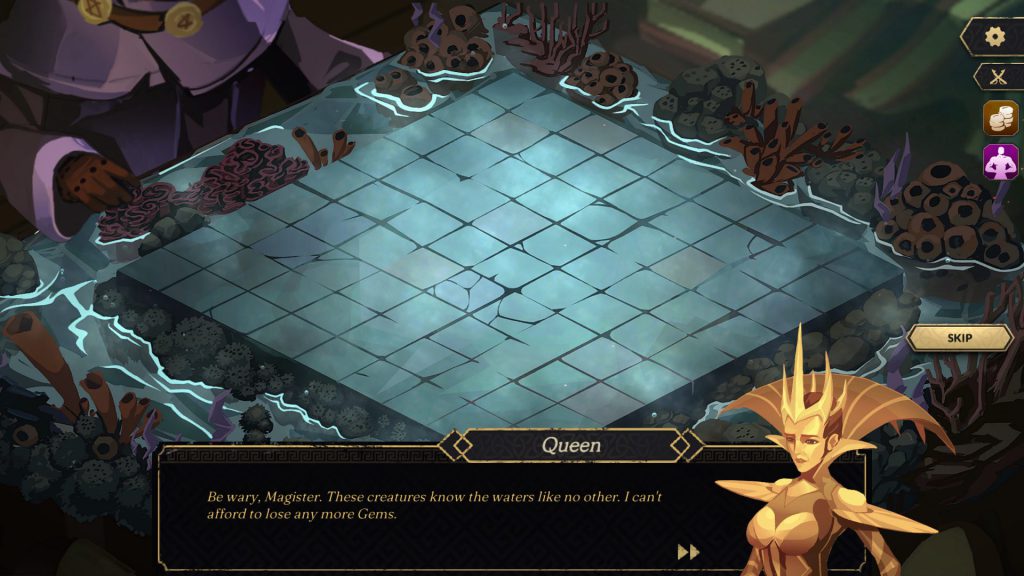 The gameplay itself is fast, and it feels good to quickly click through your turns, despatching enemies left, right and centre. Unlike some turn-based tactics games (looking at you, Into the Breach), you won’t be sitting scratching your head, trying to work out the best – or least bad – move that you can make. Your units’ attacks are of the basic melee or ranged variety; move up to four spaces, attack for ten damage for example. Some turns you almost play automatically, as the luck of the RNG has left you with a single option of who to attack. This all begins to change as you start to unlock upgrades for your characters.

At least, it does some of the time, and this brings us to what is both the greatest strength and the greatest weakness of the game.

The real interesting decisions come when you get the chance to upgrade your characters. There are some very powerful and rewarding synergies to be found. For example I upgraded my rogue character so their attack power increased when they killed an enemy, then coupled this with an upgrade that allowed him to pass through enemies and deal damage to them as he did so. Once I’d added a couple of movement upgrades in there, this led to him almost doubling his attack power each turn!

When this goes right, the game really starts to come into its own. It’s such a joy to grow these units from almost cookie-cutter clones of each other to end up so completely different from one another, bringing a real depth to your tactical options. When you’ve built an interesting squad, it’s such a moreish experience. When it all works, I would find myself eagerly clicking into the next battle as soon as I’d beaten the last.

The problem is, more often than not, it doesn’t work. 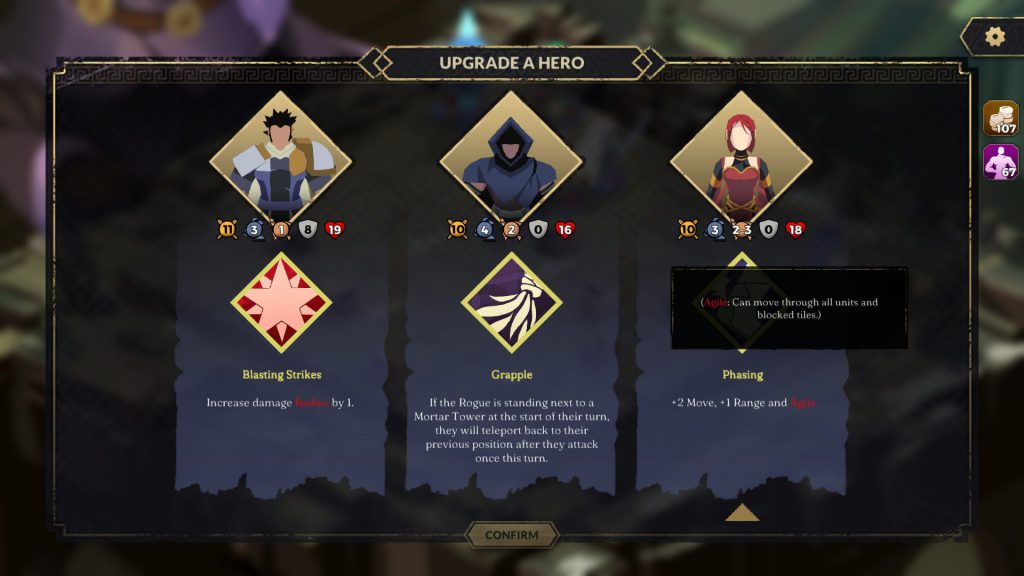 The game will sometimes replace an ability upgrade with the option to regain health, but this is also unbalanced and frustrating. On one run I was repeatedly offered health for my Warrior who was on eighteen health, but not for my rogue who was on four.

This, more often that I would like it to, leads to actually only being left with a single viable option at the upgrade screen, robbing you of one of the few interesting strategic decisions that the game can present you with. Even worse, sometimes they’re all junk. It certainly feels as though the game would be better with a great number of the potential upgrades being removed from the pool, or else for more synergistic upgrades to be added and weighted in such a way that you’re more likely to be offered upgrades that work well with those that you already have.

Another area that could be improved is in the way that you control your units. There are a number of occasions where it is important for your unit to travel over certain tiles and avoid others, for example if there are enemy traps or, as in the above example, if you want to run through enemies to kill them all with your awesome rogue powers. You can’t do this though, not unless the game’s pathfinding decides that particular path is the most optimal for you to move. Waypoints would definitely be a useful addition to the game.

What makes all of this so frustrating is that there’s so much to love about the game.

When it goes right, you really grow connected to your units because you’ve made them who they are. There’s some great variety in the levels and enemies that you’ll face, with bosses in particular being a real highlight in terms of both their visual impact as well as how you have to change up your tactics to deal with them. I haven’t even mentioned the inter-level upgrades and meta progression between runs, each of which add flavour and depth to the game. The tower defence element, while limited, does add quite a bit to the depth of decision making during your battles.

There are a lot of pieces that the team at One Up Plus is throwing into the mix, and they’re so close to pulling it all together. It just feels as though it needed a little more time in the oven.

Overall, though the first bite was delicious, this cake is undercooked. It’s gone all soggy at the bottom, I’ve eaten too much, and now I’ve got food poisoning.

Defend the Rook is available now on PC.