Yes, it’s a bold claim to state that any game, let alone one as unassuming as Celtic, is as good as or even better than the legendary Ticket to Ride. The truth is though, I am so, so bored of Ticket to Ride that I’ve been desperate to find a gateway-level alternative to it for such a long time, and I think Celtic offers exactly that.

To make a great gateway game, you need a few key ingredients. Gateway games are all attractive, simple and they generally have a theme that a lot of people can understand and relate to. For Ticket to Ride, it’s trains, whilst in Celtic, the theme is, slightly oddly, Germanic noble families vying for control of their local tribe. 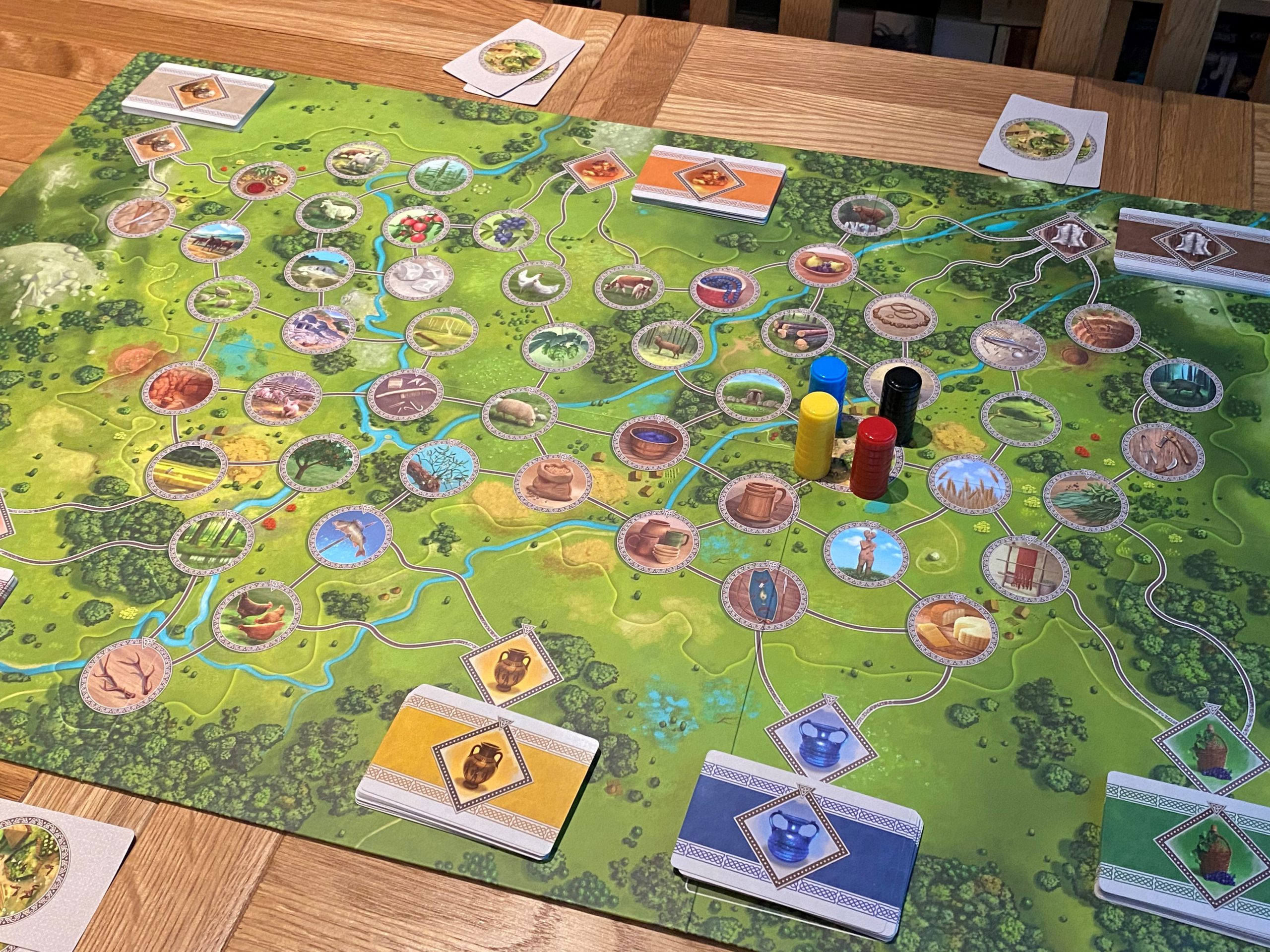 But don’t let that put you off, because what Celtic might lack in universal appeal, it more than makes up for with the outstanding quality of its components and gameplay that is at least as simple as Ticket to Ride, whilst also being much, much deeper for those who wish to take a longer term view.

Mechanically, Celtic works like a game called Istanbul (for those who know it) with each player controlling several pawns (eight, to be exact) that represent their family members. These pawns will move around the huge, beautifully illustrated map in a sort of convoy, with the aim of reaching specific spaces that show a certain resource or trade good. There’s a twist to this movement which I’ll explain in a moment, but before I do, I just want to tell you why you’d actually want to move to some of these locations.

The objective in Celtic is extremely similar to that of Ticket to Ride, which is why I keep making the comparison. To simplify the explanation, each player is dealt two objective cards at the beginning of the game, and on these either two or three locations on the board will be shown. If that player can get one of their family members to each of the spaces shown, they can (thematically speaking) collect those goods, send their family members back to the village and score that objective card. 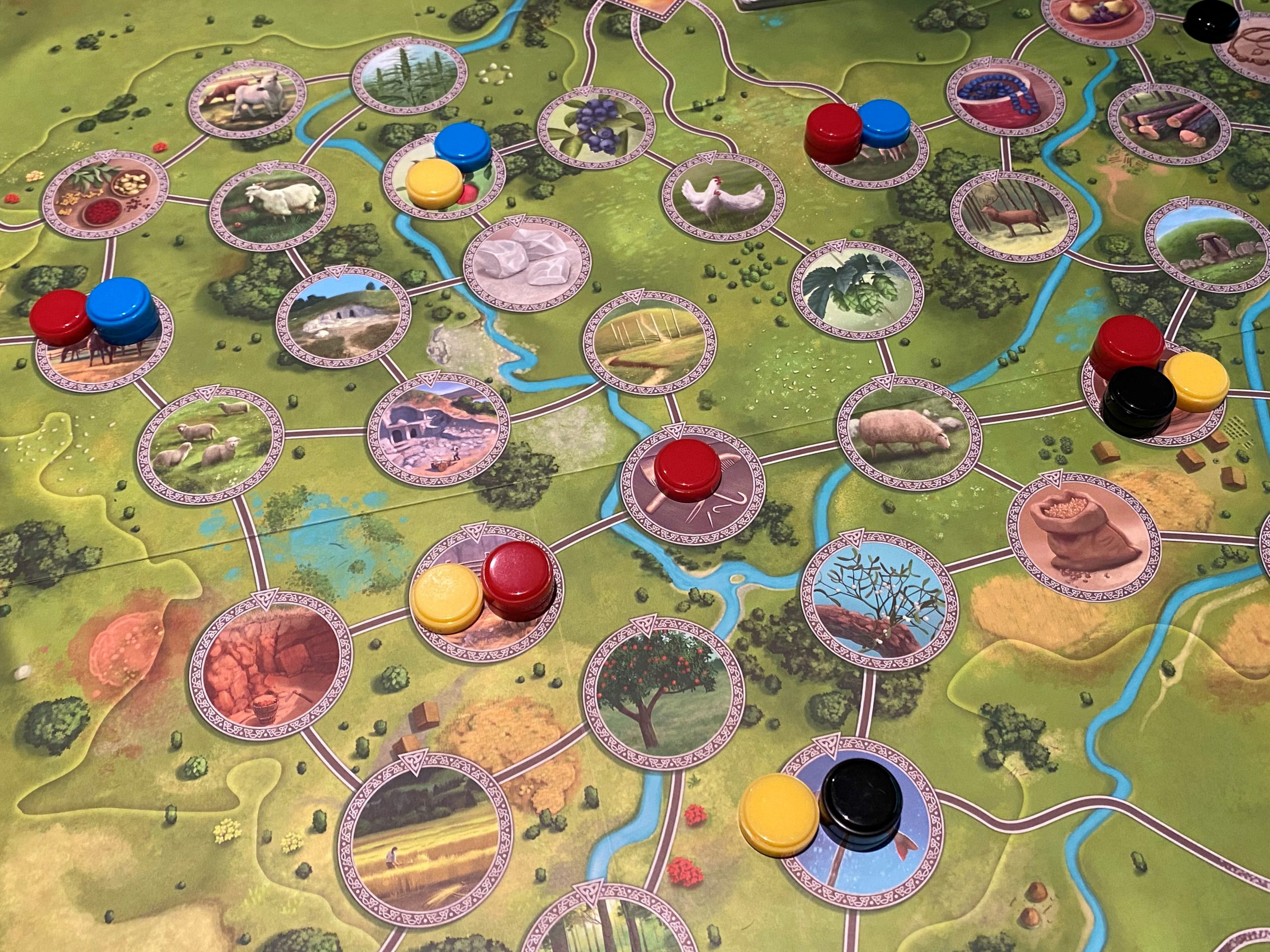 Upon doing so, that player will then place the completed card face up in front of them (each card being worth 15 or 20 points depending on whether it has two or three locations shown on it) and draw another one. Upon drawing their fifth card for the game, a player may draw no more, and when a player completes that fifth objective card, the game ends immediately.

Now if these objectives were the only scoring element to Celtic, then it would be fairly easy to figure out who wins, since the scoring variety among cards is so minimal. However, eight spaces on the board include unique resource collection points, where a player can return a family member home and take a card of the matching resource. If you happen to have five family members in such a space and you send them all home, you’ll even take five of the resources in question.

Come the end of the game, these cards will be sorted into piles by each player. Their largest pile will be worth the least points per card, whilst the card they have fewest of will be worth the most. The points earned this way can and often will amount to at least the same as those on objective cards, and if a player chooses to prioritise them, sometimes more. If you haven’t guessed then, the really interesting bit of Celtic when it comes to scoring is not what you know (the scored objectives) but what you don’t know (the trade goods in hand). 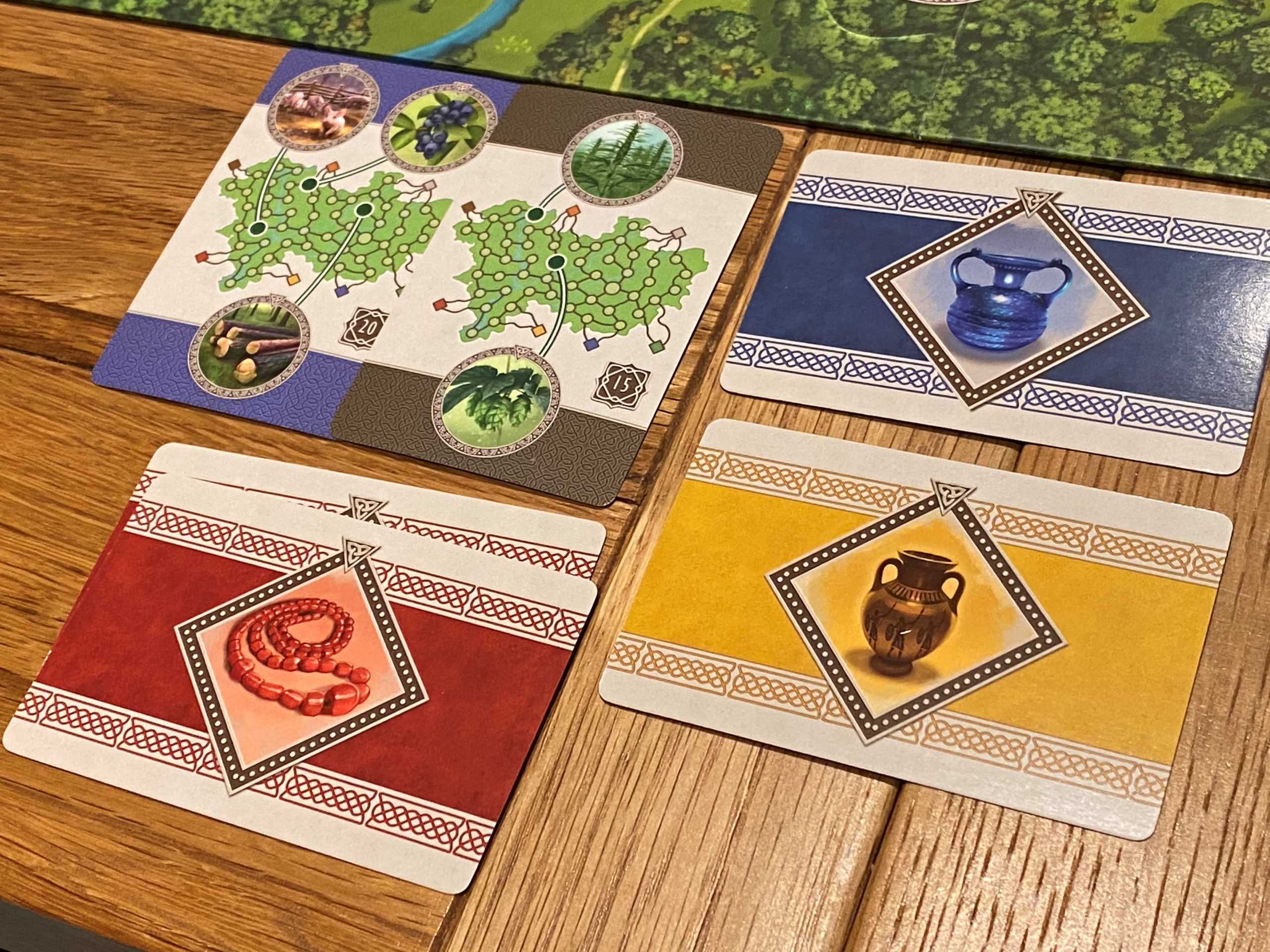 I mentioned earlier that movement in Celtic, is similar to another game; Istanbul. For those unfamiliar with this other title, also published by Pegasus Spiele, Istanbul features a movement system that has players “dropping off” their own family members as they move around the board. In Celtic, the system is similar, and on their turn a player may move any number of their own pieces from a space up to two spaces — this might be all eight, or it might just be two or three (with one or more staying behind.) 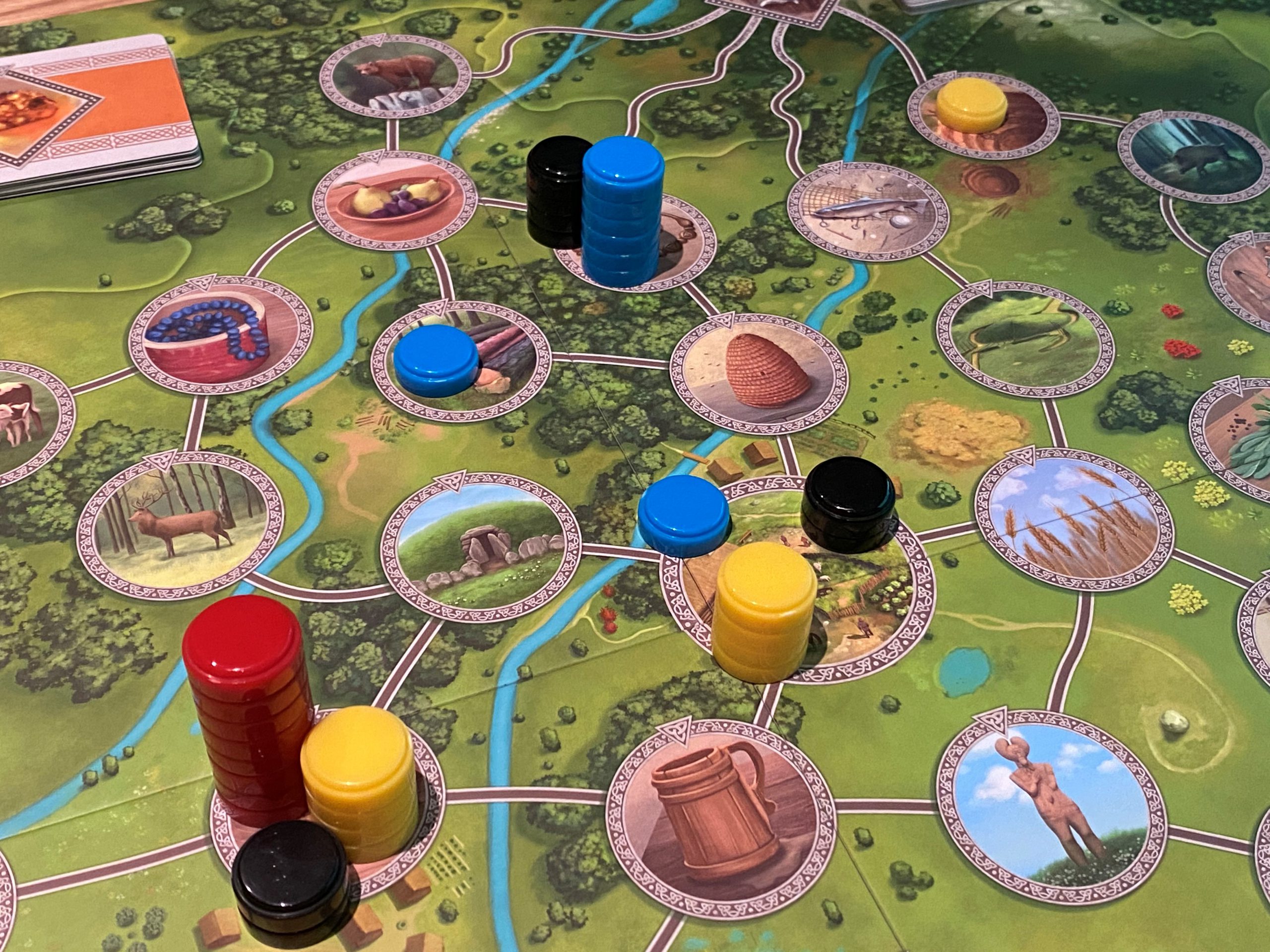 So, when playing Celtic, you have two simple scoring priorities — firstly, to get your pawns to the places on the board that will score objectives for you, and second, to collect a reasonable variety and number of trade goods. Actually achieving these things is simple, but slow, if you take the movement system at face value and try to focus only on your own turns.

Celtic, more than any game that I’ve played in ages, keeps every player fully engaged at all times during the game, because essentially any other player’s turn might also be your turn. The great thing about the objective cards in Celtic is that so few of them share locations, so quite often, you’ll be asking yourself if you want to hitch a ride closer to your objective, rather than directly to it, and sometimes you’ll even be aiming to move the same pawn(s) several times in one round by anticipating your opponents moves and trying to jump from one group to another.

Now, anyone who has read my reviews will have noticed that I often talk about themes in games and how that comes through. Where Celtic is concerned, you can really imagine this idea that the old tribe leader has died, and the whole community is gathering this huge variety of materials – foods, offerings, drinks and goods of every kind — all together to both celebrate this former leader and to choose a new one. 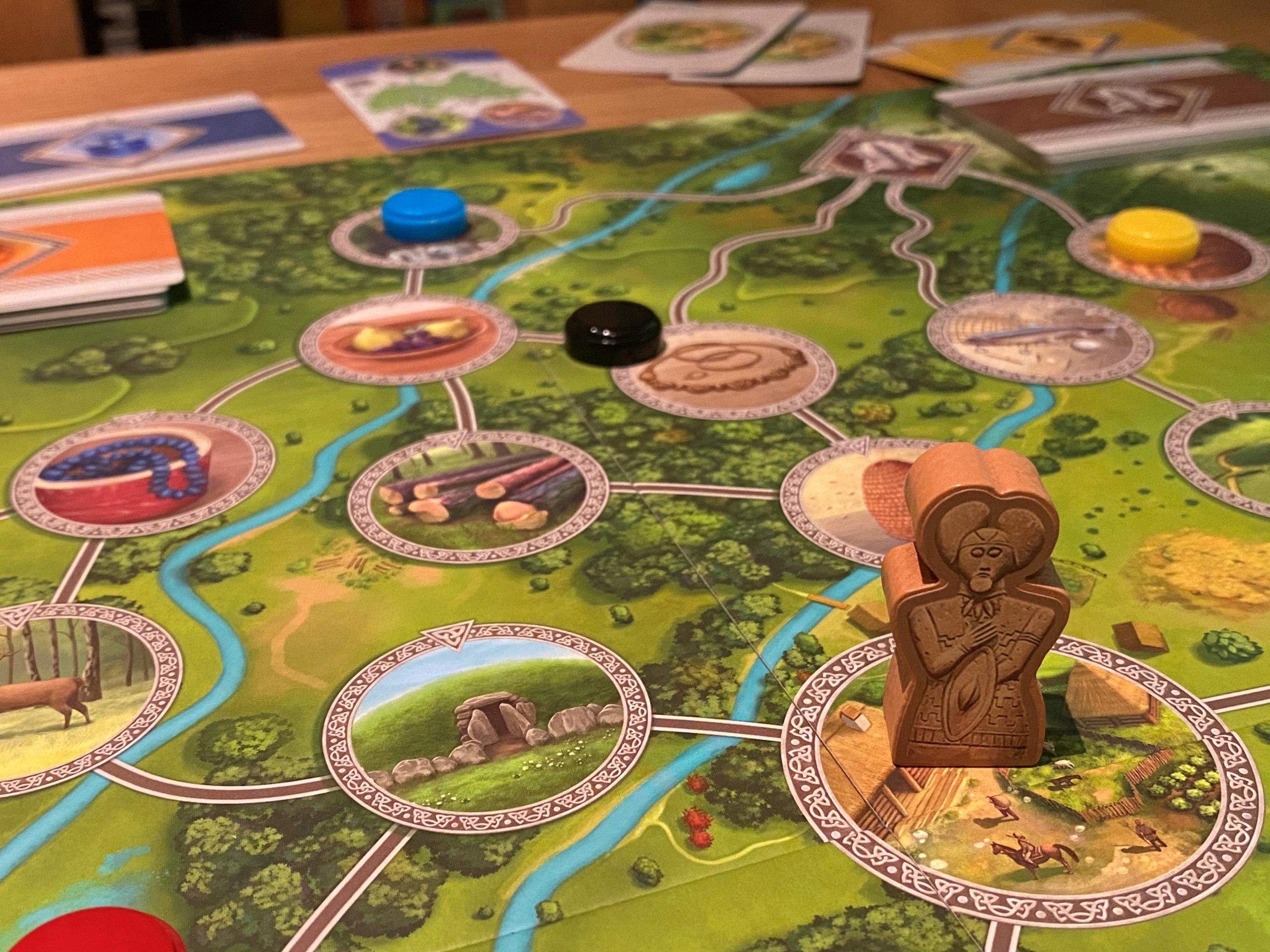 The gorgeous, bright artwork reminds me of Bilbo’s party in Peter Jackson’s Lord of the Rings: The Fellowship of the Ring, and the movement system here invokes this idea of perhaps a younger member of the family being sent to travel with a neighbour, only to then pick up the trail with a distant cousin for a while before arriving at the weavers house.

Don’t get me wrong; Celtic is really, fiercely competitive, but it focuses very much on the gentler, more cultural side of celtic life, rather than the more warlike and combative view that we often see. It’s a fantastic board game that ticks all the major boxes for me in terms of how it plays, how easy it is to learn, how much depth it has and how it makes me feel. Celtic is the best game that I bet you’ve never heard of, and I urge you to try it if you get the chance.

You can purchase Celtic on Amazon.