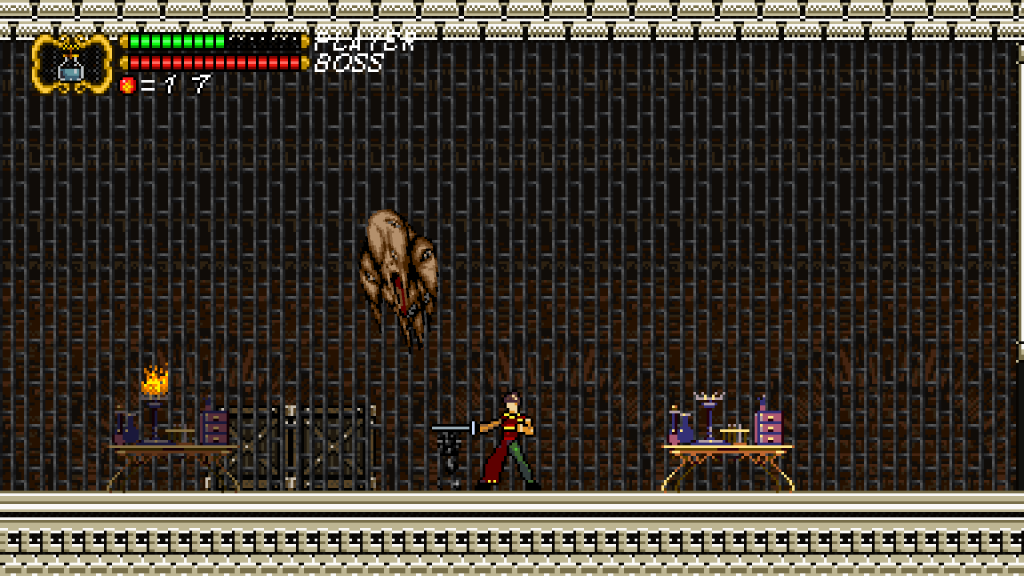 Citadale: The Legends Trilogy includes all three chapters of the Citadale experience – as released starting from last August – a very quick turnaround indeed.

Each of the chapters follows the ongoing saga of the Dorleac family. Similar to how Castlevania, a series the game lends more than a simple nod to, follows the Belmonts. As a matter of fact, it’s hard to describe Citadale without referencing the long-running series, still, here goes.

As each of the game’s protagonists you make your way through haunted, twisted locations, battling undead fields, bats, and other nasties, as well as making your way through some jumping, platforming puzzles, and facing off against bosses. In many ways it’s a game about timing, learning the swooping of enemy attacks, and the best time to counter them; especially in the case of those aforementioned bosses. In that oft-celebrated way of old, the onus is on your timing to take down the enemies, although you do get a few special items -like Shuriken & Throwing Axes- along the way, which can be boosted up by spending Soul Orbs found around the levels. Special items like Shuriken

Unlike many series, due to the quick turn-around on their production, there’s not really much in the way of technological improvement as the chapters go on. There’s little in the way of story or exposition in the game; as a matter of fact, it was only through the game’s manuals that I remembered the character names, and the name of the trilogy’s villain – Lord Rhogul. 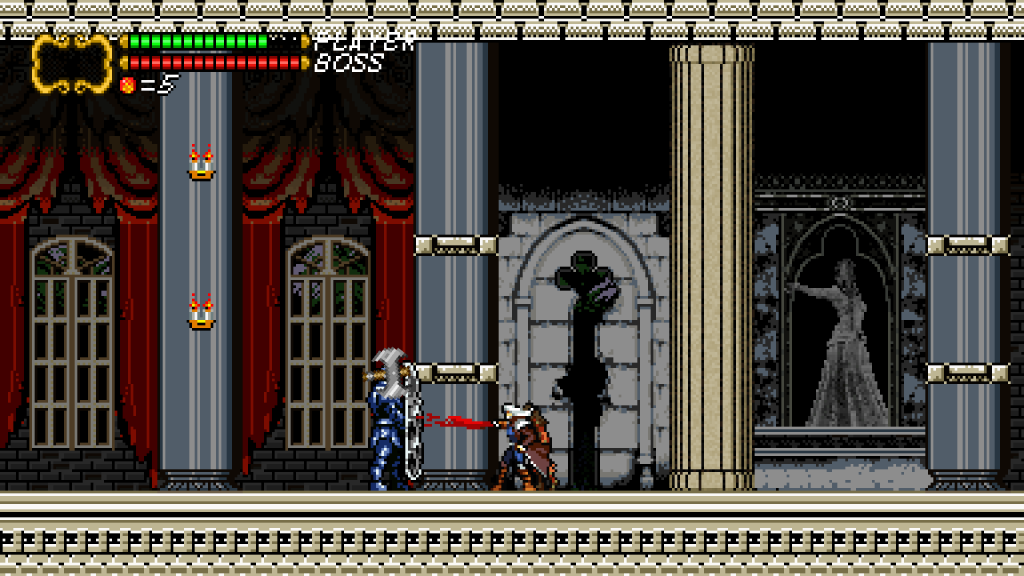 The game actually blesses you with unlimited lives, although you do restart back to the checkpoint; it’s an odd, but welcome system, as the character’s health can dwindle down fast as you learn the game’s timing and platforming aspects. At first quite a few hitboxes seem completely off, however once you’ve found the beat most smaller enemies are easy to best. A frustration does come from this, while each of the chapters are relatively short -as long as most old games, maybe two, three hour’s play apiece- there is no save system — you shut down the console, you lose the progress.

That said, once you’ve experienced the steeper learning curve of the first chapter, it’s only really the respective bosses that cause any major hardship when it comes to progression. The first chapter (Gate of Souls) which follows Sonja Dorleac, is undoubtedly going to remembered as the hardest, not only due to the adaption time required to adjust to the style of play, but because of several of the bosses. The game’s third boss, a giant worm that you fight across a bridge, completely stumped me for far too long – and I hold that it’s the hardest the trilogy has to offer.

Chapter 2, Curse of Darkness, which follows Sonja’s son Gabriel as he seeks out his missing brother. and Chapter 3, Legacy of Fate, which sees the next generation setting off to best the series’ foe, both felt vastly more refined; and almost as though they were designed at the same time. Bosses and enemies increase in difficulty on an appropriate level, with the yo-yo-ing difficulty being the one thing I hold against the first entry.

Designed in similar style, in quick succession the trilogy’s nigh identity to all bar the players. The second and third entry have a feature where if you get enough of the previously mentioned orbs then you’ll actually restart at the boss, rather than start of the chapter, should you fall in the boss (which would have helped in one). Those orbs are tucked away throughout the levels, but most regularly found by smashing torches. 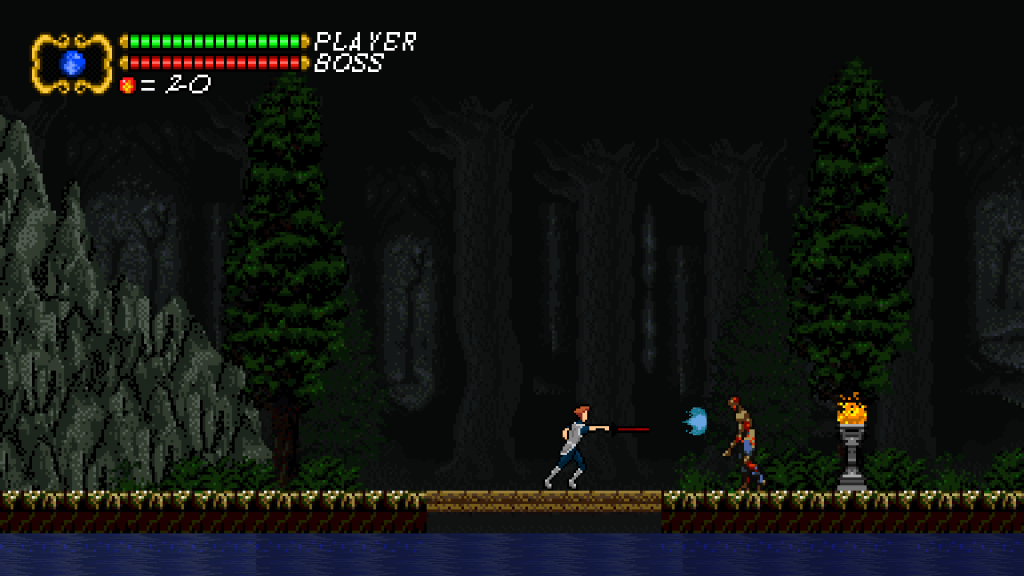 Due to the fact that a lot of items and upgrade orbs are carried by enemies, the game interestingly challenges players to defeat as many enemies as possible, as opposed to simply dodging them. In that old-school manner the enemies regularly march to their death, falling down holes or walking off screen, should they fail to connected with you on first pass. The infinite lives that the game offers up actually assists in this way; albeit as a double-edged sword. Repeating the level (after a death) if you have the time and patience to go through it over might get better results – or you might lose more health in chasing down those baddies.

The retro game aesthetic, specifically the visuals and music, were really good, but, while so closely mimicking earlier titles is certainly a good way to trigger the nostalgia glands in the bones of old gamers, it also works against the game as a large section of gamers associate pixel/retro style with low developer effort. The music, chiptune, was really good, although not for everyone’s ears — my girlfriend asked me to mute the telly as it was winding her up. The torture we go through for our loved ones.

As a matter of fact, the whole game was really refined. I did have a few issues wherein the aerial attack wasn’t triggering as a jumped, there was also the fact that the character in the first seemed to move in a juddering manner rather than a run; outside of these there wasn’t really anything that stood out as a problem. In many ways, it’s perfect for someone returning to gaming after a 15 year hiatus — the difficulty (outside of the first game) is a steady climb, and the platforming never reaches a point where you are pixel-jumping… thankfully.

Everything that I played in the three chapters seemed like the developer took a great amount of joy in creating it; from enemy types to bosses this game positively reeks of a person who loved gaming in the 80s,

Note: I played through this trilogy on the Wii U, apparently the game is not yet finished, however I’d be very interested to find out what the developer feels they need to finish off. The trilogy is set to also launch on PC, later this year.

Stick it to the Man — Switch