Carrion is a short, visceral metroidvania that turns the tables

Over the course of about six hours, Carrion will desensitize you to all normal human emotions and actions. This is a game that makes it so easy to slip into the squelching tentacles of its otherworldly protagonist that when you put the joypad down, you’ll wonder why you can’t simply walk across the ceiling and devour your pet cat in order to double in size,

Presented in the kind of extremely popular pixel art style — that looks a bit retro, but with a much smoother animation style — Carrion opens with the player jumping straight into the role of a kind of bleeding, red mass of tissue — it’s only features the tentacles that shoot outwards as it moves around the map and one or more sets of jagged white fangs that enable it to chow down on any living creature it comes across. 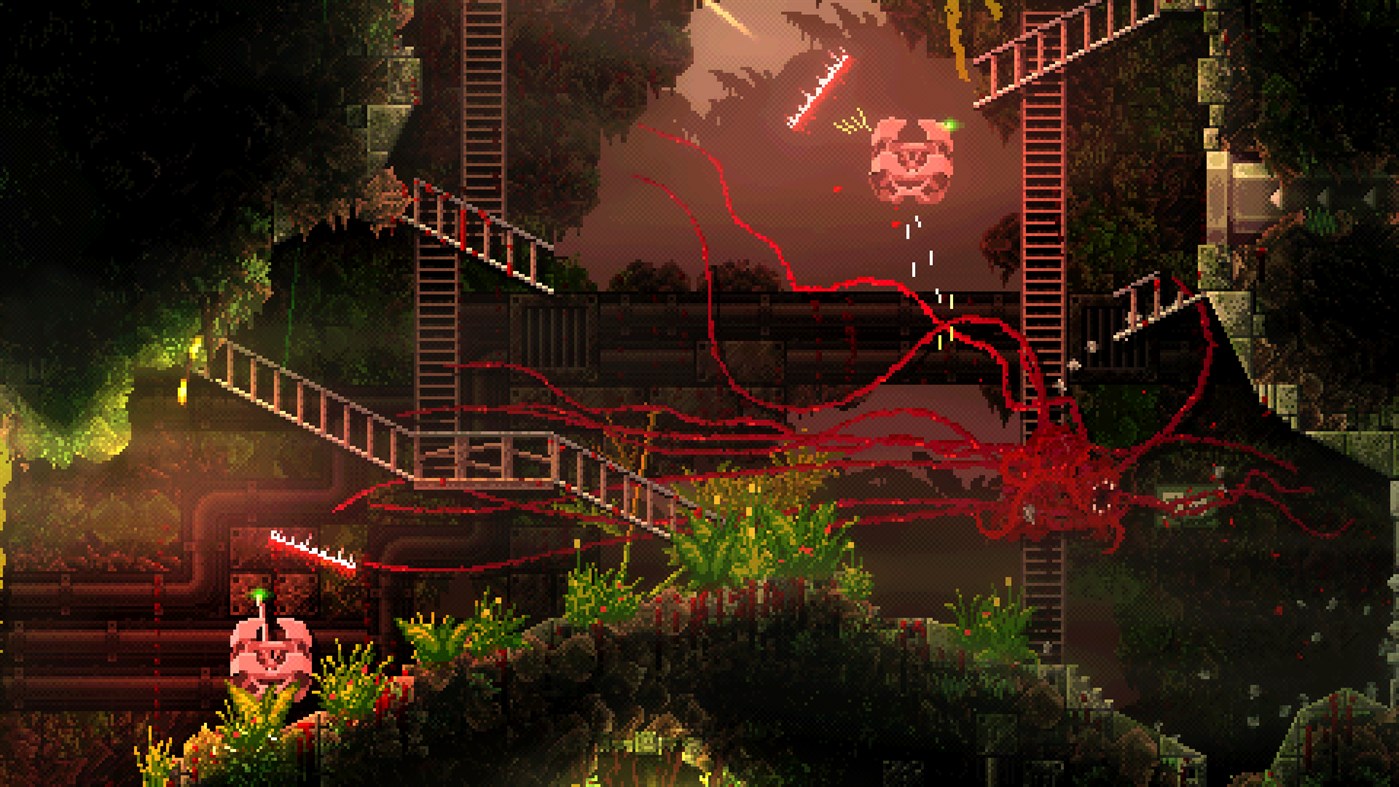 A few shakes of the stick later and you’re out, freely using the left stick to move around the screen in the most natural way I could possibly imagine. I need to elaborate here a little bit because the movement in Carrion is just so, so good. Our creature just hangs from walls or pulls itself along the ground or ceiling in a completely effortless way.

The way the tentacles shoot outwards to enable this movement just feels so right, and the immediate ability to just go anywhere feels empowering. What Carrion does even better, however, is restrict access to new areas through a number of interesting methods, even despite offering such freedom of movement. 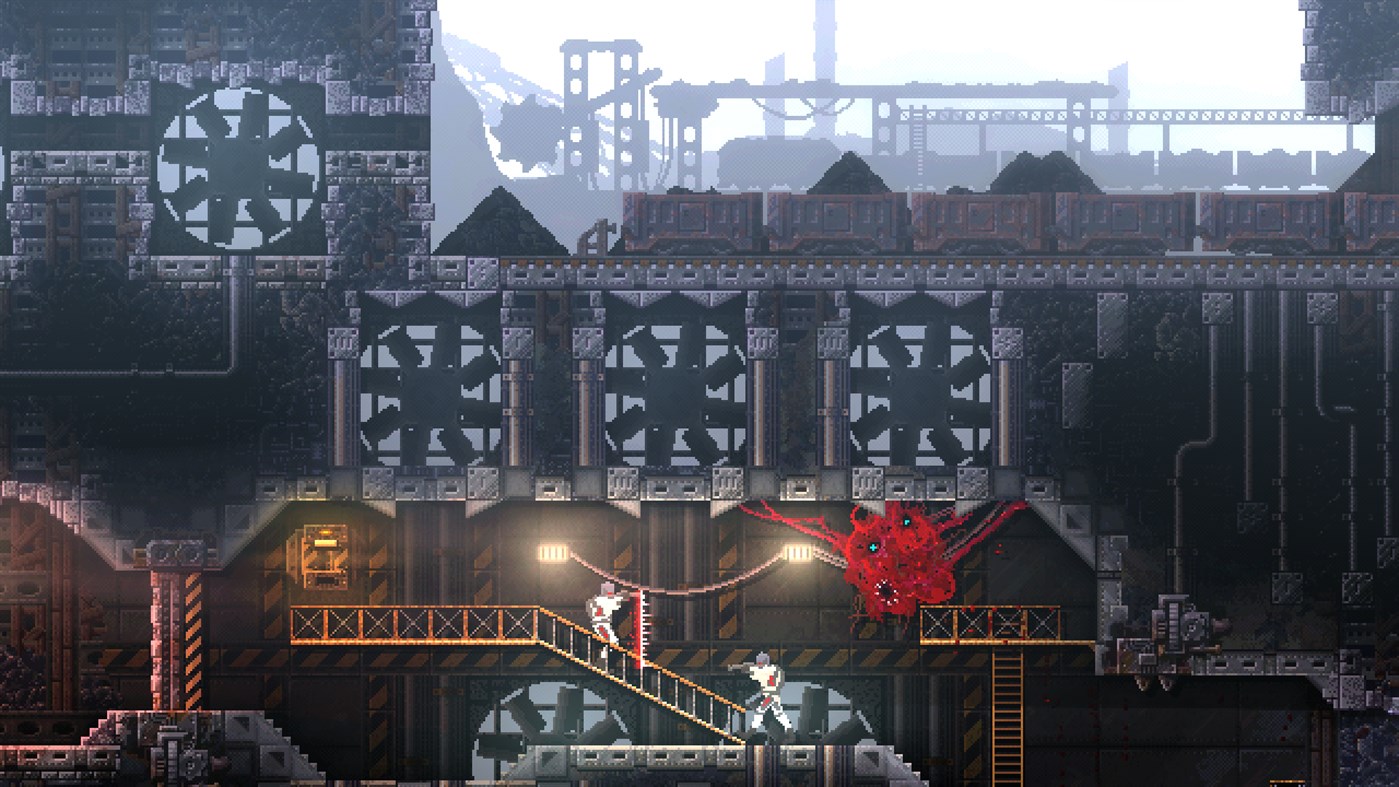 The other thing our creature can do initially is lash out at the human guards, scientists and other workers who inhabit the labs, mines and research facilities of the game. Once grabbed, the average human will quickly be drawn in and ripped in half — adding biomass to our monster. The longer the game goes on however, the more resilient the enemies become, with guns and electric shields the early problems, and powerful drones and similar presenting themselves later on.

As our creature explores the environment — without any clear objective or written direction — it discovers various vials that contain new powers. A sticky slime that works like Spider-Man’s web, or a charge ability that can bash down doors are the first two examples. These power-ups provide access to new areas, but also offer new ways to defeat enemies for the creative minded. 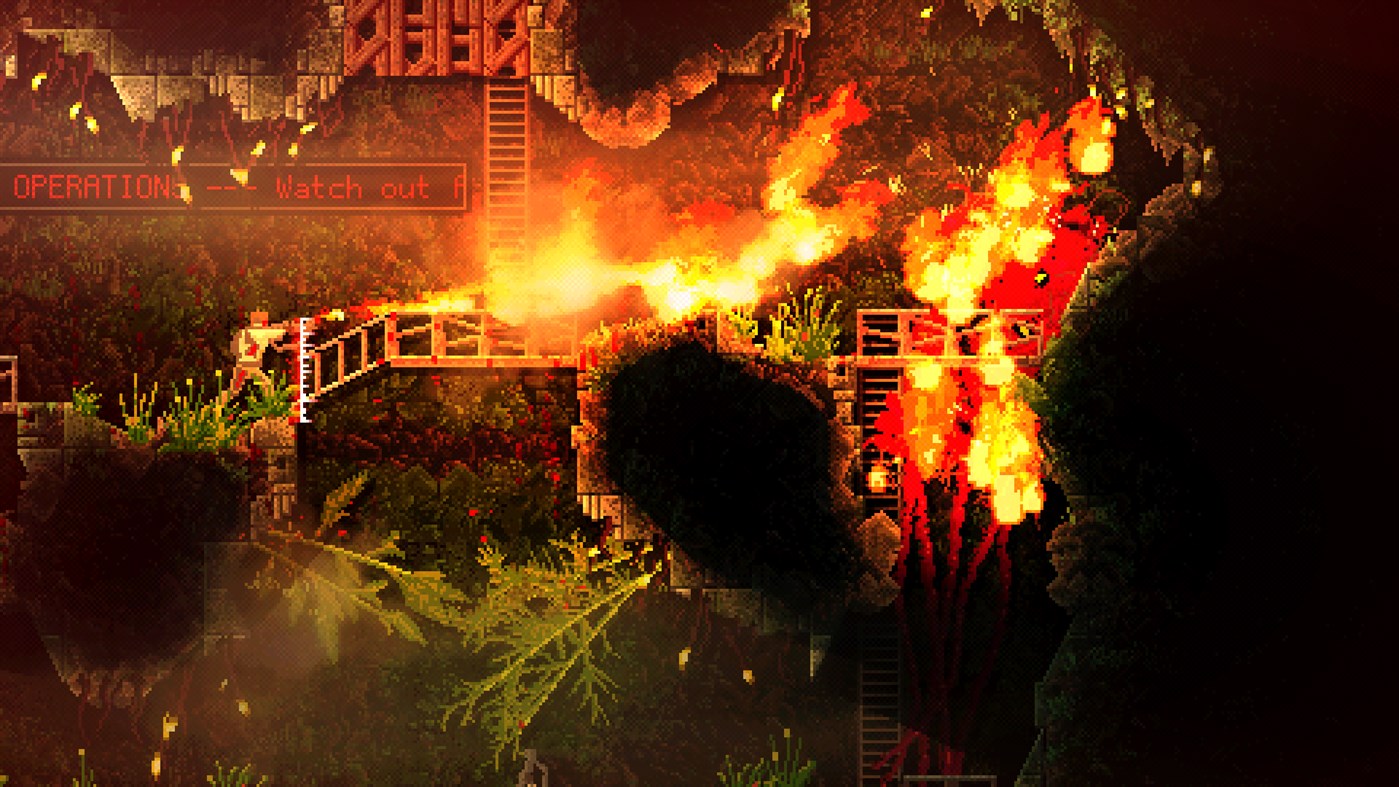 There is a problem, however, which comes in the form of the lack of direction. It’s clear that our creature wants to escape, but aside from that the only story is delivered through brief sections in which we switch control to a human scientist. These sections feel a little jarring after the free flowing movement of the creature, but I guess that’s the point really.

Where this becomes a bigger problem is when the section by section exploration becomes unclear, and we are forced to wander directionless, backtracking through sections we’ve seen several times before. Sometimes I found myself lost for what seemed like an age, and I’d bet that if I played the game through again, I’d do it in about half the time. 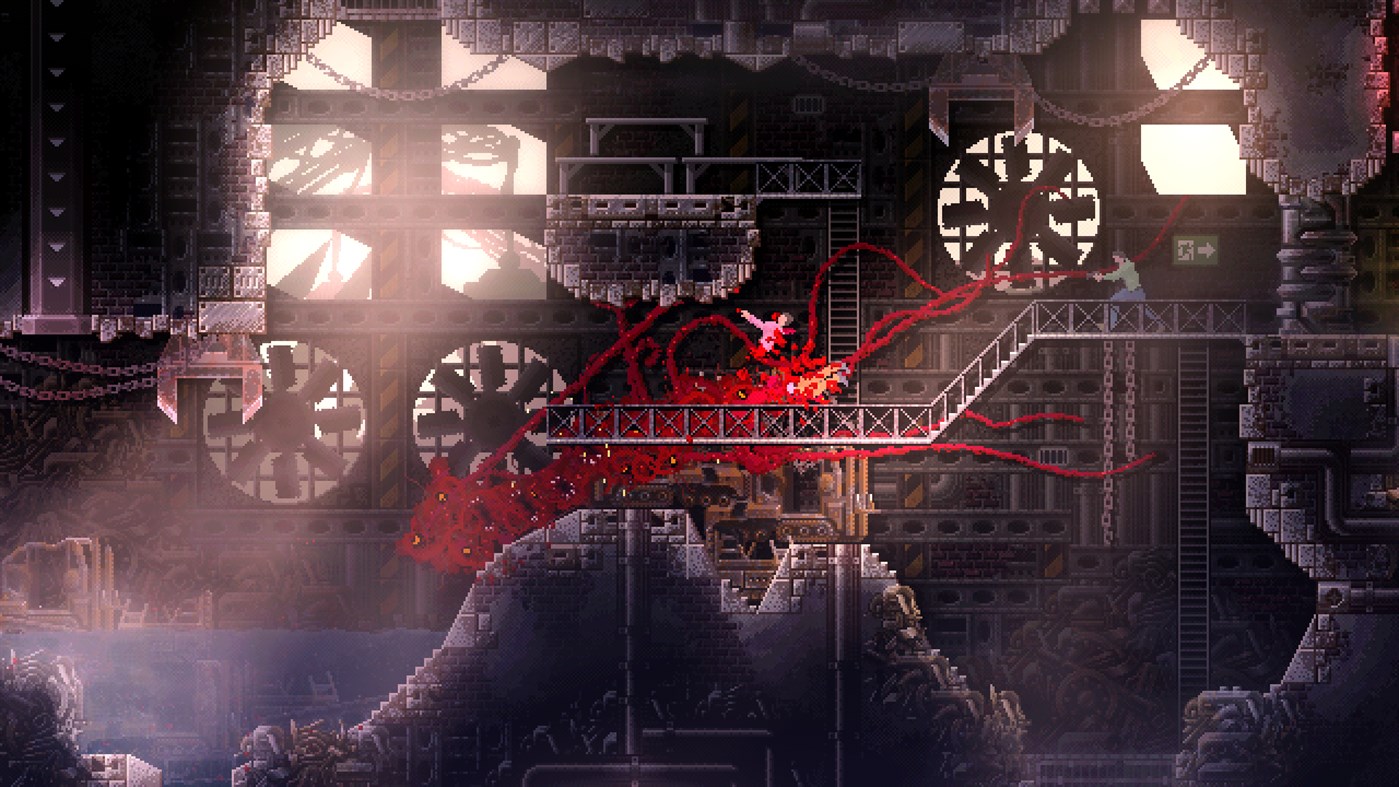 Perhaps one of the key issues with the way in which Carrion delivers its exploration sections is because the abilities that I described earlier (and others) are only available when the creature is either large or small in mass. Opportunities to make these adjustments are quite frequent thanks to regular save points, but it can occasionally result in either more backtracking or more specific annoyances as you work out what ability you actually need (and then go and change size) in order to progress.

Although these sections brought me to the point of considerable frustration, each new area I did reach brought with it an interesting mix of environmental and combat puzzle. Combat can devolve into frantic button mashing when you’re facing “soft” enemies that die to the standard attack, but more often than not, the advanced enemies will need more thought — and the levels provide multiple attack routes and opportunities for stealth. 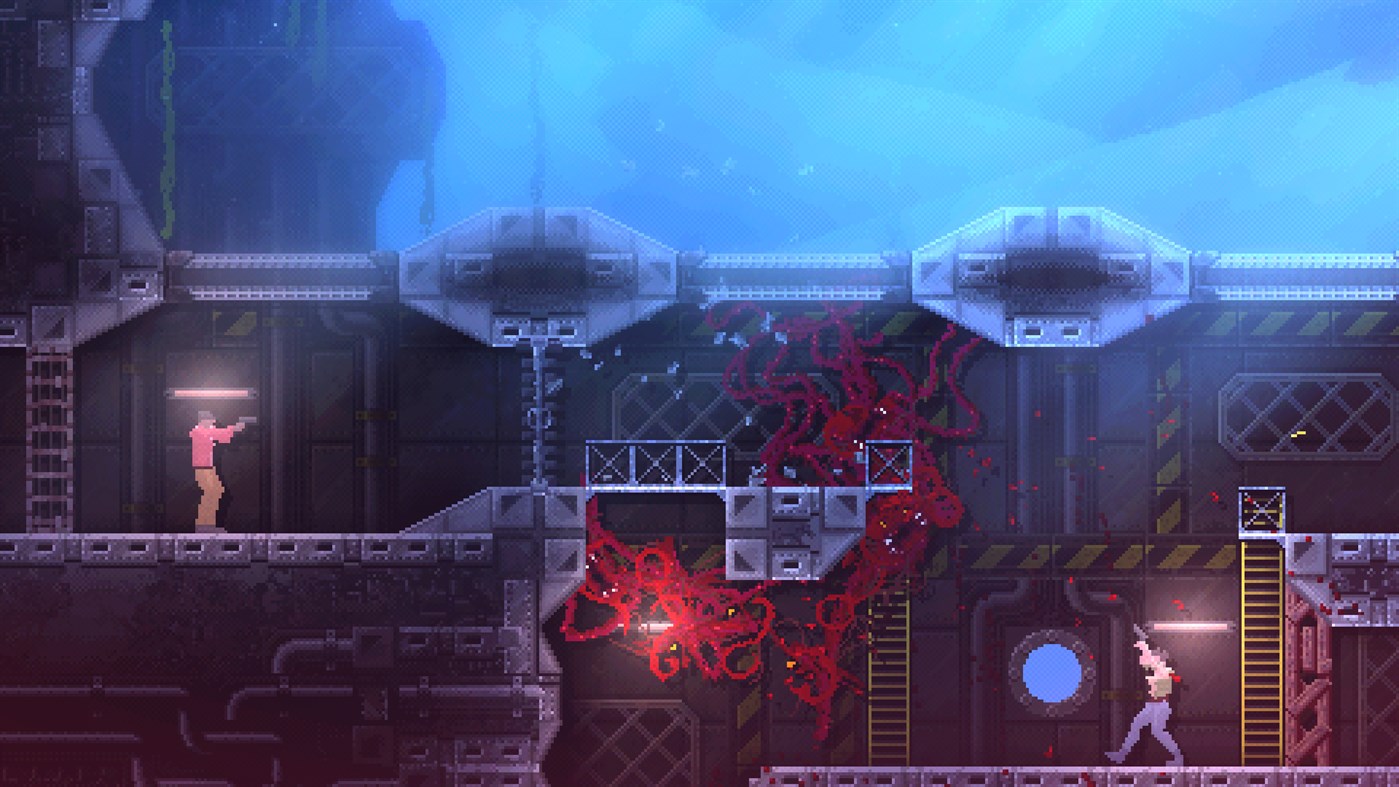 Carrion is a really unusual take on the Metroidvania genre, and I have to admit that I really like what it does well. Despite the lengthy periods of exploration and backtracking that I think could catch anyone off-guard, Carrion is short enough and generally well designed enough to get away with it, and it doesn’t feel as though it outstayed its welcome. This is certainly an unusual game worth savouring, if you can stomach the fairly intense subject matter.

You can find Carrion on PC, Nintendo Switch and Xbox One.