There is little doubt that Agricola designer Uwe Rosenberg is a genius, but based on my experience of Agricola: Family Edition, the children in his life must be nothing short of exceptional either. This euro-style worker placement game aimed at players of eight years old and upwards leaves nothing to chance, and has no random elements, meaning that only a laser-focused strategy will win.

I’ll start with a little qualification — I play games with two children aged four and almost seven, a wife who doesn’t enjoy complex games, and two groups of gamers who really only focus on medium to heavy games. This gives me three distinct views on a game like Agricola: Family Edition, which, as the name suggests, is actually a cut down version of Agricola — one of the most popular euro games ever released. 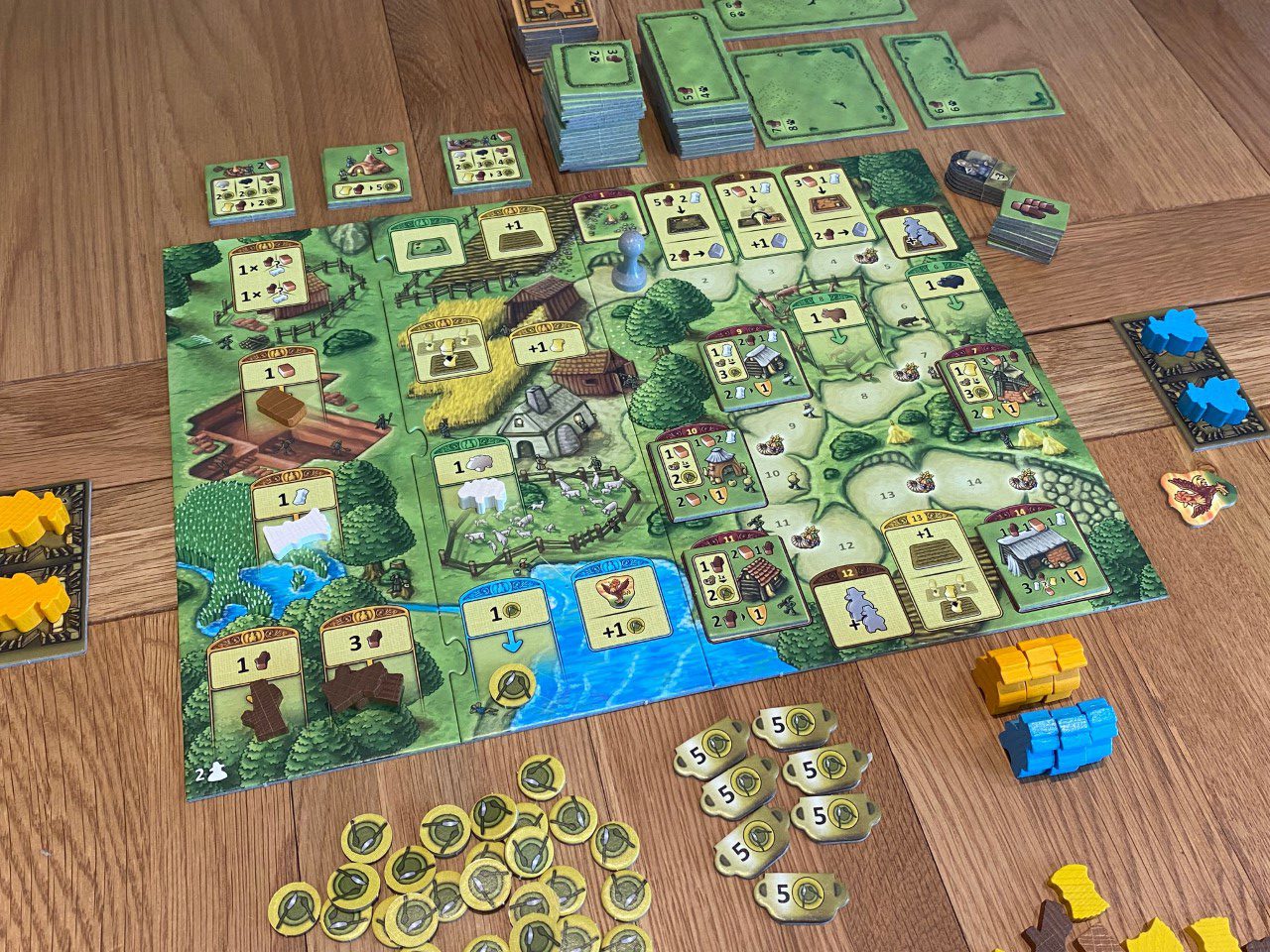 Agricola: Family Edition is a relatively low scoring game, but the ways in which points can be amassed require some lateral thinking across several turns. The theme is farming in the middle ages — players begin with two farmers and a wooden hut, but little else — and the winner is effectively the player who amasses the most points across improvements, livestock and goods, at the end of fourteen rounds. 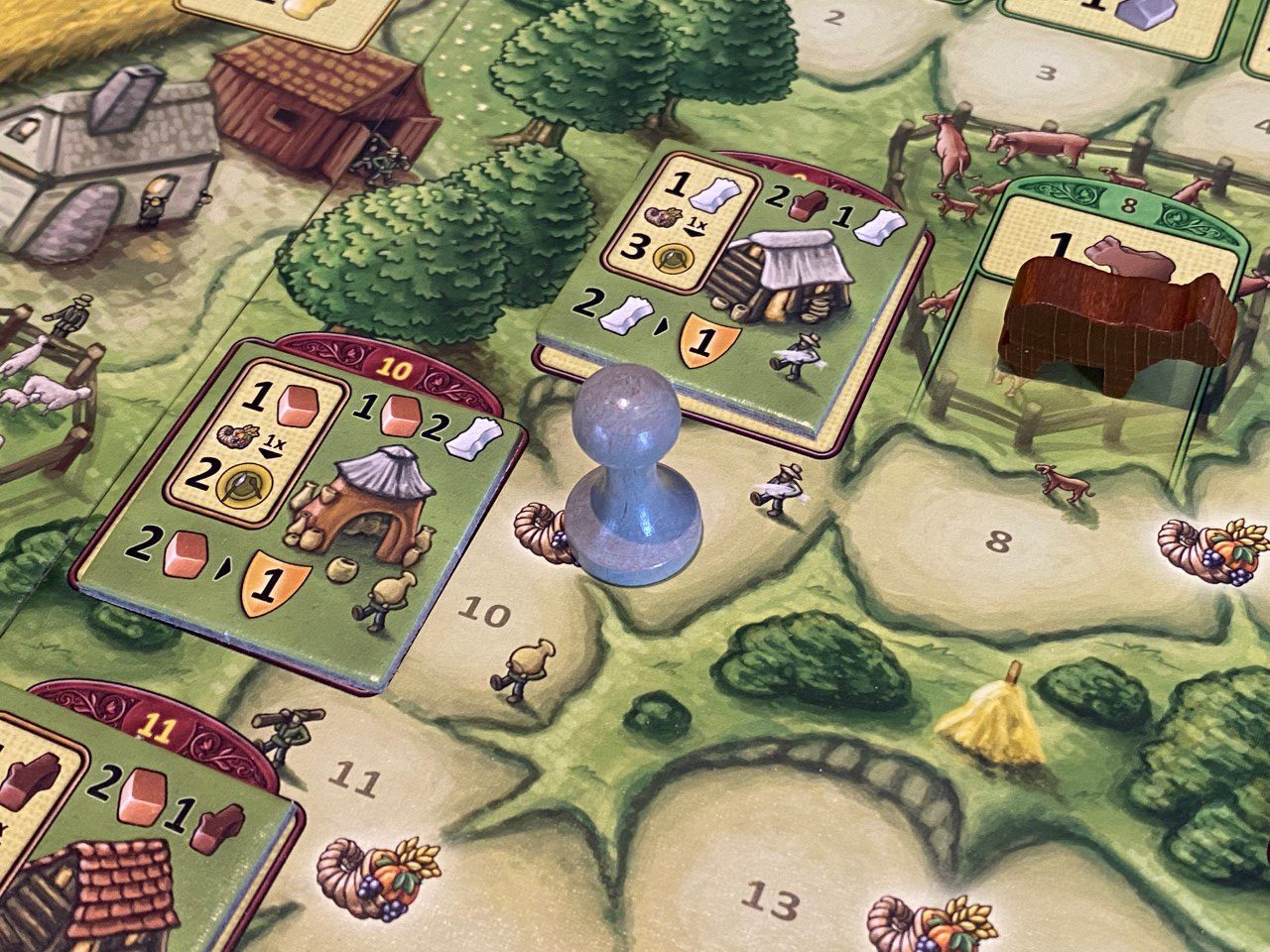 Even though I stand by my statement that the rules and strategies are complex, the gameplay is simple. Players will take turns to put one of their farmers onto the board, taking the action at the chosen space. Each round (after which a harvest may occur) the players will add resources to the board and advance the round pawn one space, opening up another option for the players to place their workers.

Over the course of the game, the spaces include collecting resources or animals, building pastures, house extensions or improvements, harvesting your fields, adding new family members and more. Because placement is literally as simple as putting down a figure and then doing what is shown, getting into Agricola: Family Edition is quite simple. The adults at the table will quickly realise though, that the difference between doing something and doing the right thing, are very different. 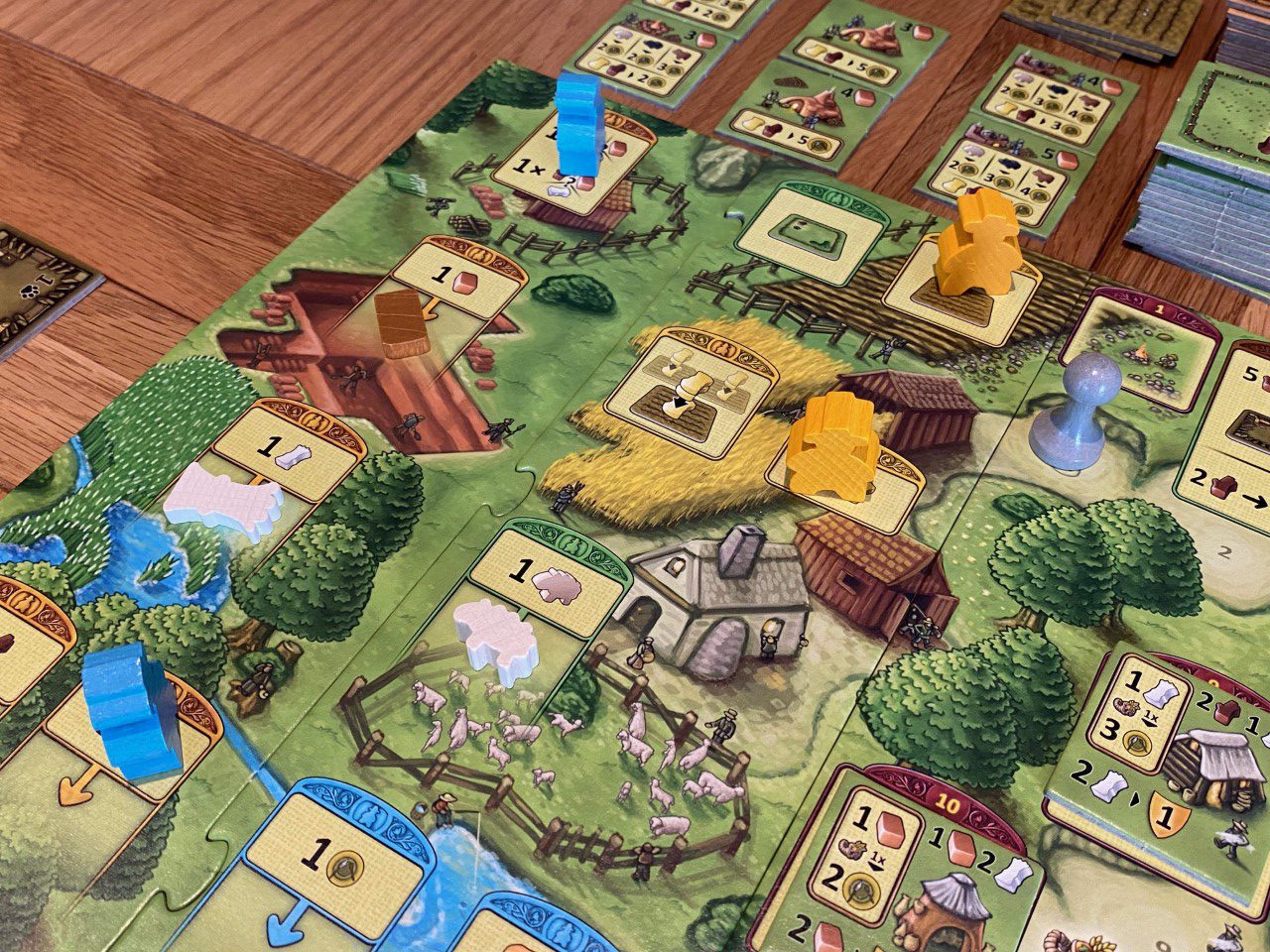 The main early game thrusts include gaining fields to then sow grain in, or following an animal strategy. In either case, come the harvest phases that occur infrequently throughout the game, you’ll gain more wheat and/or animals. When one wheat is down on a field, two more are placed beside it — these can then be lifted off one at a time when the harvest happens. This means that an early sow will pay you back for the next three harvests (with a profit for two of them).

Breeding, on the other hand, allows a player to take one additional animal for each of the three kinds (sheep, boar, cows) of which they have at least two already, but only if they have space in a pasture to hold them. Pastures can only hold animals of the same kind, and whatever number is printed on a pasture dictates the number of animals it can hold. Adding a stable to a pasture will double the amount of animals that can be stored there. 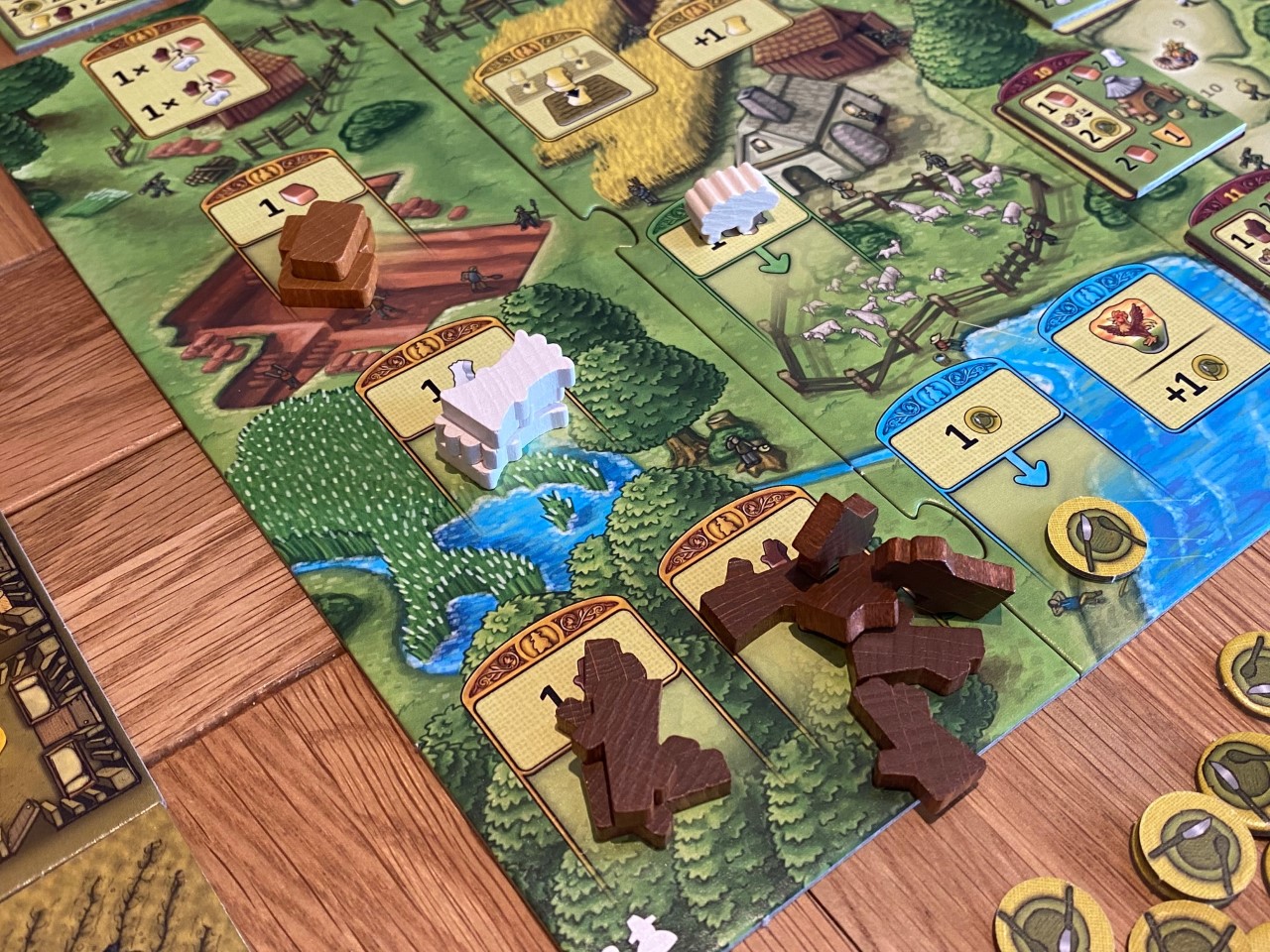 Why is one of these strategies better than the other? Well animals ultimately equate to points, but breeding is somewhat more costly (in terms of actions and setup cost) than agricultural farming. That said, wheat is not worth points, but it can be baked into bread with one of several improvements, and it can be converted into food (called mush) without any other improvement, whilst animals cannot convert to meat without being cooked. Oh, and additionally, whilst not worth points, remaining wheat is Agricola: Family Edition’s tie-breaker, and that does often come up as the deciding factor.

I am kind of hopeful that without being a bore about it, I’ve managed to articulate how much thought has to go into your decisions in Agricola: Family Edition. I didn’t actually mention the wood needed to set up a pasture, the wood and clay needed to build cooking improvements, or the other path you can follow to score points in — by converting your house from wood to clay. It’s also possible to add up to three more family members to your house, but you’ll normally only be able to do this if you expand your house first (there is an exception to this in round 12). 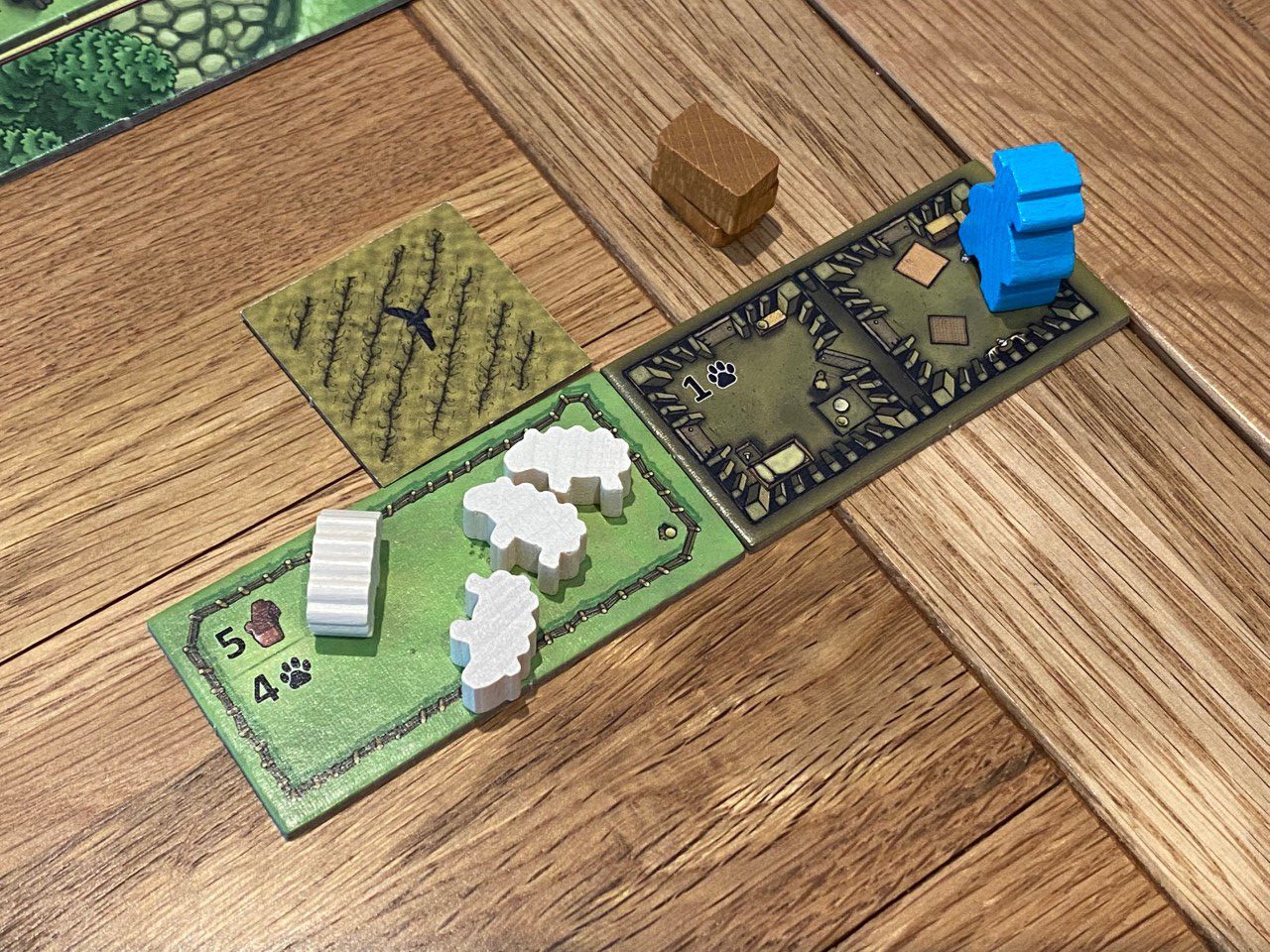 It’s honestly just… a lot for a young player to take in. However, despite everything I’ve said here sounding a little negative, that’s really only when you take it from the perspective of a player who is either too young for it, or at best, borderline. For my wife, or perhaps another player who really doesn’t want the complexity of even more challenging eurogames (like the original Agricola), I think Agricola: Family Edition may be just about perfect.

I guess taking a game like Agricola and refining it down to the core concepts of farming, rearing animals, raising a family and increasing the size and capability of your homestead is quite a challenge. In that regard, Agricola: Family Edition is quite a success — it does exactly that, taking a game that is far too fiddly and opaque for some and boiling it down to a simpler, more refined version. The only issue here is in calling it Agricola: Family Edition, which I think is just slightly misleading (unless your family are in Mensa, obviously). 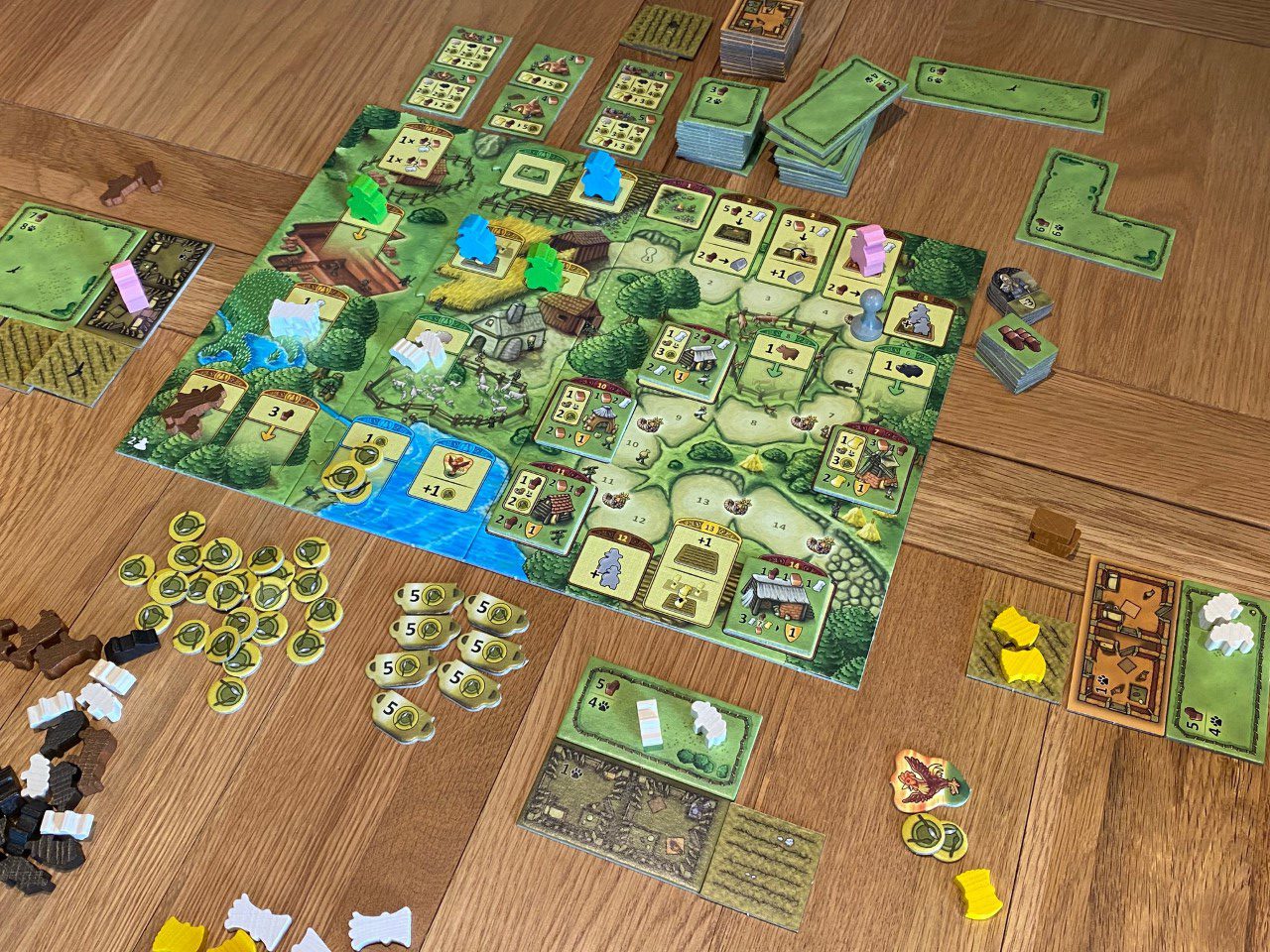 Let me finish off this review by paying Agricola: Family Edition the biggest compliment that I think I can — which is that I think this game is the gateway game for stepping up from a classic light game like Catan or Carcassonne into bigger, heavier eurogames. If you or anyone in your group aspires to be able to play some of the most daunting Rosenberg games — those like A Feast for Odin, Ora Et Labora or the original Agricola – then Agricola: Family Edition is a superb place to start. Personally, it’s a keeper for me, and I’ll be persevering with the kids as we continue our journey into more and more complex games.

You can grab Agricola: Family Edition from Amazon right now.

Agricola (Revised Edition) is Uwe Rosenberg at his best, but is it fun?

Barenpark is cheap, simple and one of the best tile placement games money can buy