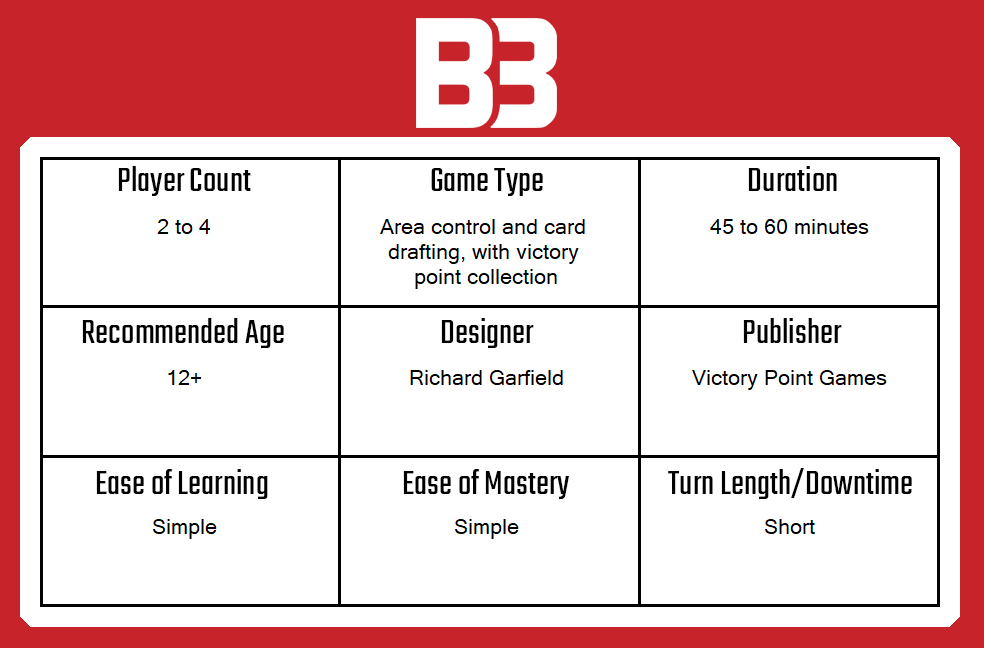 If you’ve ever wondered what it might feel like to rule over a kingdom of cute little rabbits, then you need wonder no more. Essentially a game of area control and card drafting, Bunny Kingdom is a smart, fast-playing and fantastic-looking experience which really excels when playing with groups of mixed age and ability. 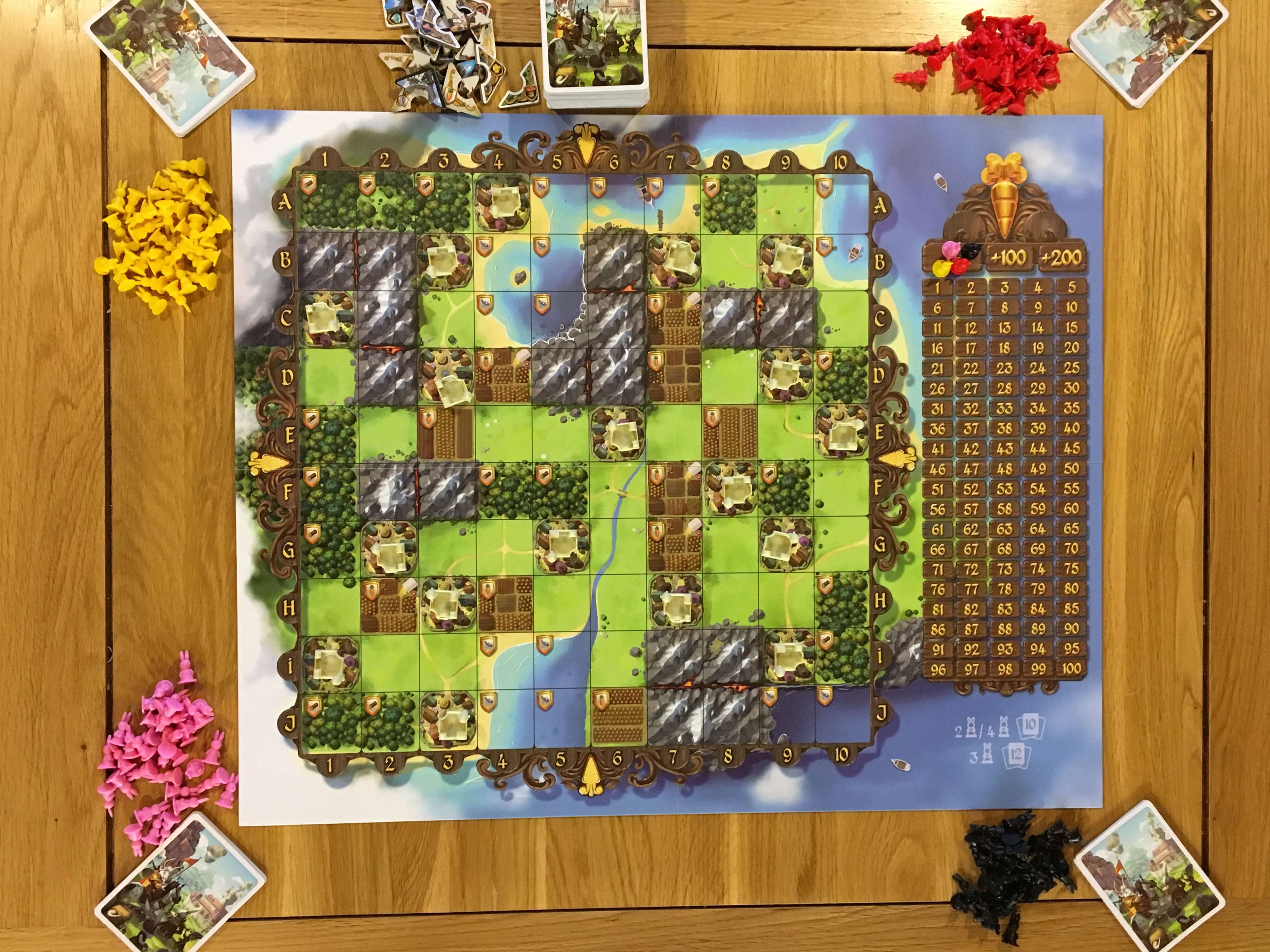 The aim of Bunny Kingdom is to draft exploration cards strategically in such a way that you’re able to link your various warrens together to make fiefs, whilst increasing their value by building cities and resource farms. Some exploration cards let you construct buildings, whilst others simply let you place a bunny on a specifically numbered space on the board. Only one exploration card relates to each space, although fairly rare campsite cards allow temporary control over a space, until its specific card turns up.

Balancing the need to expand each fief with basic exploration cards alongside enhancing the value of existing ones is the main decision-making factor. Whilst other games of this weight often favour a heavily luck-driven approach, Bunny Kingdom uses drafting to facilitate a lot of player choice and control. There are four rounds of drafting in total, each of which begins with the players drawing ten or twelve cards, depending on player count. The players then play these cards in pairs, resolving each pair before drafting again.

At the end of each round of drafting, the players score their warrens based on having control of any combination of linked squares. To be worth anything, a fief must contain one or more cities, farms or other buildings, but don’t fret — the cards to enable these things are fairly frequent. There are cities of three different values (one to three turrets) to build and the game begins with a fair number of them placed on the board by default.

In addition to the fief expansion and building cards, there are also scroll cards, which affect endgame scoring. As an example, they might give you a bonus for each carrot or mushroom farm you control. After the fourth round of scoring (including scroll cards) the player who has the most points in total wins the game. I’ll explain scoring in more detail a little later, but for now let’s dive into the gameplay. 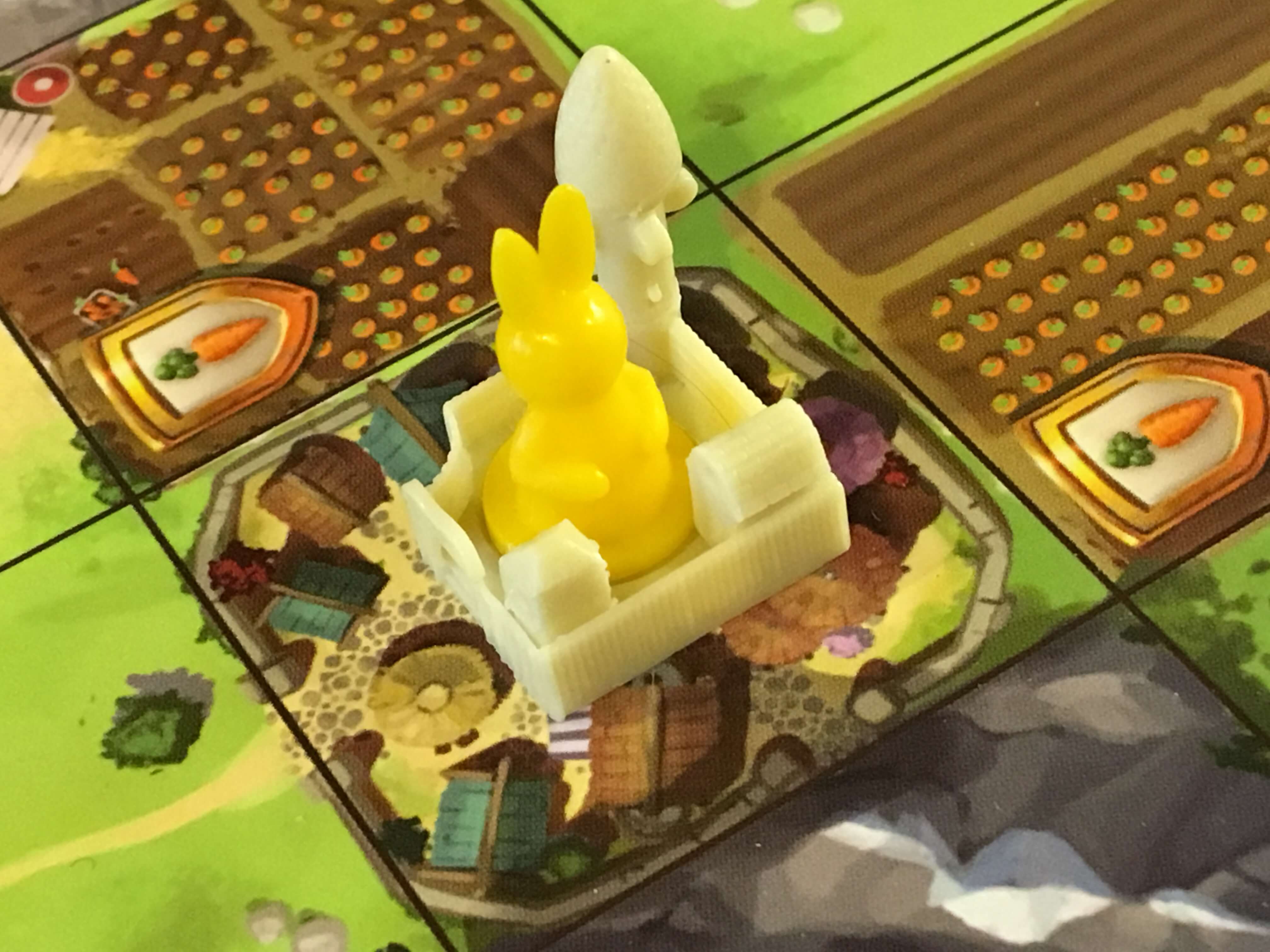 They say a picture is worth a thousand words, and that is certainly sometimes true when it comes to judging component quality in board games. Where Bunny Kingdom is concerned, it’s easy to see that the artwork is lovely, with highly individual characters and bright, bold colors. The bunny and city miniatures are small but well formed and, when added to the beautiful board en-masse, the game has a lot of presence and is very eye-catching.

In gameplay terms, Bunny Kingdom is fairly straightforward, which is mercifully represented in the components as well. The exploration deck may contain several different kinds of card, but it is used in game as a single deck, which is fantastic. Where other designers might have triggered the need for players to drawer from a separate scroll card deck, for example, Richard Garfield has designed Bunny Kingdom so that its draft mechanic is all-encompassing. That means it’s a very simple game to set up and play.

In addition to a lovely board, fantastic artwork on every card and some excellent miniatures, Bunny Kingdom uses a few tokens to represent the development of spaces on the board. These are nicely made and slot around bunnies on the same space, but they are very small and can be hard to see on crowded boards.

The final component is the manual, which is very well laid out and easy to learn from, with many practical examples to aid play. There are a couple of drafting variants and nuances for player count, but most are easily accommodated and clearly explained. 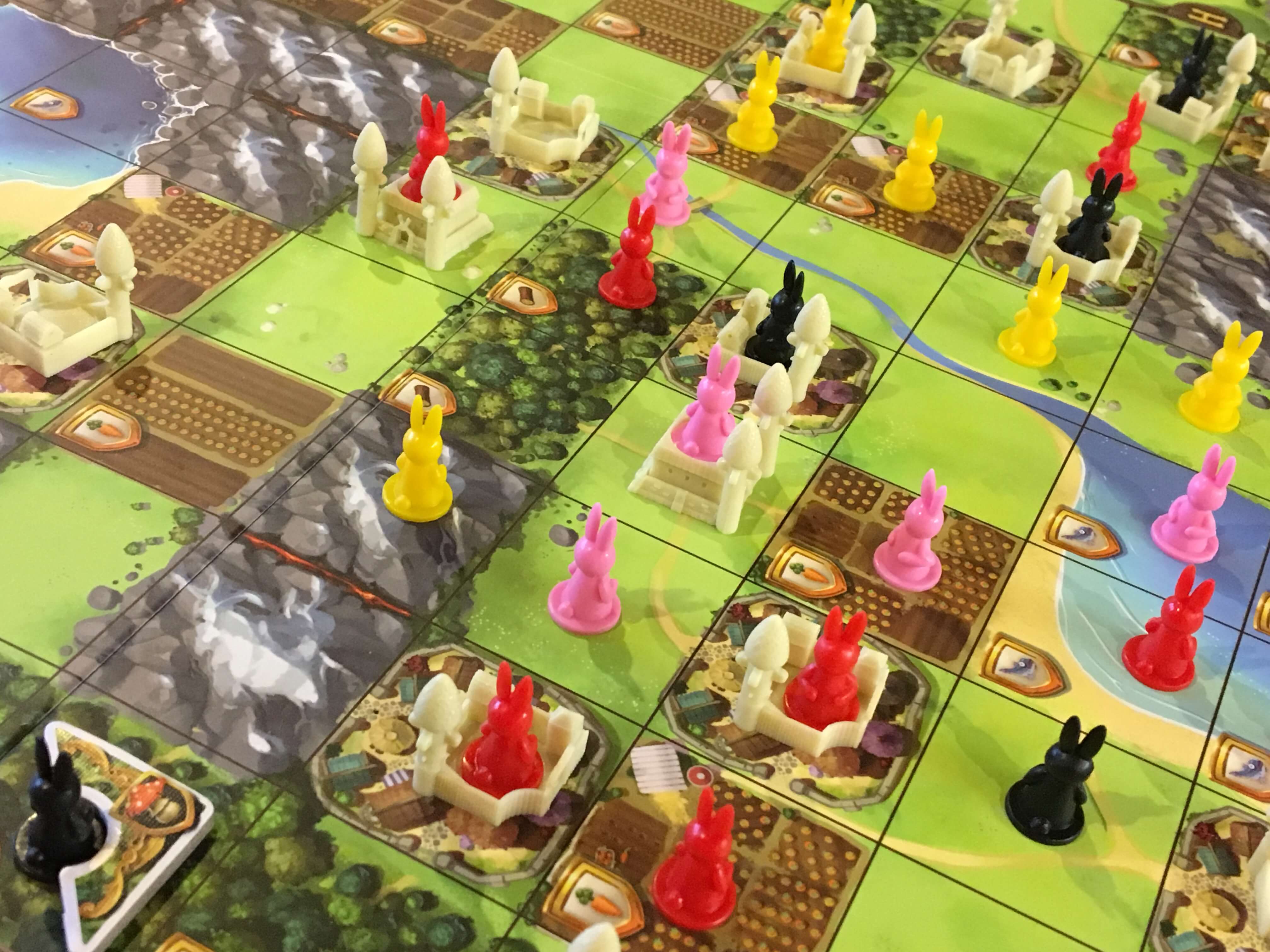 I’ve already mentioned that Bunny Kingdom is split into four rounds of drafting, but each round has several phases of its own. Firstly, the players are each dealt ten cards (or twelve when only two players are involved). Each player choose two cards, with the remaining eight placed in front of their neighbor in a face-down stack.

The players now simultaneously resolve the two cards they chose, depending on what they are. For most cards, they place a bunny figure onto the board in the space shown (for example, D8) in accordance with the clearly marked grid. For building cards, they place the card face up in front of them with the relevant building on it. Scroll cards remain face down, whilst other, less frequent cards each have their own way of being deployed.

Once the first two cards are played, the next two are drafted and the process continues until no more cards remain (or until two do in the two-player mode, at which point they are secretly discarded). Once all this is done, buildings sitting on cards in front of the players can be freely placed onto areas they control, in line with occasional rules on legal placement. With the exception of a few other minor rules, scoring take place after this.

Each connected series of spaces creates a fief, which may then be scored based on a multiplication of its power and size. Power comes from the number of city turrets, whilst size is the total number of connected spaces. It is therefore advantageous to have large fiefs that ultimately have lots of cities in them. Carrot farms and other buildings confer bonus points, with the whole lot added together and tracked on a scoring board shared by all players. 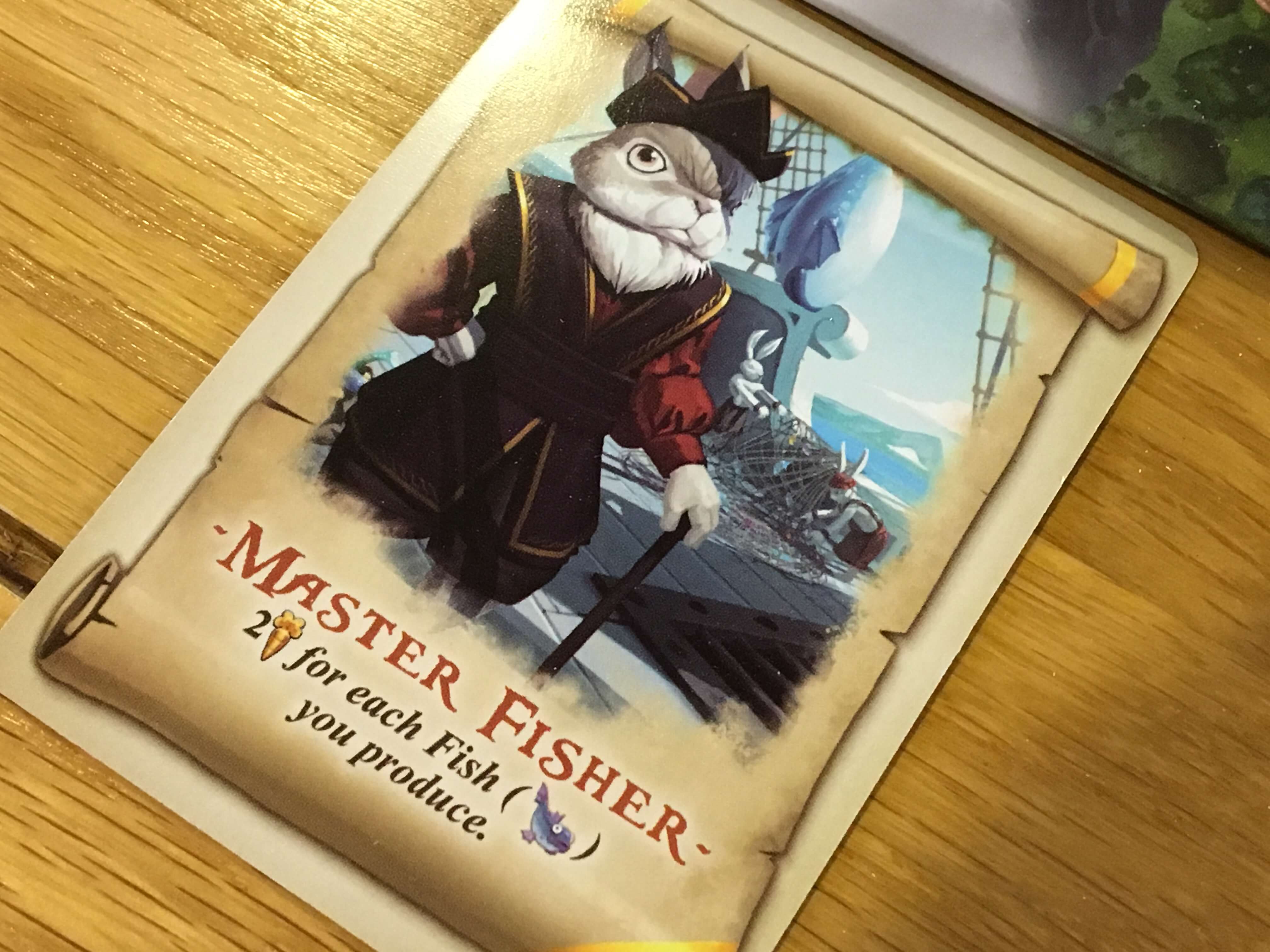 Aside from the excellent components and the really, really pretty artwork, the first thing you’ll probably notice about Bunny Kingdom is how straightforward it is to pick up and play. If indeed there was ever a need for a gateway drafting and area control game, this might possibly be it. It’s fairly light in weight as a result and there isn’t a lot of direct player interaction, but that sits well with me given the mixed audience it will likely attract.

My children are still too young to enjoy it, but I do think that the sweet spot for Bunny Kingdom is likely to be when played with game-orientated parents alongside children of between about eight and thirteen or fourteen years of age. This age range can extend upwards indefinitely as long as the audience of players enjoys relatively casual games — believe it or not, the theme isn’t as saccharine sweet as it sounds, so it doesn’t really detract in any way.

Bunny Kingdom is an incredibly simple game to teach and if you imagine it as a much lighter version of something like Blood Rage (thanks to both drafting and area control being present), you wouldn’t be far wrong. That said, it’s not really a fair comparison on either game, because I don’t think Bunny Kingdom ever set out to be complex or strategically broad. Instead, it uses fast gameplay that supports lots of small decisions to create an exciting experience that players will want to repeat several times in one sitting, where time allows. 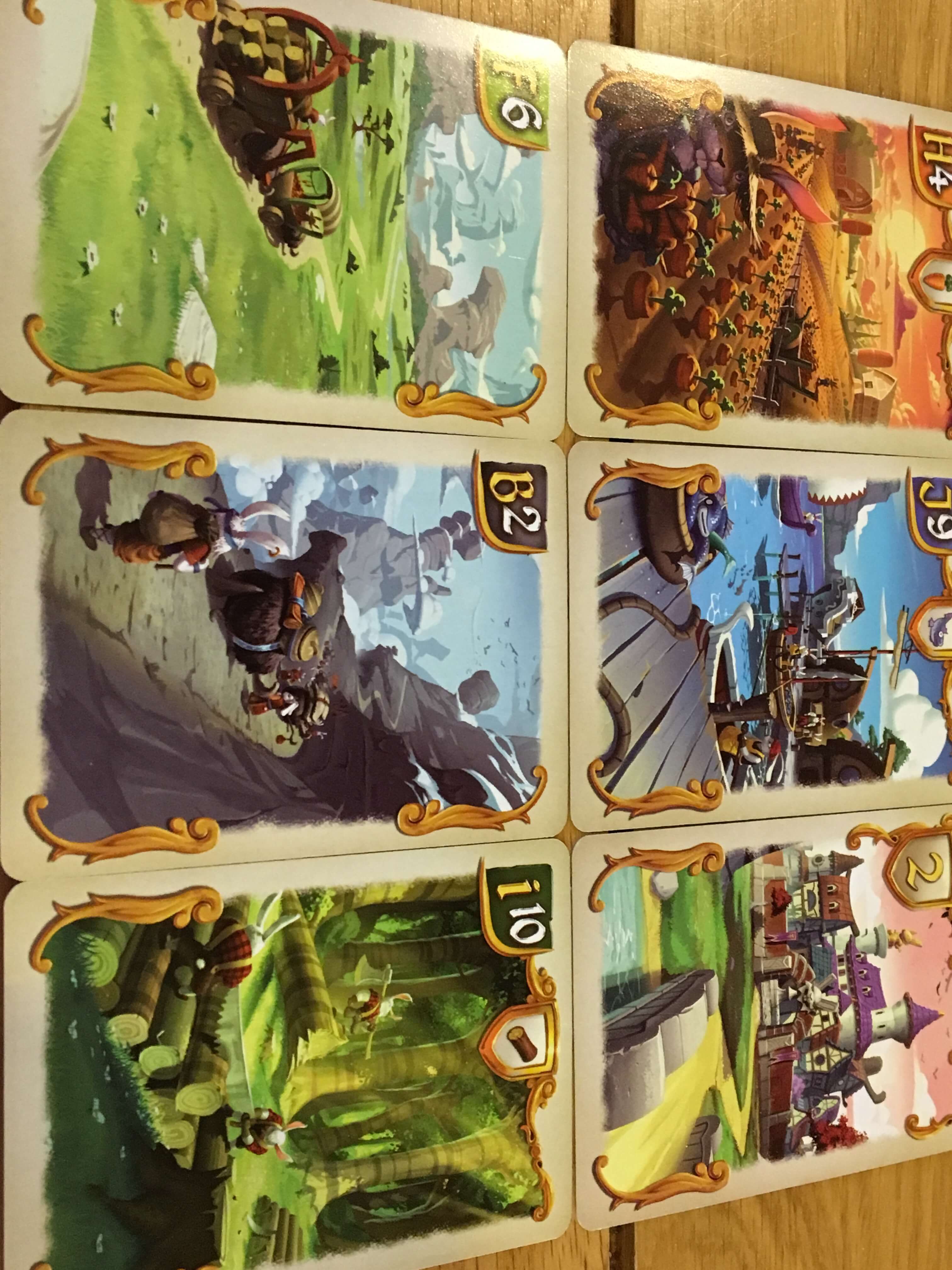 If you’re a family of gamers looking for something new that will appeal to both school-age to teenage children and adults (as well as the odd grandparent), you can’t go far wrong here. On the other hand, if you’re a hardcore gamer looking for deep strategy and chunky decisions, you might want to skip it — although that doesn’t mean it’s any worse for it.

Personally, I like the accessibility and lack of complexity, especially when contrasted with the amount of control the players have over their destiny, which isn’t usually a feature of games at this weight. A very solid recommendation from me and certainly a strong alternative to the ‘duller’ traditional gateway games.

A copy of Bunny Kingdom was provided for review purposes. You can find out more about Bunny Kingdom on the website of publisher IELLO Games.