While I’d been able to see the game played previously — at Gamescom, from which you can read my impressions here — the build which was on show at the event was playable, a first for the game, and notably quite late in the game’s development for a showcase. As we all know, watching a game being played can be very different to experiencing it yourself, so I found it important to make my way over there and see exactly how different. 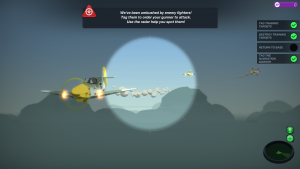 My main takeaway, which became especially apparent as we closed in on the bombing target in the demo, was that the game was actually a lot more complex than I had initially perceived. Back during that original presentation the developer had managed to make the moving around of the team, and prioritising issues, look extremely easy. There had been talk of needing to revive people, and of having to remove people from their stations in order to keep the plane in one piece, but they had done a very adept job of every part of the mission except for actually keeping the plane aloft — they were a little bit too late to fix up some issues left over from a run-in with an enemy ace, with their bomber smashing into the ground a little South of the landing strip. When it came to my playthrough, which was on exactly the same mission, everything was a lot more hectic — although I did somehow manage to get my entire crew home safely.

The mission was simple: fly over a target and snap a photo, then head on to the next target and empty the bomb racks over it before heading home. As with the demonstration, enemies peeled out of the clouds as I approached each target and the pressure didn’t let off until I was most of the way back across The Channel. A frantic rush filled the inside of the bomber, as I had —at one point— two of my people using medical kits to revive downed individuals: no guns fired, the navigation panel stood empty, bars emptied. At one point I even almost broke one of the unwritten rules of aviation, nearly leaving the pilot seat empty to try and get more hands to where I needed them.

Which ties in nicely to the game’s latest trailer, below:

There were various reasons behind my narrow escape from death, and lots of things presented themselves to me as potential excuses for my folly: characters amble along at a leisurely pace; there are dozens of UI elements to interact with; and interactive objects in the body of the plane were not introduced. I felt deep-ended, suffering from information overload. That said, by the time I successfully landed I felt a lot more confident about all of it. 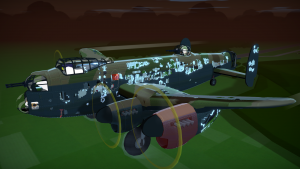 After my successful landing I managed to have a conversation with Dave Miller, one of the game’s creators and the same developer who had introduced me to the game earlier in the year. We discussed my experiences with the game, and he explained that the demo mission was actually plucked from several missions into the campaign — something not mentioned on the stand. In fact, players in the main game will start off with less than the full ‘seven’ crew members, and start by running vastly simpler missions. This is much better at easing people into the controls and abilities of each of the various roles, however would make for a much duller experience to visitors at the show.

When I returned to the game for a second rally I had a lot more success, dipping in and out of higher altitudes as I approached the targets so as to minimise the effect of the fighter-harassers who had shot my plane full of holes in that first outing. Successful deploying of the navigator’s ‘auto-tagging’ ability also took some pressure off when done correctly. All-in-all it went swimmingly, especially compared to that first run.

There’s still a lot to be seen of the game; I’m desperate to find out about mission variety, the various abilities for the characters, as well as the extent of the customisation pre-flight. That said, part of the joy of the games Bomber Crew is most compared to comes not from the order of scale of the scenarios but from the personalities we attach to the characters along the way.

Bomber Crew launches on PC later this week; the team are working on console versions for the Xbox One, PS4 & Nintendo Switch.