Blasting to the Depths in Caveblazers

Caveblazers appeared on Steam Greenlight back in February amid a flux of promising titles, its byline? Pseudo-multiplayer platformer roguelike.  After passing through the process later the same month it went on to launch into early access two months later. A short while back the developer, Rupeck Games, announced that the game had hit it’s beta state, fully playable but not fully feature complete. 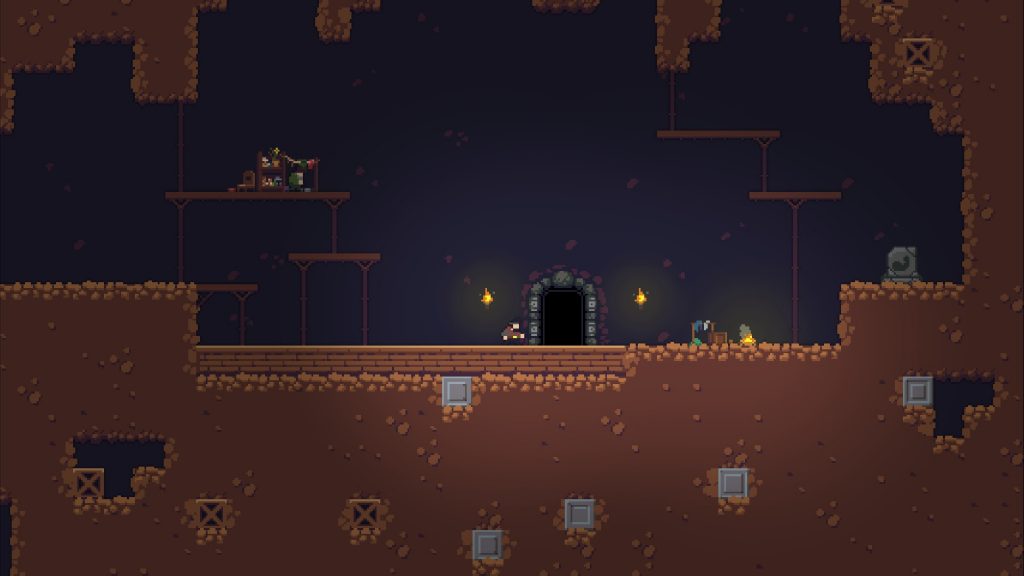 A bit of history.

Back on my old website I covered Caveblazers as it passed through the greenlight process – the things that stood out most to me were the fast, Broforce/Super House of Dead Ninjas style platforming, as well as the RPG stats, and inventory system. The inventory was vast, and it stuck out as a massive contradiction to the UI of a fast-paced platformer, especially one where NPCs were designed to act in a fashion similar to Dark Souls’ phantoms, yet more ambiguous. How can you manage a 30 slot inventory when the chap you’re standing next to might turn his blade on you?

My old article impressed at least one person, as it turned out, as my brother bought the game. Most early access titles don’t allow for Steam Family Sharing, but Rupeck Games had clearly ticked a box, and as such I booted the game up on April 1st in order to see what the game was like when I had a spare moment. Later that day I uninstalled the game intending to return to it later, I hadn’t been particularly taken aback by it, and it was a busy time for the website I was writing for. The game in that earliest state was barely a shell of the game that I had been expecting, and I didn’t give it much time at all, but, as with all E.A. games, you need to give them some time to settle in. 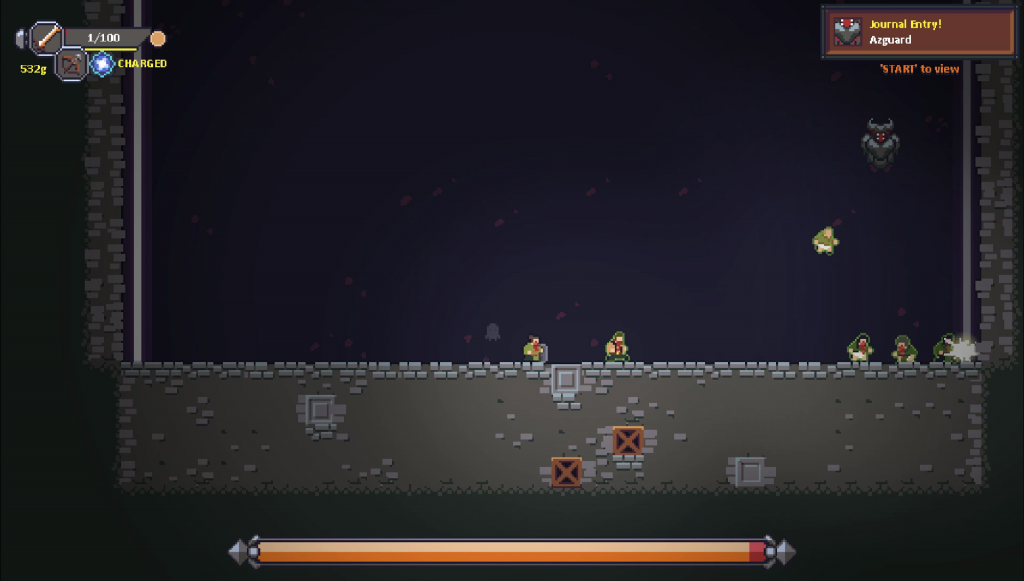 The next time I returned to the game, in mid-August, the game was already very different. The ‘pseudo-multiplayer’ had been toned down with naturally passive NPCs which couldn’t be injured through friendly-fire added, and ‘trolls’, added in place of the former allegiance-swapping characters. I managed to reach my first boss also, a giant spider that I could abuse if I climbed the wall, although I died shortly afterwards. Finally, the inventory was improved, with more items added into the game, and the game seemed to more willingly drop in my favour – although this was obviously psychological.

My most recent return to the game was as a result of the game moving to beta. The news broke late last week, and while we only wrote about it in the most fleeting manner, it was clear that the game had received some major upgrades for it to have hit the big milestone. As it turns out, it had indeed. The rest of the article refers to the game in its 1.2 status. 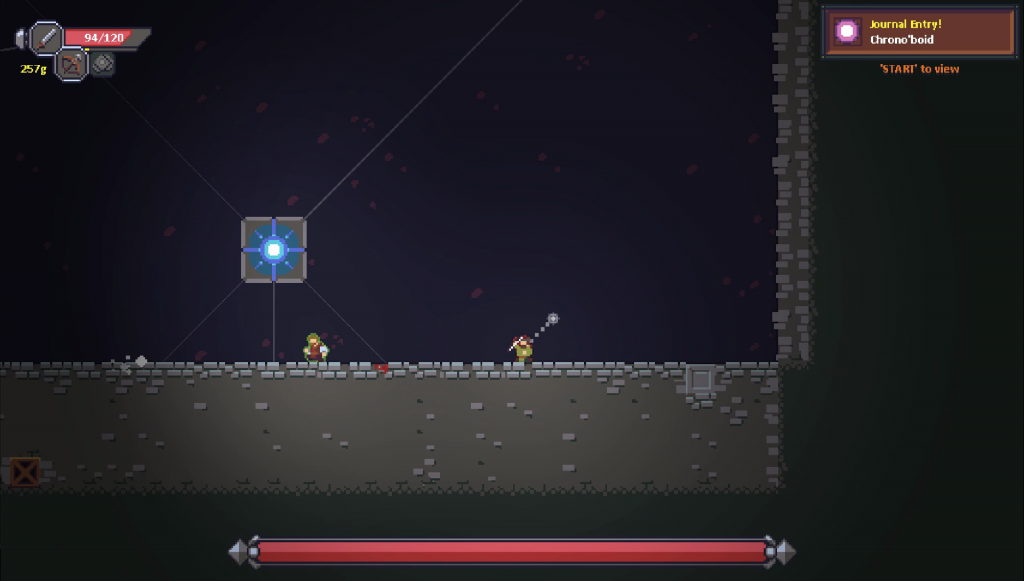 A lot has changed about Caveblazers since it’s inception, its latest update has added in new bosses, new customisation options for the character, shrines which require donations (of blood or gold) but give blessings, and a new way of receiving blessings wherein you get to choose between three in which you take.

Players start out in a small, nearly-empty cave, no doubt seeking treasure or off in pursuit of a captured loved one. An old man rattles off warnings about delving deep, and also to stay away from his stuff; there’s also a shrine for picking which perk you’ll start with, a place to change your appearance, and some skeletal ruins hidden in a lofty crawlspace. There’s enough room and platforms there to familiarise yourself with the controls, the jump patterns, and the wall-jump system. This is very handy, because outside of the bosses there’s no bespoke levels after that – everything is procedural.

Two levels and a boss is the formula that you follow until the very end of the game, however that end is far out from standard grasp as Caveblazers subscribes to a lot of the standards set out by Rogue, namely it’s difficulty, procedural generation, unidentified potions, and character permadeath.

While permadeath can be a major negative for a lot of people – Looking at achievements for CKII (wherein they are locked behind an ‘Ironman’ mode, less than 1/8th of the player-base has a single one. Similarly, less than 1/20th of PC owners of Fallout: New Vegas have finished the game in ‘Hardcore’ mode – it is required and appropriate in Caveblazers thanks to its buff and boon systems, as well as the generous distribution of items (hark back to that 25 slot backpack earlier). It’s not unusual to come up against the first boss with all equipment slots full, and about four or five buffs running on yourself; things ranging from a blessing of sorcery which gives you plus five attack power to your magic, to ones that give you a chance to set your blade aflame, or launch projectiles if your health is over 90% of the max (the ‘Master Sword Blessing). There’s no such thing as a fully powered up player however, and until you’ve got the boss behaviours down you’ll be minced into pulp regardless of how hardy you feel. 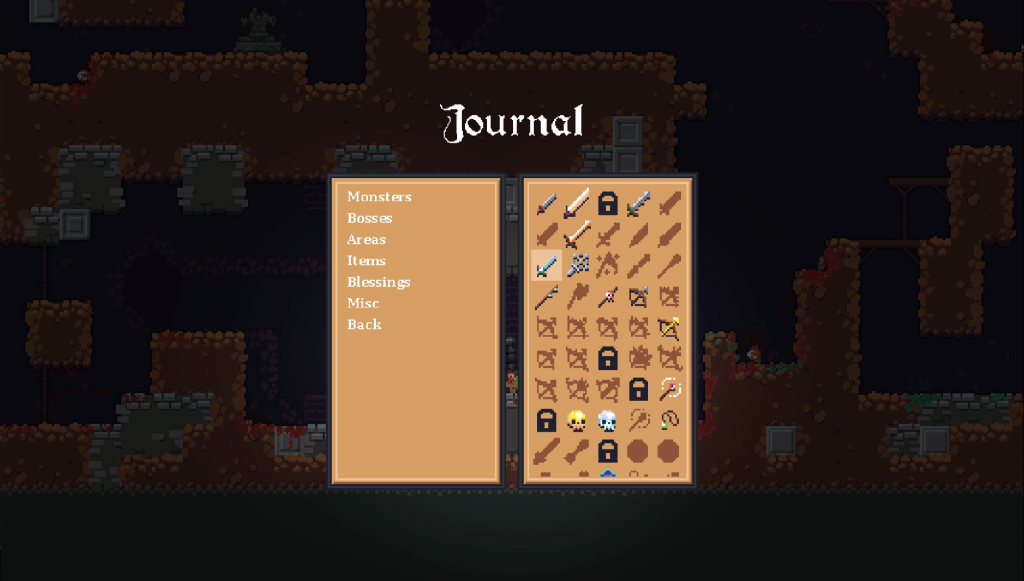 Equipment, namely spells, weapons (you always have a melee and ranged one) and jewellery come in as diverse a mix as those boons I mentioned, and of all of the items in the game there’s only a couple that could be deemed negative versus the starting equipment. Even those, when combined with certain boons could effectively be used in more effective ways than the starting blade – and I’ve no doubt that a skilled player could clear most of the game with only the starting equipment and no buffs anyway. The game feels, on an equipment and buff level, heavily weighted towards the player.

There’s also no time limits, so players can clear each level fully before moving on through the game.

There’s a few comparisons bandying around for Caveblazers, most pertaining to the visual style of the game. Samurai Gunn, as well as Broforce, and Vagant. There is one comparison that is mentioned more than any of those, and definitely doesn’t relate to the visuals. Spelunky. Both games are perpetual downward delves, items are overpowered, and yet the average player doesn’t survive for long. Both have procedural levels, items have intrinsic values (Caveblazers will include storefronts), and yet they manage to make the player feel like it was them who made the mistake.

The things that separate the two games are the very things which make Caveblazers re-playable. The most prominent of these are the absence of a time limit, the wider view of the level due to smaller characters, the NPCs, the Bosses, and the game’s inventory system.

By removing the time limit, the game gives players the chance to fully loot the level before moving on, as I said the game’s drops are generous and the boons are plentiful. If you can withstand the slow drip-dropping of enemy trolls, and kill off everything that gets in your way as you explore the level, then there’s plenty of rewards to be hand. This means that a level can take anywhere from 40 seconds to five minutes with varying success. 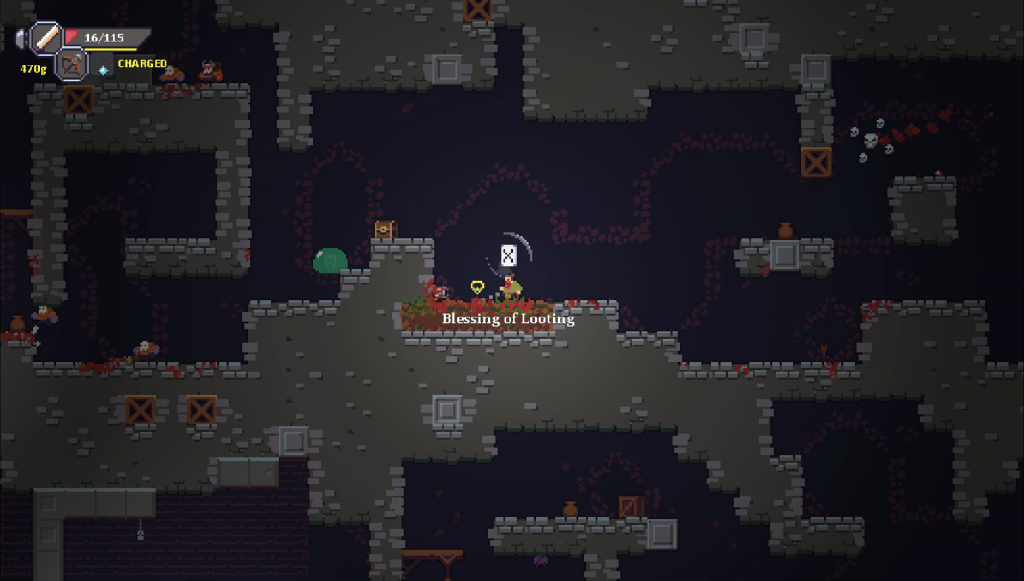 I mentioned drip-dropping trolls from the top of the level, these NPCs are tougher than most of the enemies littered through the levels due to the fact that they run on the smarter AI from the originally intended ‘phantom-like’ humans. This means that they’ll snatch items from the ground, bounce off of walls, and snipe you with their spears.  There’s also humans who drop in, naturally neutral but working towards the same purpose as you; if you hang around near them or help them out then they’ll become friendly and start following you around. The only real negative to this is that their collected pick-ups can not be reclaimed until after they’ve fallen in battle.

That death though, normally comes from spike traps or the inevitable bosses.

Each third level is a tall chamber, down at ground level there’s a large object or beast; sleeping or bound. The bosses are hard, especially the first time you come up against them. Some spew poison, some fire lasers, some have hands that smash, charge and crush. There’s no way of knowing which boss you’ll come up against, so if you’ve got yourself maxed out for melee damage and the floating eye crops up, you’d better hope you have the timing to wall-climb and ride it’s fists up to eye-level to bring it down.

Wall climbing is absolutely integral to both navigating the game and challenging the bosses, it’s something that the AI NPCs can’t make use of as well as you however, especially not at the moment, and so you’ll rarely take one of your allies through a battle all the way. Their loot litters the floor with the rewards from beating the bosses.

Rupeck Games have got a fair few things planned for the game before it hits full release, and have been actively taking advice and ideas from the community to further its development. There’s no word on a predicted full release date, but the game is fully playable at the moment, and I highly recommend it.