Betrayal at Baldur’s Gate is an absolutely unashamed reskin of Betrayal at House on the Hill, offering simple, chaotic and often broken (but always fun) action and intrigue for between three and six players. Set (unsurprisingly) in the titular city of Baldur’s Gate, this edition of Betrayal brings fifty new Haunts, twelve characters (based on traditional D&D classes and represented by six pre-painted miniatures) and a whole host of thematic monster tokens, item cards and so on. Everyone loves a light-hearted party game about backstabbing friends and pretending to be a flesh-eating worm in human form, but how well does the core gameplay of Betrayal work against the backdrop of one of the most iconic settings in gaming history? Let’s find out.

Betrayal at House on the Hill is certainly among the most famous (if not the most famous) of all of the classic “traitor within” games and despite a high chance of the systems suffering from weird bugs (and sometimes outright breakages), that reputation is well earned. You see, people (myself included) are willing to accept these quirks because once you play Betrayal, you get a real sense of just how ambitious its goal is, and it’s impossible not to be impressed. In the case of Betrayal at Baldur’s Gate, this is a game which features a completely modular board made up of interlinking indoor, outdoor and underground locations and two very distinct phases of play which will be different each and every time you play. It plays a bit like a roguelike video game, except — and this is important — the original Betrayal was released in 2004, which makes its systems really, really old, yet they still hold up today!

The phases of play in Betrayal at Baldur’s Gate take place either side of a randomly triggered event known as The Haunt, with the turns building up to it representing the exploration and preparation phase and those after it usually involving a climactic showdown between loyal adventurers and some kind of dire force of evil. Much like the randomly generated board, you never know which Haunt will be triggered, who the traitor will be (if indeed there is one) and what you’ll have to do to stop them. The fact that there are fifty haunts? Brilliant. This is a game you can play over and over again.

Betrayal is also a beautifully simple game, so with minimal fuss and a “jump straight in” kind of approach, you can have anyone up to speed on how to play and what to do. By way of a simple explanation, each player chooses one of the six (reasonably well) painted miniatures and a character card (of which there are also six, but each has a different character on each side) and sets a number of attribute sliders based on a clearly indicated starting value. Attributes include might, speed, sanity and knowledge, each of which is used to overcome various challenges that will randomly occur throughout the game. 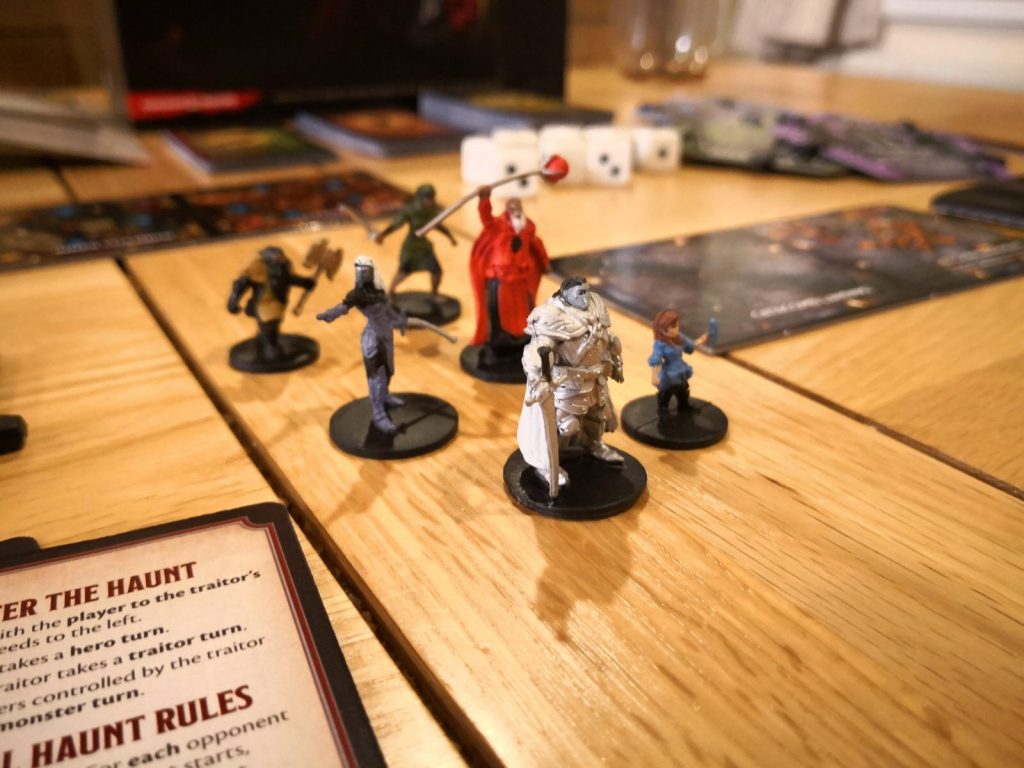 With these values set, the first player (ingeniously determined by the player aid cards) moves a number of tiles based on their speed stat until an effect forces them to draw a card (which they must then resolve). Usually, cards are drawn as the result of a player leaving the tile that they are on via a previously unopened door, which results in the placement of a new, randomly drawn tile from the appropriate stack. Every tile has either a symbol (denoting which card must be drawn) or some special text that offers either a benefit or a penalty for players resting on or passing through that space.

Drawing cards is really where the most impactful part of Betrayal takes place, at least prior to The Haunt. Most cards offer a benefit to the player who draws them, even though there is often a catch to them, such as the need to roll for a test against one of the statistics on your character card. The decks of cards you must draw from are self explanatory and, usually, quite thematic based on the name of the tile and its artwork. For example if you turn over a warehouse, you’ll likely find an item card. If you happen upon a cursed alleyway, you’ll probably be drawing from the omen deck. In between those two in terms of risk and reward are event cards, which tend to be the most common. 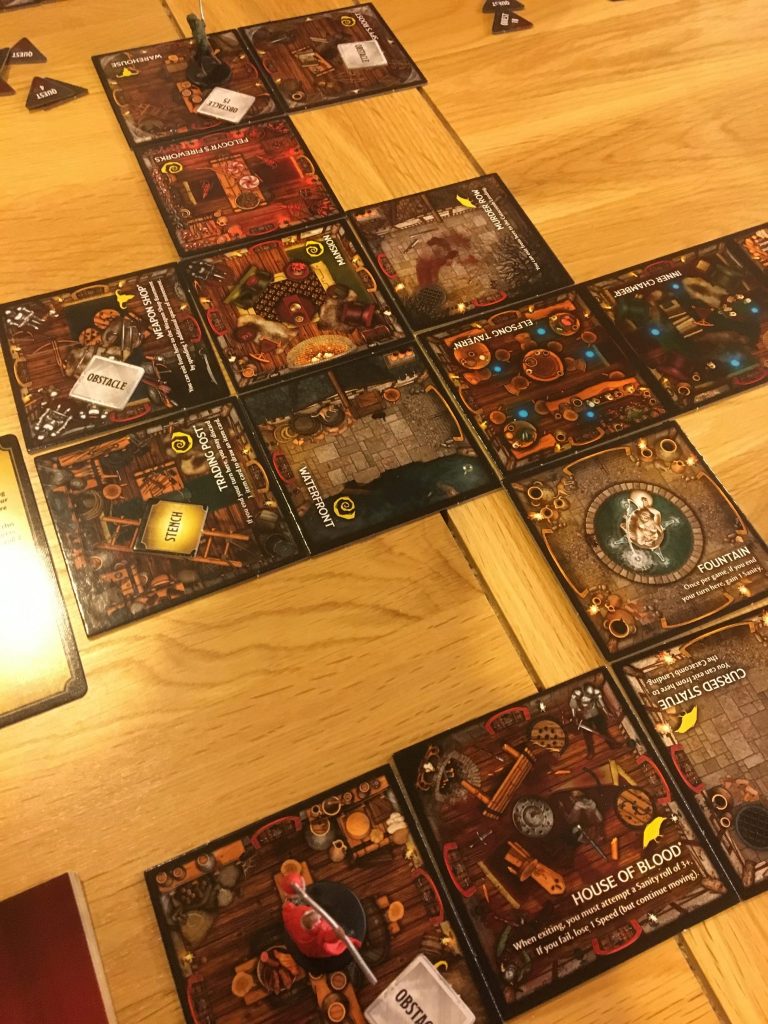 A particularly neat feature in Betrayal is the way in which The Haunt is triggered, which specifically relates to how many omen cards have been drawn. Each time an omen is drawn, the player who drew it must first resolve the text as described and will then make a Haunt Roll. This involves rolling a dice for each omen card currently in play, including the one they just drew. If the result is a six or more, The Haunt triggers, although it is worth bearing in mind that dice in Betrayal are custom and two is the highest number shown on any face. Haunts usually occur somewhere around the fifth to seventh omen card and the tension during these increasingly more likely rolls can be palpable if the group is attentive and excited about what lies ahead.

When The Haunt is (inevitably) triggered, the player who triggers it opens up the Traitor’s Handbook and reviews a table on the first double page. Depending on which combination of location and omen cards were the trigger, the book will advise them of who is the traitor and which Haunt number the players will now be faced with. Sometimes (a little too often for my liking) The Haunt pitches all of the adventurers against the game, which is nowhere near as fun as when one of your friends takes on the role and is able to unleash their full deviousness.

The Haunt is the point in Betrayal where things can go wrong, but in Betrayal at Baldur’s Gate at least, it happened considerably less frequently than I was expecting it to. Objective and room position can go awry due to the random nature of the board, making it impossible for one or the other side to succeed, but it is incredibly rare and can be easily overcome by a sensible decision to introduce a house rule that fixes the situation. A more frequent issue is that one side or the other either simply cannot complete their objective within a given time limit, or has already met the victory condition before The Haunt began and so wins immediately.

Regardless of which Haunt was activated, I couldn’t help but marvel at how varied the objectives and scenarios were from one game to the next, which led to me insisting we play the game over and over again. In one game we were securing a temple against a rampaging hulk, whilst in another we ran from tile to tile hunting for dragon eggs whilst the furious mother torched the city around us. In our first game to feature a traitor, it was revealed that each of the loyal adventurers had been implanted with a parasitic creature and we only had a few turns to survive, whilst our traitor fought to ensure the longevity of his offspring.

To achieve such a myriad of possible outcomes, Betrayal at Baldur’s Gate comes with an absolute shovelful of tokens and bits and bobs which perfectly compliment the already jumbled, hand-built board and often ridiculously overpowered decks of cards that players hold. It never really matters that the game can go nuts during The Haunt because in fact, it’s usually been building up to just such a scenario from the very start. There are so many magical totems, spell books and weapons strewn around the streets of Baldur’s Gate that the sheer radioactivity of it all must be responsible for some of the strange occurrences that players are expected to put up with, so if you’re not well prepared when The Haunt happens, it’s probably going to be one of those days!

In terms of the quality of these components, I have no complaints whatsoever. The board tiles are chunky and colourful, as are the character cards, whilst the decks of cards all fit the theme and include fun flavour text, albeit with mono-coloured artwork. There are three thick, full colour books for instructions and traitor/adventurers which are all clear, well written and filled with examples. Sure, some of the Haunt-specific rules can be a bit janky, but its nothing you won’t be able to work through. The painted miniatures are a really nice touch, whilst the massive pile of tokens do a decent job considering how infrequently you’ll see each one.

Considering that it’s already winter (let alone almost Christmas) and people are dragging out their old board games and dusting them down for a quick game or two, you could do a lot worse than adding Betrayal at Baldur’s Gate to your (or their) collection. Betrayal is known as a party game that players anywhere between about thirteen and fifty years old can enjoy, but this Baldur’s Gate edition simply smooths some of the old wrinkles out, applying a varied and suitable theme which will be familiar to absolutely any serious gamer.

Betrayal at Baldur’s Gate is not a game that you can enter into expecting the most polished experience, but it is a game that you can expect to have bucket loads of fun with. It has a light but enjoyable theme, it tells amazing stories which are both present on the page (and in the world you and your friends will build) but also generates fantastic conversation at the table. The defining moment of what this game is about for me came when we compared the current in-game situation to four gentlemen who (whilst on a stag do in Amsterdam and clearly under the influence) were attempting to barricade their room whilst a concerned member of staff banged on the door. That probably won’t make any sense to you right now, but if you play this game enough times, I think you’ll know exactly what I mean.

A copy of Betrayal at Baldur’s Gate was provided for review purposes and can be purchased via 365 Games or through one of the shops found in this handy Store Locator.