Sand beasts, gladiatorial duels, alchemical weaponry and much, much more are added into the already expansive Battle Brothers world by its new Blazing Deserts expansion.

Six years is a very long time in video games, almost a whole console generation. But, today we’re talking about a game that first came onto my own radar (while on my first website, before the sunny days of B3) back in 2014. It’s been an incredible journey for the game, which made it through Steam Greenlight before releasing into early access in 2015. This week the Blazing Deserts expansion released for the notoriously tough tactical RPG and it slots perfectly into the existing game.

The vanilla Battle Brothers experience covers a splash of mostly temperate lands, ranging through forests, plains, tundra, mountains and swamps. Towns litter the terrain and, between them, dangerous enemies and factions roam almost freely. You play the head of a mercenary band, managing resources, taking contracts, and directing your squad in combat. Beasts and Exploration filled out that area and added legendary locations and ways to develop your troupe, Warriors of the North strapped a grizzled tundra to the North, and now Blazing Deserts has populated the desert area to the South. It makes for a map that feels twice the size of the original, and certainly much denser because of it.

But, Blazing Deserts is much, much more than that. It’s easily the most substantial of the DLCs so far, and frankly, it makes the other ones pale in comparison. A quick look at the features list for Warriors of the North reveals a list that, in retrospect, I’d sum up as ‘It adds origins, new factions, a champion system and then builds on existing content’. 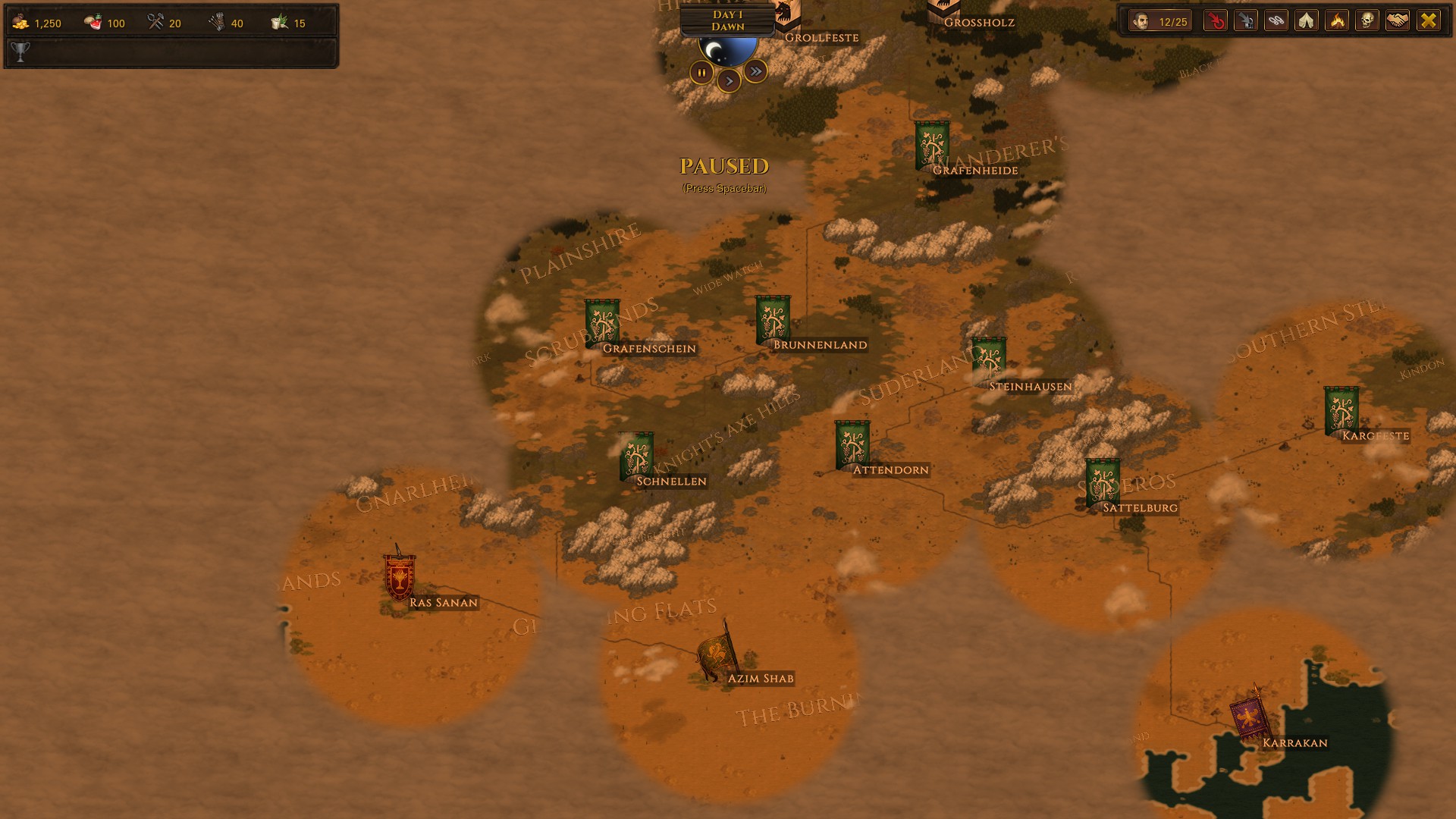 Comparatively, Blazing Desert adds new city types, new services, non-combat support units, an arena where you can enter gladiatorial battles, the – expected – new factions and enemy types, and a whole bunch more.  The gladiatorial, arena battles, as well as the new trade goods which come with the new cities open up a handful of new ways to play — reminiscent of Mount & Blade, trading or touring as a gladiator suddenly becomes a viable career path.

It’s not only that though. there are two systems which really changed the way that I played Battle Brothers on a foundational level. The first is the addition of slaves. There’s a new origin where you can recruit those who don’t-quite fall in battle as front-line combatants for your groups, it’s a strange, dark, merciless path through the game, but even if you are not playing this route you can still buy slaves into your warrior band. These troops simply need feeding but never paying. This can completely change the payment structure of your army — and it certainly made my income stretch a little longer on a tougher run. That said, I didn’t manage to start any ‘freed slave’ event, and I’m not sure if one exists. I remain hopeful that I can free these troops from serfdom, although I’m not sure if that fits with the mood of Battle Brothers. 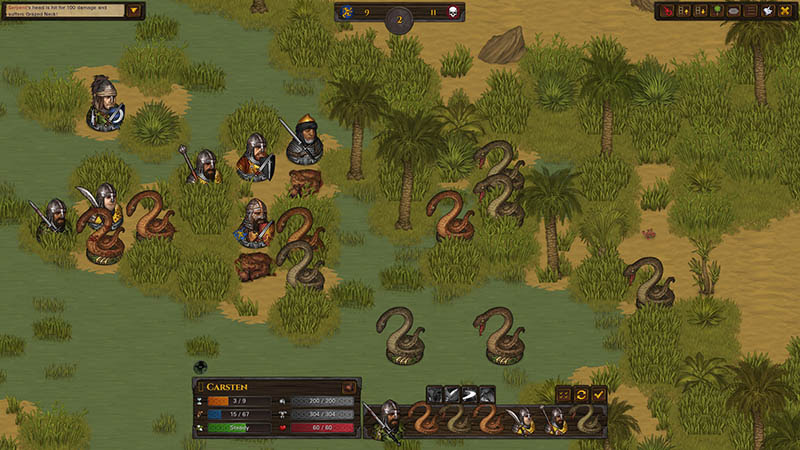 Secondly, the retinue is a complete game-changer. Once you hit certain milestones you can recruit (for a lofty fee) experts to your retinue. These can allow you to ALWAYS recover shattered goods in combat, be able to feed your troops with less food, stop your troops from requesting more pay or even highlighting caravans around the map. There’s a whole bunch of them, and even at your strongest, you can only have five of the eighteen at any given point in time. These experts can completely restructure any stage of play, not least because most of the requirements are easy to meet very early on.

Alongside all of this, there’s been an unbelievable depth of content made to pad out the setting, the new armour and gear are absolutely exceptional, and the new Southern regions feel much more historical and appropriate than the exaggerated Northern Warriors and even the struggling medieval-era Germany-inspired core lands of the game. If you do look at it from a historical-meets-dark-fantasy angle then the firearms and contraptions that the new faction brings are bang-on as well. 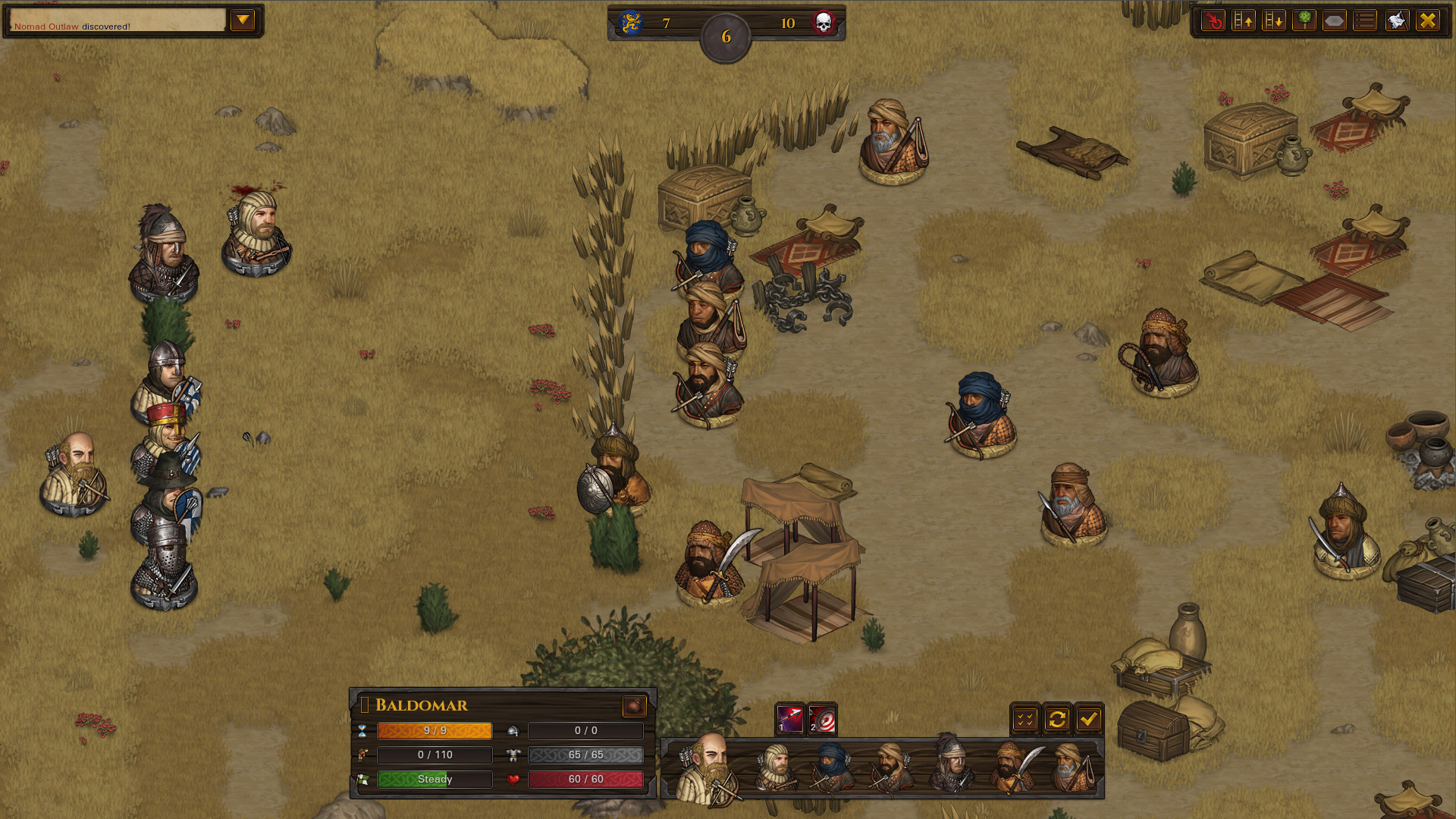 I know that I’ve been wholly positive throughout this article. I’ve played about 12-15 hours of Battle Brothers: Blazing Deserts over the last two days — since I got code — so maybe there’s some ugly out there that I’ve not spotted. But when I gladly called Battle Brothers one of my favourite games previously it was because the content (at the time) felt perfectly balanced and extremely satisfying to play. Blazing Deserts literally feels like it makes everything better, and — dare I say it — really helps make the world feel better, more rounded, and filled with more potential.

Battle Brothers: Blazing Deserts is available on PC now. It will, presumably, release on Nintendo Switch in future.