If you haven’t heard by now, Axiom Verge is one heck of a good game.  Having made its way to nearly every modern system already in close to three years of existence, Axiom Verge is back for one more go around, this time on the Nintendo Switch. In this incarnation, the physical release of the Multiverse Edition adds in some goodies such as posters, booklets and a ‘making-of’ documentary. If you don’t have the game already, it’s about time you do. What exactly have you been waiting for?

The story begins with Trace, who awakens in the strange world of Sundra after a lab accident causes an explosion on Earth. Not entirely sure if he is trapped in a simulation, sent to the future or even on another planet, Trace sets out to unlock the secrets hidden in this world and embarks on his journey to defeat a menacing inhabitant named Athetos.

The rest of the story is actually quite compelling; the twists, turns and reveals will keep you guessing for quite some time. While eventually you may guess where the story is going (although you’ll probably be wrong), if you do have an idea, it will be long after you are already well invested in the game. It’s both a smart and clever narrative which will keep you going to the end and then some, as there isn’t just one single ending, either. This isn’t just a good story for a Metroidvania — it’s a good story in any genre or medium. 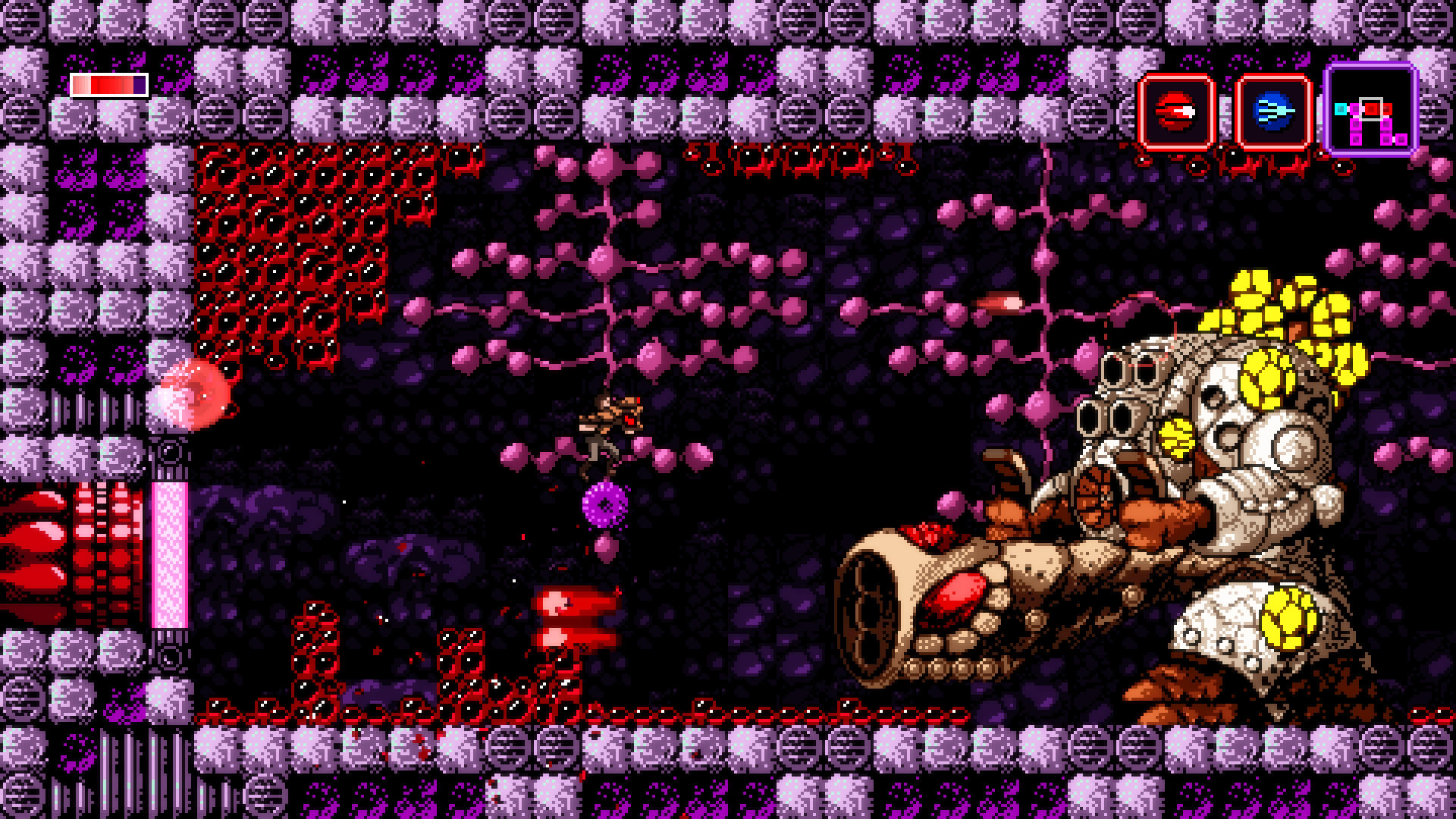 Now, if you haven’t played this yet, you’ve probably at the very least heard of it. The reason for that is simple: behind the great story there is also a great game. When you think Metroidvania, there is that air of nostalgia that comes with it.

Axiom Verge lists such titles as Bionic Commando, Blaster Master, Contra, Rygar and of course Metroid as influences — all games I know well and have fond memories of. Funnily enough, though, going back to play most of those titles doesn’t have that same feeling they first had. Metroid especially stands out as one where the memories were far better than going back to play the original again, even with the right equipment. The greatness of Axiom Verge is not that it mimics those past greats exactly as they were, but rather the fond memories we have of them, even if our memories don’t quite match the reality.

So let’s break things down, shall we? The map is that classic, non-linear world, filled with hidden secrets, abilities to unlock different areas and a whole arsenal of weapons. It’s well designed and sprinkled with just enough save points that the challenge is still there, but without the need to endlessly retread far more ground than is needed to get back to your last location before death. The only real issue I had was that all too often it felt like adding an ability didn’t open up much, if anything, where you had previously tread. There are occasions where it does indeed unlock areas behind you, but there was a more ‘forward’ push than I anticipated. Going back often felt like a waste of time until the game’s ‘forward motion’ naturally looped you back towards that area. 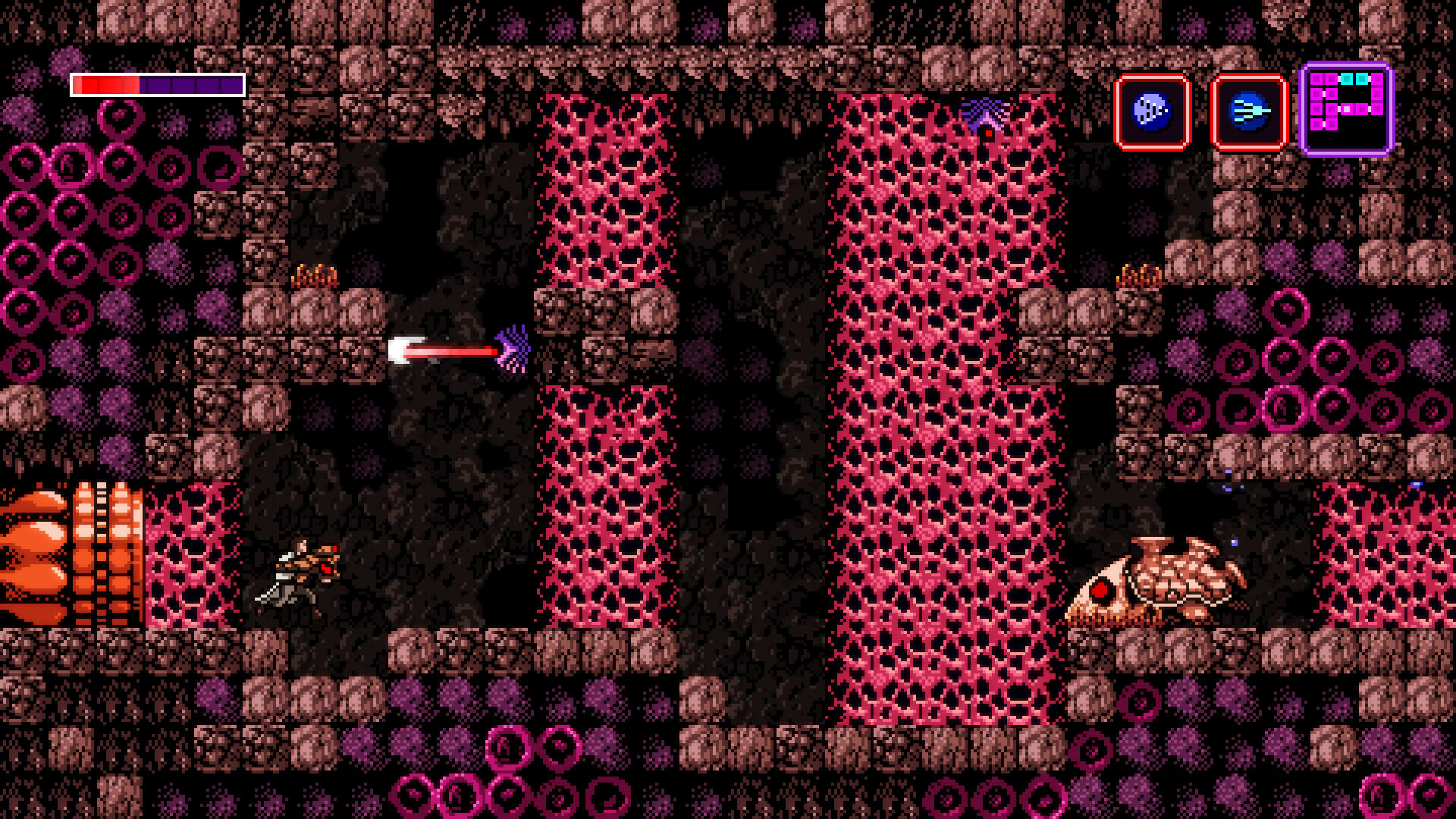 With that said, there are more than a few hidden areas to be found. In general, though, most should be fairly easy to spot by genre veterans, who well know that that ledge seemingly there for no reason does in fact have a reason to be there. But even going into hidden areas, there were puzzles still to be solved, including a few I eventually just had to let go, as I couldn’t see the way through,. This was fine as they were for non-essential items. And yes, there are more than enough items to go around and make gathering everything an option rather than a requirement for beating the final boss, although that may lead to a different ending. Of course there, needs to be plenty of hidden rooms to accompany the rather massive arsenal in Axiom Verge.

The list of weapons is extremely large and diverse. There are so many of them that I lost count — certainly good for diversity and accommodating multiple play styles. Towards the end, though, the weapon wheel did get rather busy to look at, and at times adding another gun just made finding the few I liked the best harder.

This get us, briefly, into the controls. Overall they are nice and tight, but there were a few joy-con/Nintendo-related issues. Weapon selection is done using the right control stick. Once again, the small size of the joy-con controllers often meant I would accidentally hit the right stick, bringing up the menu in the course of normal play. The other is a seemingly simple thing and more Nintendo-specific — mainly the use of B to advance/confirm rather than A. I know that Nintendo is the oddball here in that it uses the right face button (A) to advance, rather than the bottom face button like every other system. Using the same convention as the rest of the games on the system would be nice. 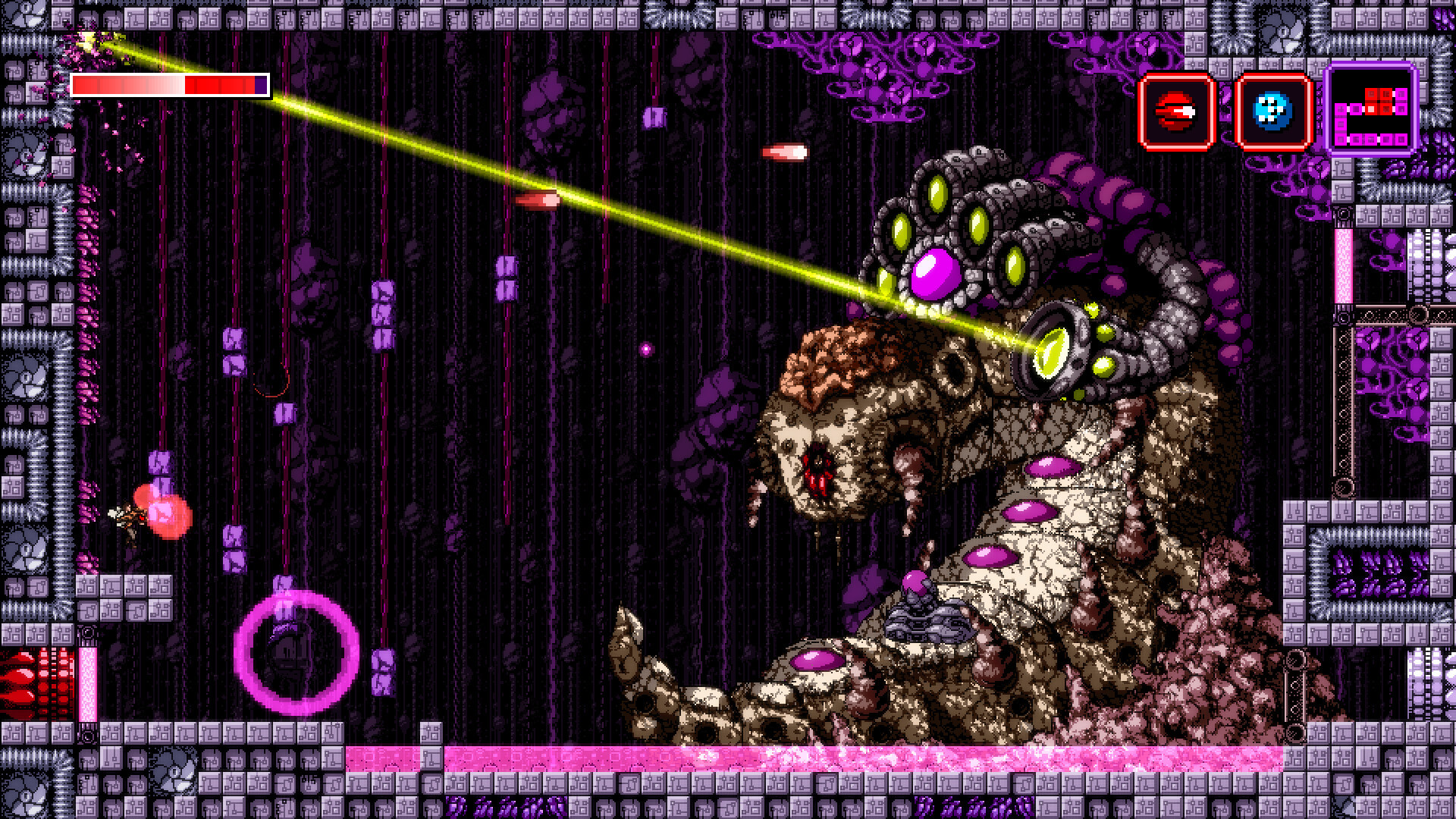 I could go on and on about the good points of Axiom Verge for quite some time and rightfully so, as there are a lot, but I think you get the point by now. It’s certainly a labor of love, and it shows, so it may come as a surprise that such a wonderful game was made by one person: Tom Happ. A game as thoroughly consistent as this is — from the art to the story and music — shows one singular, cohesive vision. I can’t pick a single thing that stands out as being an odd decision, or even just slightly out of step. Every single bit of it works together and on top of one another.

If this is a game you’ve been eyeing up for a while now, but for whatever reason have not got yet, just stop, go out and get it now. It’s a must have for any Metroidvania fan out there. It’s not just for genre fans only, though — Axiom Verge can easily be enjoyed by all.