Aliens: Fireteam Elite is more Cameron than Scott, but it still hits the mark

It’s a sad truth that most games based on the Alien universe are rubbish — just like the majority of the films. Yes, this wonderful intellectual property has spawned more lumpy, unattractive little horrors than any xenomorph queen ever has, yet the allure of those terrifying beasts and the iconic sights and sounds that come with them is as strong as ever. There’s a good chance that Aliens: Fireteam Elite is just another blip on the motion sensor but I, for one, sincerely hope not.

Designed very clearly in the mould of Left4Dead, Vermintide and every other squad-based cooperative shooter of the last ten years, the only new feature that Aliens: Fireteam Elite brings to the party is the strength of its IP. Thankfully, it uses that IP incredibly well from the very outset. It doesn’t concern itself with too much nonsensical story, and instead, players are free to choose their class and embark relatively quickly. 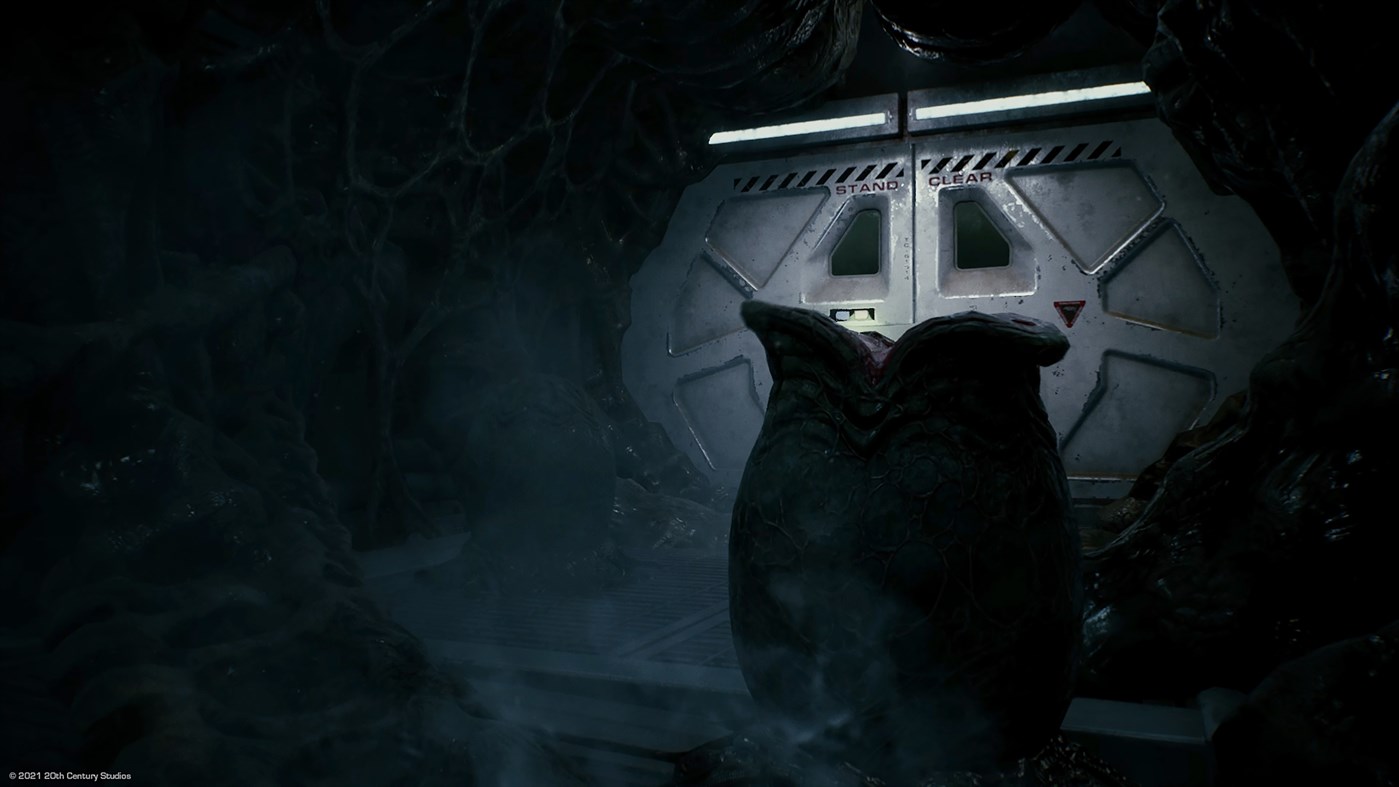 The missions (of which there are twelve split across three separate chapters) each take us to a location which will be familiar in architecture and or visual cues to anyone who has seen the movies. From Weyland-Yutani freighters to the giant architecture of the planet in Prometheus, and onwards to the slime-filled alien corridors of Aliens, it’s all recreated faithfully and in high-definition detail.

Player controlled marines are just as well done, with the kind of 1980’s sci-fi-make-believe headgear that you just don’t see in films these days overlaid against Vietnam-era body armour that has no place in space. These accoutrements would doubtless be useful against the xenomorphs if they were real, but I remain ever grateful that no one has yet “reimagined” this universe (at least not yet).

The xenomorphs themselves are pretty glorious, looking and moving in just the right way. Standard aliens are fast and agile, emerging from hidden vents and ducts from all directions, and moving seemselly across walls and ceilings when it suits them. Special variants include larger Drones and Warriors, as well as Acid Bursters, Praetorians, Prowlers and then a couple of other rare variants who’s name I can’t remember. 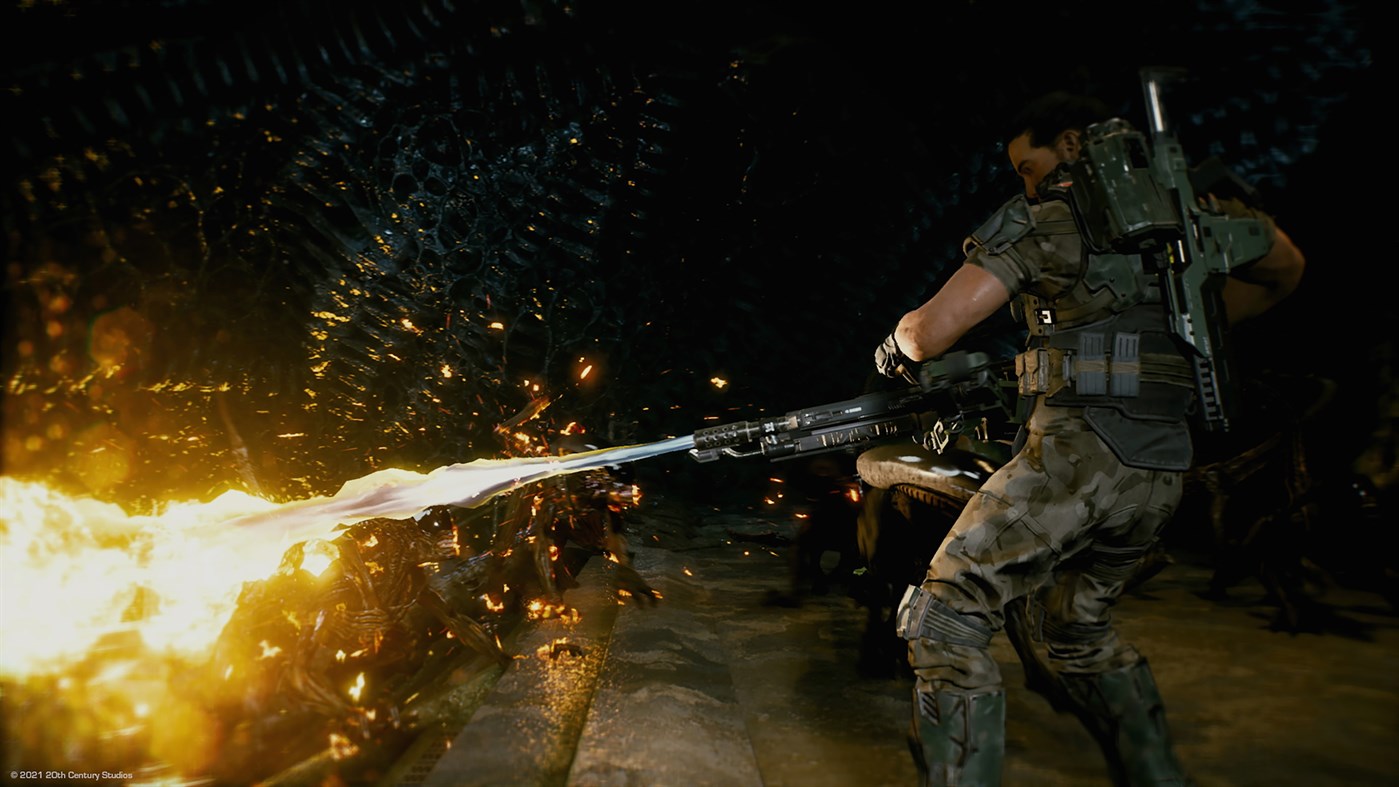 The variety of enemies is impressive, and the way in which Aliens: Fireteam Elite uses them is well done. Essentially a series of relatively straightforward corridor exploration sequences interspersed with large set piece battles, Aliens: Fireteam Elite is a little too simple — so it really has to nail it when it comes to executing these two styles of play — and generally it does.

When exploring, most missions will drive the player fireteam (consisting of up to three human players with one or two NPC bots filling in any gaps) down a fairly linear path. The incentive for straying off this path comes in the form of Hidden Caches, which offer Challenge Cards, cosmetic items and occasional weapon upgrades — and are definitely worth it for the former and the latter (and I dare say some people care more than I do about how their marines look, too).

During these sequences, and especially on either of the two (very, very hard) difficulty levels, it’s essential not to separate — because prowling enemies (like those in Left4Dead) can either hurt you very badly or potentially even deal lethal damage. This careful — but rapid, because aliens never stop spawning — progress is very different to the approach you’ll need to take at each of the set piece battles (of which there can be four or five per level). 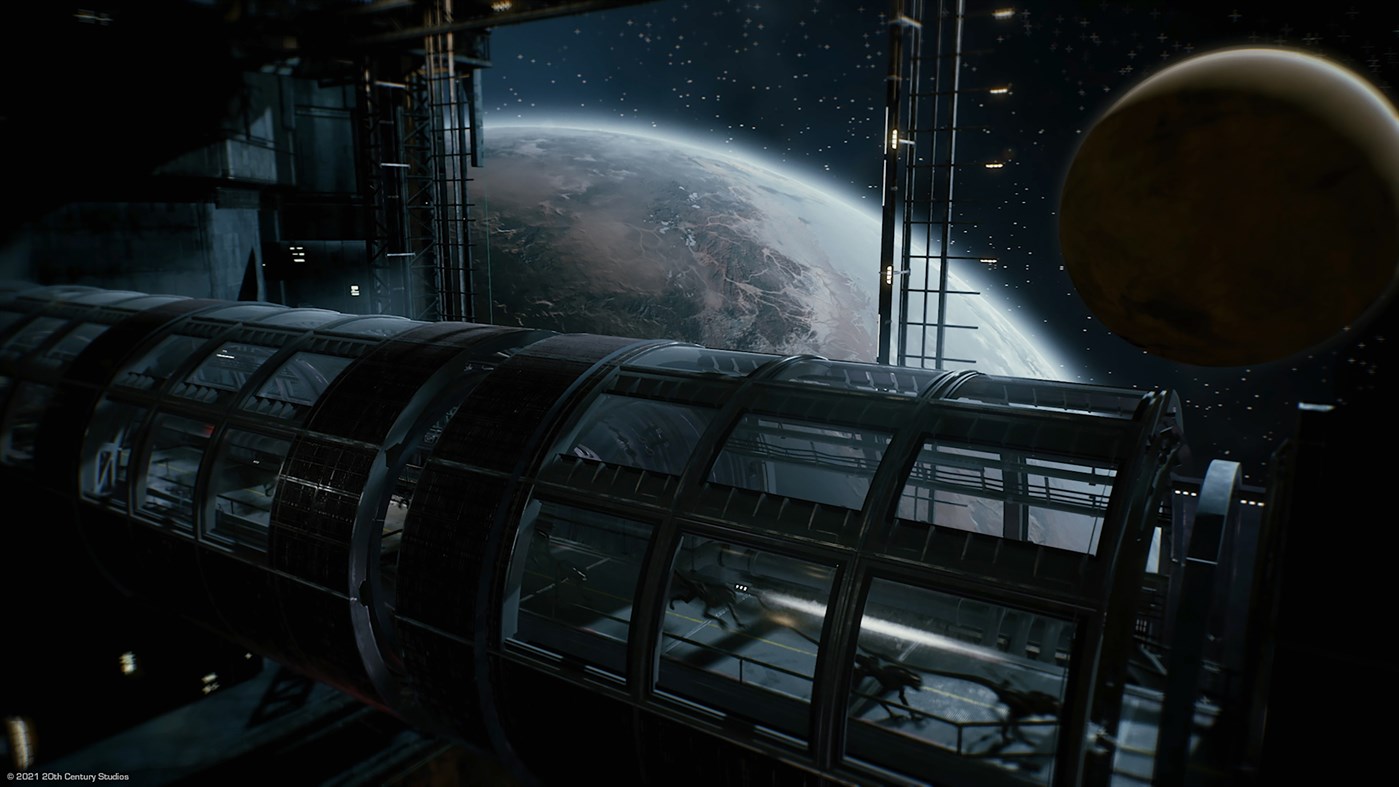 Aliens: Fireteam Elite signposts each such battle by asking the players to do something that will almost certainly make noise or attract attention, somehow. This is a game that has more generators and engines to fire up, more lifts that need to ascend 500 floors and more databases to hack whilst alarms go off than every other game you’ll ever play combined. But that’s fine, because each such segment is also punctuated by an ammunition box, some health kits and often a supply crate (not to be confused with the Hidden Cache I mentioned earlier).

These slight pauses work in a similar way to the safe rooms from similar games, though I would say that Aliens: Fireteam Elite misses a step by not really making them “safe.” Enemy aliens will often continue to spawn whilst players prepare, and the main function of a safe room — which is to provide a checkpoint for respawns — is lost. Instead, if the squad all die during a mission, then it’s right back to start — which can sometimes be 30-40 minutes.

Regardless, both kinds of play in Aliens: Fireteam Elite are more exciting than I thought they would be. They are somehow more than the sum of their parts — and I think this is simply down to superb use of the IP. These levels and the aliens and synthetic guards that patrol them haven’t ceased to intrigue me yet — even on my fourth playthrough the campaign (which is honestly too hard and I think will be my last). 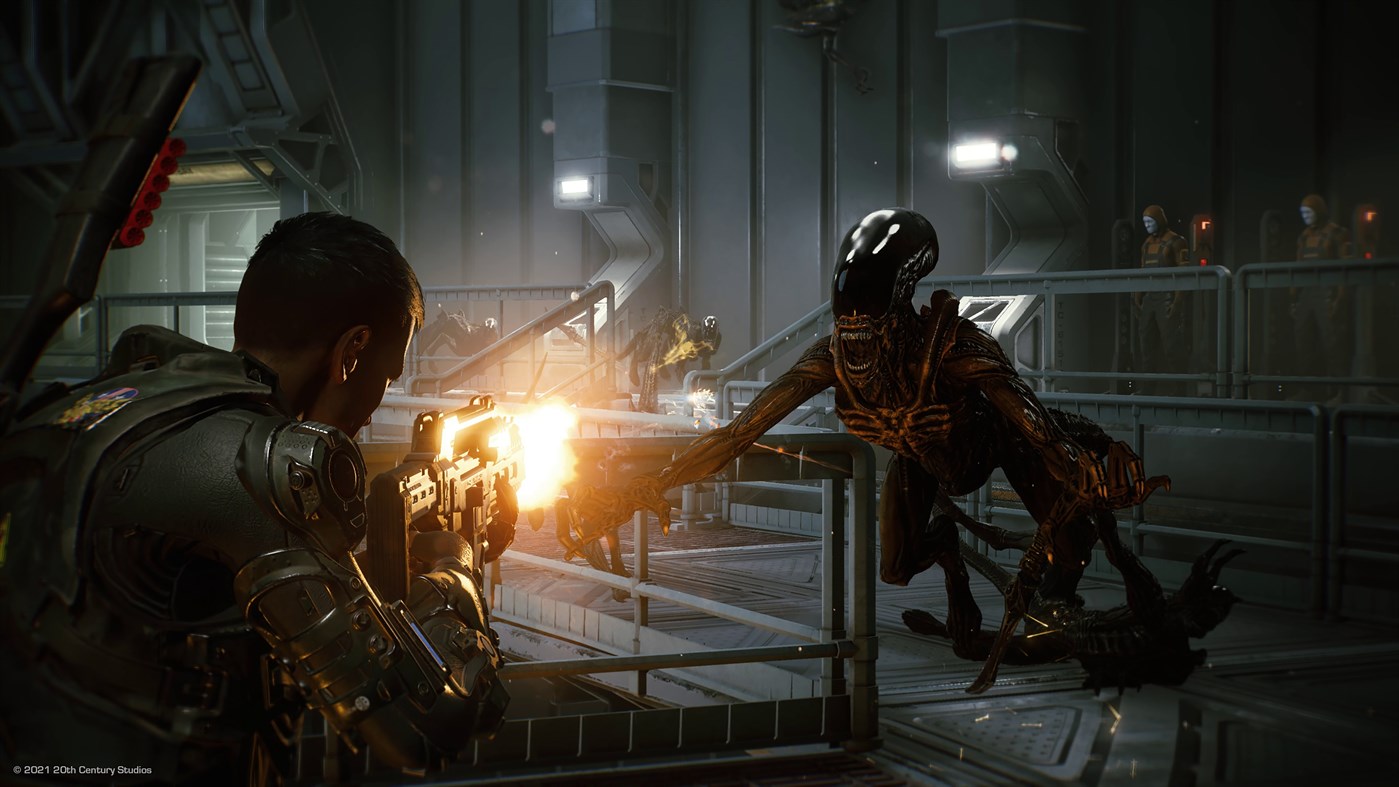 Between missions, players can access that paper thin story if they really wish to by discussing aspects of what is happening with their ship-mates. One nice additional touch here is that when a player finds intel on the map (scattered in hard to reach places) new dialogue opens up, so you really do have the option to see more or less story depending on your preference.

Probably more pressingly in between missions, you’ll want to work on your loadout. Marines are split across classes like Gunner, Technician and — if you have some kind of DLC (I’m not sure which) the Phalanx. Each class has access to two weapons, an ability and then some kind of throwable like a grenade. That’s all pretty normal, really, but Aliens: Fireteam Elite also layers in a very nice, customisable perk system.

As a player levels up a specific class, they will access both new perks, and more space to slot them in. Most perk upgrades link to others on a sort of “board” into which new upgrades will fit. It’s this board where those new spaces can be unlocked, allowing players more space to both add perks and to find creative ways to link them to each other – it’s simple, it’s clever and it’s highly customisable. 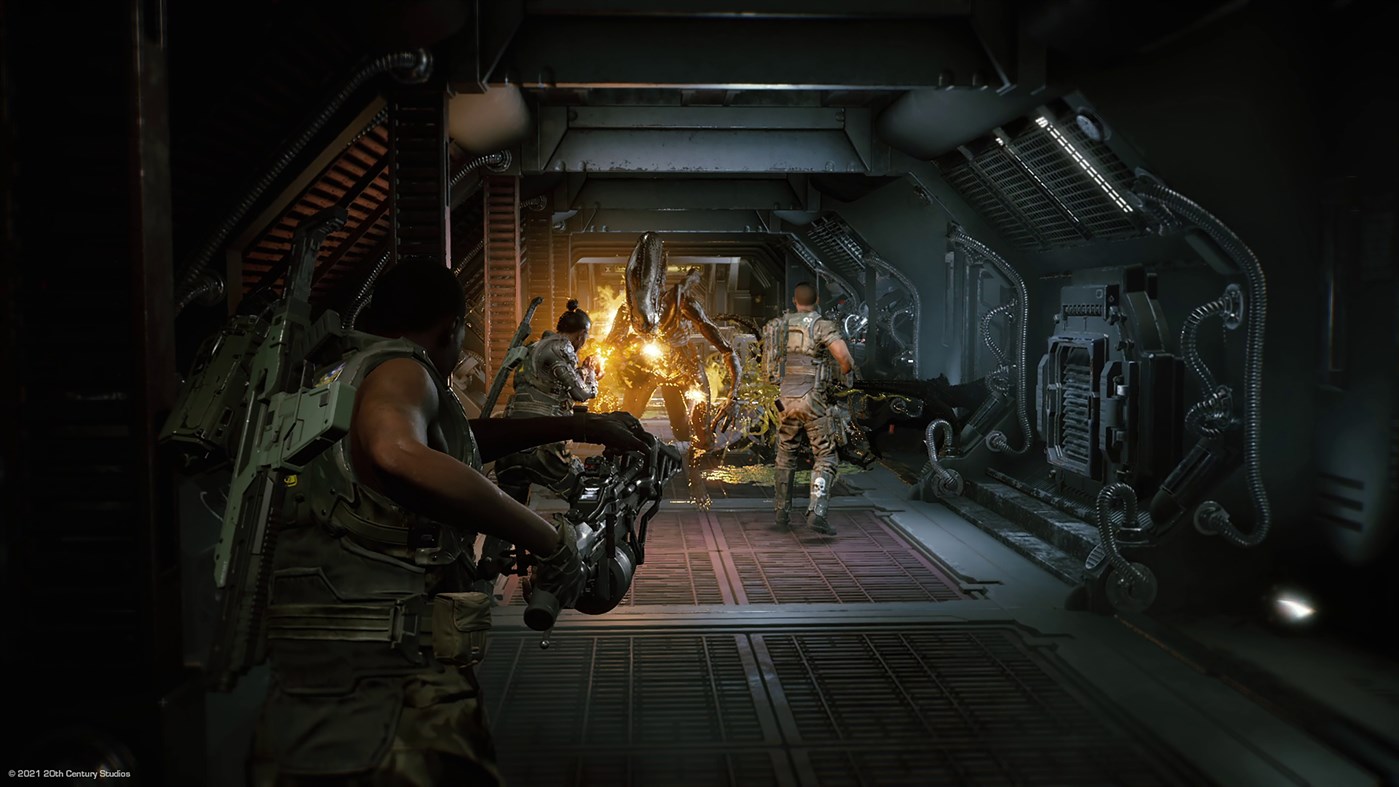 Aliens: Fireteam Elite is not sophisticated and it does nothing to change the gaming landscape for the better — but what it does do, it executes well. With a campaign that is made re-playable by a genuine ramp up in difficulty level, the use of those Hidden Caches and a lot of replay value in the class-levelling system, the only time it frustrates is when you die and have to restart one of the “unfairly” tough missions right from the start.

You can find Aliens: Fireteam Elite on PlayStation, Xbox and PC.