7 Wonders (Second Edition) is an old treasure, brought back to life with spit and polish

Antoine Bauza’s 7 Wonders is — apparently — one of the most awarded and best selling modern board games in circulation. Its city-building gameplay is evocative of the Civilization series of video games, yet its light mechanics and support for up to seven players give it considerable flexibility.

However, 7 Wonders is ten years old now, and thanks to both improvements in design and production capabilities and thousands of hours of playtesting, it’s been due a Second Edition for a while now. 7 Wonders (Second Edition) is my first experience with 7 Wonders as a physical game, however, I have played the original on BoardGameArena about fifty times since lockdown began. 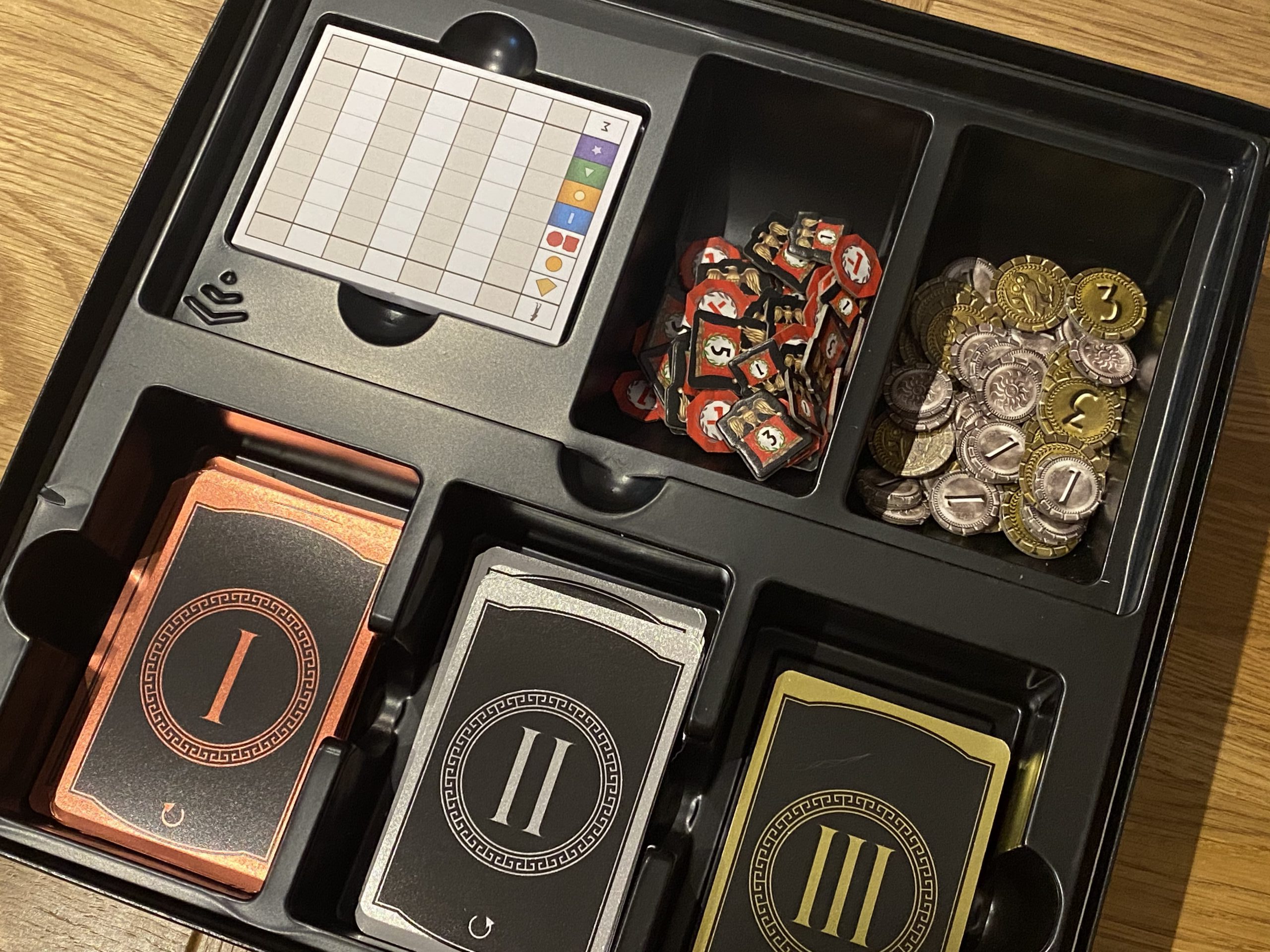 The concept of 7 Wonders (which I won’t call Second Edition any more, but please do assume that I am talking about the new version) is simple. Each player draws (either by agreement or randomly) one of the seven wonder cards, and chooses (again, either randomly or otherwise) the Day or Night side.

That player will represent their chosen wonder (and the city in which it belongs) throughout three ages, by building up basic infrastructure and generating culture, science, gold, military strength and so on. Ultimately, the winner will be the player who, at the end of the third age, has gathered the most points on behalf of their city.

Points can be earned via buildings, military victories or through the collection of various science icons that make up sets, and each game tends to finish with the players scoring between about forty and fifty points. The promised thirty to forty-five minutes is just about all it takes to play a game of 7 Wonders, which is really something when you consider that it supports up to seven players and doesn’t increase much in length from min to max player count. 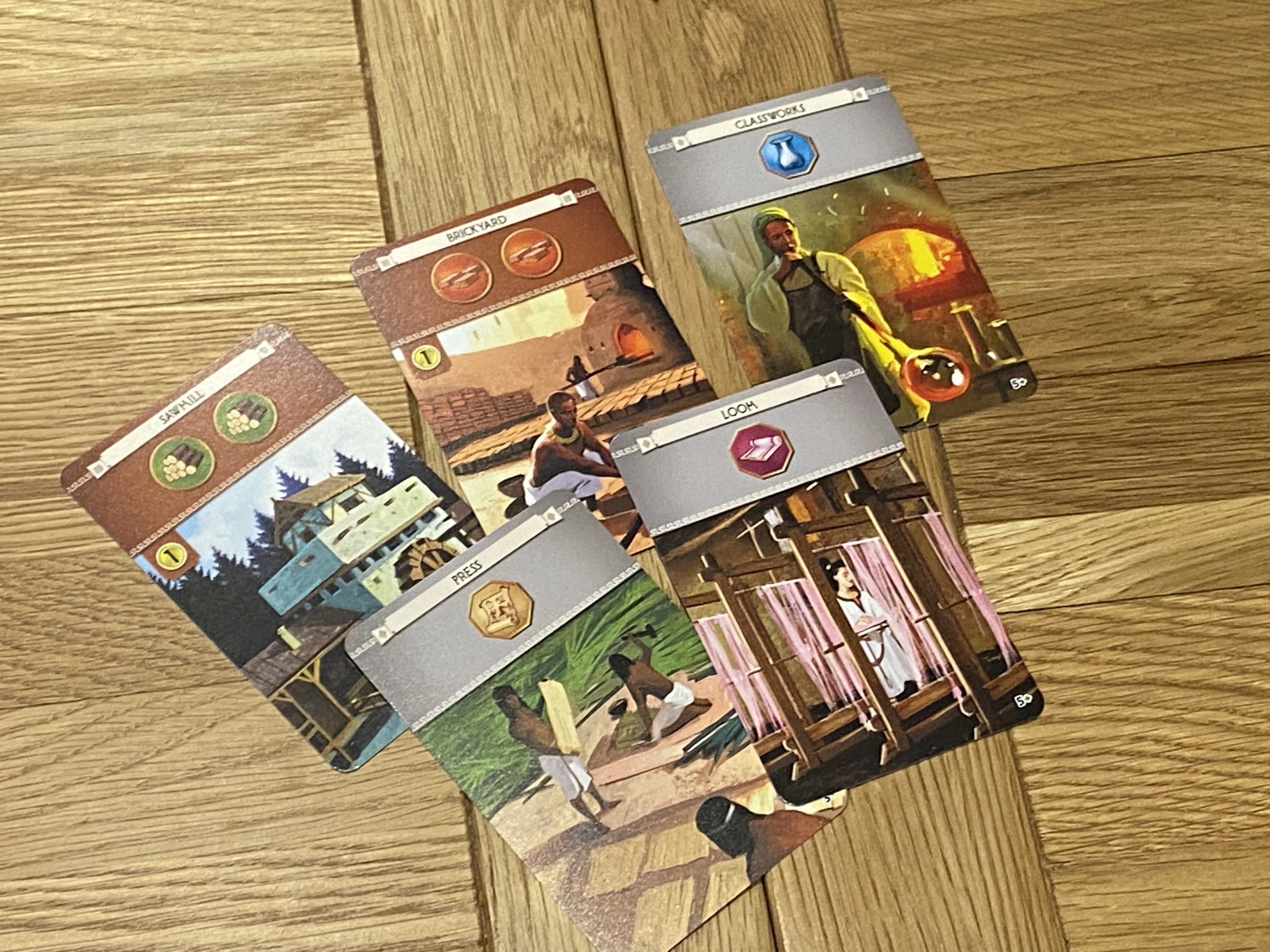 The mechanics of 7 Wonders are simple to learn. Each age begins with the players being dealt seven cards, from which they will choose just one, before passing the remaining six cards face down to the player on their left. With the card they retain, they will choose one of three actions to take with it. They may either build it, use it to add to their wonder, or simply sell it off for coins.

To build a card, the player will look at its cost (on the left-hand side) and must pay either gold or have matching symbols already in their city, for example, wood or stone. If the player can’t pay the gold price, they can’t build the card. If, however, they don’t have the matching resource symbols but their neighbours do, a player can “buy” those resources for two coins per symbol needed — paid directly to the player who provides the required symbol.

In addition, some cards form chains that allow later buildings to be constructed for free. As an example, if you were to construct the first age Theater building, you would be able to construct the Gardens card in age II for nothing. There are several other examples of this, and setting your late game in motion through choices made at the start of the game is very important indeed. 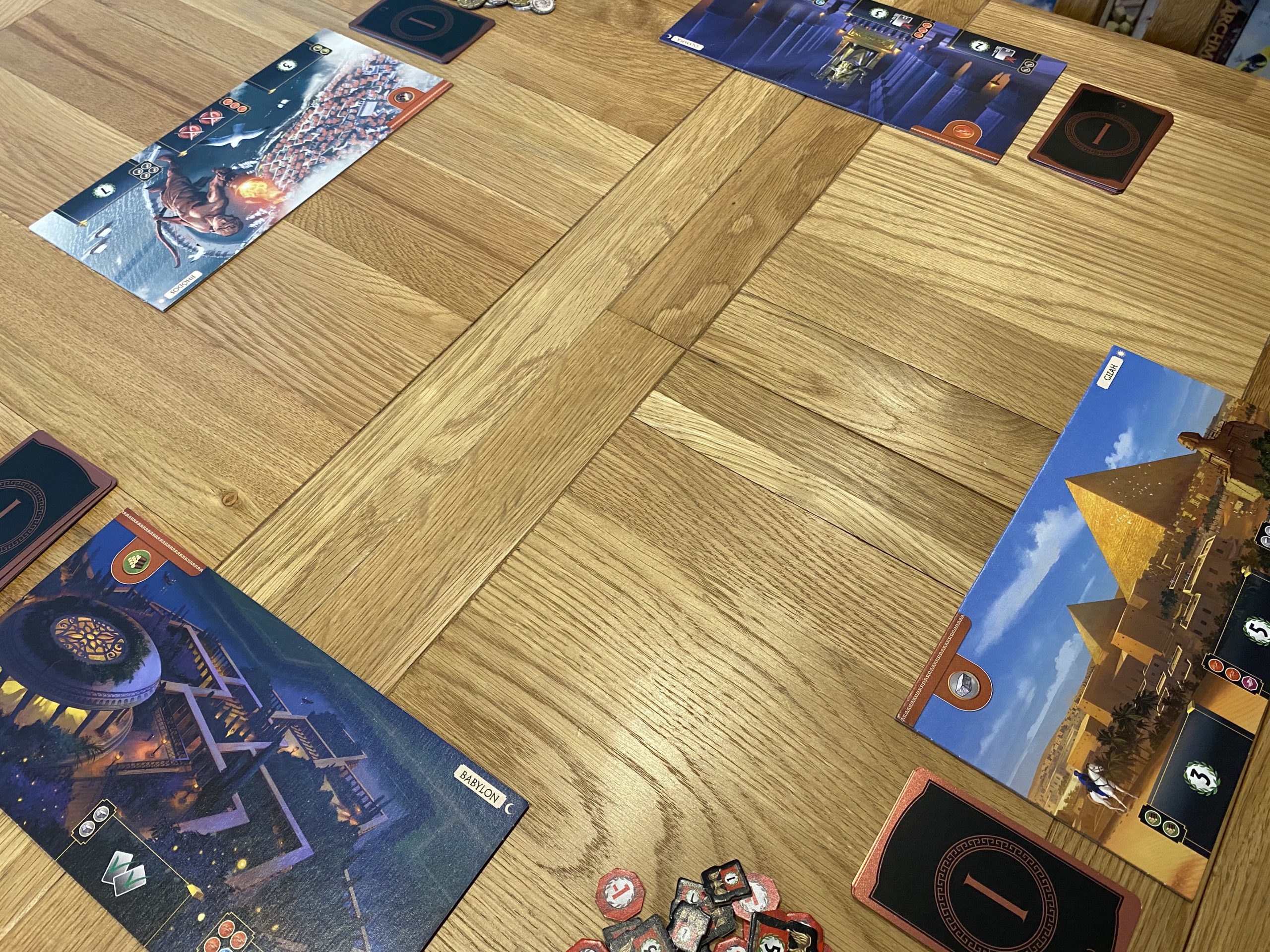 If, instead, the player wants to use a card to build up their wonder, then each of the three slots (from left to right along the bottom of each wonder card) must be filled in order. Each has its own combination of symbols or gold (much like a building card) and it is that cost which will be paid when a wonder is advanced. In this case, the player will slide the card under the wonder board, in the slot which has been paid for.

The final option, which players will need to exercise from time to time, is to simply discard a card and to claim three coins instead. This will often be reserved for late in the age, when quality cards are becoming fewer, and potentially because a player has simply run out of resources, which is also a common problem.

Each player will work their way through six cards per age in this way, choosing one from the deck passed to them and then taking the action of their choice with it until finally, only two cards are passed to them. At this point, the player will choose one and discard the other, and when all players have made their final choice, the age will end. 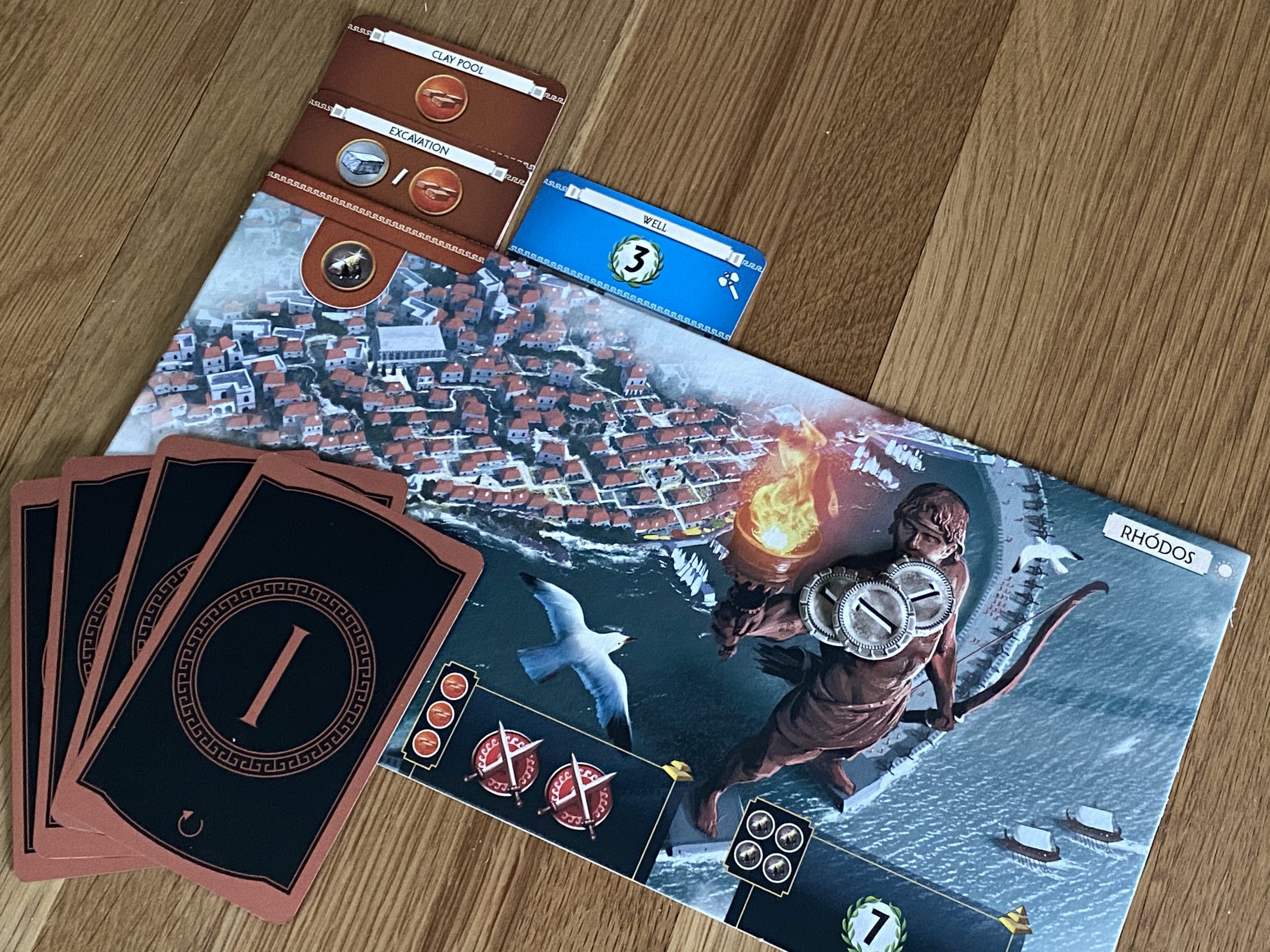 This is significant because of the fact that 7 Wonders not only consists of three ages per game but also because each deck associated with ages I, II and III is different, with increasingly more powerful cards appearing in later ages. At the end of each age, the players will also compare their military might (based on the red military symbols in their city) with their neighbours.

For each comparison made where a player has a higher or lower value than their neighbour, a plus or minus token must be taken. For example, if a player has two military symbols and their neighbours have one and three respectively, then that player will receive one victory token and one loss token. These tokens act as positive or negative points at the end of the game.

Also counted at the end of the game are the green science cards, which come with three symbols on them. A player will score up to 36 points for having six of the same symbol, as well as an additional seven points for having sets of three different symbols. As I mentioned earlier, games tend to hover around the fifty mark, so it’s quite rare — but not impossible — to see such sets of science cards established. 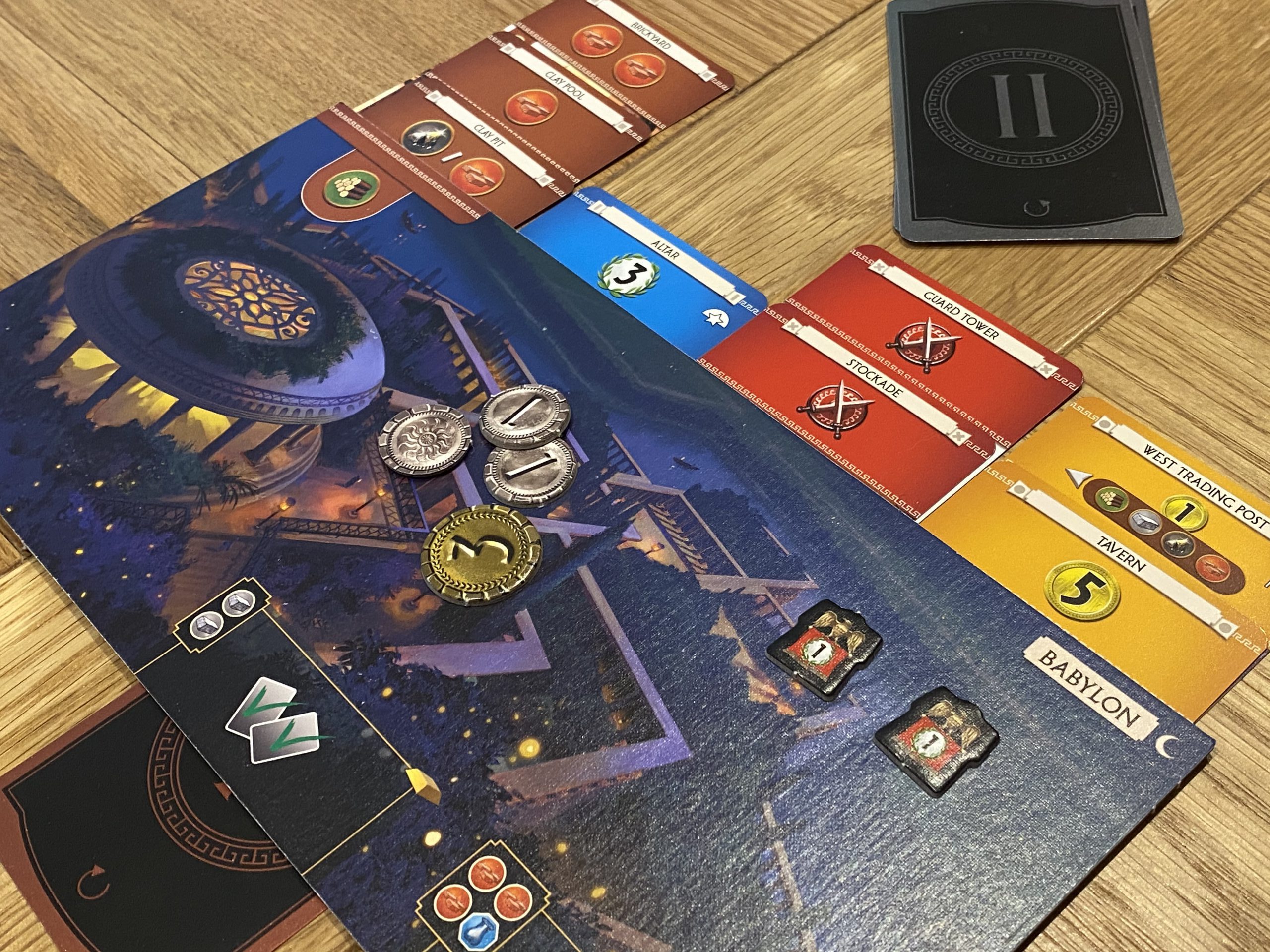 And that, folks, is 7 Wonders. It’s quite hard for me to say exactly what has changed in terms of the specific tokens and cards since the original game, but given my experience with both games, this Second Edition is certainly more than just a cosmetic upgrade. The wonder boards, for starters, are quite different from those in the original game — including the new day and night art on either side.

There are also about ten or twenty new or changed cards, with the changes focussed mostly on ensuring a more balanced experience and on accounting for the changes made to the wonder boards. I certainly haven’t tried every combination or got anywhere near the seven-player maximum (given lockdown) that is needed to fully test 7 Wonders, but all the wonder combinations and sides I have played seem well balanced, and there’s a good mix of science, military and civic approaches to winning to choose from.

Perhaps the main difference between 7 Wonders Second Edition and the original is the new, larger age cards, which come with a lovely (but easily scuffed) metallic finish. The artwork and symbology is also improved, and the inclusion of a system of symbols that aid colourblind players is welcome. A new set of player aids and a clear, concise rulebook finish the product off nicely. 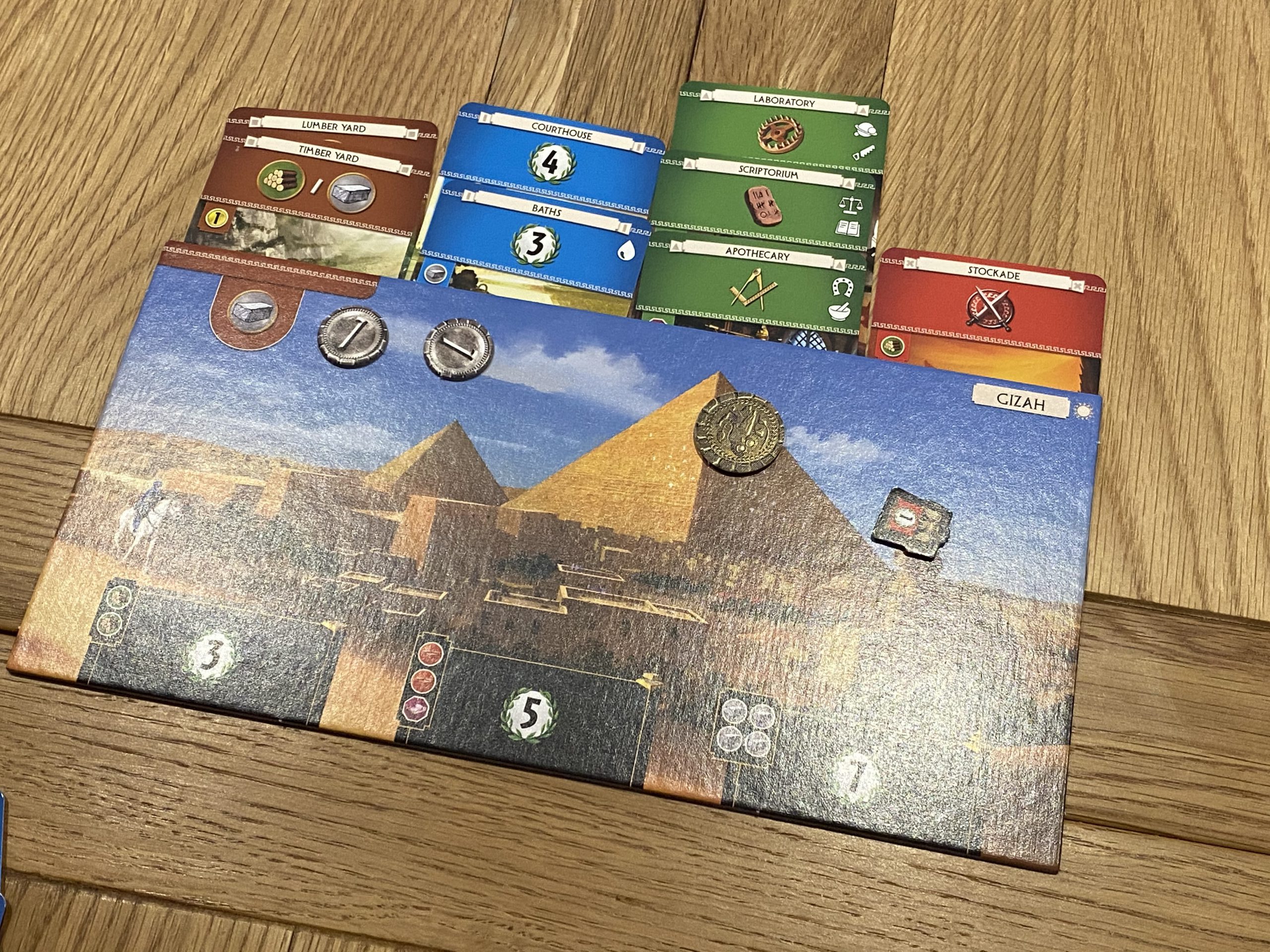 As with the original release, 7 Wonders is a game that offers a lot of the “thrill” of empire building in the ancient world, with none of the overhead of bigger, slower games like Through the Ages. It really feels like you’re creating a timeless wonder, but the whole thing is over and done with in something like half an hour.

The new components really are very lovely across the board, and it’s hard not to be taken in by the shiny, tarot sized cards that come together to form your city. Players who have little experience with board games will likely be drawn into the artwork, whilst the symbols are clean and clear enough for them to follow and understand.

Every game of 7 Wonders gives players enough scope and decision making power to make them feel clever, whilst injecting just enough luck (based on the cards you’re dealt) to disrupt any “go to” strategies. There are few completely perfect ways to play, and therefore 7 Wonders is a game that really levels the playing field for newcomers, casuals and even moderately frequent players. Only those very familiar with its systems and strategies will come into the game with a much higher chance of winning than inexperienced opposition.

I can’t say whether people who own the original game should invest in 7 Wonders Second Edition, but I do think that one version or another should be in almost any game collection. The versatility of the three to seven player count matched with the brief playing time and interesting gameplay is super rare, whilst the new production is top drawer. All in, 7 Wonders is a game that deserves its accolades, and personally, I can’t wait to try the revamped expansions either.

7 Wonders is currently in print, and can be found on Amazon, as well as other outlets