Interestingly, despite the massive pace changes between the two games — Tokyo 42 is a fast-paced game where you jump from rooftop to rooftop, creating or dodging a bullet-hell–style flurries of shots, or more often taking people out from long range with sniper rifles, and Frozen Synapse is a turn-based, tactical affair where both sides plan out troop movements before all planned actions play out simultaneously — they share their inspirations from the Brit gaming scene: Tokyo 42 from Sensible’s Cannon Fodder, DMA/Rockstar’s Grand Theft Auto and Bullfrog’s  Syndicate and Frozen Synapse from Codo Technologies’ Laser Squad Nemesis. 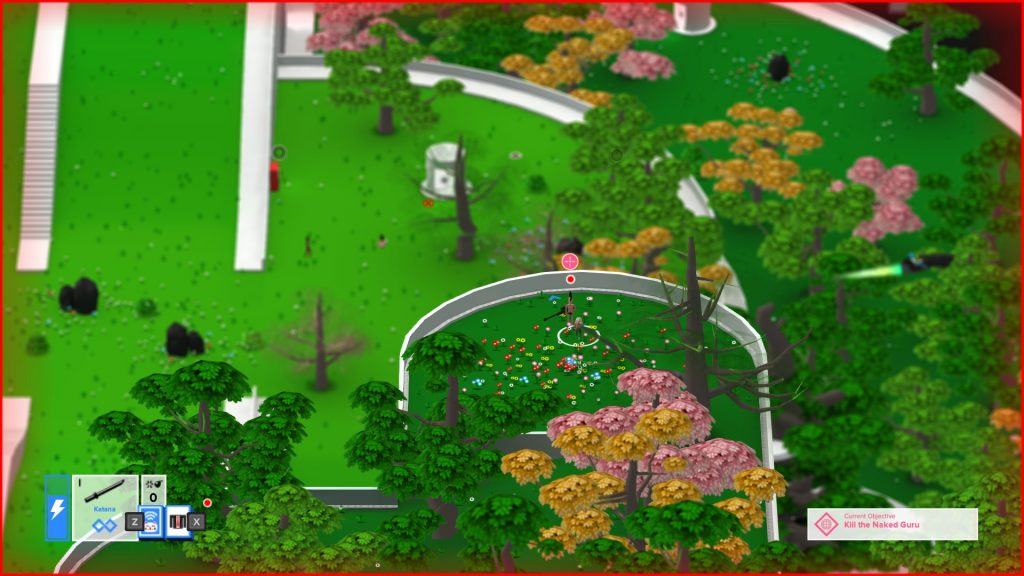 Both are also games about placement and death, albeit their pacing and how they interpret death are completely different from one another.

In Tokyo 42’s colourful, bittersweet skylines there is no permanence to death if you can afford the pills — mega-corporation Nano Med made sure of that. With no end, life has become routine and standard for most. Death still has a value, though. For a start, even if you are medicated, you need to respawn elsewhere — you’ll likely miss your bus or cab in doing so. It’s also something that sticks with you, so death is a deterrent and a show of weakness.

Those interested can read our review of the PC version of Tokyo 42.

You start off framed for the murder-murder of an innocent and so, in that classic way, become the that which you’ve been accused of — a callous assassin — in your mission to find out who framed you and prove that you wouldn’t hurt a fly…

What makes Tokyo 42 a memorable landmark for the year isn’t its story, nor is it the slide from stealth-based katana takedowns to fully-blown bullet-hell and grenade-lobbing chaos. No, it’s the fact that missions are delicately fitted around an outstanding, artistic world which can be viewed from multiple perspectives. If you see a massive tower, there’ll be a mission on the top of it. If you see a giant avatar, it’ll be an objective point in a sprint, or a spawn point for a later target. Everything about the world’s layout feels deliberate, and there’s enough extra stuff to explore the world and play tourist when you’re not feeling up for the tension of the game’s missions.

The missions have an exceptional variety too, with races, rampage challenges and vehicle challenges mixed in among them. My personal favourites were the vehicle challenges, however the few long-range assassination moments which juxtaposed their pace felt like a best test of your abilities and your control of the game’s viewpoint system (the camera can rotate between four locked angles), something which certainly took some getting used to when you first played — but was an integral part of the game’s visual style.