It’s been a long time since we last wrote about Battle Brothers. As a matter of fact it was just over a year ago, when the game hit version 0.7, months ahead of its final release. There was a story laced through the article, tucked among the images — a story of gamblers, merchants, beggars and fishermen fighting against the odds through bandits and greenskins, with scars and fatalities racking up faster than a warfilm, and of friendships forming through the ranks.

For those curious, you can find that preview here.

Before all else, Overhype Studios must be praised for giving just the right amount of depth to its Battle Brothers’ world and character templates — each containing just enough definition that players are left to fill in the gaps of history with their own in-universe experiences and expectations. Compare Jagged Alliance 2 or a BioWare RPG to XCOM or Bastard Bonds and you find a battle between carefully crafted characters who are deep, with rooted lore, but give an experience every player can share, to procedural characters players grow attached to through their lucky victories, the events they find themselves in and their deaths. 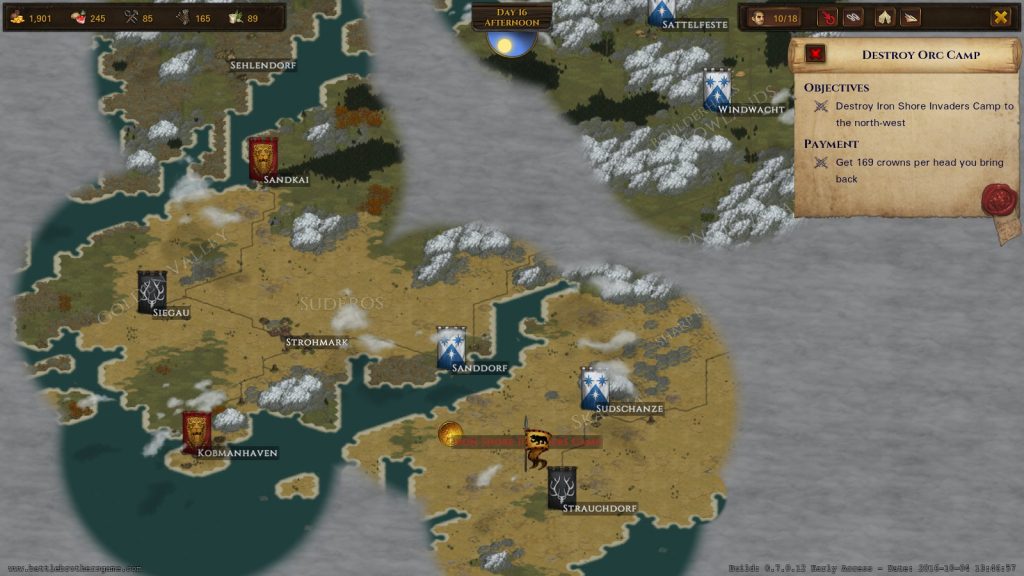 Add to this, then, that the world of Battle Brothers is dark, destitute and deadly, and you form those bonds with your characters even faster than normal. Modern XCOM titles introduce you to their brutal world by killing off a character or two in the tutorial; Battle Brothers wipes a party of twelve down to three, with your character — one of the veterans who were struck down — reduced to a sideline role after narrowly surviving. Your brothers and former warband leader are not as lucky.

Battle Brothers is rarely easy, with its difficult setting only defining how generous your starting situation is. After that, you’re dumped into a procedurally generated map complete with raiders, orcs, goblins, undead and worse. Surviving against the odds are feudal human towns reminiscent of dark age Europe — albeit under siege from light-fantasy creatures. Cities, towns, factions and land formations are all named with a distinct Germanic style, as are the many potential recruits who fill the villages and towns.

Nothing is cheap, and everybody needs to eat. Food, ammunition, repair tools and healing salves are the real resources you’ll be tracking between battles. That and gold for paying the wages — as loyalty and respect are two very different things. As your fighters grow stronger and more specialised, they cost more money to keep around and so you need to take on riskier missions, wandering further from civilisation. It’s a spiralling campaign which the player sets the pace of. Yet, should you lose all but one fighter, you still have room to head back and rebuild. 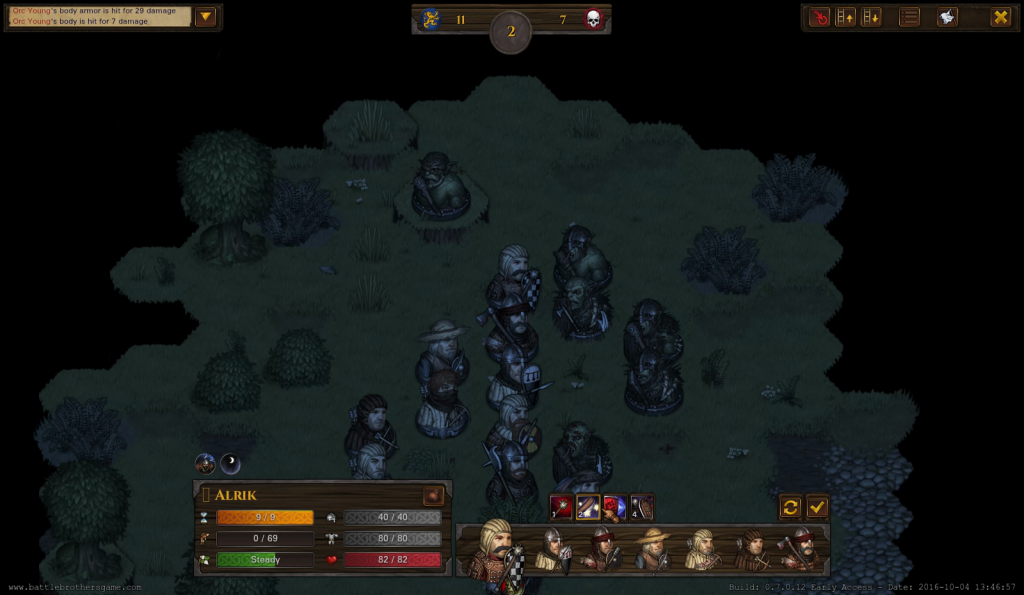 There’s an exception to this. At a certain point in Battle Brothers‘ progression, a great event can take place; two noble houses can go to war, the greenskins can unite and try to push enemies from the area, or — toughest of all — the undead can rise and attempt to crush the living. These are massive, world-altering situations which can lead to towns being erased from the map and changing political landscapes. Human factions and their towns are, even during regular play, locked in economical tugs of war, with the successful journey of trade caravans dictating the wealth of the territories they reach. If raiders start knocking them out, or orcs start burning buildings, or the undead isolate the village, then your job opportunities and recruit pool dry up.

Enough about the mechanics though. That playset gives you ample room to develop your own stories and experiences while leading your merry band around the world. And, while I certainly wish there was an opportunity for new towns to spring up, or more lands to open up, there’s certainly enough in any world for a good 30–35 hours without much repetition. Add those world-shaping events in and you’ll certainly have a lot to do before you decide to retire from mercenary work.

Combat also has a learning curve, one that I still feel I haven’t mastered. Weapons denote the abilities a character can use — so you can give a crippled character who normally excels with polearms a crossbow and shove them at the back, and they’ll still be able to give it a ruddy good go. This opens up a mass of tactical options, as armour and weapon selections are diverse and different enemy types have vastly different tactics and loadouts. Attacking goblins? Forget blunt weapons — get the rough blades out and drop them before they get too close. Taking on orcs? Shatter that armour before going for the kill or you’ll be headless before their front line breaks. 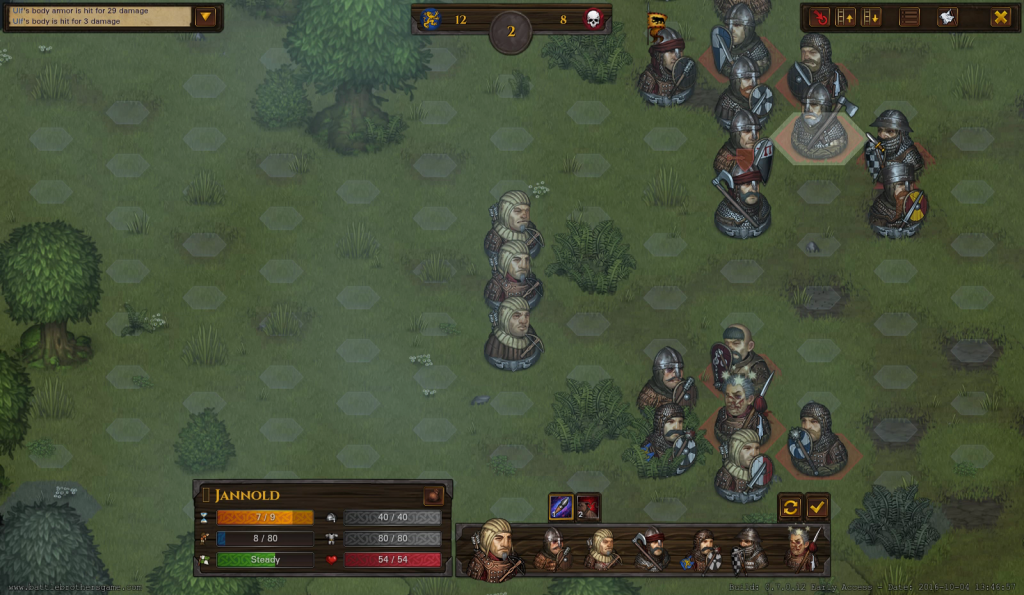 Defence and dodging is also critical — getting up a long shieldwall will save your fighters and if you don’t armour up then a single hit can, and probably will, be fatal.

But, knowing how easy it is to have your ranks and soldiers broken, it becomes easier to grow attached to those who persist. That makes the little filler events which pop when you are on the road, many of which are tied to character histories, stick in the mind more. When two characters keep butting heads over gambling, or short tempers, or when town guards approach and state that one of your men is a wanted criminal… it all makes for amazing, engaging storytelling.

I may still feel a combat novice, and I may sometimes wish for more scale-ability in the world, but Battle Brothers has been one of my most played games this year for a reason. If you enjoy your combat tight, tactical and tense, and your characters fragile, then it is a game which is most definitely worth investigating.