Lewis Carroll’s Alice in Wonderland is perhaps one of the most creatively-used intellectual properties. From twisted comics and video games to star-studded Tim Burton movies, few stones have been left unturned in the retelling of Alice’s hallucinogenic journey. Board games about Alice do exist, but I can’t name another one that is as big, bold, bright and bonkers as Druid City Games’ Wonderland’s War.

Wonderland’s War takes place… at some point after the events of the canon storyline. The Looking Glass has shattered and Alice, the Red Queen, the Mad Hatter, the Cheshire Cat and the Jabberwock are gathered for a Tea Party in order to decide what to do. 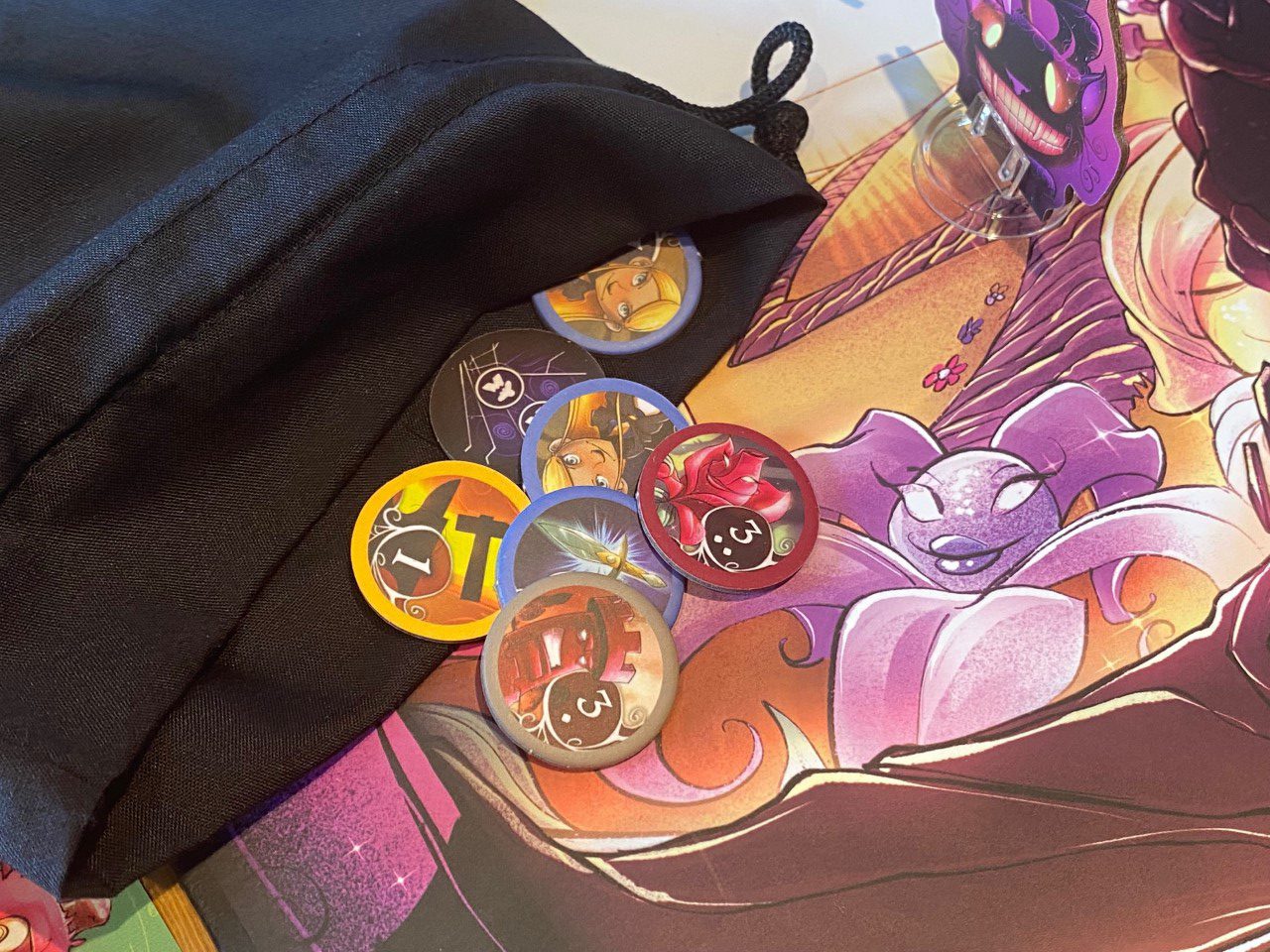 An argument is sure to follow any meeting of such disagreeable characters, and so this becomes the structure of Wonderland’s War. There are three rounds in total, with each comprising of a Tea Party phase and then a battle phase. During the Tea Party, players take turns to move around the table drafting cards —which add followers to the board or allow them to recruit new tools or allies. These components are then used to help determine the battles which feature in the following phase. 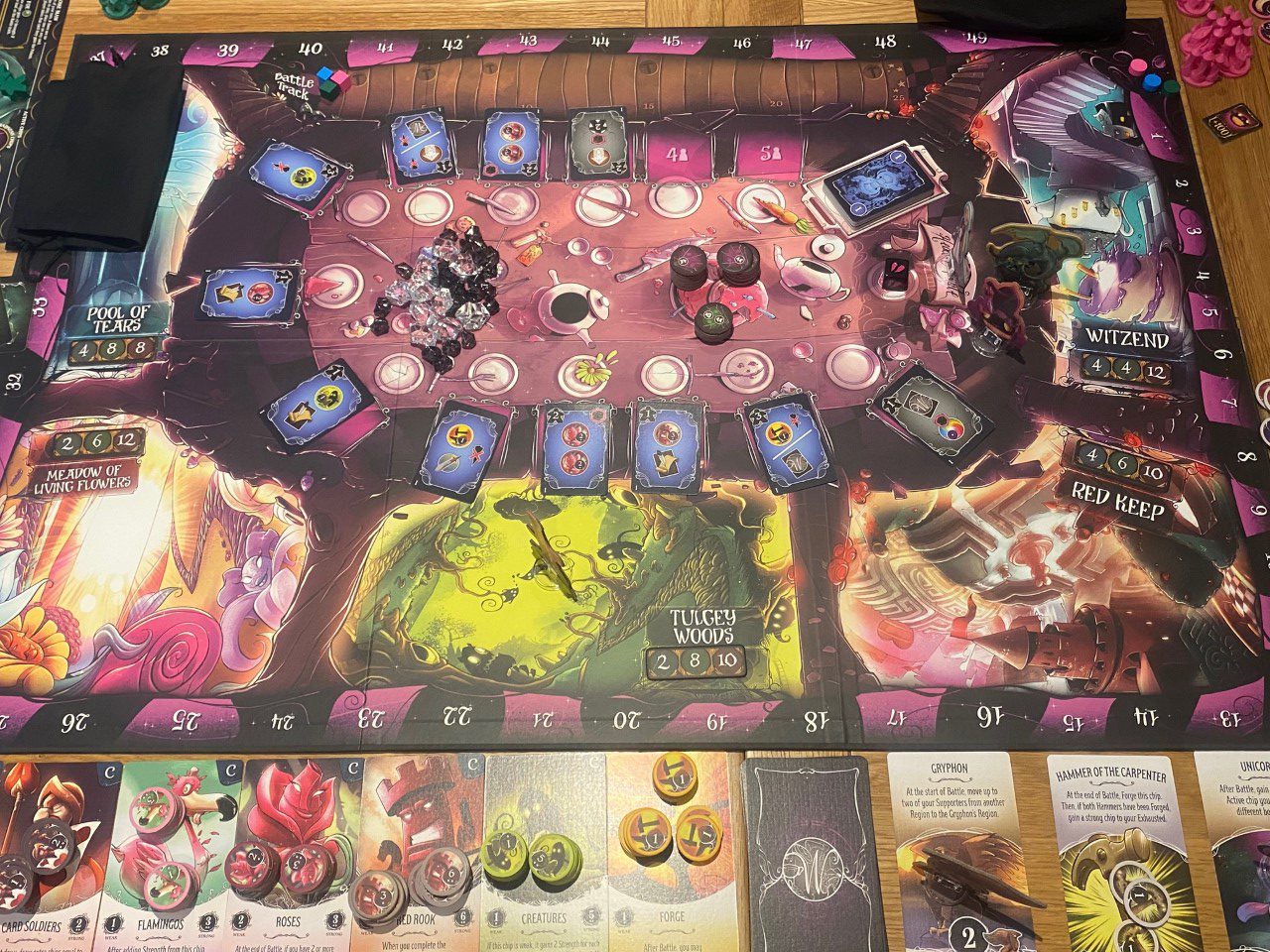 Both of these phases of the game are quite interesting, with nuances of their own that ensure they differ from “normal” examples of their respective genres. The Tea Party phase continues until exactly four cards (or five in a two player game) have been drafted by each player, and drafting is done by the players moving their character standee onto the space (seat at the table) which holds the card they want. If at any point the player has to go past the Head of the Table, then they will take a madness shard —which I’ll explain later.

Any card taken this way is then resolved immediately. Most cards do at least two things, often showing a number of followers in the top corner (meaning the player may place that many of their meeples into one of the areas on the board) and then usually showing one or two more actions. These might be to draw a quest card, choose a new item (which adds chips to their battle bag) or claim a Wonderlandian ally (which often come with a standee.) Some cards allow abilities to be upgraded, or for something unusual to happen —but these are the exception.

When the drafting is done, each of five board spaces (four in a two player game) are then fought over —and this is the part of Wonderland’s War that the game has become known for. Blending elements of traditional area control (visible board presence) and semi-random combat (based on chips drawn from bags) there’s just enough strategy here to satisfy serious gamers, but enough potential for an unexpected outcome that the “feel” of a Wonderland-themed game really does shine through. 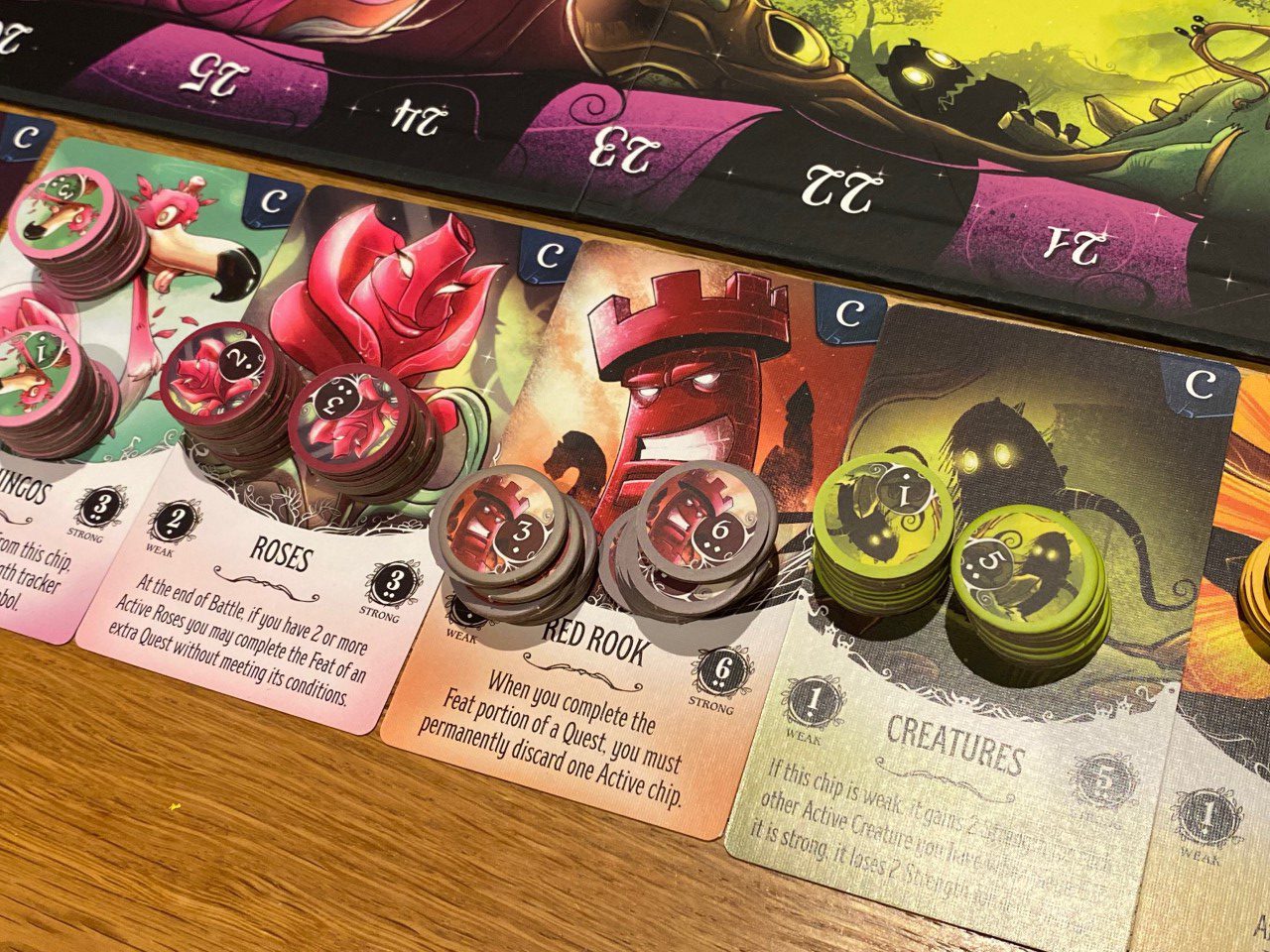 There’s little doubt that the battle phase is the real meat of Wonderland’s War and I do particularly enjoy the way that it ties so directly to the Tea Party phase. During the Tea Party, there are often many options —most of which will be exciting. Will you choose to add the Tweedle brothers to your force? There are two of them, and each adds one strength to the region they are in. But if you do so, you run the risk of having a weaker pool of chips to draw from.

Whichever of these options you choose, you’ll have to consider that each of the five Wonderland regions will score differently (based on a randomised setup) in each of the three rounds that follow. Your followers (meeples) don’t add strength to a region, but they do represent your health there.. Taking only cards that add new allies or chips might give you strength, but only by placing followers will you have staying power in a given region.

When it comes to the actual battle, each player involved will draw one chip at a time, adjusting their strength on the battle track accordingly. For example, if Alice is at strength one in a location (based on her standee) and the Jabberwock is at strength two (because both the Jabberwock standee and one ally are there) then the starting values will be one vs two. Assume both characters have three followers in the battle. If Alice now draws a three-strength chip, her power will increase to four. The Jabberwock draws a two —their strength is now also four. 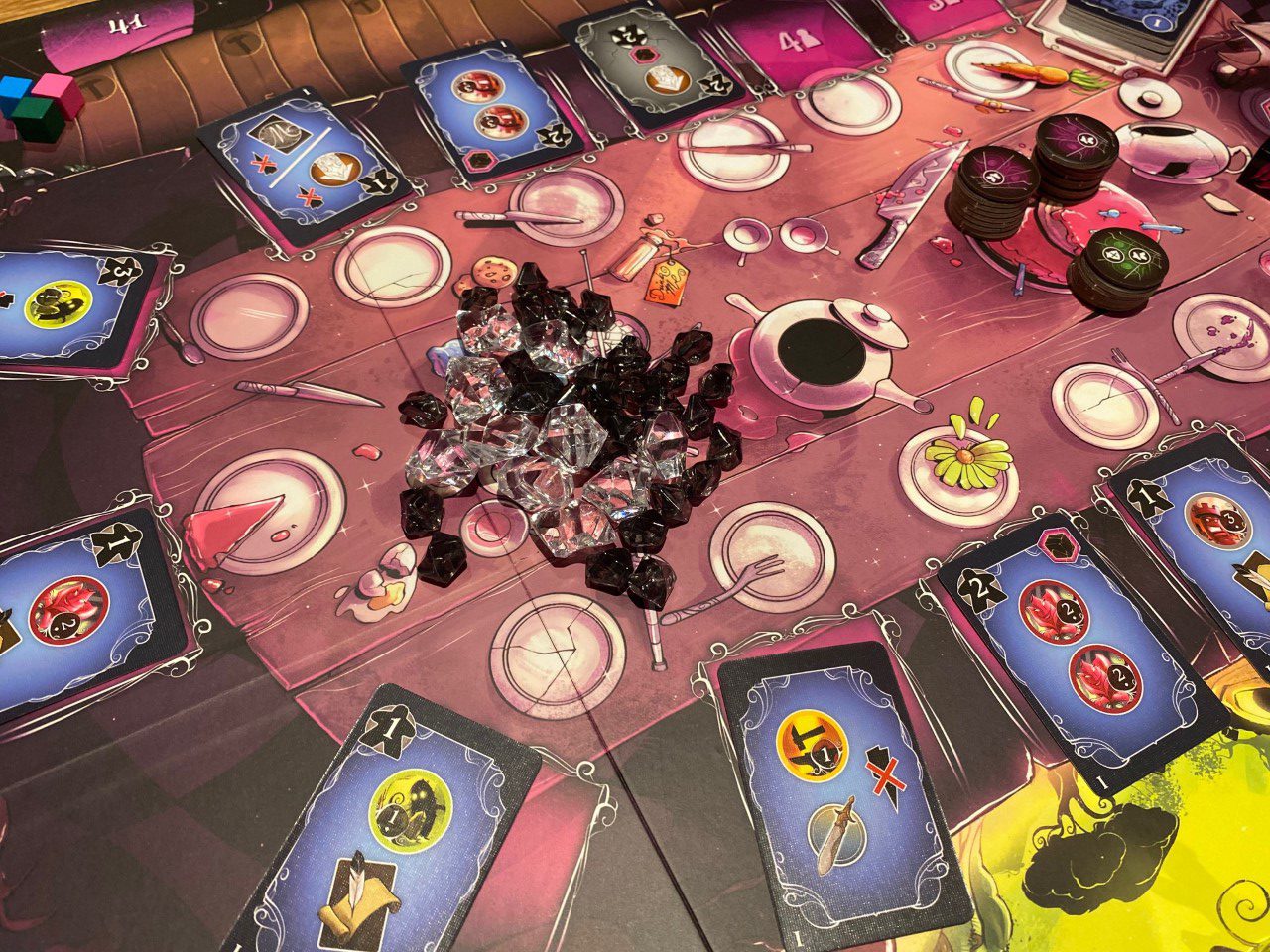 At some point, someone will draw a madness chip —either one off those they began with, or one which is added during the game as a consequence of taking madness shards or due to some other effect. When this happens, that character will lose a follower from that region and if they lose all followers, they effectively bust and are out of the value (no matter what strength they had.) I should also add that many (almost all) chips have minor rules variations in addition to their basic strength —and there are four potential sets of rules to play with, adding variety to every play.

When everyone stops drawing chips (and assuming anyone who bust has already skulked off to lick their wounds) the score is determined. There is always a score for winning the battle in a region, but there may also be points scored here for quest cards —for example just participating, or because you ended the battle with an odd number of strength. Any points scored in this way are added to the board and then the next battle is resolved. In three to five player games, the players who are not competing in the battle can wager on each of the combatants, ensuring that everyone stays in the game at all times.

To me, Wonderland’s War feels both quite long and laborious, but also painfully short —with neither of those things meant in a bad way. Firstly, for all its apparent lightness, Wonderland’s War is a proper game. This is a big, thinky and often intricate game that varies enough from one play to another that it offers a genuine opportunity for players to practice and hone different strategies, without ever becoming programmable. As a slight downside, it is almost always far, far too long at five players —with each Tea Party phase taking what seems like half an hour and each battle phase almost always involving five battles to step through. 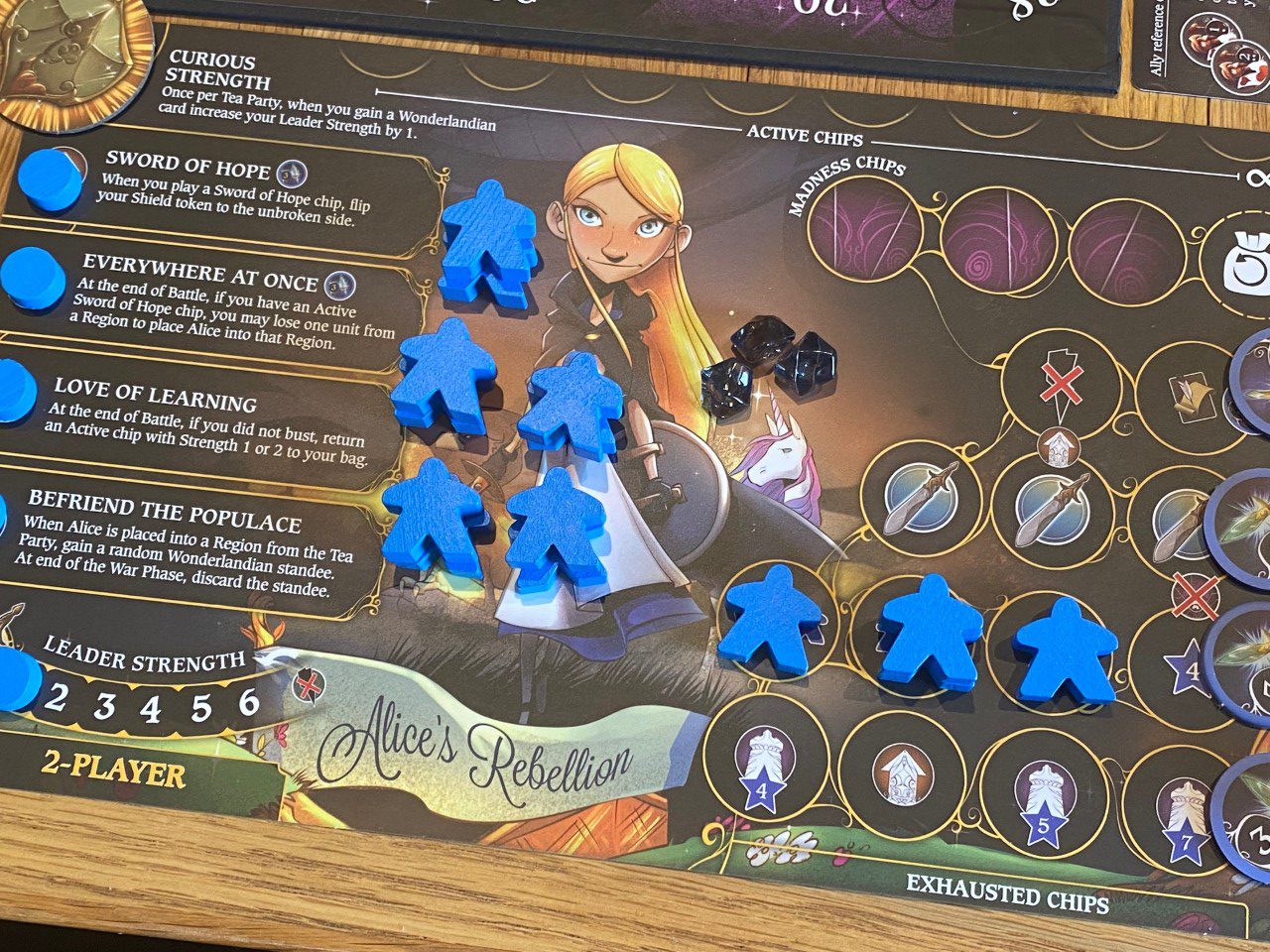 But I just said it was painfully short as well, right? Well, yes. Three scoring rounds leaves little margin for error. Fail to score in the first round and you’re in trouble. Fail to stick with the pack in the second battle phase and you might be too adrift to catch up. Quest cards do a good job of mitigating this if you can get enough of them —and it is very possible for a player who is behind at the beginning of the third Tea Party to catch up and pass a leader if they can complete quests, but there is of course some luck of the draw in that.

With all of that said, Wonderland’s War is so dripping in theme, and it feels so well-suited to the Wonderland theme, that I can’t help but want to keep diving in. The Tea Party feels a bit like watching a group of deranged halfwits plan a battle —positioning troops, gathering their madcap allies and building a literal bag of tricks —and barely managing to control their own mental state. When battle breaks out, the feeling is very much of being on a knifes edge. Fighting with fewer than four or five followers is very risky, and I love the fact that whilst you can stack various things in your favour, the outcome is never assured. 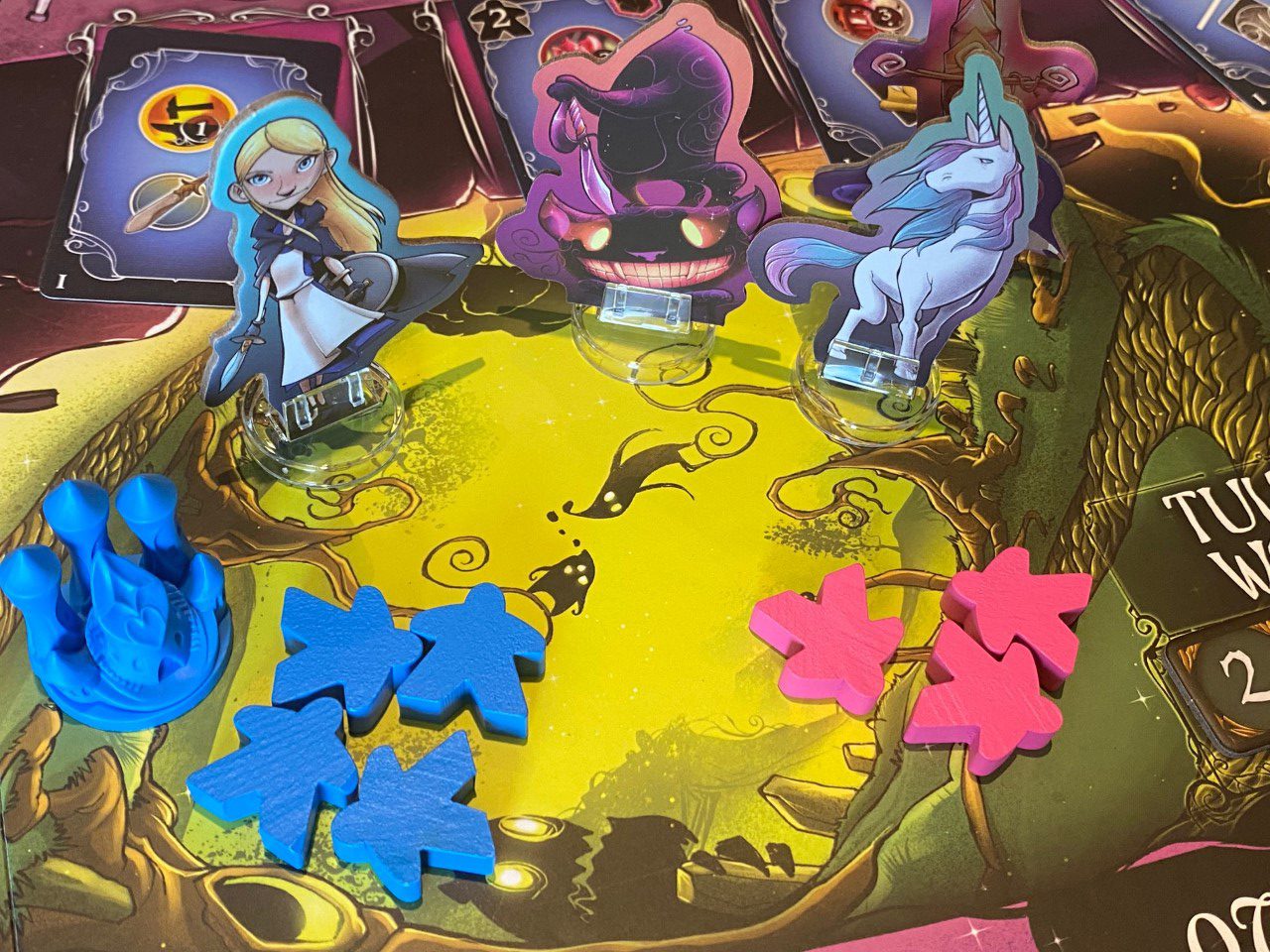 Overall, Wonderland’s War is a gorgeous looking game that captures the theme of Alice in Wonderland and presents it both visually and mechanically extremely well. Yes, it can overstay its welcome slightly (especially if you’re behind and trying to get back) but it remains fun for everyone, and is just about chaotic enough to allow the right kind of surprise from time to time. Well worth a look, and exceptionally good fun.

You can pick up a copy of Wonderland’s War on Amazon.