Whether we’re talking about board or video games, remakes, remasters and reskins are increasingly common, however in most cases, the original version of any game targeted for such treatment will be at least four or five years old. Not so where Lizard Wizard is concerned though, because this particular game is a remake of 2018’s Raccoon Tycoon — which was also released by publisher Forbidden Games.

In both games (bearing in mind I will switch focus entirely to Lizard Wizard as soon as I can) players basically use cards to obtain resources and drive the value of resources in an open stock market — then dump those resources for another resource in order to build a more efficient engine (by investing in cards). 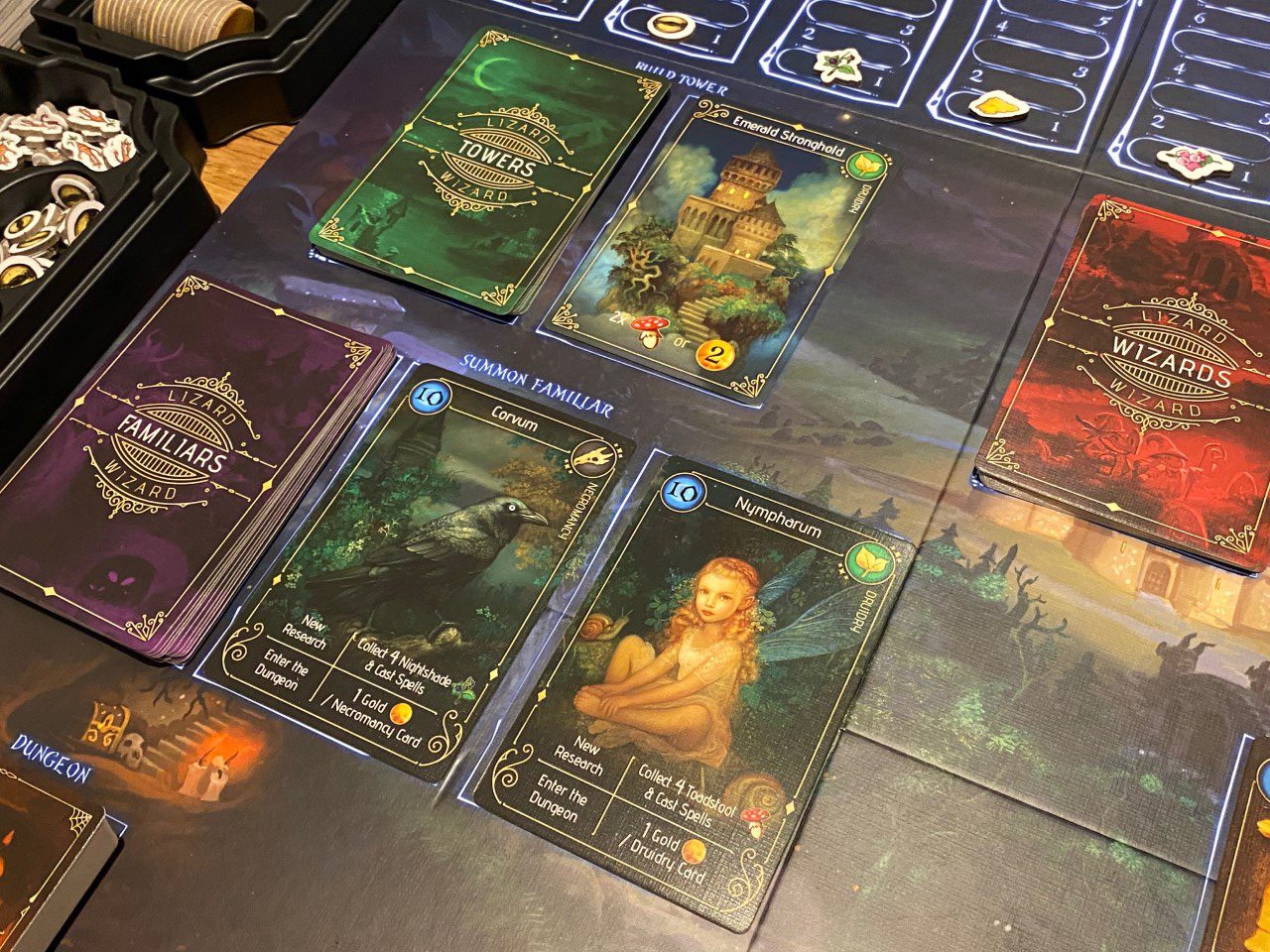 In Raccoon Tycoon, these resources were relatively terrestrial — like wood, or stone — and the players built buildings. In Lizard Wizard the players collect magical ingredients like roots or mushrooms, and then use them to cast spells, summon familiars and wizards (who might be lizards) and buy towers (after conversion of the resources). Both games work in very similar ways up until this point (albeit with an entirely different skin) and if that were it, this review would focus a lot more on the aesthetic differences between the two.

As it stands though, Lizard Wizard differentiates itself by layering in a couple of additional mechanics, the most significant of which is the inclusion of a dungeon exploration mechanic. Whereas the other actions in Lizard Wizard are pretty much within the player’s control, the dungeon exploration aspect is very random and… arguably… not very rewarding, but I’ll come to that later. 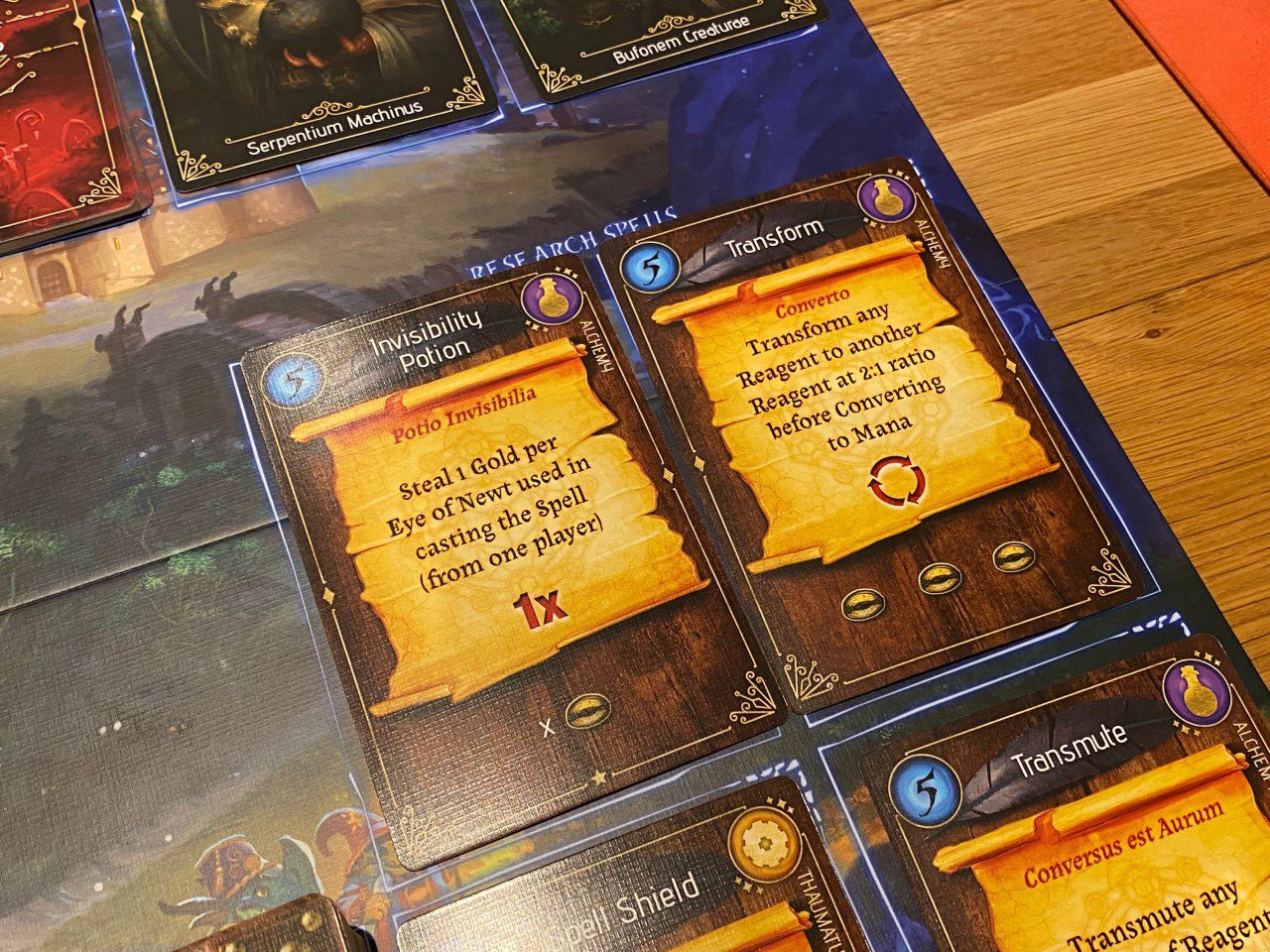 Whilst it is undoubtedly subjective as to which version of this undoubtedly similar game you’ll prefer aesthetically, my preference is for the newer Lizard Wizard. It has a very similar style, but there’s something a bit bigger, bolder and more extravagant about this newer edition — which may simply be my preference, or it might because it has a really lovely Gametrayz insert. Whatever.

In gameplay terms, Lizard Wizard is mostly very enjoyable. Each turn a player will complete one of six actions, the first of which is the most common. The player will play one of the cards in their hand, which will in turn allow them to draw three or four resources from a selection of six — as shown on the top half of the card. 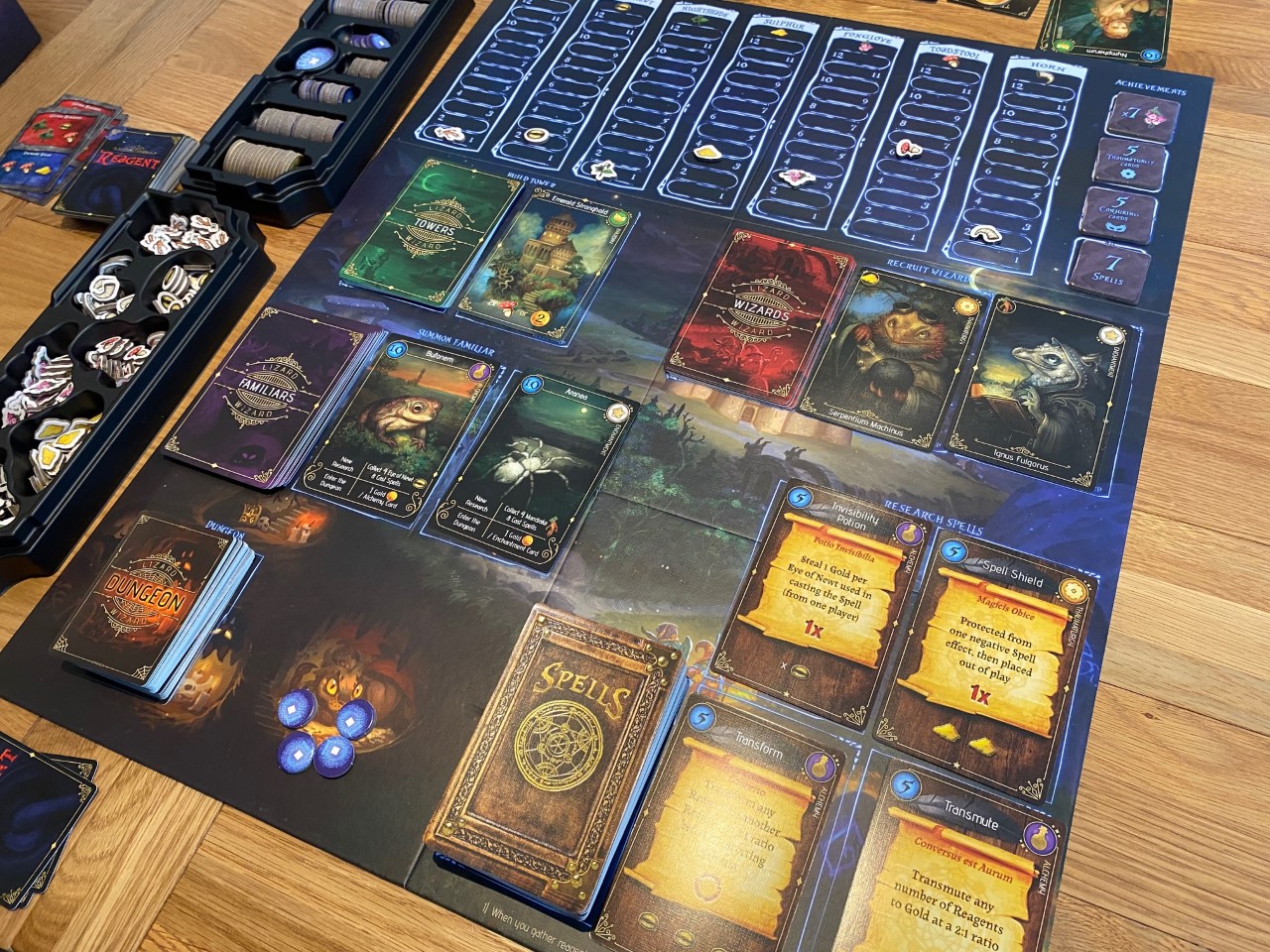 On the bottom half there are generally two or three resources that will then go up in value, as represented by trackers on the board. Sometimes, a player may follow this up by casting a spell (each of which has a fairly interesting effect) by spending the resources shown on the spell as long as they have researched it already.

On some turns, the player might choose to convert the resources they have into mana — which is done at a rate of one token, multiplied by the current value of that token, multiplied by the number of tokens being turned in. The total value is then returned to the player as mana — a generic blue resource that is used to bid for wizards and to learn spells (which can then be cast either now or later). 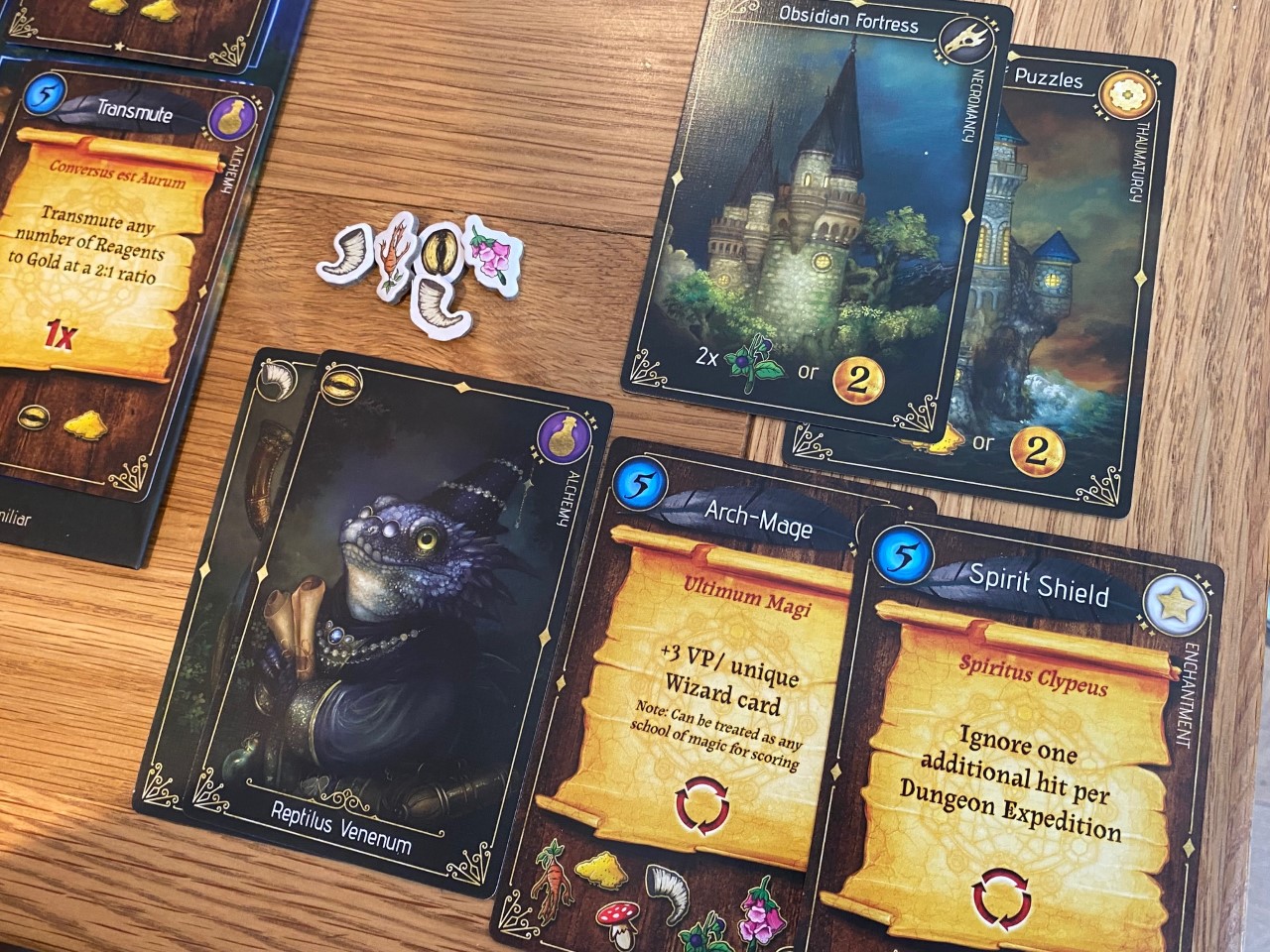 When bidding for a wizard, the active player must bid an amount of mana that they wish to pay, and each other player can then offer to outbid them. If the current player fails to win this auction, they may then choose to take a different action. Of the remaining actions, the player can outright just buy a Tower (for gold or resources), or they can buy a familiar… and this is where a few things come unhinged in Lizard Wizard in a way that they never did in Raccoon Tycoon.

In a nutshell, taking a familiar triggers almost like a sub game of new actions to choose from — four, in fact. These including scoring gold based on sets of cards held (from a specific school of magic), gathering resources, clearing the spell options available or delving into the dungeon. The first three are straightforward and feel a lot like they were included to try and deal with edge cases that came about during feedback for Raccoon Tycoon. They give options, and mostly fixes for situations that might arise in certain situations. 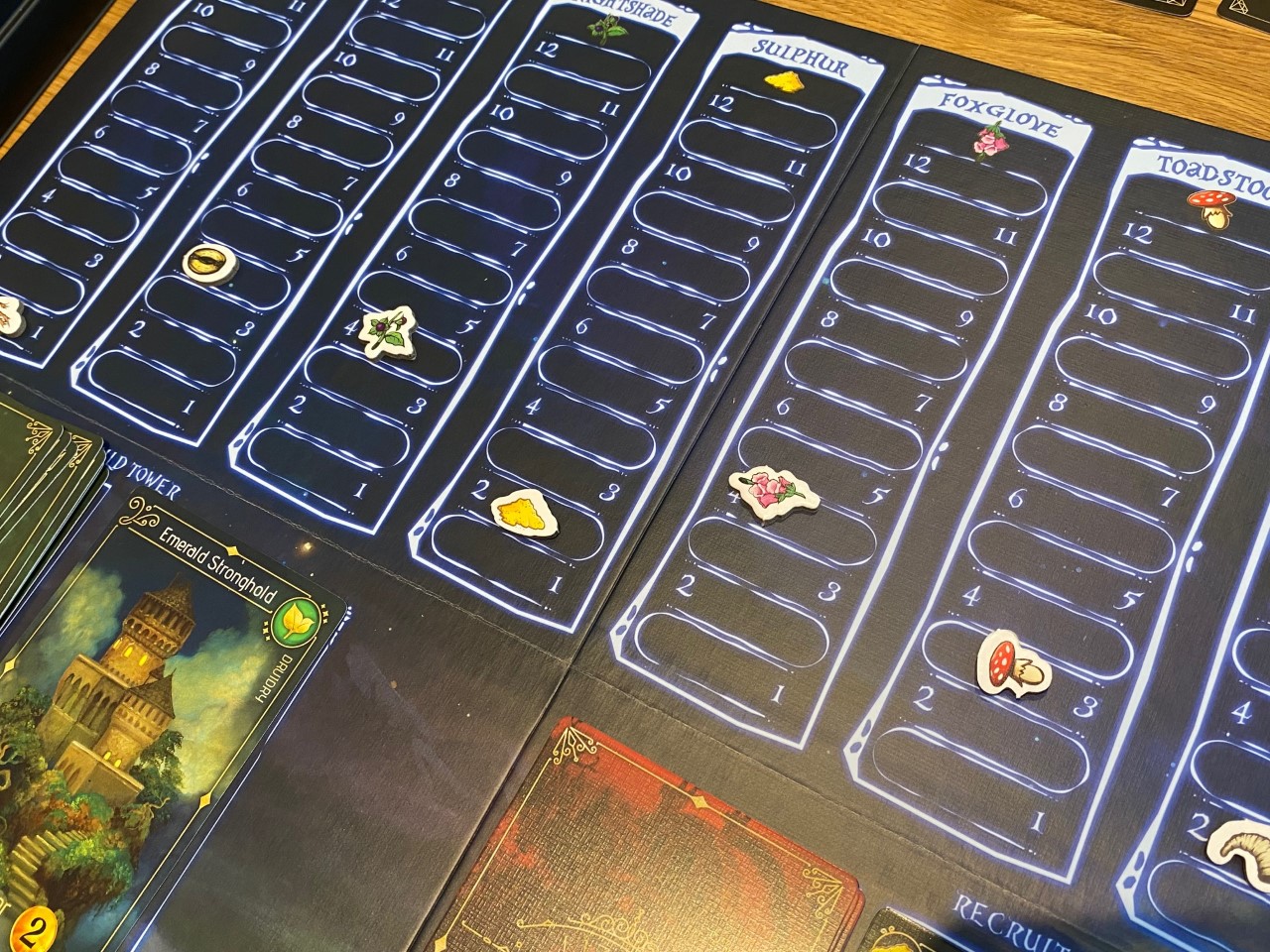 Diving into the dungeon, however, feels oddly irreverent in context of the rest of the game. The player simply draws cards from the deck until either they choose to stop, or until they draw two monster cards. If they draw anything other than monster cards and don’t bust, they keep it — most often receiving gold (another powerful resource) as a result. The problem is that it always feels extremely likely that you’ll get two monster cards before you actually get a worthwhile payoff — that is unless you have a spell that can mitigate it by adding an extra hit, or allowing a redraw.

The real problem I had with Lizard Wizard was that the familiar action tended to break up the flow. Not for ages, and not in any awful way, but for the majority of games we played (among family and casual gaming friends) the familiar use case just wasn’t there. No one felt strongly enough about the first three actions to use them, and when we delved into the dungeon we almost always felt that we’d traded a whole turn for a risky chance at a less than brilliant payday. It’s a shame that the only new mechanic added to the game wasn’t a bit more exciting. 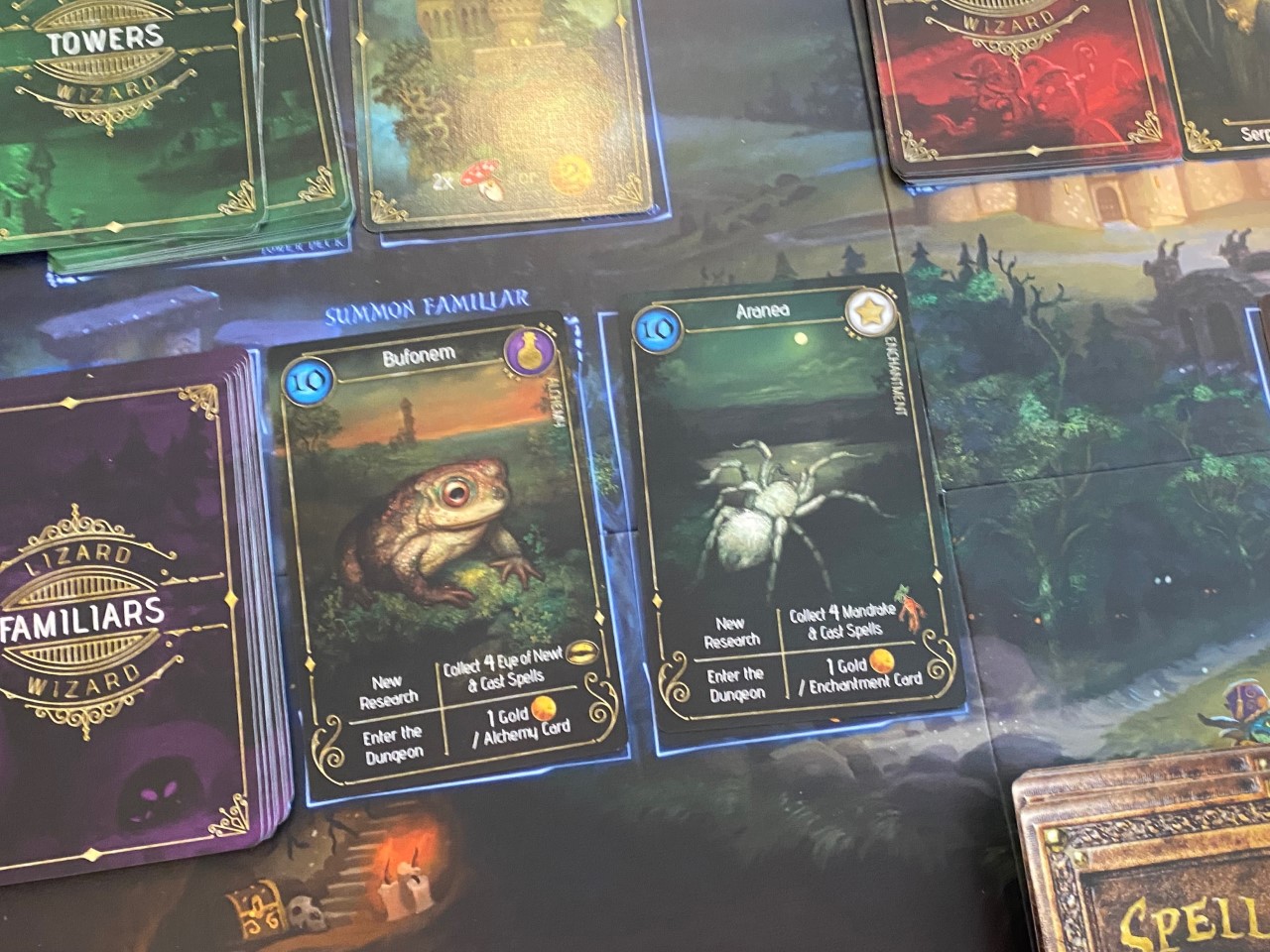 As a pure reskin of Racoon Tycoon, I do actually prefer Lizard Wizard. As I said earlier, the aesthetic appeals to me more, but over and above that I found the resources, mana, wizards, towers and familiars concept a lot more fun and relatable. The set collection aspect (which is a key part of scoring) relies on matching wizards and towers in the same schools, and again this just makes sense and appeals to my love of fantasy genre games.

Lizard Wizard is a decent game that looks absolutely fantastic and has genuinely exceptional build quality. I do feel that less is more though in respect to the new mechanics introduced by the familiars, especially the dungeon, and on balance I think we preferred to play the game without it. When excluding those components from the game, Lizard Wizard remains perfectly playable and still has a great variety of spells and other fun things to do that aren’t in the original. If you’re choosing between the two then, Lizard Wizard is still the one to go for in my opinion.

You can find a copy of Wizard Lizard at your friendly local game shop, or you can search for the lowest price online at BoardGamePrices.