In Viticulture, a medium-heavy Eurogame from Stonemaier Games, two to six players take on the role of vintners as they strive to plant their vines, set up their wine-making empire and establish their business as a renowned producer of the finest vintage. Although relatively simple to play compared to some of its peers and draped in the highly appealing theme of winemaking, Viticulture’s simple structure belies a complex engine-building mechanic which is off-putting for some and deeply rewarding for others, so read on to find out more about it.

Viticulture is not a new game, having first been released in 2013, but like the fine wines that it encourages players to produce, it has been pruned and manicured over a number of years to create the very fine drop that I’m reviewing today, known as the Essential Edition. The differences between this version and the original are subtle, but nonetheless, new players should really aim for the Essential Edition. It includes Grande Workers and Fields from the outset, whereas the original game only introduced those features via a separate expansion called Tuscany. 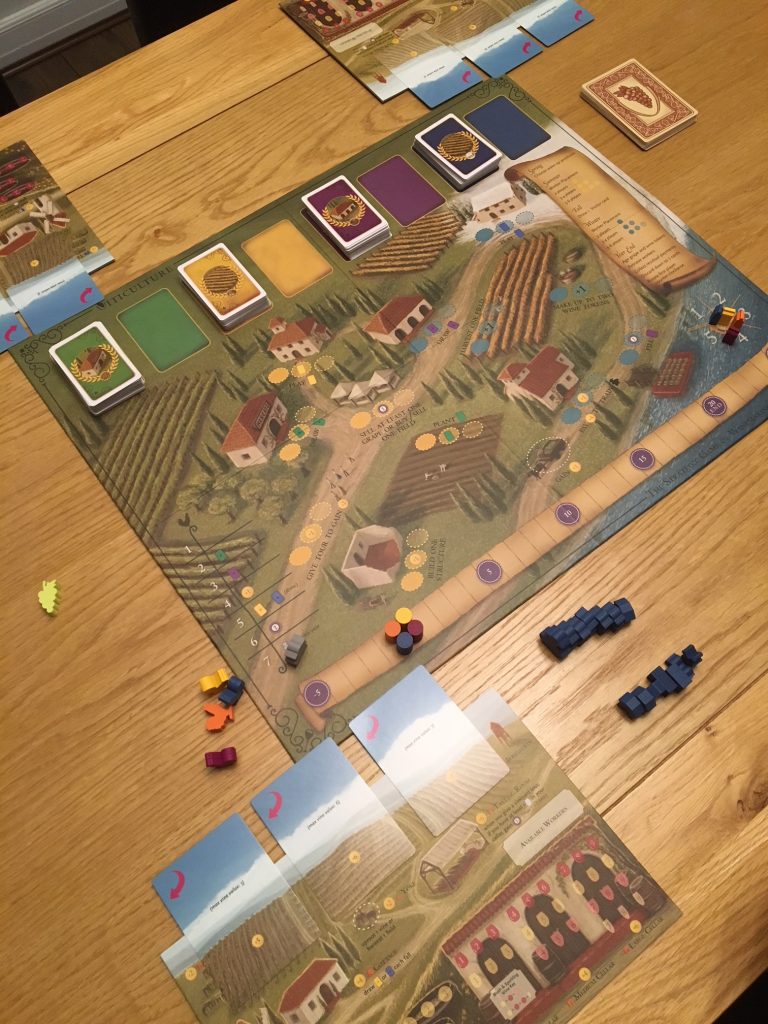 What are Grande Workers? What are Fields? Ha! Never mind that for now — instead, let me attempt to explain the rules of this fairly complicated game in just two paragraphs. Viticulture shines a light on the entire spectrum of wine-making activities, beginning with a choice of benefactors (a mama and papa) who provide players with starting workers, structures and cards such as vines or visitors, right through to shipping finished wine orders to wealthy buyers — you’ll be doing it all. How, you ask? Well, you place little wooden workers on the board during alternating seasons (just summer and winter) and use them to perform all the laborious activities whilst you hobnob with the bigwigs.

But really, how? Okay, no problem, here goes:

Before anything else, players decide who goes first by using the wake up track — get your workers out of bed earlier and you get to place them on the main board before anyone else, which is good because space on each activity is limited depending on the number of players. Get up later, though, and you’ll gain access to other benefits such as vine or worker cards. Get out of bed last and you’ll gain access to a bonus worker for that year only. Yes, yes, but why do you care? Well, you care because placing workers on the board is what Viticulture is all about. 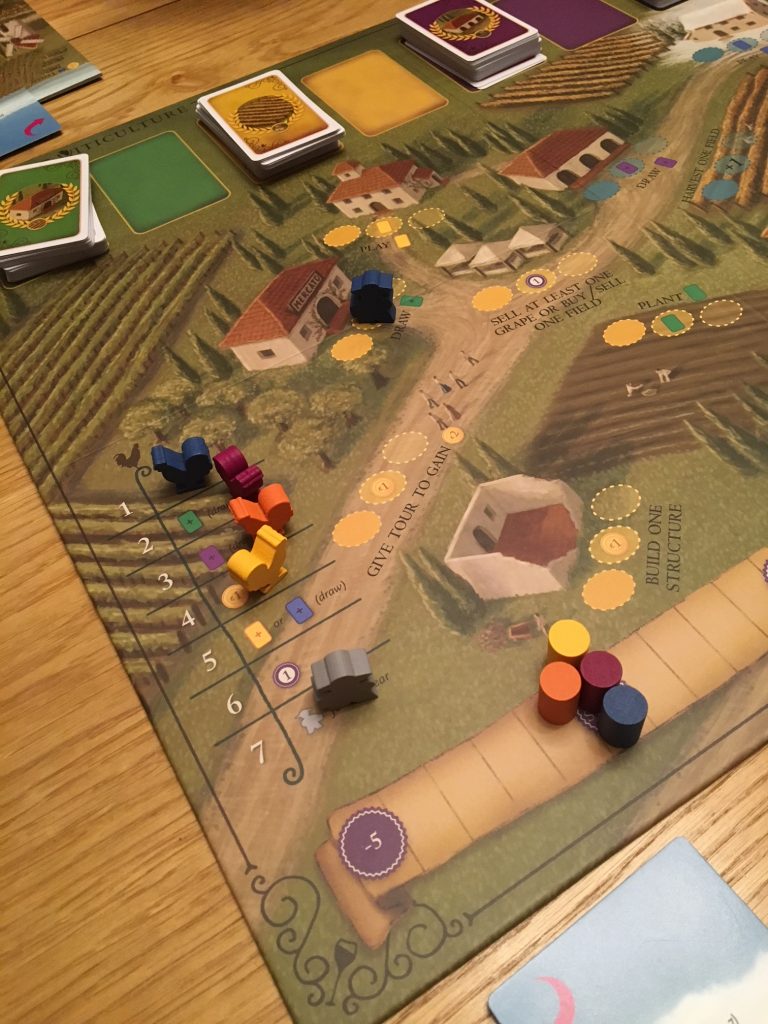 Whilst I appreciate that my two paragraphs are up, I’m going to carry on telling you about how to play the game, because I think it’s important. Maybe one day, I’ll include a lot less conjecture, which might enable a more succinct explanation, but I definitely think I need to carry on for now. Let’s pretend you place your wake up cockerel on space number two, which means you draw a vine card. That’s great, but if your opponent places their cockerel on space one (which doesn’t give a bonus) then they can go first and in a two-player game, if they then place a worker on the planting space, you’ll be frozen out. If that happens, you could place your worker on the “obtain a new vine” or the “play a visitor card” space, or you might even sell one of your fields or run a tour of your vineyard to make money.

Actually though, in this example, you’ll want to play your vine. Mainly because come winter, you’ll want to harvest grapes and in turn, make wine. If you can’t do that, you can’t really win in Viticulture. This, friends, is where the Grande Worker I swerved explaining earlier comes into his own, because the Grande Worker (unlike a normal worker) can go on spaces that have already been occupied. In this case, you could use your one and only Grande Worker to plant your vine, but remember, your, erm, second-placed cockerel means that you’ll be playing behind your opponent for the rest of the year and you only have one set of workers to keep you going through both summer and winter. This means that you might never be able to catch up with wine production, so perhaps you should change tack for this year and build infrastructure for the next? Or attract visitors? 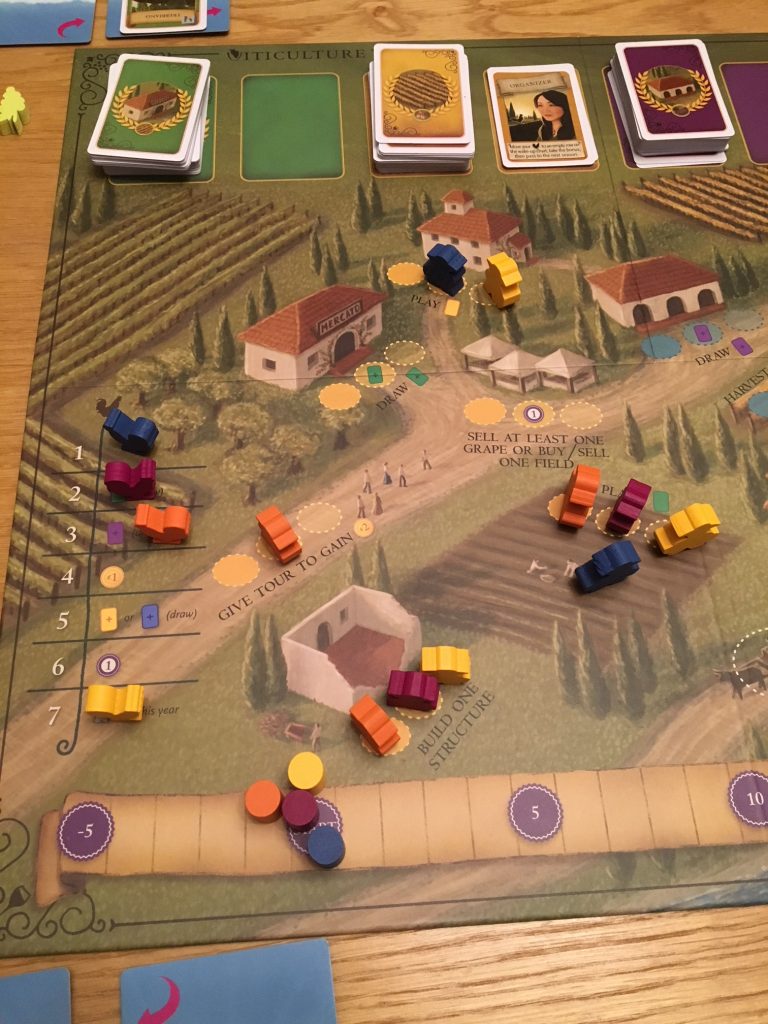 Now imagine this kind of quandary but with six players. With that count, each action space can take up to three workers, but that could mean three are left wanting. Now fast forward to a position where your personal player card has one or two vines on each field, you have a few grapes in your crushing vats and you’ve even got a few wines ready for shipment. What do you do now that competition for planting isn’t as high? Do you a) build a medium or large cellar to accommodate better wines (including specialised rosé and sparkling varieties) or b) double down on vines to make the next crop more robust? Well if you can’t store better wine, you might as well not produce it, but if you can produce it, why bother if you don’t have a wine order to meet that will maximise victory point value and residual payments, which is how Viticulture demonstrates the spread of your fame and expertise?

I hope, by now, you’re getting some idea of how complex the decision making in Viticulture can be, and that, my friends, is why I absolutely love it. It’s also why my fiancée hates it with a passion which burns as hot as the fire of Mount Doom. Two or three other people I played with came to this same conclusion, such was their revulsion at having to think about a game across such a broad spectrum and in an environment which is (no matter what anyone says) actually quite hostile. Sometimes, you’ll put workers down just to stop someone else doing something, which in a game about such complex engines as Viticulture, can be devastating. Where I find joy in the diversity of options and ways to win, some people find confusion and frustration, which I can actually understand. 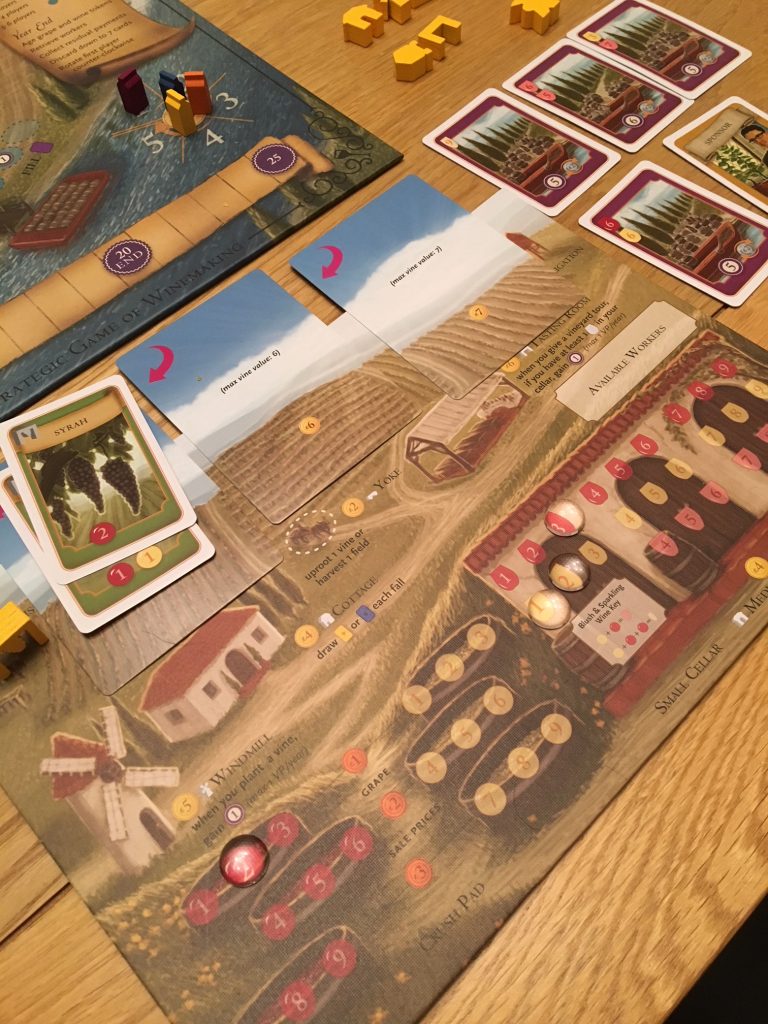 In the first game we played (there were four of us) I ended up controlling two of the vineyards after a player quit, whilst a dedicated friend ended up in the same position on the opposite side of the board. Thankfully, we had fun playing dual-empire Viticulture whilst everyone else got drunk. In other games, I found players more than happy to engage with the ebb and flow of success and failure, because if nothing else, Viticulture is fair. The placement of wake-up cockerels is decided by a traditional “clockwise around the table” mechanism which is denoted by a grape token, so whilst you might be off to a slower start, you’ll always be able to choose the slot you want at least a few times, whether that is first or last. It is analysis paralysis that seems to be the problem in Viticulture, especially for players not used to complex Eurogames.

I have to say, the experience of turning off players to the point that they quit was not good for me. I don’t play board games to make people feel as if they can’t continue or don’t want to play, but upon reflection, I think the error was all mine. I made the cardinal sin of assuming that Viticulture‘s simple worker placement mechanic and logical flow of activities (from planting grapes to fulfillment of orders) would simply take care of itself, but it just doesn’t. It needs to be cajoled and thought about at a level of detail I never imagined it would, and if it weren’t for that Grande Worker…. well, all I can say is that I’m glad Uwe Rosenburg suggested to Jamey Stegmaier that it be introduced into the base game and not just the expansion. Without it, I think I would have lost my friends two or three years earlier.

Now I know this might sound a bit negative, but there is a flip side to this coin. The flip side, as I hinted at fairly directly earlier, is that strictly speaking, Viticulture is brilliant. It’s brilliant because you’ll never roll a single dice and whilst some visitors, vines or wine order cards are better or at least more timely than others, nothing really is left to chance here. It’s all down to your decision making prowess and your ability to out-think and outmaneuver your friends. It’s hard and it’s often much less friendly than I imagine wine making should be, but it’s brilliant all the same.

I also love the power of its engine-building system. It’s almost stupidly complex — I don’t think it needs the introduction of blush or sparkling wine and I don’t see why there are so many new buildings, but the fact that they are here and they provide a barrier to the next amazing thing makes Viticulture so much more interesting for players willing to spend the time and effort investing in the infrastructure to get there and, ultimately, to make astonishing wine. Somehow, it feels almost more authentic to me as a result of this extra strife, but it’s possible that I think that because I’m just a massive dickhead.

And that, really, is that. Clearly, I love Viticulture and I want to recommend it highly to everyone, but I know (from my own bitter experience) that it isn’t a game that everyone wants to play. Yes, you will make wine — but it doesn’t come easy. You can see the path to where you want to be and there are just four steps to get there (pick a vine, plant it, harvest it, make the mushed grapes into wine) but Viticulture is almost never that simple. You may need trellis to plant the grape you have, you might miss the chance to plant, you might lack the workers to make wine come winter.

Viticulture requires constant thought and so it doesn’t offer the relaxing, refreshing experience that its theme suggests it might. That doesn’t matter to me and I hope it doesn’t matter to you, but be mindful of the audience you’re playing with, as always. Assuming you’ve been reading this review properly, then, you’ll probably have realised that I do very much recommend Viticulture, but only if it sounds like the kind of game your friends will want to play, too.

A copy of Viticulture was provided for review purposes and can be purchased via 365 Games or through one of the shops found in this handy Store Locator.