Veilwraith is another solo epic from Hall or Nothing

When I last reviewed a game from designer Tristan Hall, I remember suggesting that Gloom of Kilforth was a must have for fans of solo games. Since then, Covid-19 has prevented multiplayer and face to face gaming in almost all its forms, and solo gaming has become a lot more popular — Tristan Hall’s answer? Veilwraith.

Unlike Gloom, which can be played either solo or cooperatively, Veilwraith is a completely solo experience. It’s also a lot less grandiose, and the first thing that struck me as I unpacked the contents was just how lean Veilwraith is in comparison to both Gloom of Kilforth and its sequel, Shadows of Kilforth. 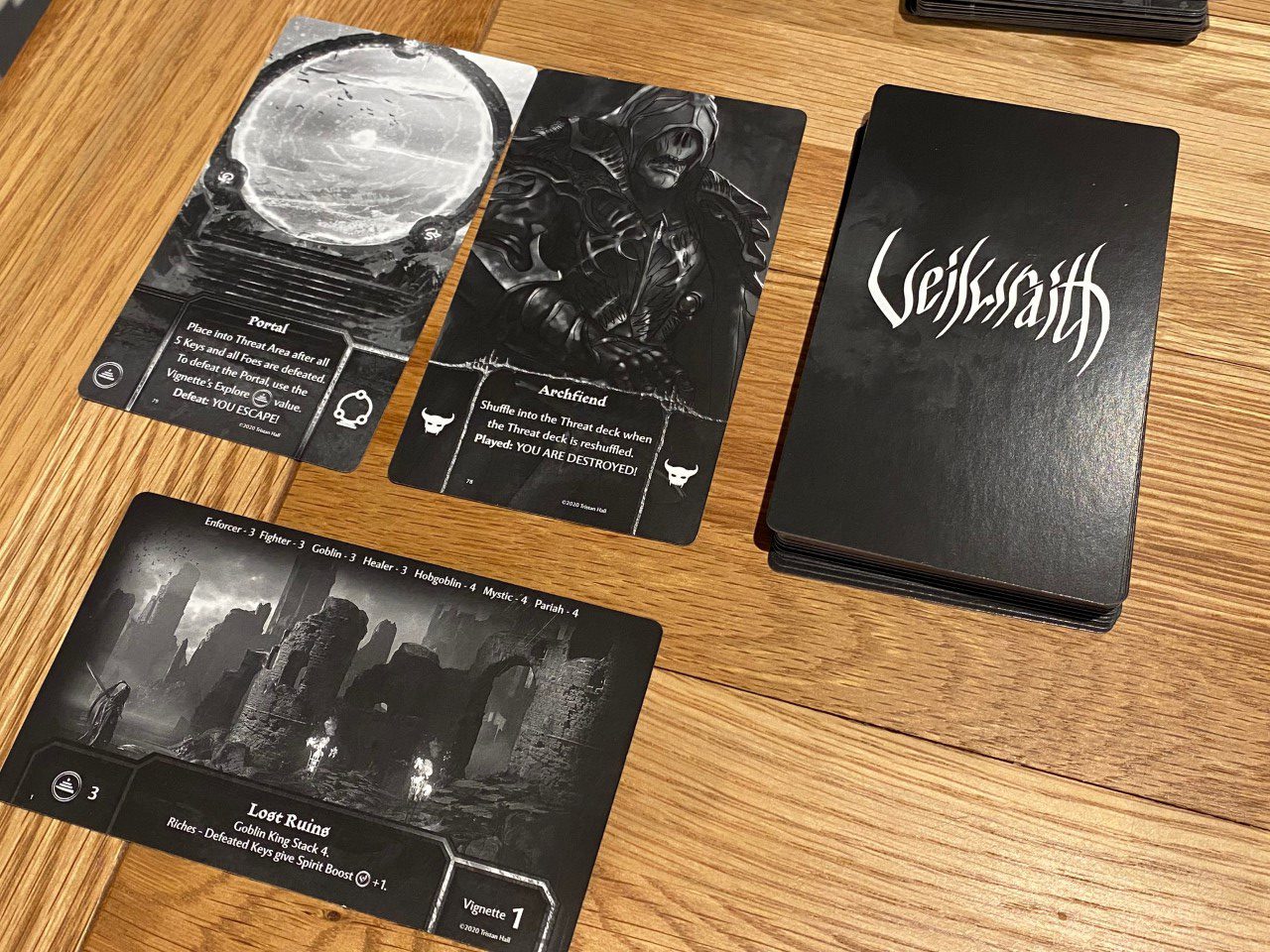 This starkness is definitely accentuated by the artwork in Veilwraith, which is presented in simple black and white. As he always does, Tristan Hall commits fully to his theme here, with the titular Veilwraith being a character who seemingly drifts across the veil between life and death, interacting with both as needed to fulfill his ultimate objective.

Whilst I personally find the black and white artwork here to be slightly less appealing than the almost impossible to match fine art of Gloom of Kilforth or 1066: Tears to Many Mothers, I don’t dislike the style, and I definitely appreciate the commitment to going in an unusual direction. In terms of gameplay, Veilwraith’s focus on solo play also gives it a narrower scope than the Kilforth games, giving it an almost solitaire-like focus. 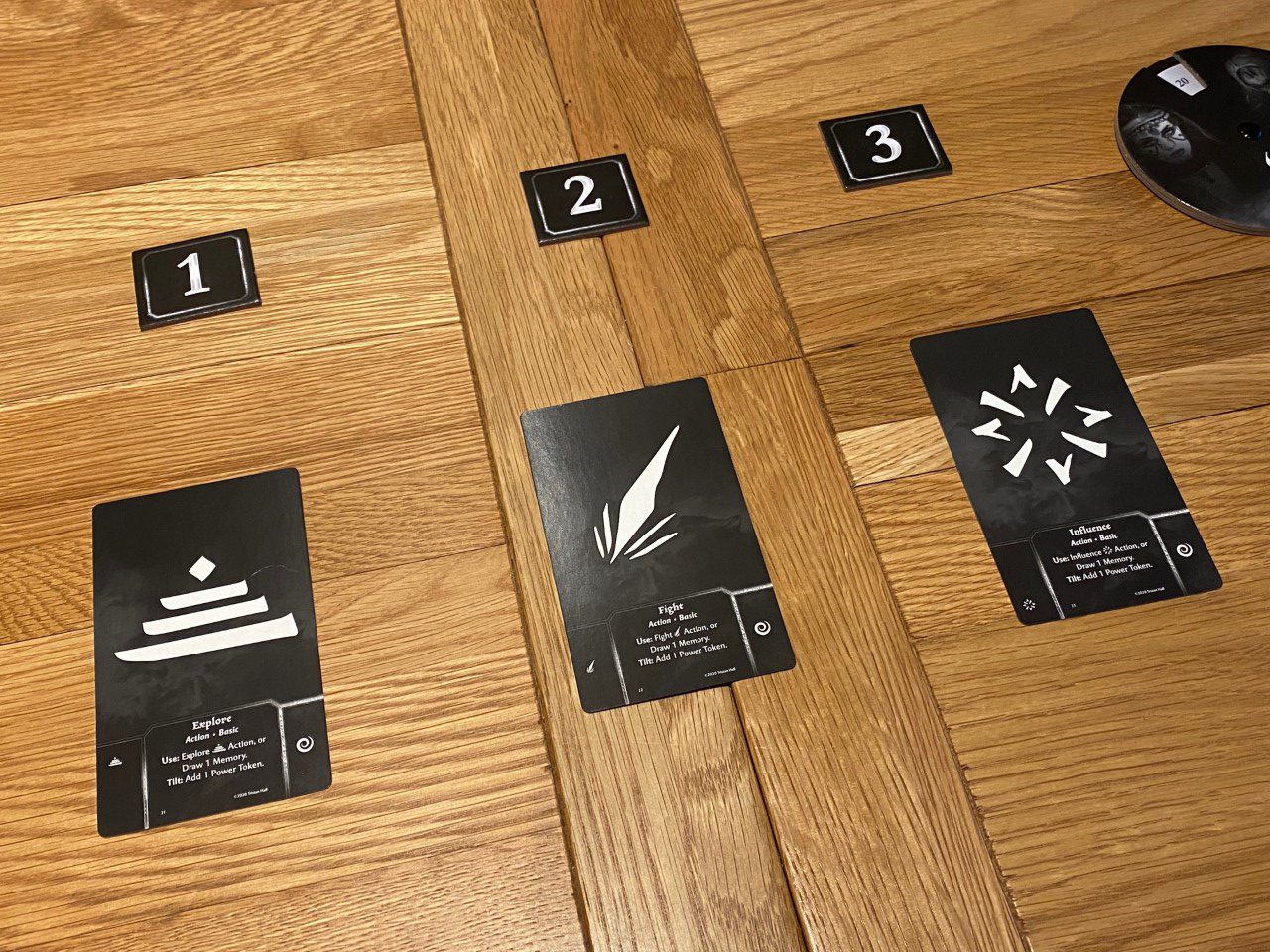 Let me explain this for a moment — in Kilforth, the player (or players) were effectively playing the roles of adventurers — meeting foes and NPC’s, interacting with them, completing quests and advancing their skills. Everything in those games happens within the one playthrough and characters do not progress from one game to the next (usually), but you’re also free to leave areas to come back later, or to generally meander in a more RPG-like way.

In Veilwraith, the wraith himself begins the game quite weak, and only gains the opportunity to add better cards to their deck after a successful game. The decision space is much smaller, with one of three actions being played for its action, and another being tilted for a minor power increase later, on each turn. 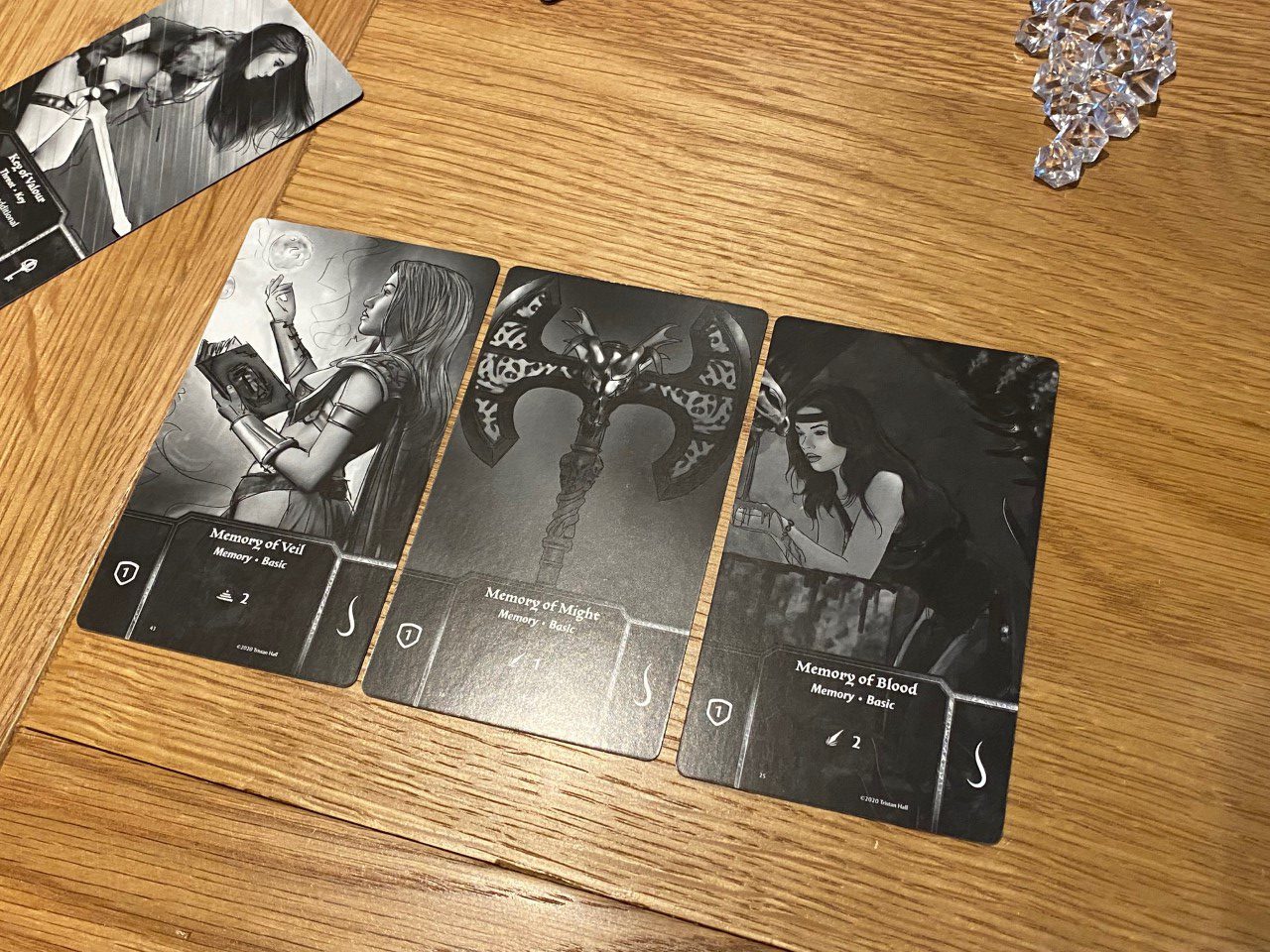 Threats come thick and fast in Veilwraith and my comparison to Solitaire comes from the fact that you really need to make the right decision almost every turn, and even if you do, you’ll still sometimes lose anyway. This makes Veilwraith much more about decision optimisation than either Kilforth game, which I think still have big decisions, but there’s a much more “open” roleplaying aspect to those games.

To help me explain what you’ll be doing in Veilwraith, let me use a quick example. The three actions our wraith has access to are Explore, Fight and Influence. On each turn, the wraith can turn one of these ninety degrees to use it for the power level under which it currently resides (one, two or three), discarding any cards they have in hand to bolster it, and discarding any plus one tokens on it. 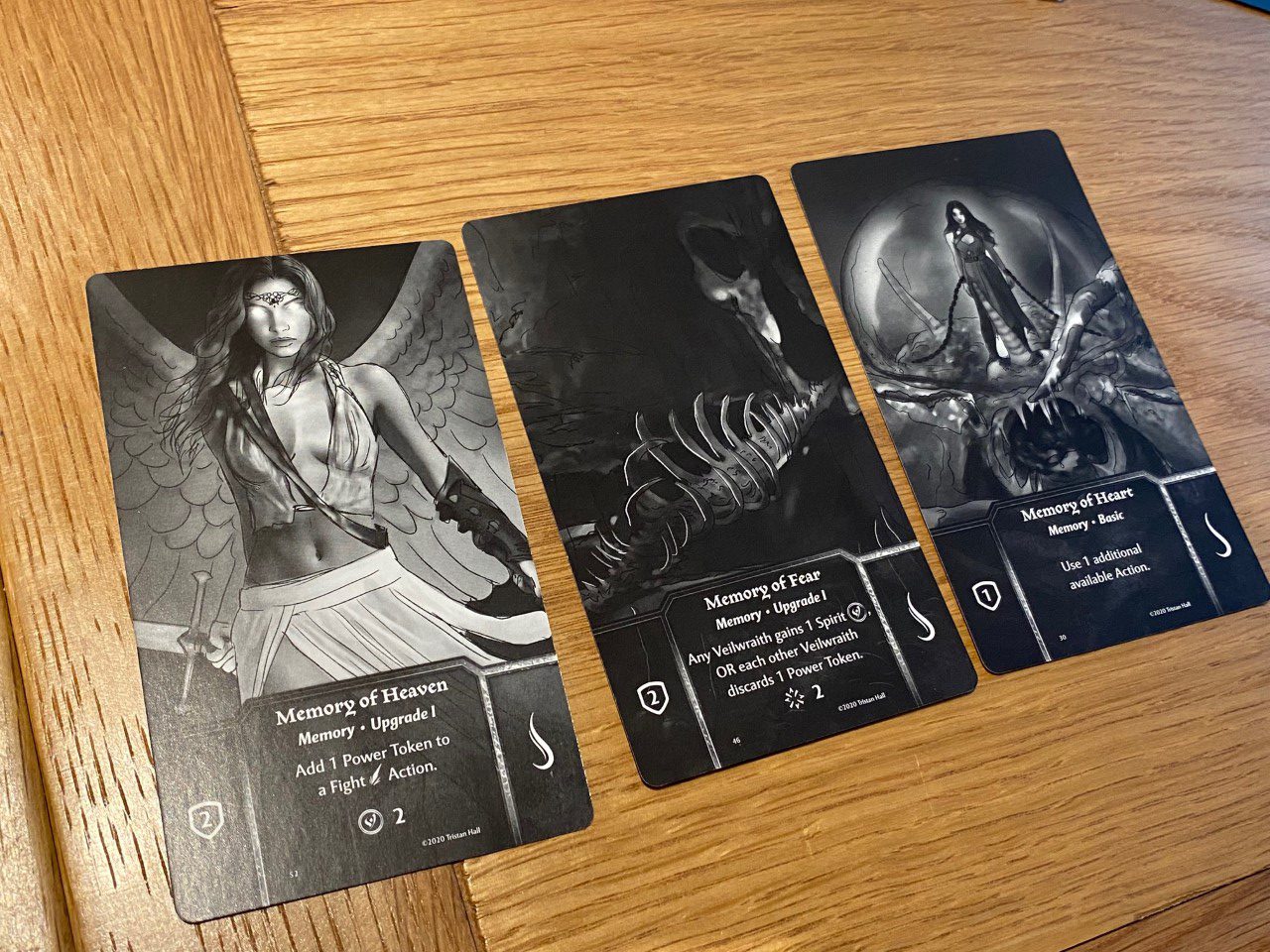 Let’s say we are facing a strength four threat, and the Fight action is at strength one, with two plus one counters on it. If we now turn it and discard those counters, we will have a strength three attack – so we’ll need to discard a card in hand that gives us plus one to our fight value. Let’s assume we have one — and in this example, that threat would be defeated.

In a similar example, let’s say that we are facing an enemy that requires four influence to defeat. In the same board example, if the Fight action card is at the one strength position, the Influence action must be in position two or three, giving it two or three strength respectively. Everything else is the same – whether from tokens on the card or cards in our hand, we need to get four Influence to defeat that threat. 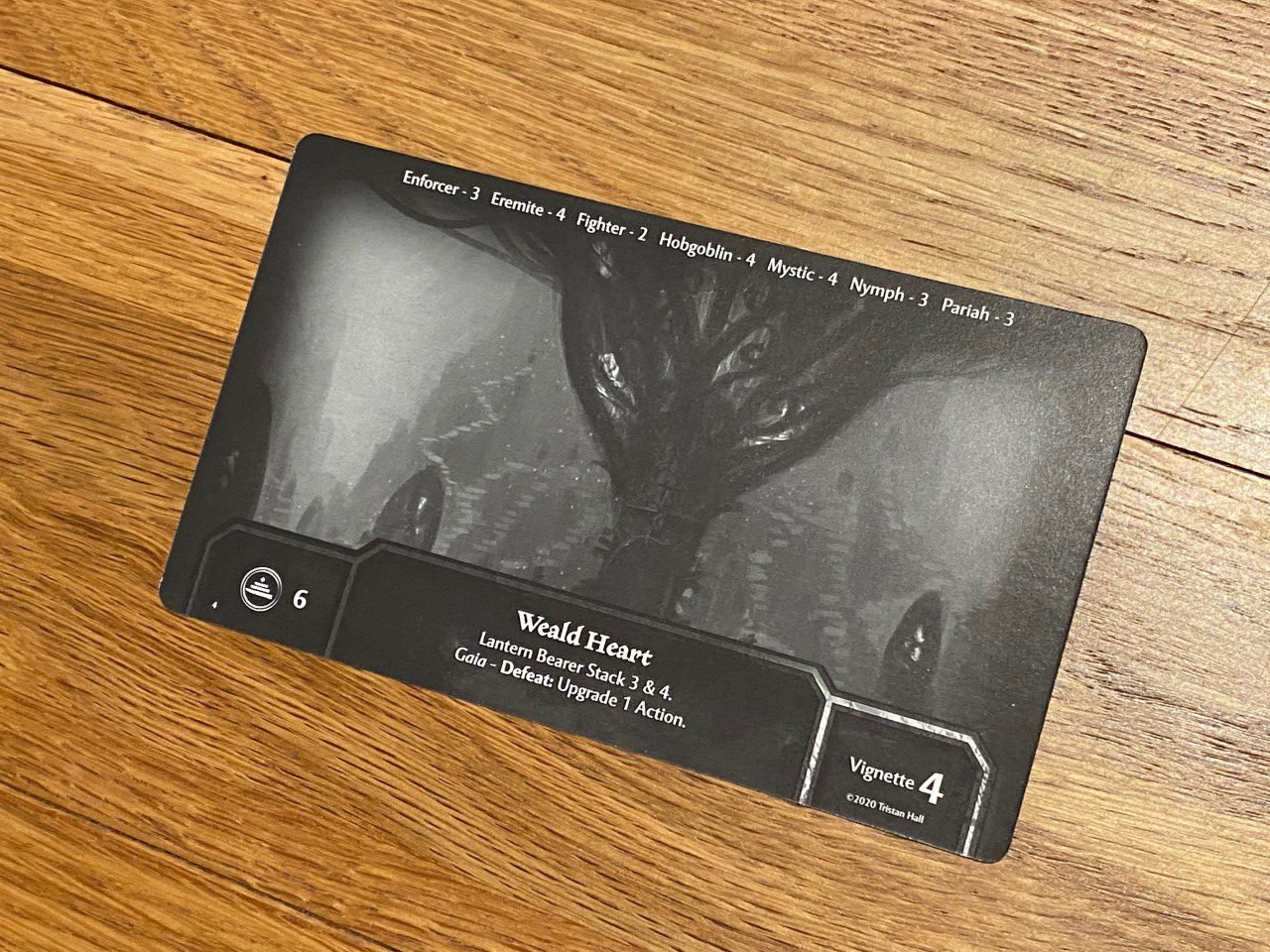 How do we get more cards and power tokens? Actually quite simply. In addition to taking a normal action as I’ve described here, we are also able to tilt one of the other actions by forty five degrees in order to put a plus one counter on it. That same action can’t be used this turn, but it does retain that plus one token until it is next used, allowing the player to build strength over several turns to defeat certain threats.

Aside from the default draw of one card per turn, the player can also rotate an action ninety degrees to draw another card instead of actually using an action. This is generally not brilliant because it means another Threat will arrive and you haven’t addressed what was there, but sometimes, needs must. 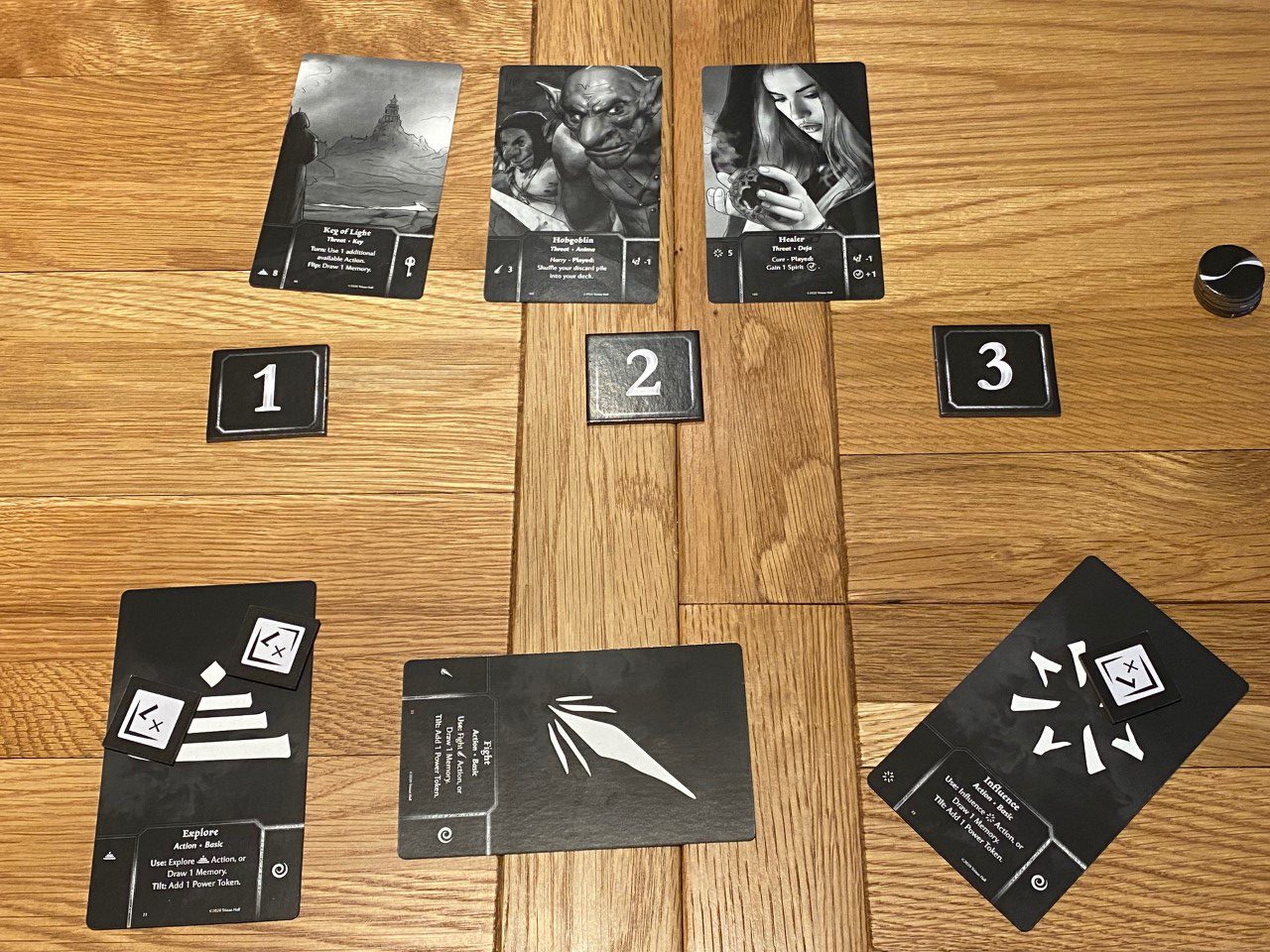 The reason I wanted to explain the different actions strengths like this is because when you take an action (or draw a card instead) you then move that action card to position one, and move the others one space to the right. So, that two or three value Influence action we just took — well after doing that, you’ll need to move it to space one, and move Fight and Explore one to the right (making them more powerful on the next turn).

It is this mechanic that really sets Veilwraith apart from other games, for me, and elevates it above the normal solo game experience. The idea of spending cards to bolster a default action and defeat an increasing number of threats has been done hundreds of times before, but in asking the players to manage their actions like Veilwraith does, you have something really unique. 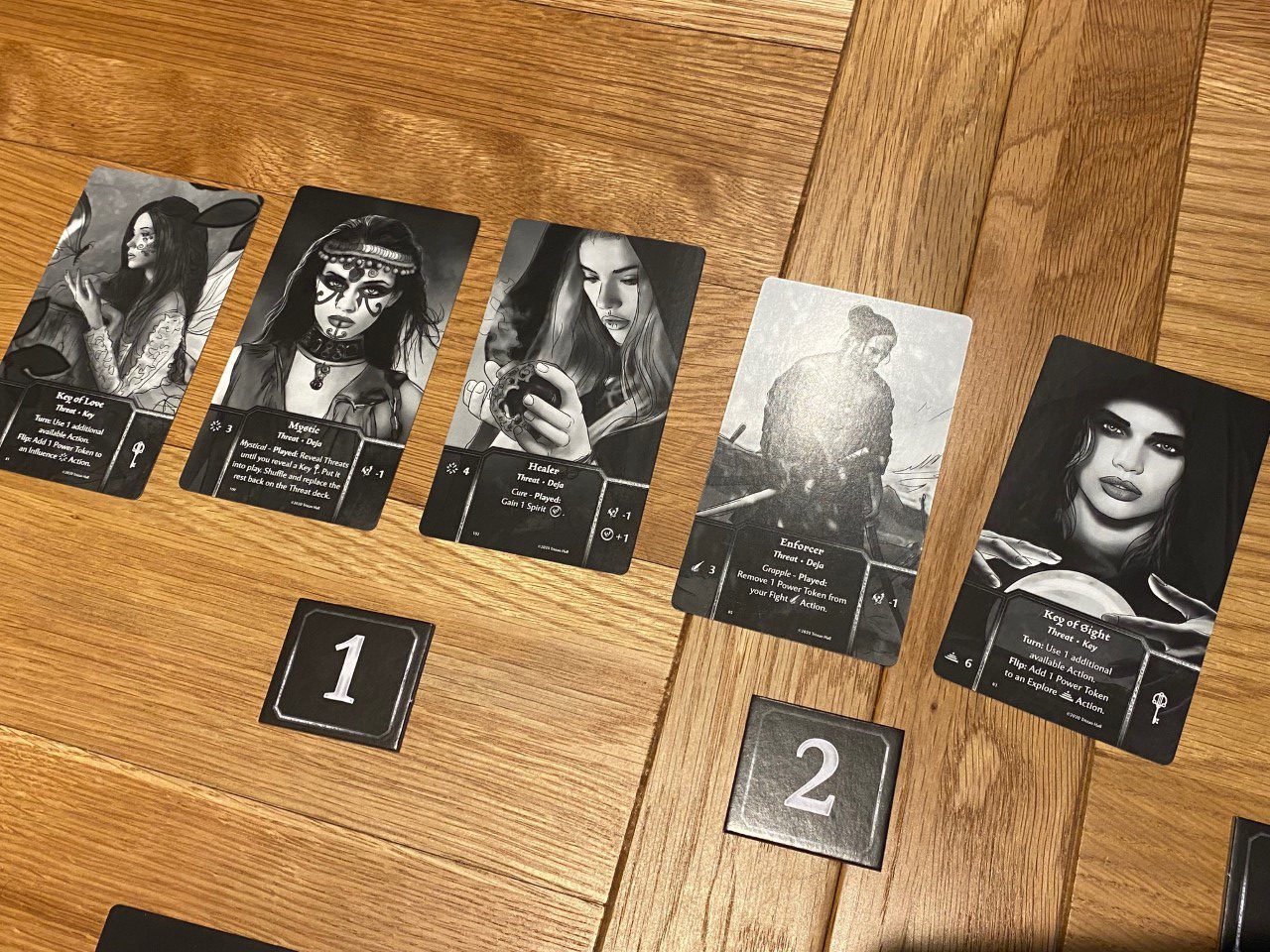 Another clever mechanism linked to this is that of the way in which actions are bolstered. First of all there is the “plus one” token trick I mentioned – which prevents you from using an action, but also makes it stronger. Secondly, there’s the ability to bolster any action by discarding two cards and adding the “combine value” from them. The combine value is a bit fiddly to describe, but in short it’s whatever the lowest number in the bottom left hand corner of your two discarded cards is – your starting deck only has ones on every card, so it’s a moot point really.

Between the manipulation of the action cards, the bolstering through tokens and cards, and by cleverly combining cards, the player is asked to tackle bigger and bigger threats. Some of the bosses require different combinations of Fight, Influence and Explore values to be defeated, making them a particularly challenging foe that stick around for four, five or six turns and cause a lot of problems for the player in the meantime. Some creatures even add rubbish into the player deck, causing certain draws to be negative, or at best, neutral – and of course that always happens right when you don’t want it to. 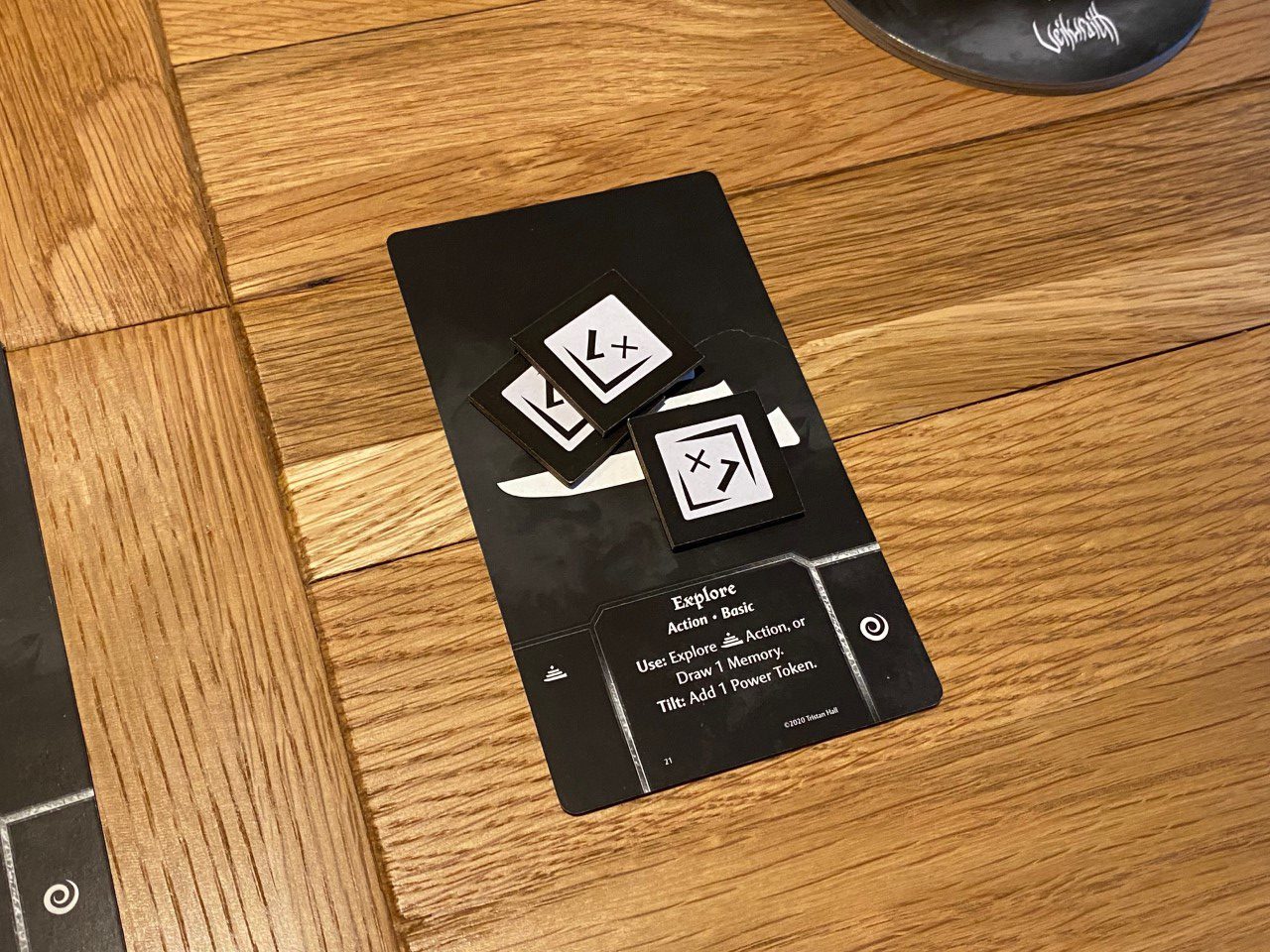 Veilwraith takes Hall or Nothing’s experience in making solo-compatible games and distills it into a focussed experience that is challenging, thematic and clever. It is simultaneously both a puzzle and an adventure, thanks to the mechanics on show and the way in which they are fully immersed in the world that Hall has once again created. It’s much quicker and easier to set up than Gloom of Kilforth and whilst I like Gloom more overall, Veilwraith is probably the best quick solo game I’ve yet to discover.

You can pre-order Veilwraith on their Game Found page.