Another episode of Tools Up! Garden Party has come out, and I was excited to dig my shovel into it! In case you didn’t know, Tools Up! is a couch co-op game where you and your friend are renovating houses. With the Garden Party DLC, you are actually focusing on outdoor spaces and gardens — putting out yard furniture, planting things, mowing, digging and more.

There are, as always, a lot of new features and things to do in this DLC, as well as a bunch of new levels, but what first happens is the level layout changes. When you log into the DLC, it doesn’t take you to the last level you played, but instead takes you to a center point. Though you can move around the Garden Party map faster than the previous map, not knowing which way to go can be super frustrating. I wish the arrows on the screen, showcasing you can go left, right and up, stated what episode unlocks each area, as we have spent a lot of time wandering around. 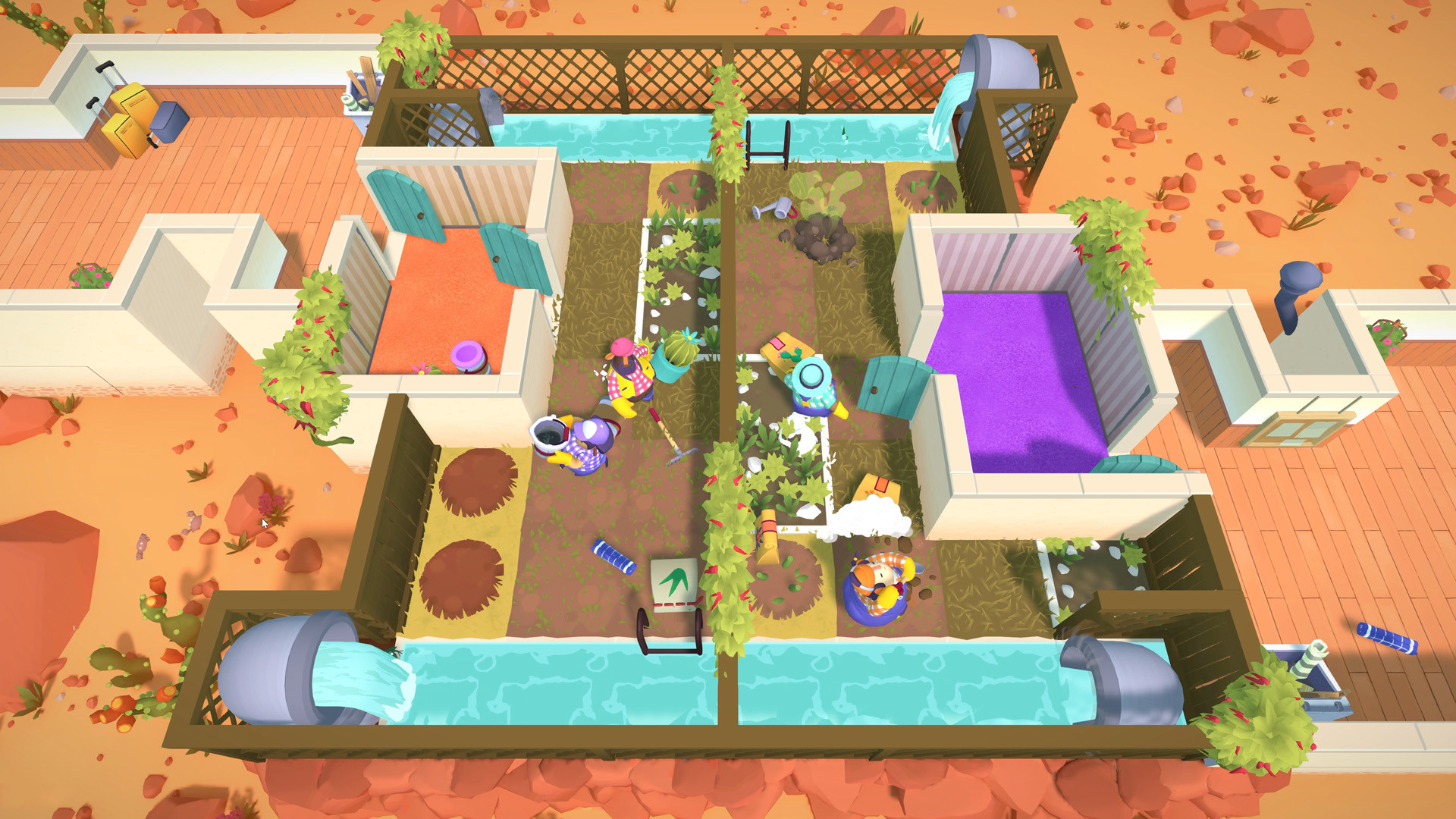 This update does, of course, have a lot of new mechanics — one of my favorites is when you are able to mine massive rocks to create flooring for an area. At this point, however, so many of the levels are filled with tools, but I don’t remember what they are used for. I am not sure when I last used a rake, but I am being given them constantly, along with a shovel, pickaxe, bucket, lawn mower… It just becomes overwhelming and I end up spending a lot of time just moving stuff outside and doing everything by hand because that’s easier.

Another point of confusion in the Tools Up! Garden Party Episode 2 DLC, is just the plant types. You can get plants that come potted, which you must dig a hole and plant, as well as plants that are seeds, where you need to dig a different type of hole, plant the seeds and water them. There are also smaller, decorative potted plants which need to be placed in special rock placements, but these smaller pots aren’t that confusing. When it comes to the two types of plants you need to plant into the ground, on the blueprint, it’s often frustrating trying to figure out what plants you need to plant. Is that cactus one that will be plotted? Or one of the two very similar looking seed packs you have? Can you really tell the difference between light orange flowers on a cactus and light pink flowers on a cactus? And if you can tell the difference, how likely are you to pick up the right seed packet and be able to identify that color via the tiny strip? It just all becomes frustrating, really. 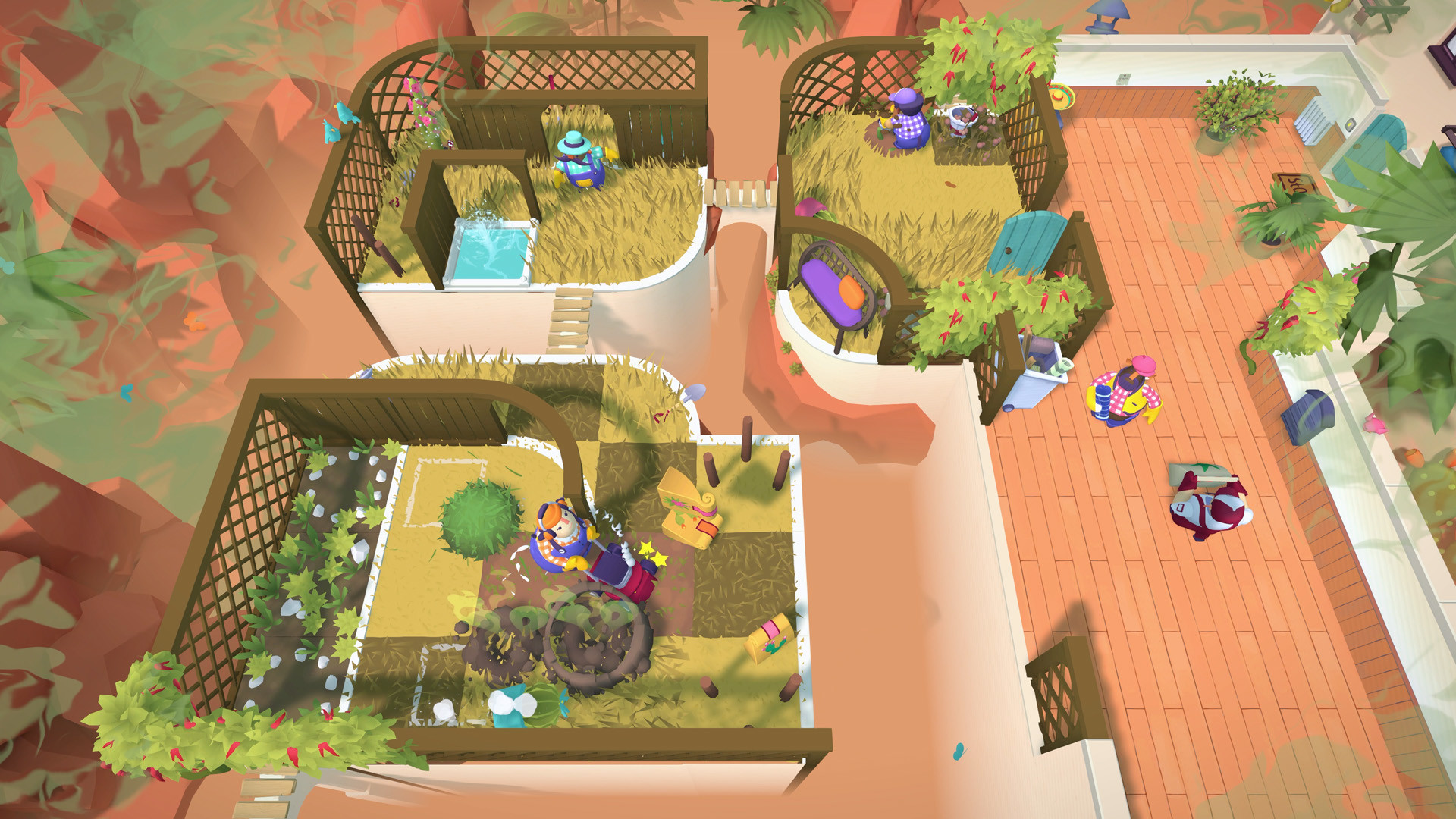 With these frustrations, some levels are nearly impossible — and without them, you will likely get a low score. We tend to play local two player, but this DLC seems to be made for those who have larger numbers then us. We are often running out of time, despite working quickly and quite efficiently through the levels, with only 80% percent completion of the garden. This percentage only gives one star (well, the icon in this game is actually a leaf, but you know what I mean), most of the time, which feels super disappointing and makes it so that we don’t want to continue playing. It feels like the game was not optimized for only two players, creating something frustrating for those who do want to play but don’t have as many friends as others.

Tools Up! Garden Party Episode 2 is the first section of Tools Up! that we have just been unable to complete. It’s too frustrating and challenging, there are too many tools, and I find everything too challenging now to continue on, which is really quite sad as we previously enjoyed the game so much. Maybe in the next DLC things will be more balanced.

You can find Tools Up! Garden Party Episode 2 on Xbox, PS4, and PC.

Tools Up! Season 1: Garden Party — We now have plants!