I remember when I first played Cannon Fodder. It was 1993, and I had been looking forward to the game since the Sensible Soccer VS Bulldog Blighty demo which appeared on the front of what I believe was Amiga Power magazine. For those unaware of this, it was a special demo of Sensible Soccer, with the only two teams being England and Germany in three scenarios: 1914, 1939 and 1966. One of these modes replaced the ball with a live grenade. 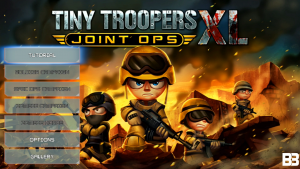 This demo was released during the development of Cannon Fodder as a marketing ploy; it certainly worked on my twelve-year-old brain. The premise was simple: with a basic two-button mouse, control your soldiers though various missions, killing and destroying buildings. It had a darkly slanted sense of humor and caused a bit of controversy at the time. Also, it had a killer intro tune. It’s a game I have played fairly regularly even up until this day.

Tiny Troopers appealed to me from the start, due to its — on the surface — similarities to the aforementioned game, which is incidentally one of my favorite games of all time. So the game had a lot to stand up to. And I will be referring to and comparing the two almost constantly throughout this review.

Tiny Troopers XL on the Switch is a compilation of all the previous entries to the series, making it a good version to choose if you are new to the series. It presents sixty standard missions, a zombie campaign and a zombie horde mode — which is an endless survival mode. 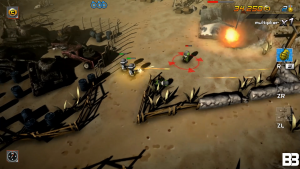 The similarities to Cannon Fodder are numerous, but as twenty-five years have passed since that game, it also has a lot more features to it. You are presented with missions which are either kill all enemies, destroy all buildings, etc. And you guide your band of Tiny Troopers through the level, completing the objective and getting to the extraction point. So far, so much the same. But elements have been added to all aspects of the game.

As before, your soldiers rank up after each mission, but this now results in said troopers getting better (ore HP, better accuracy etc.), giving you much more reason to keep your best guys alive. (Jools and Jops will be forever missed). But hey, not to worry, the devs have thought of that. At the end of mission screen, you can resurrect any dead troopers for three Medals. We will get to those later.

Missions are pleasantly varied. Alongside the standards of “Kill all Enemies” and “Destroy Enemy Buildings” there are also survival missions, which see you trying to survive wave after wave of enemies with your standard weapons, or a gauntlet of enemies along a path whilst riding in a vehicle. Some are escort missions, either walking through the level with journalists or rescuing folks and getting them out. Some even rely on very specific targets, so, if you felt like it, you could just run and weave, heading straight for the target. You also get waypoints pointing you to your targets, so it is much harder to get lost. Difficulty is also a factor here: each level, you can choose difficulty levels between 1-4, represented by bullets, these make the enemy harder to kill, more accurate with their guns, and more damaging, but generally will not change much about the mission objectives. 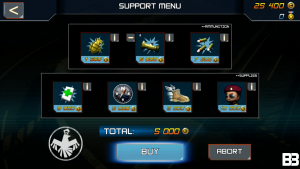 Tiny Troopers XL also features a Supply Drop system. During missions (again, like Cannon Fodder), you can collect grenades and rockets to help destroy buildings and vehicles. Along with those pickups, you can pause the game at any time, and call in a supply drop, consisting of not only grenades and rockets, but airstrikes, healing items, speed boosts and even reinforcements if you have lost a trooper on the current mission. This does have the effect of making the game a little easier, and makes exploring for weapons irrelevant as long as you can afford them — and money is not hard to come by.

The next major difference is the upgrade system. Every kill earns you money, and there are also pickups in the maps that afford you more, such as Military Intelligence, bombs which you defuse, dog tags, random objects which you destroy, and more. This money can be used for a variety of things. First of all are the upgrades; you can upgrade your troops in a variety of ways, by upgrading their stats, such as damage and accuracy etc. These all go on a scale from one to five, and cost increasingly more each time. Your money can also buy help, in the form of an extra trooper who hangs around for the next mission only. This is handy if you have failed the mission and just need more firepower. The additional troopers also have extra abilities, like starting with a certain number of grenades/rockets, or just straight-up extra power. Lastly, and least important, are the skins. There are a number of different skins you can apply to your troopers. Not much else to say on that really, except that walking into enemy territory in real life while wearing bright pink camo might not be a good idea.

Finally we have the medals. These show up in hidden places on the map, with one or two available to collect. These are what you can use to raise your fallen troops after missions. They are also used to unlock the special one-off troops you can purchase. 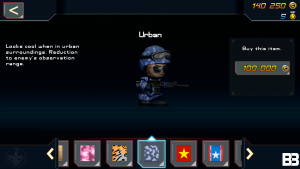 Controls are your standard dual-stick shooter affair: one for movement, one for direction of fire. Also, on the Switch, you can play with the touchscreen too, which should not be surprising, as Tiny Troopers was also released on mobile devices. Your extra weapons are allocated to the trigger button and, when pressed, bring up a reticule, which you place with the right stick, and let go to fire. I confess, I did not get this at first, and failed the tutorial a couple of times. You will see this if you watch the gameplay video above.

I also cannot fail to mention that I ran into a bit of a glitch at one point, in which a piece of the geometry failed to load and my troopers became stuck in it, meaning I was forced to suicide my way out at the hands of a dropped grenade. I was not able to recreate this however, so can only assume it was a weird one off.

In conclusion, Tiny Troopers XL adds a lot to the formula started by Cannon Fodder, and is a great game in and of itself. However, it just doesn’t have the same kind of heart as the classic — mainly because many of the extra features in the game reduce its difficulty in a way which reduces the appeal to keep fighting on. I am in no way trashing Tiny Troopers XL; it is a great game, and for those who have not played CF it may well feel extremely fresh and new. But, for this old gamer… 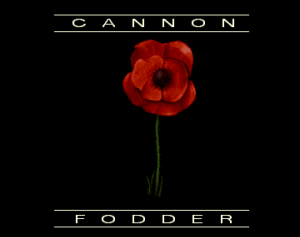 …war has actually been more fun before.