When you hear about board games and tabletop games, there are a few titles that are always brought up. One of them is Ticket to Ride. We’ve actually never played Ticket to Ride in our group — as we tend to stick to newer games and games released by smaller companies, but after having a new member join the group who actually is a train driver, the time felt right. Previously, B3 has covered some of the expansion packs for the game, as well.

Ticket to Ride is a two to five player, card-based game, that is rated ages eight and up. This game isn’t complex and takes only a few minutes to learn. In the middle of your group, there is a map of America (in Ticket to Ride, the classic game). This map has loads of different routes that you will need to build trains on to connect them. You will get points for building big routes, instantly moving your points tracking token around the edge of the board. 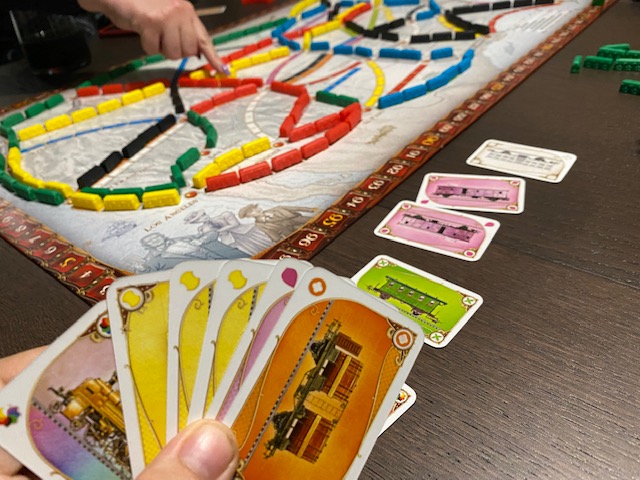 You will be building the train by getting cards in your hand that all are the same color. These can be turned in for a full length between two stops. There are also wild cards to help with longer trains. In Ticket to Ride, you can get cards by either drawing blindly from a face down deck or selecting face up cards from a public inventory. You can select two cards per turn, as long as you do not pick up a face up wild card, in which case you can only select that card as it’s pretty powerful.

There is a second type of card, however, within the game. These are ticket cards which will give you bonus points at the end of the game if you place train lines between specific locations on the map. These points are shown on the card itself and depend on how complex the route will probably be from these two stops. You will start the game with a few of these, but can actually draw an extra three of them on your turn, you have to keep one, but can keep up-to all three. This is a big risk-reward though, as any ticket card not finished by the end of the game will cost you points! 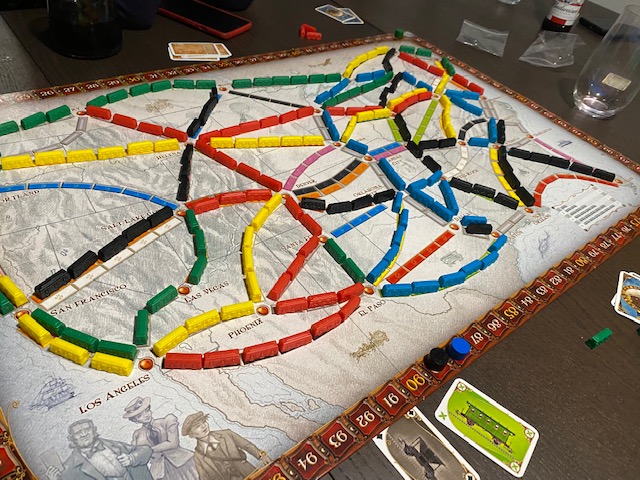 There are also bonus points for the longest train route at the end of the game, which has some rules around counting loops and how train routes work. Watching the board fill up with train carts (as you can either draw cards or build on your turn) becomes a big part of the game. We were playing with the max player count, so the map became very colorful and full of life. The train pieces are small, plastic, vibrant pieces (and the board game even comes with some bonus trains in case you lose some). When placing down trains, there are gray boxes as well as colored boxes — you will need to hand in the specific matching color card on the color boxes (apart from the wild card, which can be used anywhere) however for grey, you can use any set of colored cars.

Often, people will block off routes, filling them with their own trains. This can actually cause a lot of issues and you can find yourself having to track around the map, taking a long route, to make it to the destinations on your ticket cards. Longer placements of trains take more time, as you need to draw up more matching cards, but can give far more points and is a great strategy in the game. Making a bunch of short trains will result in you being quite far behind, something we saw in our own game. 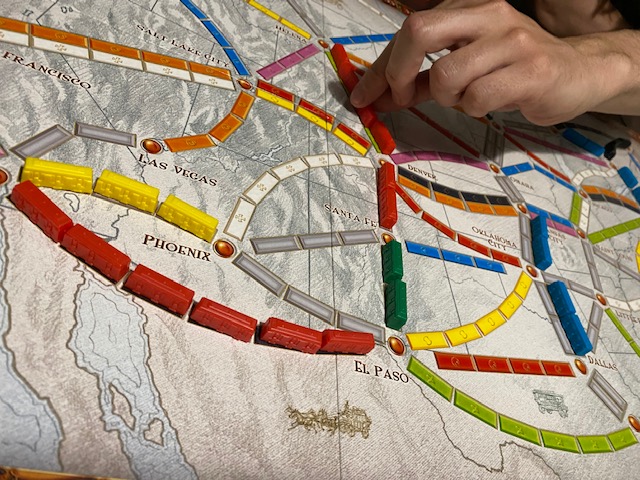 Ticket to Ride is a fun classic. It’s very easy to pick up and learn. There is a feeling like anyone can win, due to the ticket cards and bonuses at the end of the game, and there isn’t a huge chance to really fight with anyone or mess them up too much. The gameplay, paired with the ease of entry, really proves why it’s a classic.

You can find Ticket to Ride on Amazon.