When it comes to working from home — or indeed gaming from home — you’ll want a headset that stripes away all of the other noise around you. Our console sits in the living room, meaning that if you want to play Xbox or Playstation games, you often have distractions all around you. Many of the other headsets I’ve used have been good at blocking out some of the noise, but none of them have been this good.

The SENNHEISER GSP 602 headset from EPOS have really done a good job at making quality audio that’s set inside a soundproof headset, allowing you to fully immerse yourself into your gaming experience. This headset is wired, with one wire to plug into your controller, so that you can play from the comfort of your own couch. The wire is plentiful, making the headset very easy to plug in, play and use!

The sound quality is just fantastic — it’s far better than earbuds and a step above other headsets as well. The GSP 602 feels so nice to wear and again, you end up really pulled into your gaming session. The headset has a microphone on it, so you can game and talk to friends, with the added feature that flipping it up mutes you — another useful feature when playing games in a living room or around the family, as you can easily, mid-game mute to talk to whoever else happens to enter the room. The other side of the headset has a dial so that you can increase or decrease the volume easily. 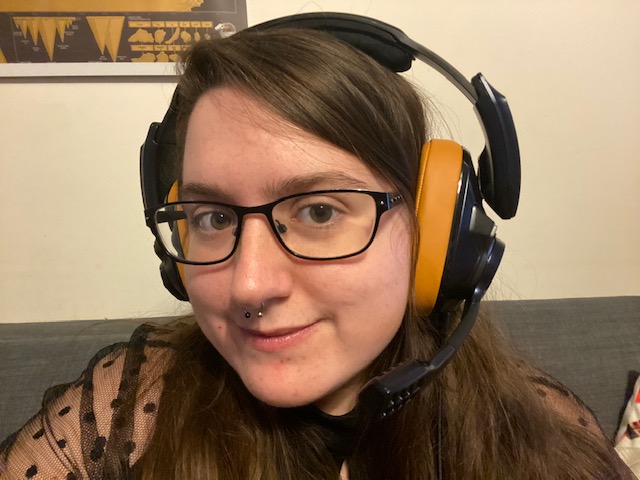 The headset itself is adjustable, so you can make it fit your head perfectly. I love the orange and navy color scheme — it’s one that just looks sleek — and that’s the thing about the GSP 602, it looks so sleek. The headset itself also feels durable — and has lasted quite well so far — which is a plus. Many of the aspects of this headset are actually metal, so I don’t think it will break easily!

The GSP 602 works on Xbox One, PS4, Nintendo Switch, and PC/Mac, using different provided cables (one for consoles and one for PCs), though I haven’t found myself using it with my computer. I often opt for USB headsets when it comes to computers and the cable provided for the GSP 602 for PCs has two jacks instead of a USB plug — though this is just my preference. I do find that it’s just perfect as an accompaniment to my console collection in our family room, and has found a permanent home among our consoles.

You can purchase the GSP 602 on Amazon.