Terraforming Mars is arguably one of the best modern board games ever made. Actually, sod it, at the risk of offending chess aficionados, Terraforming Mars is arguably one of the best board games ever made, period (as my American friends would say). Personally, I don’t quite call it ‘The Best’, but I do think it is an incredible example of how theme and gameplay mechanics can combine to create something wonderful. It is also extremely accessible whilst offering unusual levels of depth, so all in, it has quite the heady mix of success factors. 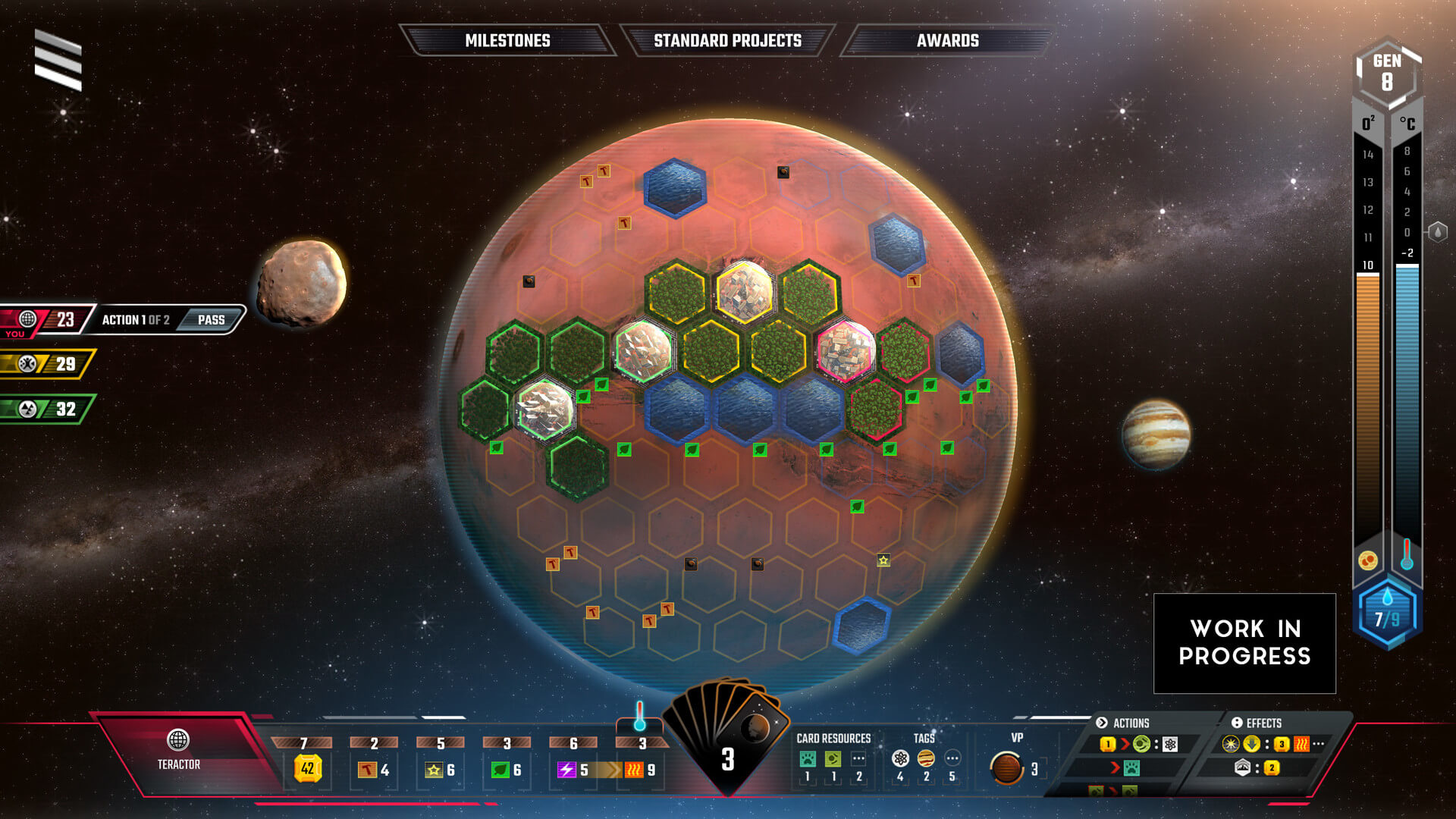 One thing that the physical edition of Terraforming Mars is bad at, however, is presentation. Measured against the quality of the mechanisms that power it, the build quality of Terraforming Mars is dismal. Measured against any other board game in the past two or three years, its presentation is, at best, bad. So now I find myself playing the video-game adaptation and hoping that in this digital form, I’d at least never have to worry about knocking the table and losing the position of every single resource track laid out on it.

Firstly, I should say that this is very much a brief preview of Terraforming Mars on Steam. It was originally released at PAX earlier this year and I’ve been playing it ever since, once or twice a month, in the hopes that it would be updated. Unfortunately it never has been, so I’m forced to write this health warning instead: the digital version of Terraforming Mars that I’ve been playing is offline only, has only one AI opponent and, worst of all, features the same starting corporations and card order in every single game. As such, I’ve experienced the same starting benefits and card order in each of my twenty-or-so games to date.

If I were being generous (which I often am), I’d say that the digital version of Terraforming Mars has been designed to look pleasingly authentic, in as much as that the same crappy (but loveable) card art has been carried over from the physical game into the digital one. The map itself looks fine (albeit there are fringe areas that need a bit of angling to see in a single view) whilst the GUI contains most of the basic information you’ll need to plan your turns. It’s by no means the best looking digital board game I’ve played, but it’s largely functional. 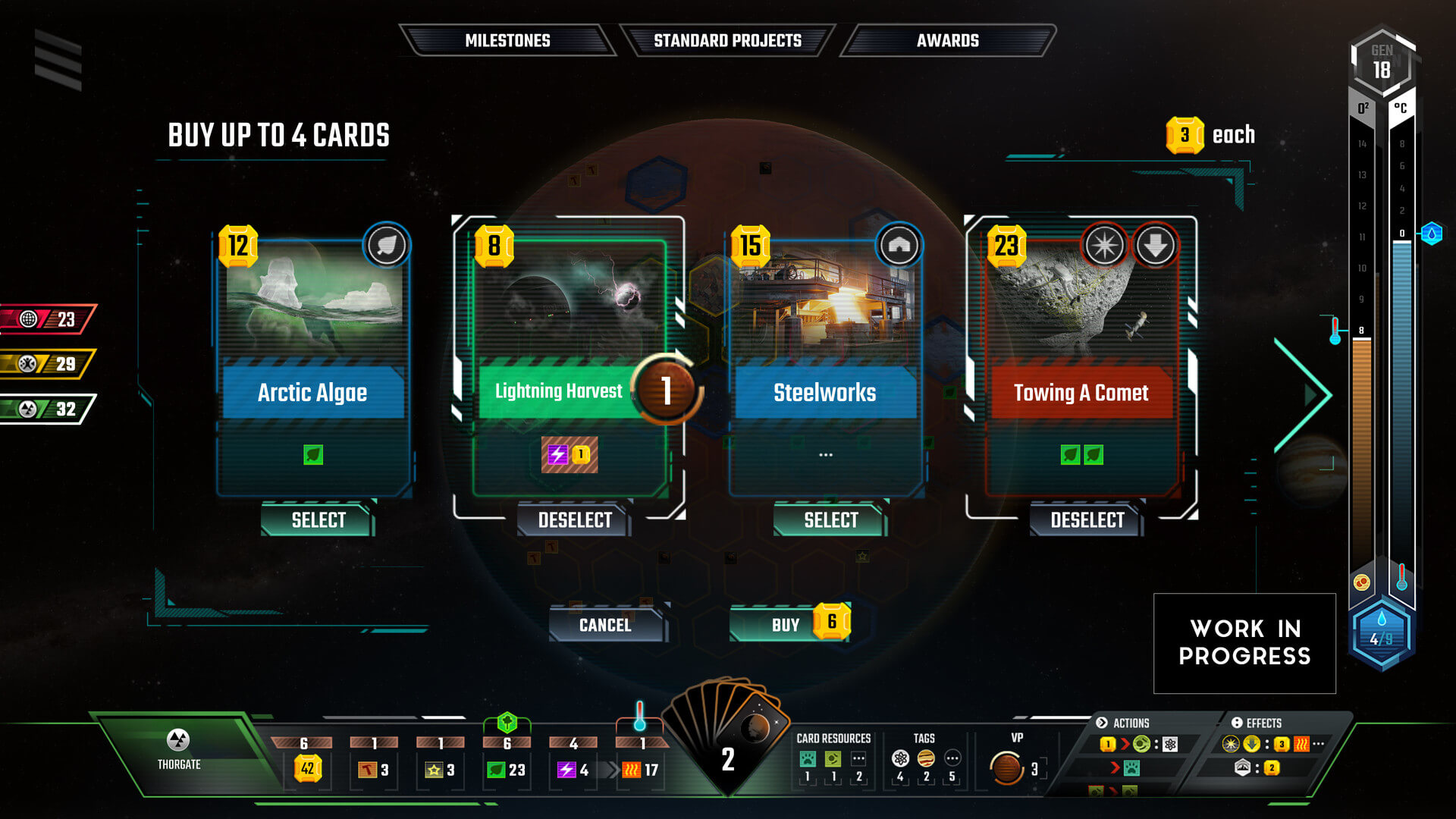 Where I think some work might need to be done is in providing a bit more information for each of the opponents, since some of the cards relate to their resource production or current supply and that information requires some clicks to find. Similarly, the game forces players to navigate to several different views to see the cards in hand, or those that have already been played.

I understand why — Terraforming Mars becomes a real mess of cards late on (each player might place twenty or thirty in a game, minimum), which would be unmanageable, but currently there is no visual representation of the cards played as cards. It’s more just a view of actions available and then a subsection where players can see the actual cards. I did also occasionally find myself confused about which view I was in because the game doesn’t always communicate the current phase as well as it might, although I hasten to add that the info is there, it’s just not front and centre.

The AI, for the experience I’ve had, at least, is adequate. Still, like some of the other aspects of the game I’ve mentioned, there isn’t an amazing amount of visual detail about what the other player is doing, so you’ll need to keep a close eye on their production bar (which will flash up whilst the AI turn happens) and their pile of used cards. So far, since the setup of each game has been the same, I haven’t seen much in the way of varied AI tactics, but I’m not overly concerned by what I’ve seen — the game was competent enough to challenge me at least the first two or three times I played it. 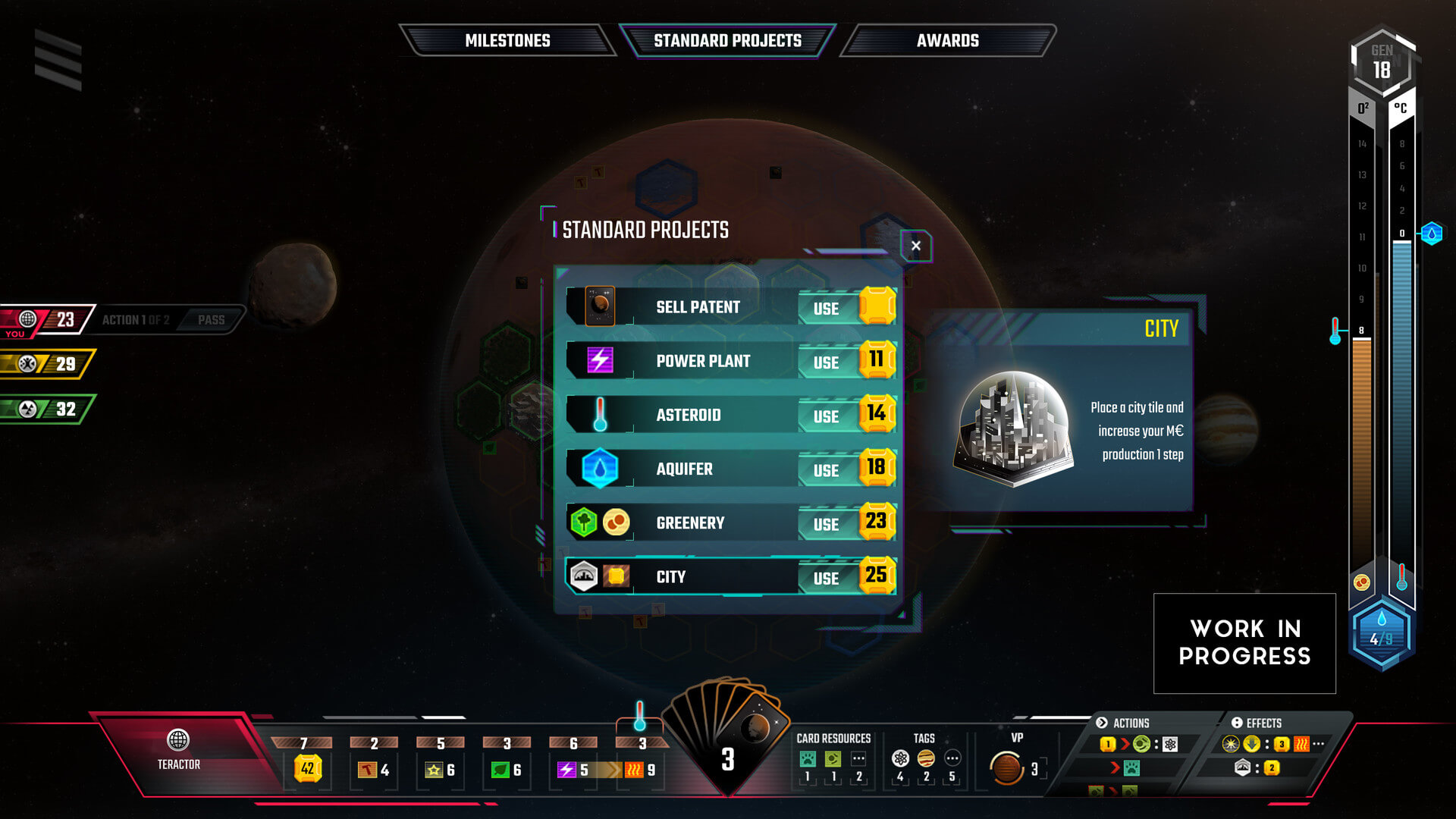 Unfortunately, there isn’t much else I can say about Terraforming Mars in its current digital form, except to say that I am very supportive of its existence and based on what I’ve seen so far, I’m looking forward to what the finished product will be like. Clearly, the proper randomisation of the setup is something that needs to happen, as are a few cosmetic tweaks, but fundamentally, this is a digital interpretation of a classic game that bears some consideration. If nothing else, it further simplifies an already straightforward game and it absolutely recreates the deep, addictive gameplay that has made Terraforming Mars such a huge success.

Terraforming Mars is being developed for both PC & Mobile releases.