Terra Mystica Big Box is a dry, heavy fantasy Eurogame – and it is brilliant!

It’s very unlikely that you can have been involved in hobby board games for long without at least encountering Terra Mystica. This ten-year-old game of terraforming, worker placement and pseudo-area control was designed by Jens Drögemüller and Helge Ostertag, and has long since been regarded as a definitive example of its genre. Now, ten years after its first release, Terra Mystica Big Box has dropped — and as long as you like your games dry as a desert, it’s an absolute banger!

Terra Mystica Big Box contains a number of things — the Terra Mystica base game is the main thing, but there are also two large expansions known as Fire & Ice and Merchants of the Seas, as well as an Automa expansion (from Automa Factory) to enable solo play. BoardGameGeek suggests that some components from the only mini-expansion yet released are included, but that wasn’t the case in my copy, so I’ve also added that content since receiving Terra Mystica Big Box. 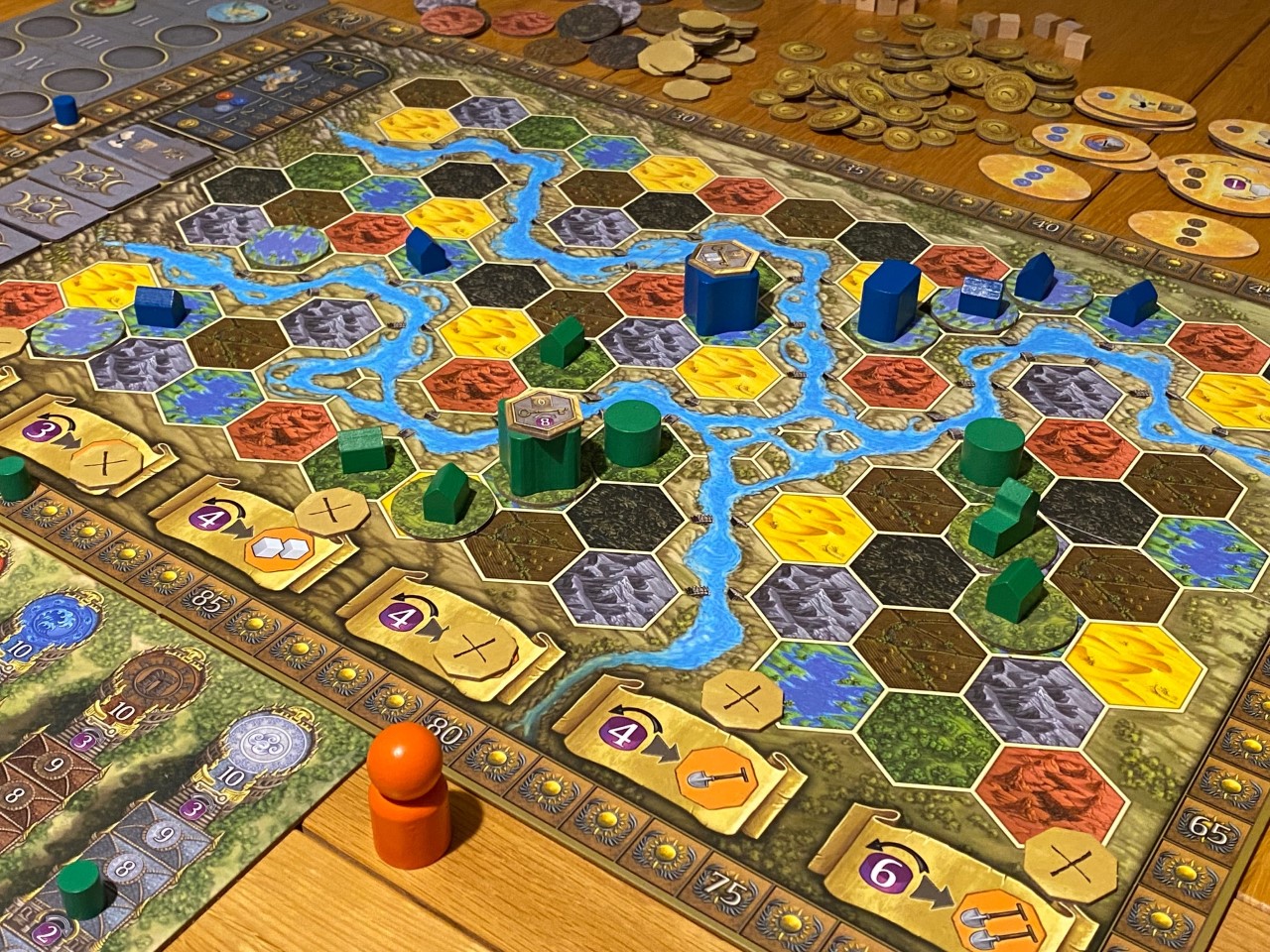 Upon opening Terra Mystica Big Box you’ll be amazed by the number of wooden components and punch boards. There are also two large, double-sided game boards, which actually means that there is one fewer map to play than there would be if you were to purchase these expansions separately — the missing board is the revised base game map which previously came with Fire & Ice. If you don’t know it, you probably won’t miss it to be honest — I haven’t.

Thankfully, to help deal with this content, Terra Mystica Big Box includes a huge number of baggies that go along with a sticker sheet and a guide that explains how to bag and prepare your Big Box for play. In summary, this involves a mammoth two to three hour punching and bagging session where you’ll sort components into the bags and then use the stickers to indicate their origin — base game, expansion, solo components etc. This isn’t as good as a custom insert, but it does get the job done and aids massively in future setup. 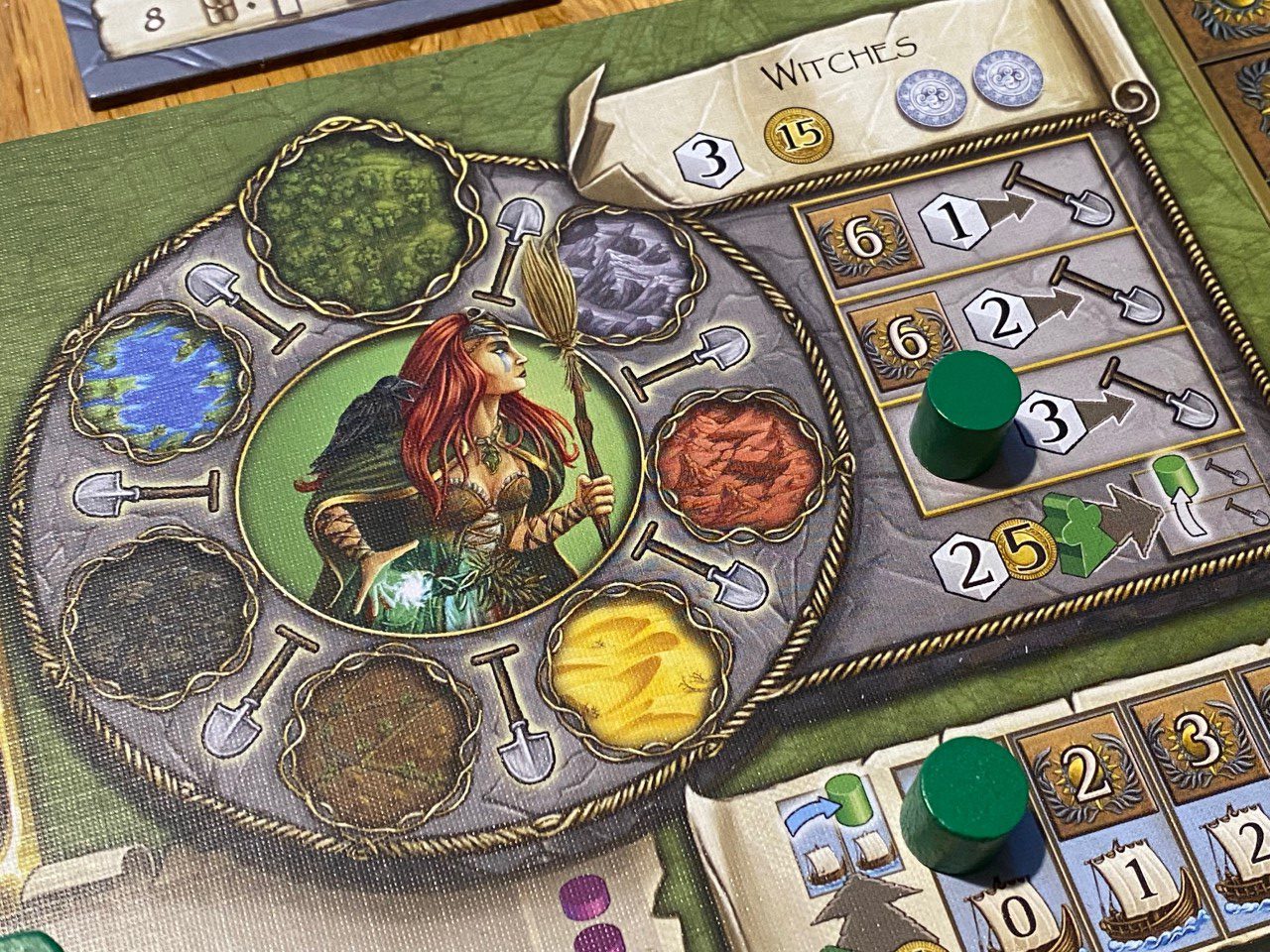 When it comes to gameplay, Terra Mystica Big Box is the kind of game that some players can just bounce off. For starters, the box is almost a foot deep and packed to the brim without an insert. But that’s only half the story, this is your very classic German eurogame — with muted, slightly janky artwork (by the legendary Dennis Lohausen) which you either love or hate, but can hardly call especially evocative or exciting.

The teach is also a good twenty minutes of detailing relatively complex systems such as how power (a key resource) has to charge by moving between three dishes before it can be used, or how each race terraforms hexagon spaces by spending the prerequisite number of shovels. Explaining how buildings ramp up in size and value is easy, but teaching a new player why you might want to retain some smaller buildings to ensure balanced income is quite a nuance – as is explaining when to (or not to) place buildings next to other players (which generates a mutual benefit). 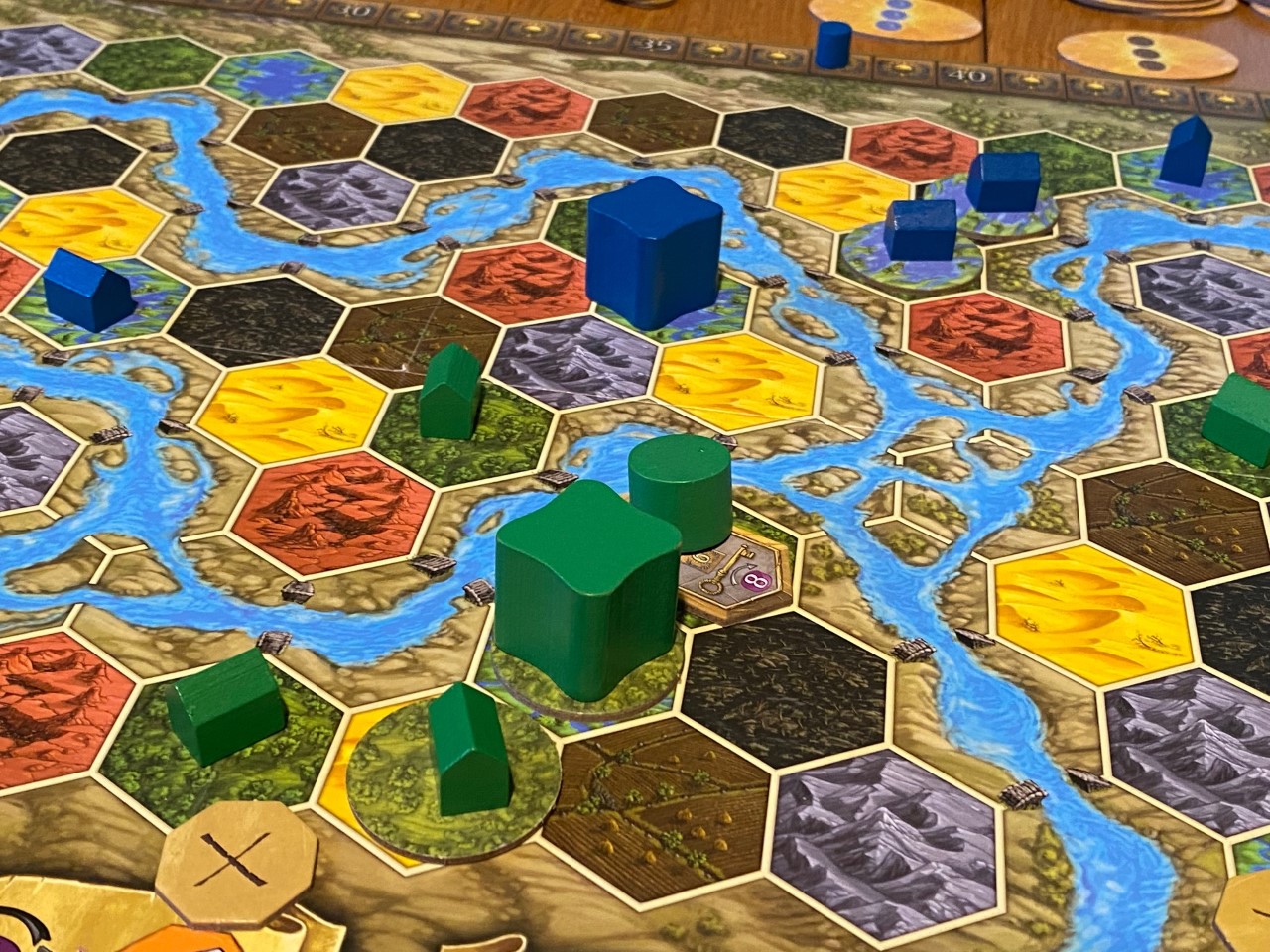 But if you can get through the sheer mass of Terra Mystica Big Box, the totally imbalanced player races, the medium-heavy teach and the very complex explanation of what is a bad or good move, then Terra Mystica Big Box is just ridiculously, incredibly fantastic. It’s a game that you simply cannot understand all the intricacies of until you have played it — I don’t know — maybe a hundred times. There are fourteen different races that each play differently (and some are strictly better than others — without question) and the game supports from two to five player counts, each of which offers a very varied experience (also one, but that’s the same as two for the purpose of this explanation). With any amount of expansion content, that’s just a ridiculous amount of potential combinations to explore.

Even if the same players face off with the same factions, though, the game has enough scope for variation that it never feels the same twice. Each game lasts six rounds and has a pair of variable objectives which will guide the players to score bonus points, whilst the “normal” focus of placing buildings (and converting them to cities) and expanding on various tracks (shipping, terraforming power, three cult tracks and more) is ever present. 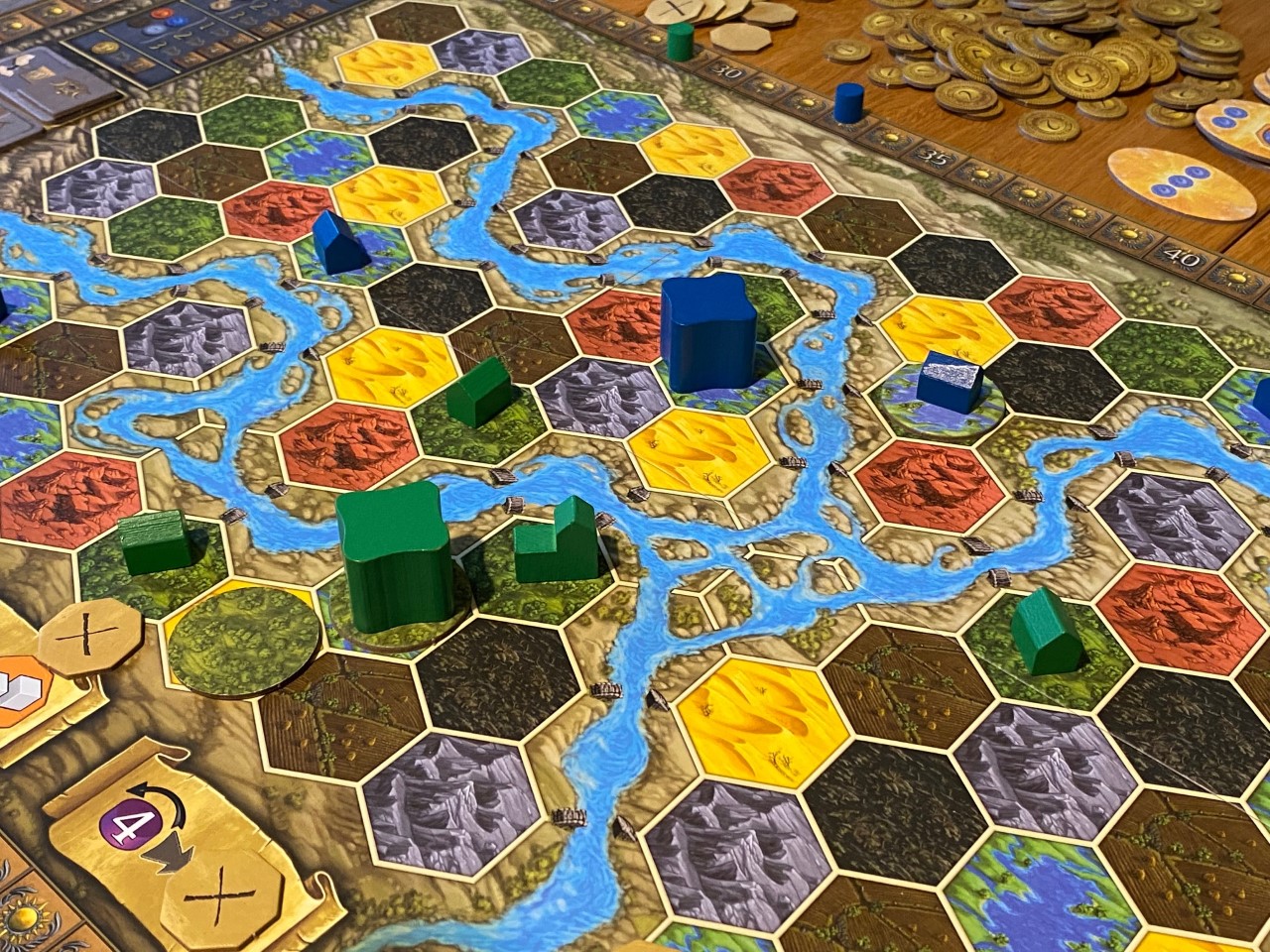 The thing is, you’ll never have as much as you need in Terra Mystica. Not enough cash, not enough workers, not enough power, not enough turns and not enough rounds — and just as your engine feels as though it is getting going, the game will end. Six rounds, even though it may take 90-120 minutes to play through them, is simply not enough!

This is because of how progress is made in Terra Mystica Big Box. Each race needs to generate shovels to terraform the land — the less ideal the land is for your race, the more shovels you’ll spend. When you have land that is ideal for you in a space adjacent to an existing building, you can expand onto it. Building shovels costs workers or power, building new settlements costs workers — and workers are in limited supply. 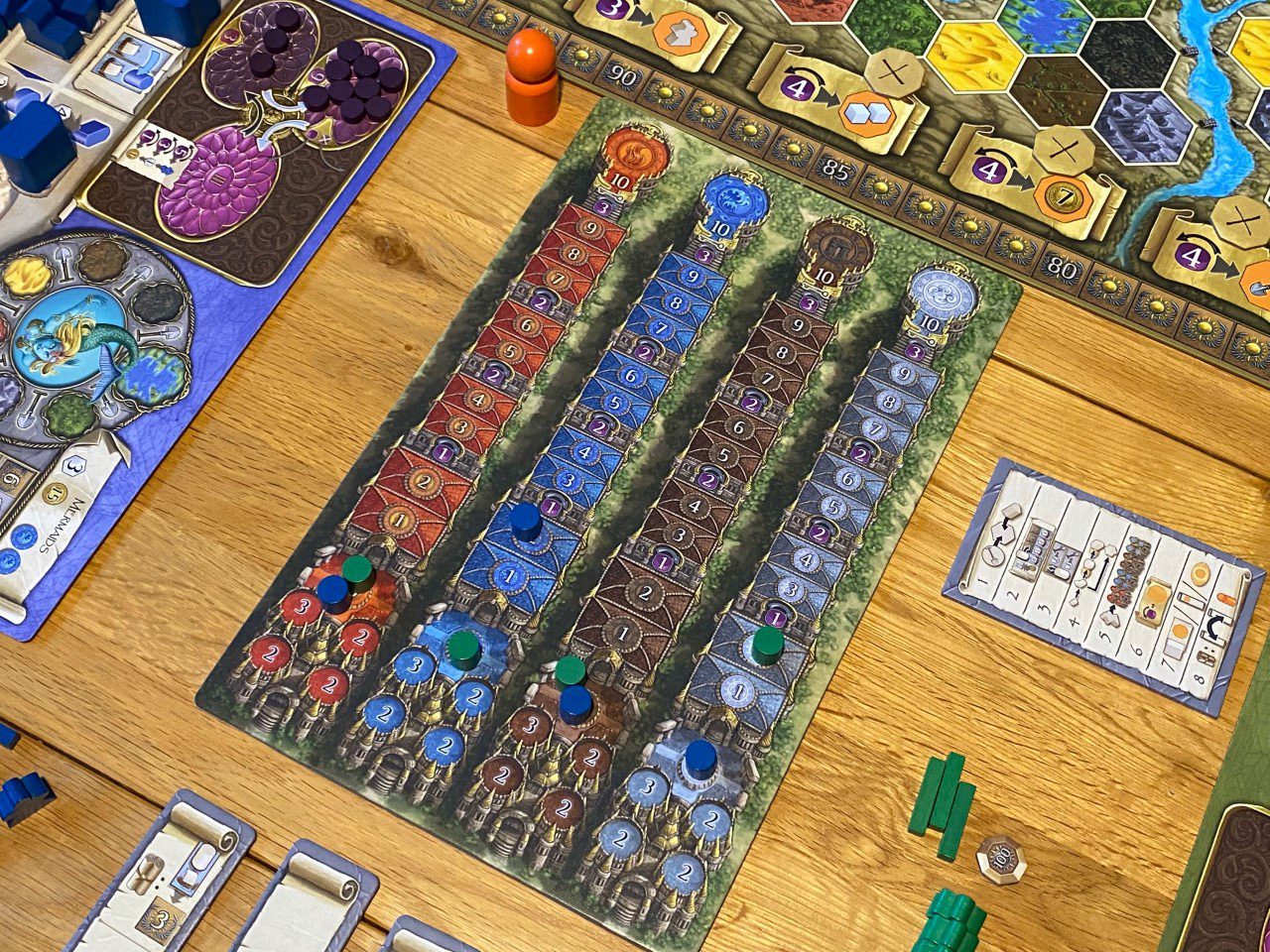 Each round (that’s round, so six times total) the players will choose a bonus tile and draw their income — including power, money and workers — for the round. Bonus tiles offer just that, a small bonus such as some extra money or power. If you’re really lucky, maybe a priest (which is a less common, powerful worker). Income is the total of resources shown on your player mat beneath spaces where you’ve taken pieces and put them on the board — so the more settlements you build, the more workers you get. The more trading posts, the more power and money, and so it goes on.

Settlements always go on the board first. Then, they can be upgraded into trading posts — but when a trading post replaces a settlement, the settlement returns to the player board. Trading posts can then be upgraded into either shrines or into a stronghold (of which each player only has one.) Knowing when to upgrade is critical, because even though settlements and trading posts are lower level structures than shrines, strongholds and temples (which are also a unique building that follows on from a shrine) provide none of the essential basic resources. 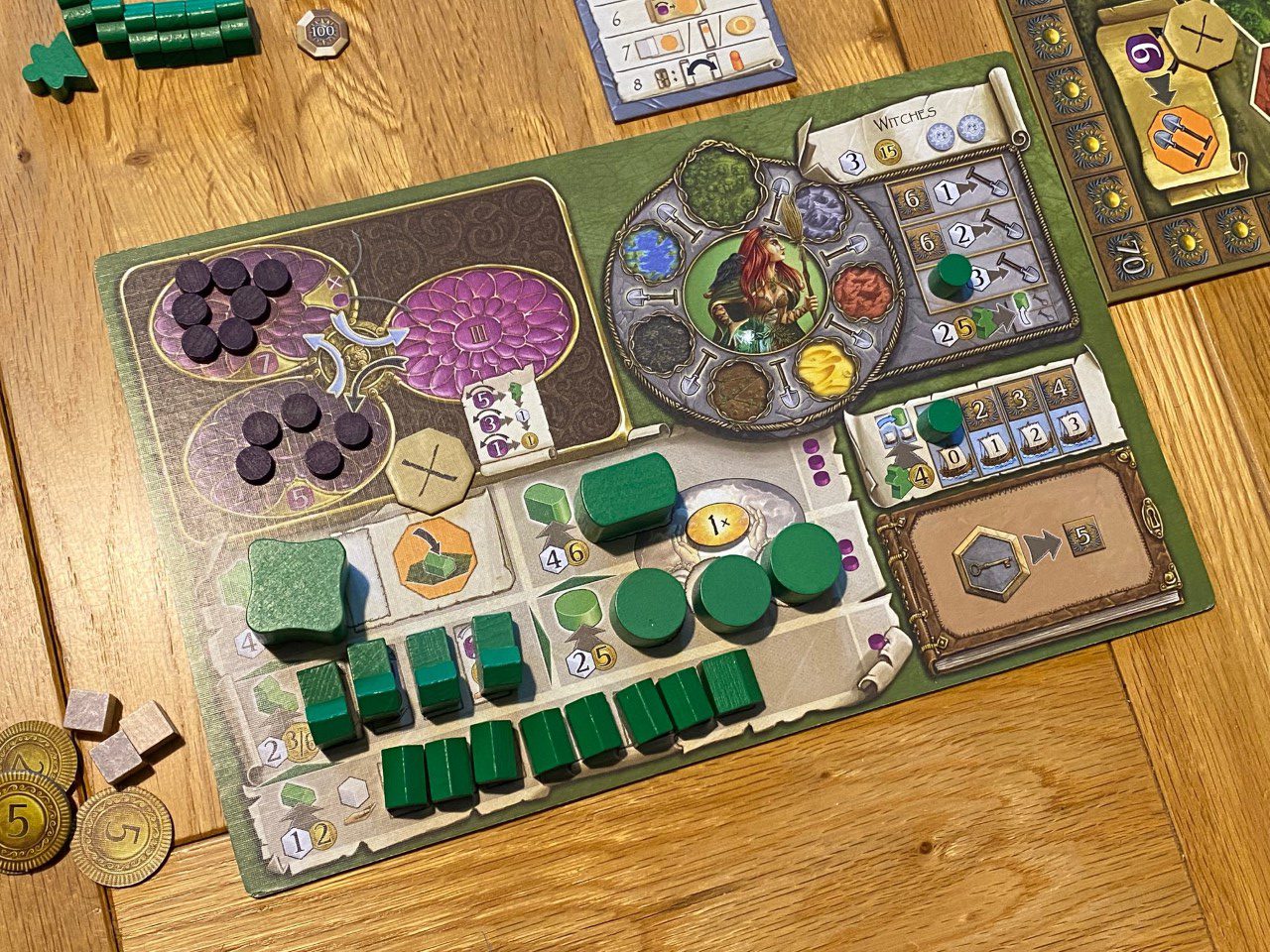 Thankfully, use of the power resource allows players to break the basic cycle of resource generation by skipping directly to creating resource of a specific kind, or even generating one or two shovels. These power actions can only be performed once per round (by any player) and don’t use a basic action — making power a valuable resource. Unique to Terra Mystica is the way that power is split between three “bowls” but can only be spent from the final one — players have to migrate power from the lowest level bowl first when it is generated, adnt this makes for its own mini-puzzle.

All of this occurs as part of a basic game of Terra Mystica Big Box and without covering even three-quarters of the ruleset, the expansions or the unique factions. On the latter of these points, it’s amazing how each faction has one or two minor benefits that break the rules in a way that simply changes everything about the game. To use a couple of simple examples, I’ll refer to the Witches (green) and the Mermaids (blue) in most of the images I use throughout this review. 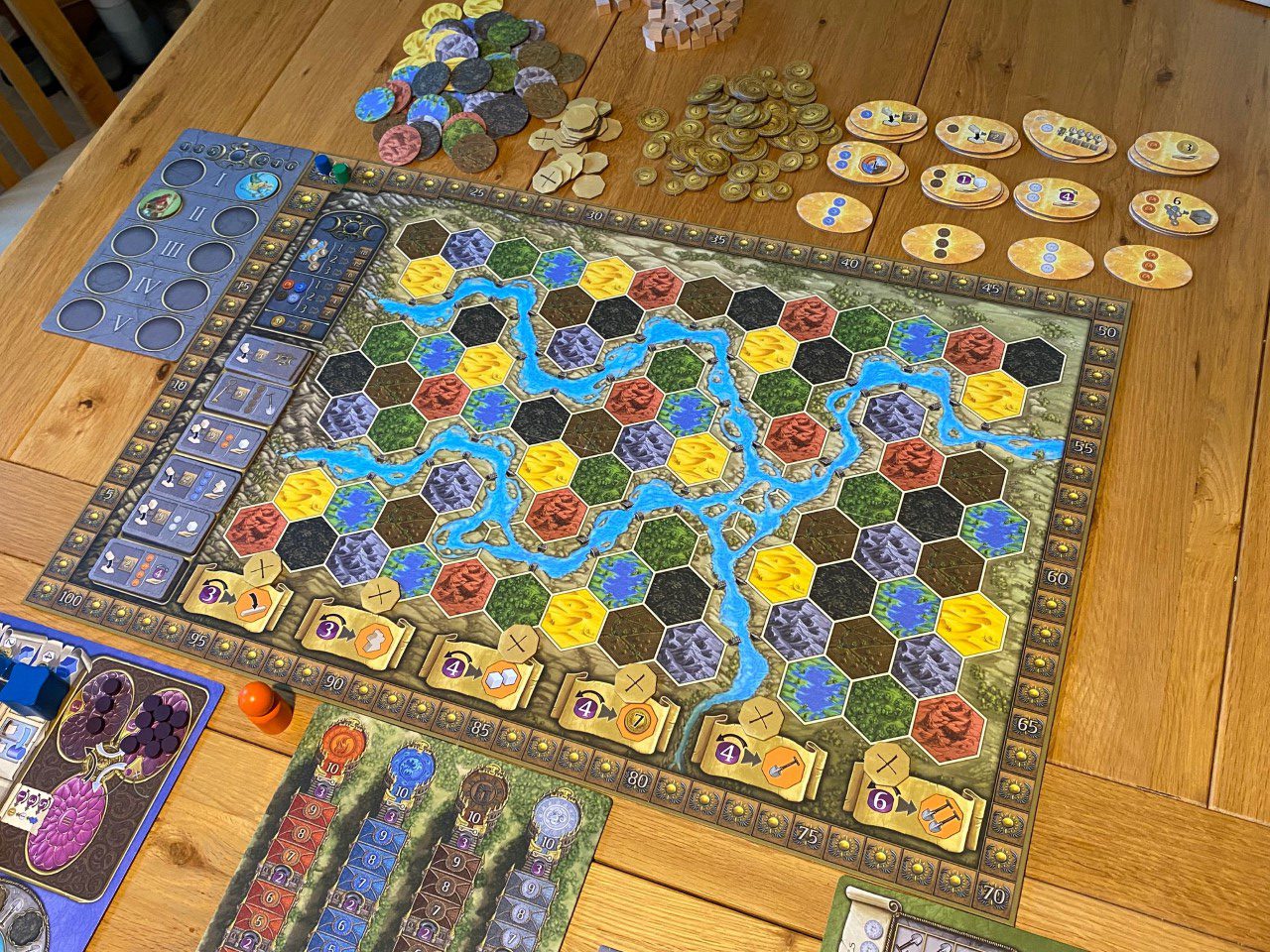 The Witches, upon unlocking their stronghold, can place a settlement on any green space once per round. This ability is simple and massively useful on its own, but the witches also gain five bonus points whenever they convert a group of buildings into a city (which is always beneficial anyway). The mermaids, on the other hand, start the game with additional shipping capacity and can spread their cities across water — something which other factions can only do by building bridges. There are twelve more factions, and twelve more examples which are (mainly) just as game-breaking and exciting to mess with.

Terra Mystica Big Box is simply one of the very best mid-heavy euro games that I have ever played. As long as you are willing to push through what might initially feel like a lot of rules complexity (and then the realisation that the rules are simple, but the gameplay is not) then I think you’ll love Terra Mystica Big Box. The base game is big, but the extra content adds several new modules both minor and major for players to pick and choose from — whether that’s just the player order track or race draft variants, or the full Merchants experience, there’s loads to go at. Terra Mystica Big Box is undeniably a masterpiece, and I can’t wait to play it again.

You can find Terra Mystica Big Box on Amazon.