Switching over to Mini Metro on the Switch

Do you look at those stylized subway/tube/underground railway maps and wish you could create your own? Do you want to get incredibly anxious when you see too many geometric shapes in one place? Then Mini Metro sounds great for you! Now out on the Nintendo switch!

For the uninitiated, Mini Metro is a superbly simple yet aggravating metro planner, where you create routes and trains to move people about various cities. Starting off with just a few lines and a couple of stations, you build a small network to move the geometric passengers to their identically shaped stations. Every week you get a few new unlocks, giving you some choices between new lines; new trains to put on the lines; new carriages to increase the capacity of trains; and tunnels, which let you send trains under rivers.

As before, Mini Metro is delightfully pretty, with an aesthetic pulled straight from the London Underground, complete with lovely primary colours and a mix of straight and curved lines, with no basis in reality. Looks nice, though. The sounds are still extremely relaxing, with a low synthy beat in the background. All the trains make little beats whenever they move or transfer passengers, making each level a constantly evolving little synthscape, slowly ticking along in your ears. 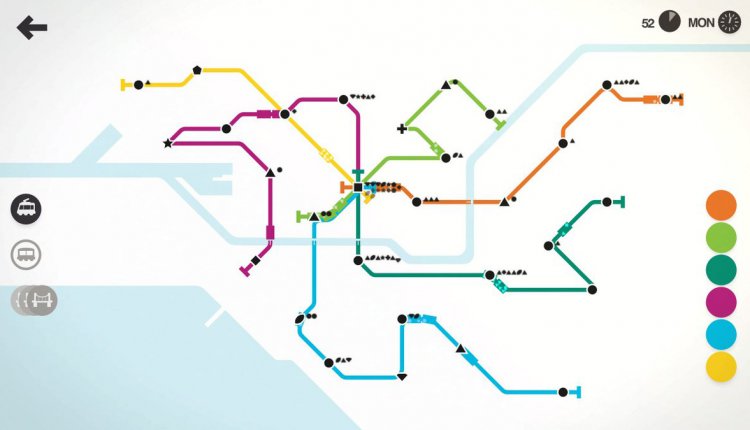 Sadly, the controls on the Switch port of Mini Metro are atrocious. The analogue sticks move your cursor around the screen, but instead of freely moving it around, with maybe a little lock-on to assist you, moving the analog stick just jumps your cursor to the next clickable point on the screen, such as a station, train, UI button or train line. This is incredibly uncomfortable and makes editing complex train lines, or even remaking an entire line, very time consuming and frustrating. I get that this decision helps with the lack of accuracy due to analogue sticks, but for me it’s just clunky and annoying. Thankfully, the touchscreen works fine, but in docked mode the sticks never work the way I want them to.

Interestingly, Mini Metro also has local co-op for the times when you and a friend want to scream at each other that the hexagon station has too many passengers, and that their shoddily built line is terrible, and that they should just stop and let you fix everything… or, you know, for the times you want to sit down and enjoy a game with a friend. 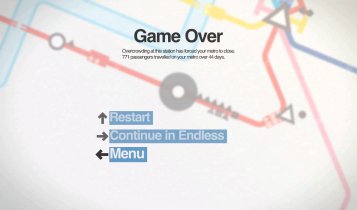 As with all the other versions, you start off with three levels unlocked, which you must get a minimum number of passengers on before you can unlock the next level, and so on. Each level has three modes: normal, extreme and endless, where you can’t die. In addition, the daily missions are still there, giving you a set level and mode to complete every day.

Overall, Mini Metro on the Switch is a totally fine port of Mini Metro. While the docked-mode controls are absolutely dire, the touchscreen mode works very well and the large screen size is great. I will certainly see use for it sitting around or, amusingly, when sitting on public transport.

Interestingly, the PC port of Mini Metro was one of the reviews I did that actually got the notice of the glorious leaders of Big Boss Battle in the first place, so you can read that hideous mess of words here.