Stuffed Fables is the follow-up (rather than the sequel) to designer Jerry Hawthorne’s previous game, Mice and Mystics. Like its predecessor, Stuffed Fables tasks up to four players with assuming the role of one (or more) cute, fluffy creatures (in this case living toys) who must save their human companion by working together against the enemies that feature throughout. 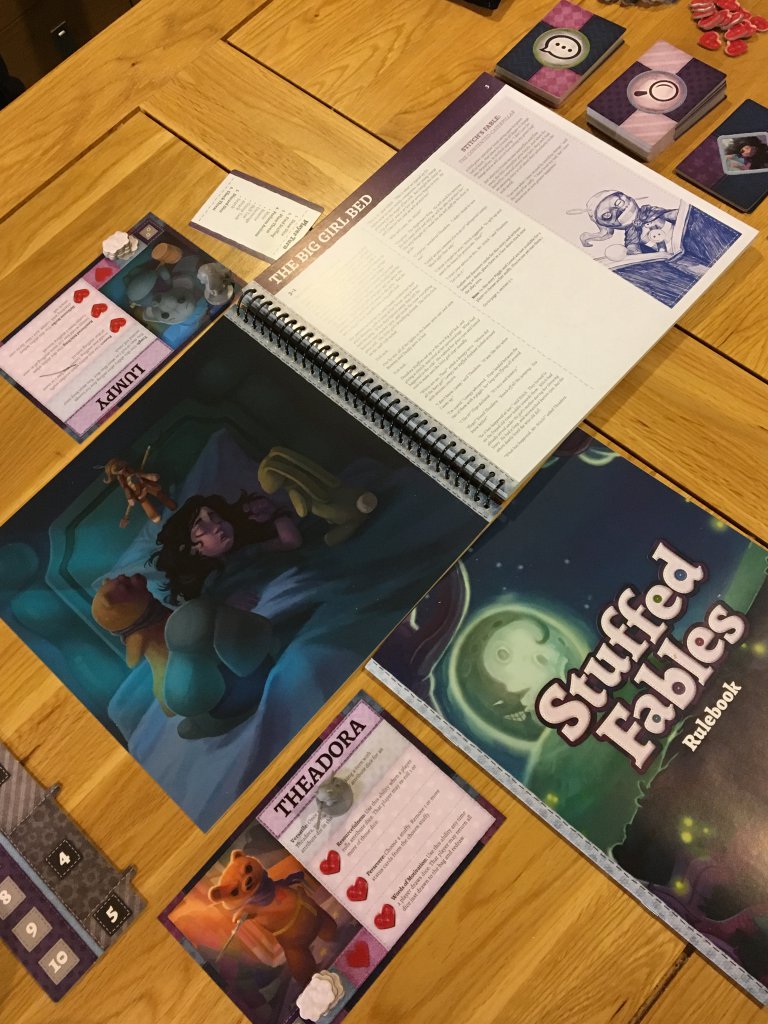 Stuffed Fables is a storybook game that takes place, literally, within a large, ring-bound book. Each double-page spread features a beautifully painted board on one side and a mixture of special rules and passages of italicised flavour text on the other. The players take turns to act in the role of The Bookkeeper, a job which involves reading the story text at the beginning of each new page, then managing any specific rules or events that relate to whatever is happening at the time.

There are seven complete stories to work through in Stuffed Fables, each of which comprises about half a dozen pages and takes about an hour or so to work through — sometimes maybe and extra half an hour depending on some of the more complex nuances that exist within one or two stories. On that note, Stuffed Fables is not inherently complex once you get used to the mechanics, but there are a few things to manage, several of which are relatively unique to the game. 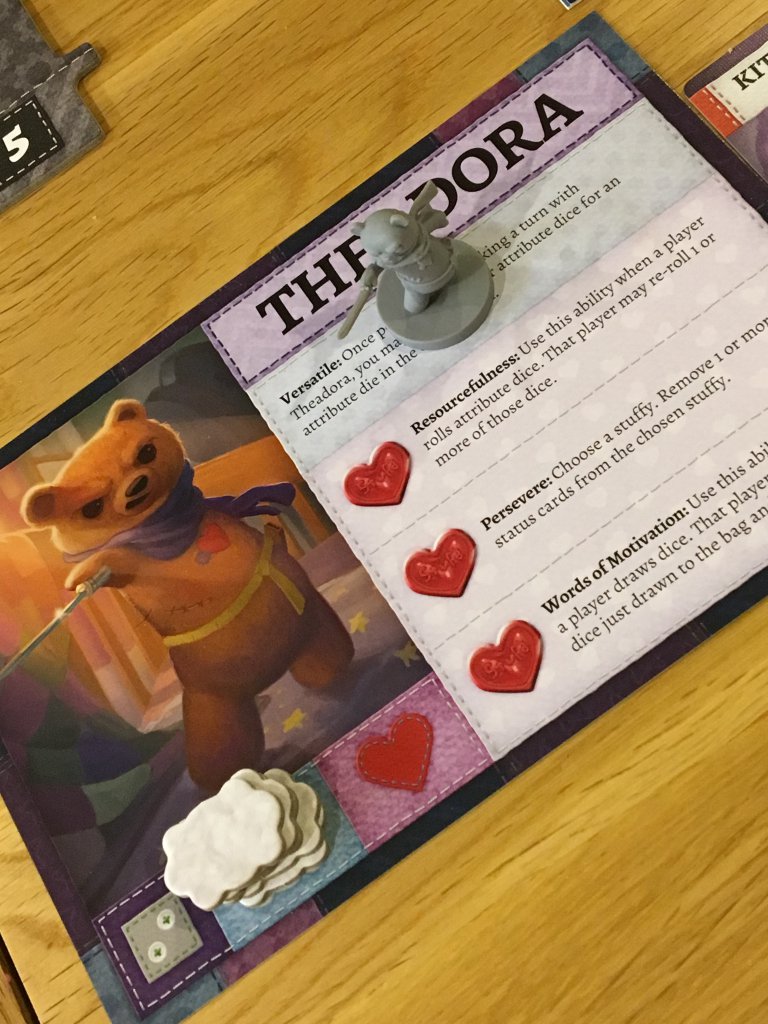 At the highest level, Stuffed Fables features elements of miniature combat based on asymmetric heroes with different skills as well as dice drawing (from a sealed bag) and then rolling of said dice to determine the outcome of certain events. Collectible items can increase and expand the capabilities of the Stuffies that players control, whilst an unsealed (but slightly secret) deck of cards contains specific items, enemies and other features which may or may not occur in each story.

Stuffed Fables deals with the seemingly whimsical yet surprisingly dark theme of a young girl who has moved from her crib into a big-girl bed for the first time. The story soon introduces an evil character called Crepitus and explains that the Stuffies are tasked with protecting their human from him, lest he suppress her imagination and fill her mind with the dull, grim realities of adult life. Or something like that, anyway. 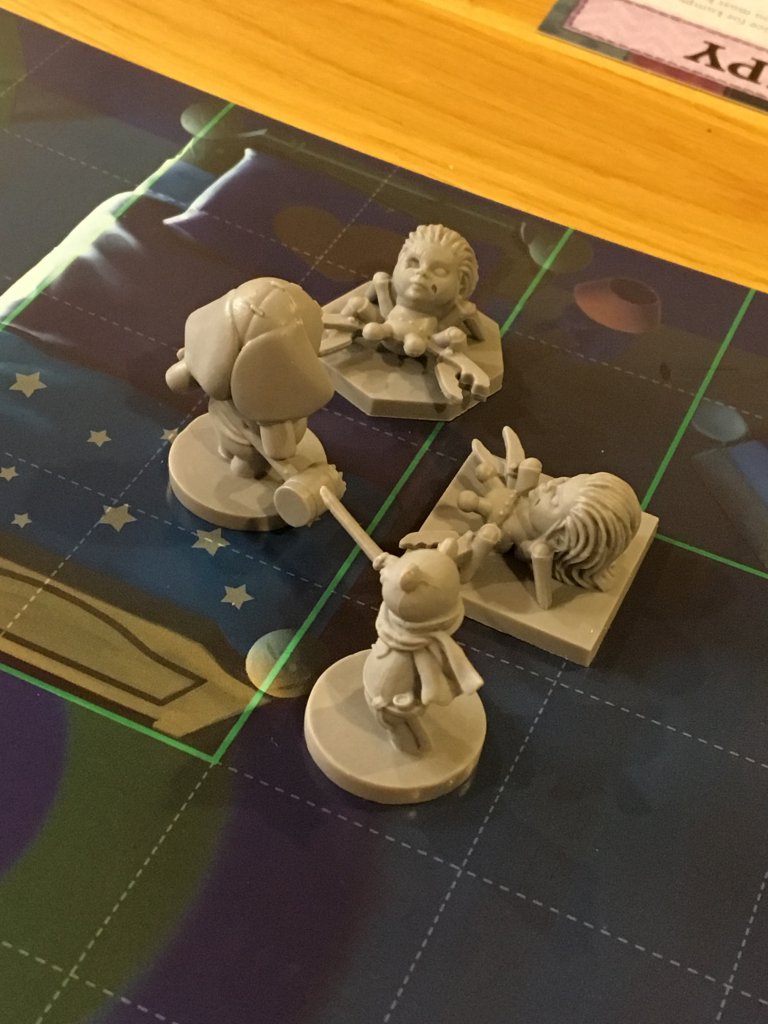 Either way, it isn’t long before the players are swept under the bed and into a world of darkness which, honestly, is quite dark. Playing Stuffed Fables with children approaching about ten to twelve years old is probably fine, but any younger than that and I suspect you’ll be in for a few night terrors thereafter — you have been warned!

Every page is set up according to the text that The Bookkeeper reads aloud. Each scene usually includes a couple of tokens that generate random events from the Help! deck, as well as several printed symbols such as buttons or numbered eyeball icons. Buttons let the Stuffies buy and sell items, whilst the eyeballs indicate specific story events that The Bookkeeper reads aloud (usually) to all players before, often, progressing an event such as an enemy encounter. 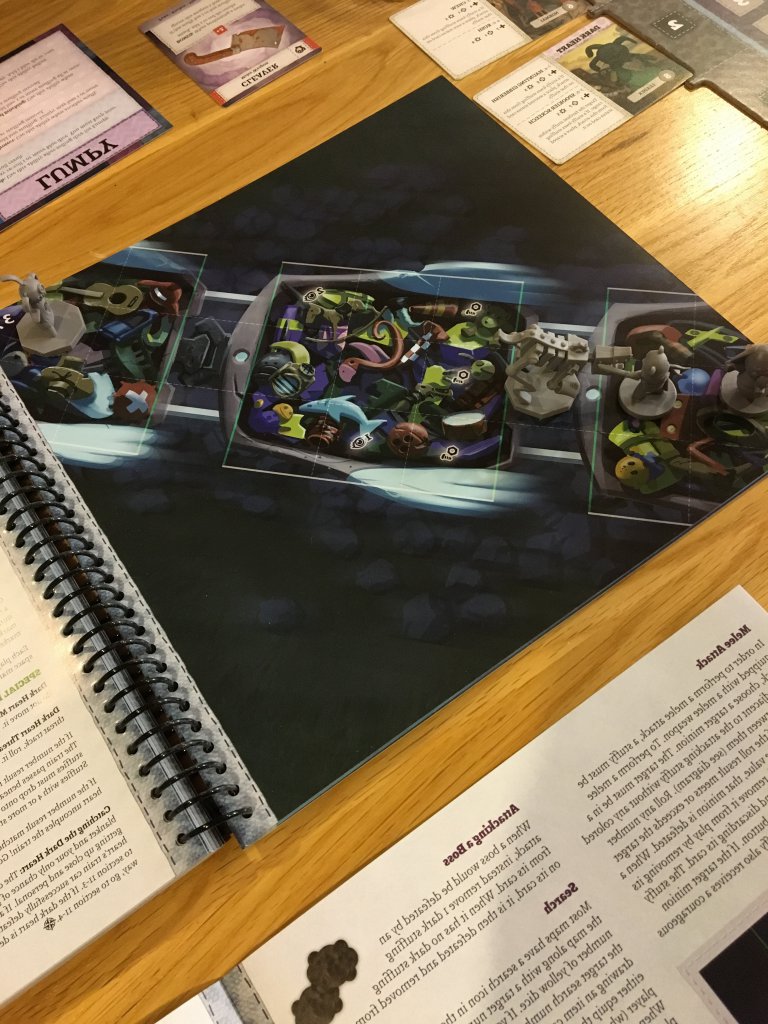 When such an encounter is generated, one or more enemy cards are placed on an encounter track. Each card features details like the defense rating, attack style and base shape of each enemy, which effectively means that each model is unique and will sometimes have skills or statistics that differ from other creatures of the same type. Enemies are activated based on how many black dice are drawn at the beginning of a Stuffies turn, which is perhaps the first unique (and initially challenging) mechanic I hit upon in the game, so let me explain.

On their turn, a Stuffie draws five dice from a bag that contains a pre-determined mix of dice (which is set by the number of active Stuffies in the game.) White dice are rolled immediately with a chance of increasing the Stuffie’s health; black dice are placed on the encounter track (whether or not an enemy is present); and other dice (yellow, red, green, purple, blue) link to specific abilities like searching, melee combat, ranged combat, wild card dice and basic movement. 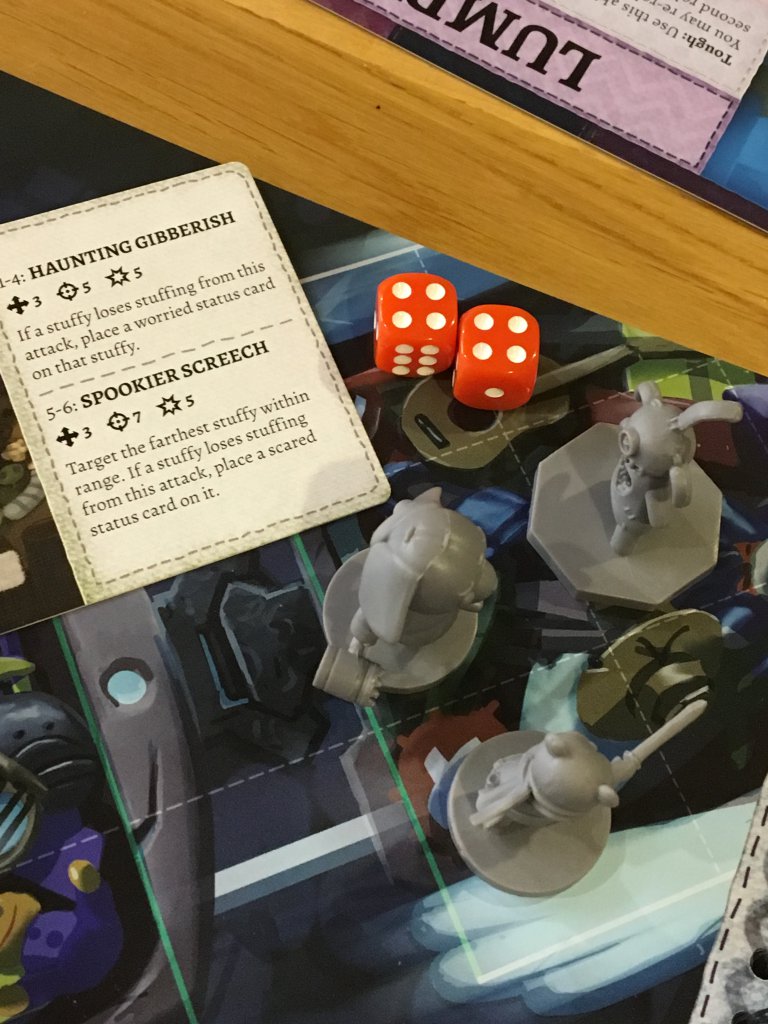 I was initially confused by the dice system, because as each player takes their turn, the dice they use are only be placed back in the bag if there is an enemy to activate. If not, those dice are still added to the track and may (if there are more black dice than Stuffies) trigger a surge, which is always described on the page. If an enemy activation occurs (usually it’s as simple as having an enemy on the board and drawing a black die) then the black die is rolled, which in turn dictates the attack the enemy launches. Assuming the Stuffies survive this onslaught, all dice are reset back into the bag for the next player.

Shout out to all those quick-witted folks who worked it out faster than me, because this mechanic is deliberate and is clearly intended to ensure that (because of sheer probability) it’s unlikely you’ll ever have more than one or two turns that don’t involve being attacked. The fact that enemies won’t always attack is a blessing, because when they do, it is generally painful. Average enemy attacks deal at least four damage and the only way a Stuffie can defend themselves is by reserving a die on a previous turn and rolling it to reduce that amount of damage. 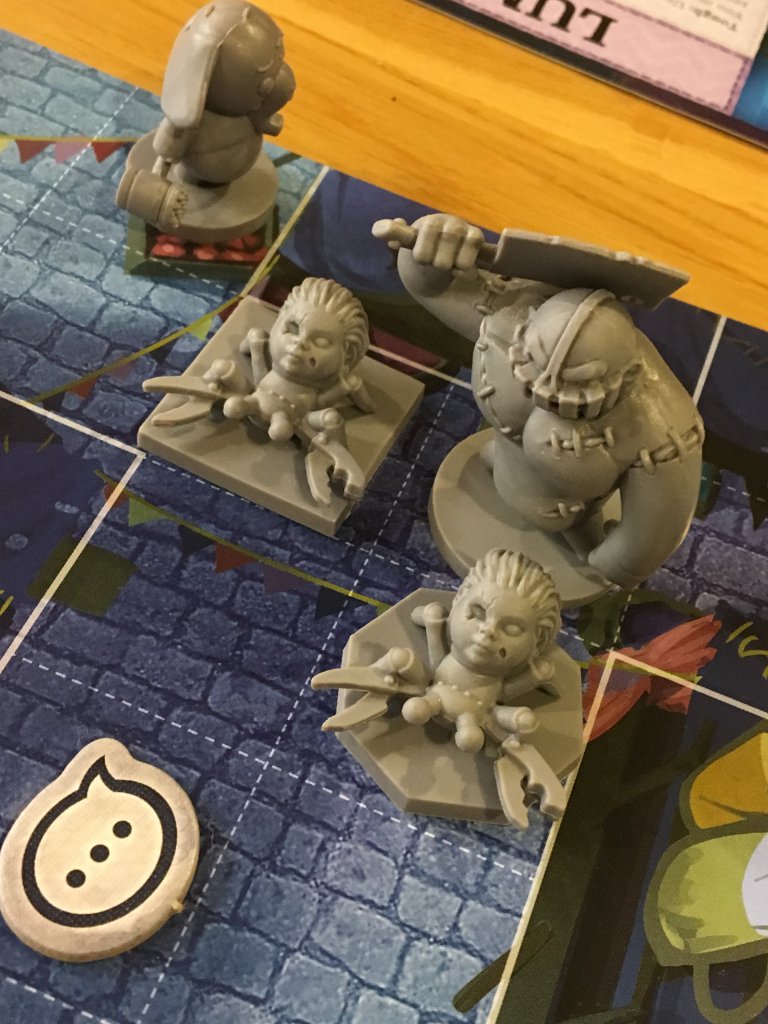 Given that each Stuffy begins the game with five health (stuffing) and is unlikely to gain more than a few extra throughout the game, there are some circumstances wherein Stuffed Fables feels very challenging and — depending on the dice you draw and how you roll — a little unfair. This is mitigated somewhat by abilities on items and the Stuffies themselves, which I like to think of as richness of design, rather than a sticking plaster. Each Stuffie has a basic ability with no cost, as well as three more interesting abilities which cost a heart token each.

Theodora, a teddy bear who acts as a kind of pseudo leader, has the ability to let any Stuffie redraw all their dice, for example. It’s not exciting, but it is often useful, especially because the surge mechanic only activates when one more black die is placed than there are Stuffies in play, but the number of dice drawn never changes. Simply put, this means that more surges happen with two players, even though a couple of black and white dice are omitted from the bag during setup. 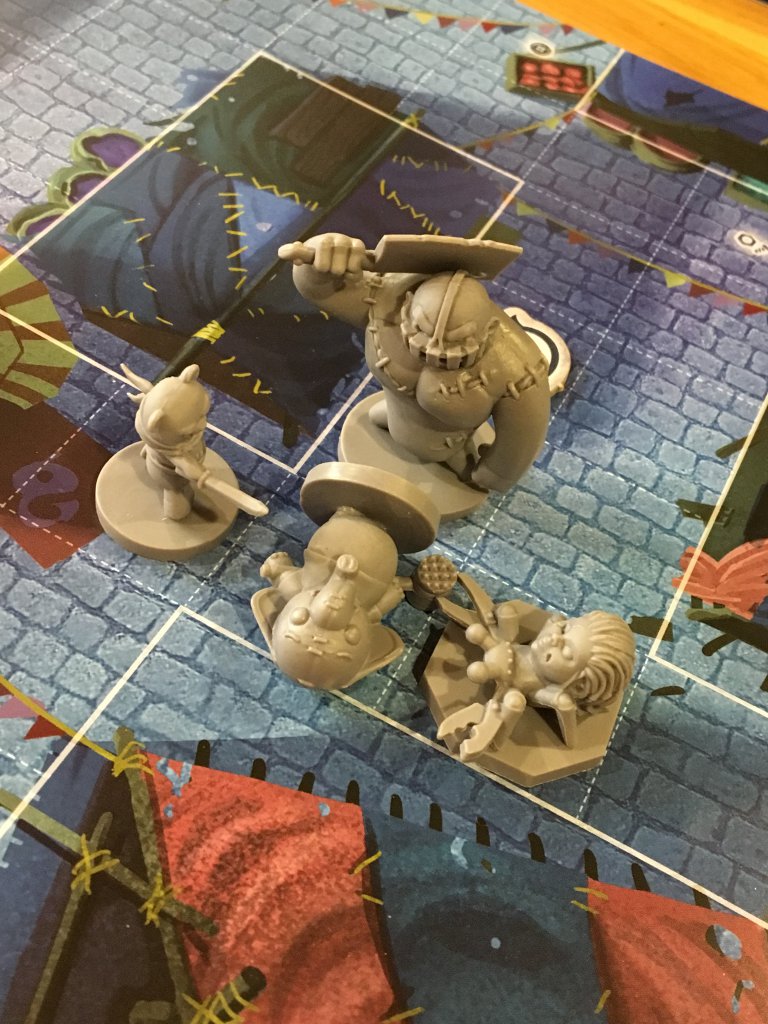 I feel I’m laboring this point more than I should, though, because whilst Stuffed Fables does feature luck — both of the draw and of the dice — which can work against players, the opposite also applies. Entire bands of enemies can be wiped out before they even activate, whilst some pages can be completed with little or no combat at all. What saves Stuffed Fables is the fact that it is so much more than a miniature combat game. In fact, it is hardly that at all — it simply happens to include it.

What I really love about it (aside from the the fact that it is extremely personally engaging for me, as father to a young family) is the fact that it blends really exceptional writing, very light legacy mechanics and considerable replayability with a genuinely interesting story. I have often found that choose-your-own-adventure games (which this is — entire pages can be skipped on occasion) can be quite uninteresting. Stuffed Fables is absolutely not — it has a clear, distinctive and charming story filled with excellent scenes and characters. 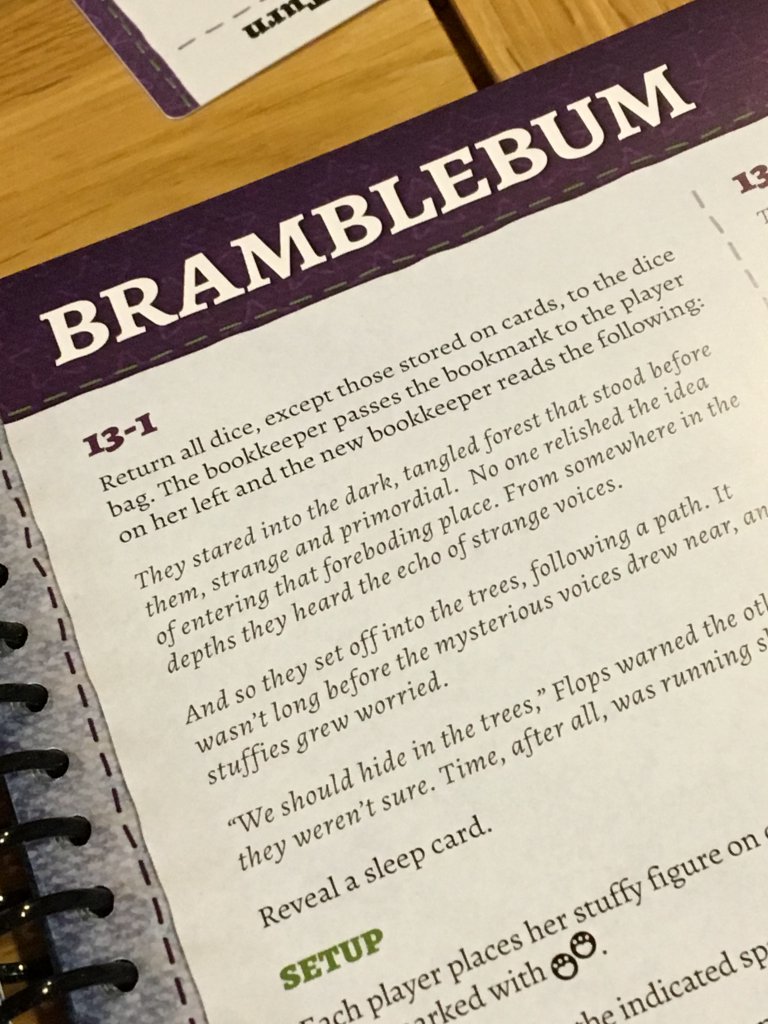 Slight rule misinterpretations (there were a couple of others) aside, I quickly warmed to Stuffed Fables, as did my fianceé. We played through its story with great interest — reveling in victories that seemed to advance our purposes and lamenting defeats that either stopped us in our tracks or simply forced the story down a different arc. As we broke the game down for the last time, we spoke at length about how much we were already looking forward to experiencing the game all over again with our children — what more do I need to say?

A copy of Stuffed Fables was provided for review purposes, and can be purchased from all good local games stores. For online purchases, please visit 365 Games