Stuck in the Middle: My First DMCA Strike [Updated]

I am Jupiter Hadley, a Youtuber and writer specifically on independent games. I have a massive passion for small games – games that developers have made for a game jam are my speciality. I cover thousands of game jam games a year on my YouTube channel, as well as some more fleshed out indie games daily. I also write for various websites like AlphaBetaGamer.com and GameJolt’s Fireside. Indie games are what I love covering – bringing light to little games that you may not have seen before, even if just for a few minutes.

Riding in my car on the way back from a trip to the store, I received an email from YouTube about a video I made last year. I do get these emails from time to time, stating that my content has music in it that I cannot monetise, so ads will run on it that aren’t mine or the video can’t be viewed in specific countries. As someone who plays a lot of indie games, and especially niche indie games for jams, I do get a lot of emails saying that I cannot monetise my content but that I am still in good standing, so I just let it go. 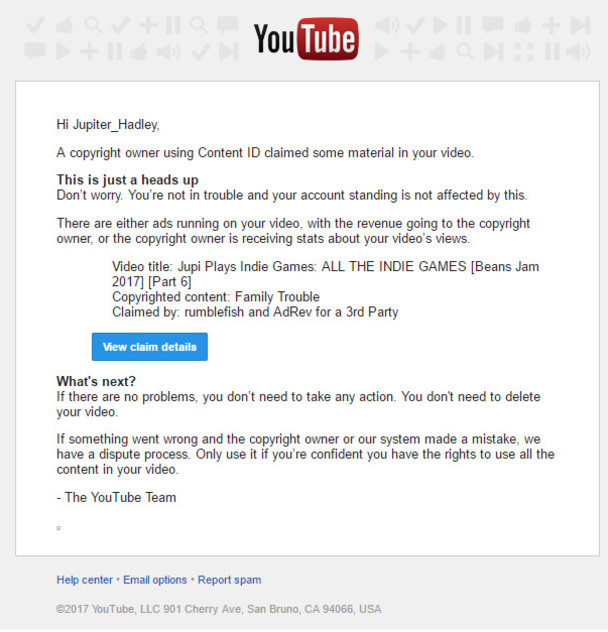 If you are unfamiliar with YouTube, allow me to explain. You can get these claims without anything happening to your account. In fact, sometimes they are automatically applied before your video is even published but during its processing stages. You can dispute the strike and attempt to make money off of your video, but I have never bothered in the past.

However, this email was slightly different. This email was a copyright takedown notice from a person who had decided I needed a strike for making a video of a game that contained their music. Unlike a Content ID claim – which automatically scans videos and flags any that contain matched audio – this type of claim has to be made manually for each disputed video.

This strike sticks with you for 3 months. If you get 2 more strikes in this time frame, you completely lose your YouTube account, and can’t even make another monetised in the future. You also have to go through a quick compulsory ‘test’ to login to your YouTube account again – YouTube requires you to watch a video and answer some questions. Nothing huge, just a bit of an annoyance. 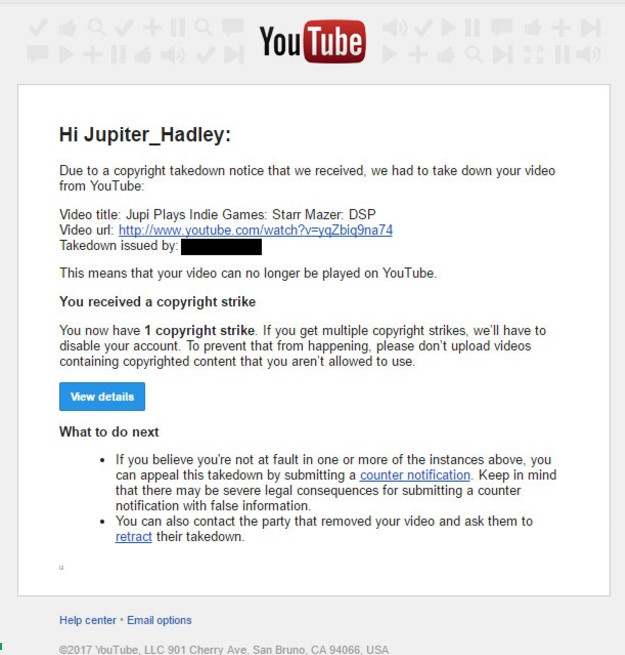 The creator of this copyright claim could, if they were so inclined, have opted to notify me so that I could have removed the video instead of attacking my account. Now there are only a few ways to get rid of it. I can file a counter-notification which is an extremely scary thing to file. The YouTube page about this basically says that the claimant can counter sue you and that you might want to talk to a lawyer first. The other option is to ask the person who initiated the strike against you to withdraw it in return for your video being removed from the internet. This sounded like the safest route (and you are provided with their email) so I figured a quick email to them would clear this situation up.

So I did. I emailed the person who had flagged my video. I had only made a little Let’s Play of an indie game – I had nothing to do with the use of copyrighted music in a game back in 2016. I figured the musician would understand that I am just someone caught in the middle and would help me. But then I started googling. 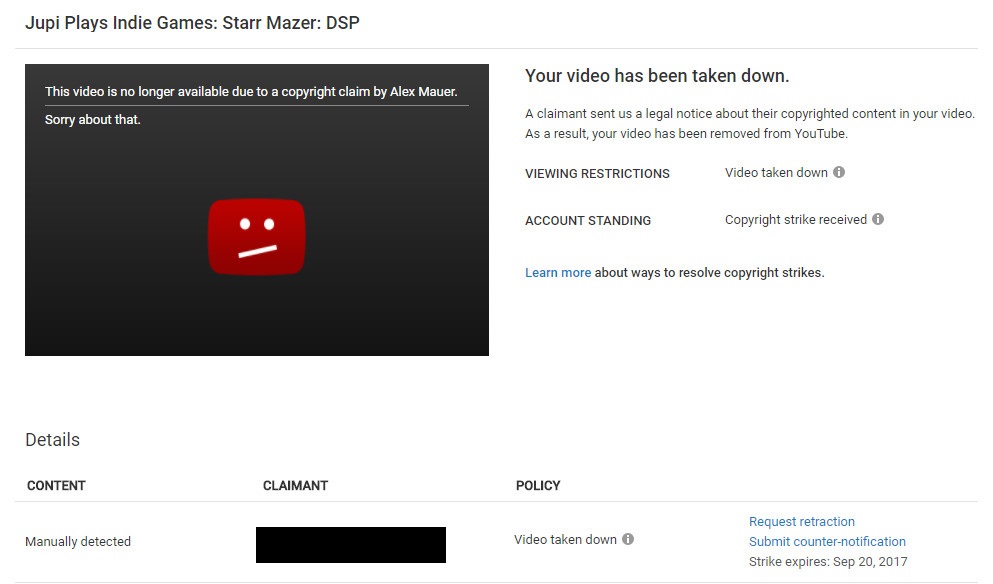 I quickly found that the musician had struck a load of people – even gotten a twitch account suspended – for playing this game. A few people said they had contacted the person who made the strike, who replied saying they weren’t going to remove it. With this in mind, I contacted the developers of the game.

These developers had stated that this was an issue they were dealing with between them and the musician. But yet, here I was, waiting in the crossfire along with a few other content creators who have had the same strikes, waiting the three months it takes for that strike to go away.

These strikes mean different things to each of us content creators who were hit with them. I have never had a strike like this before, but it certainly is a scary thing.

“This Strike means that I have to check it out 2-3 or 4 times before I submit something. I mean, [I] never [thought] that this kind of things could happen to me, I don’t even monetize my content. I just do it because I like indie games and try to share this with my community

I mean, we don’t have any fault that the developer or the musician have some disagreement and unfortunately we have to load back with there actions.”

A lot of the content creators who make videos of indie games do it as a hobby. We do it through a passion for indie games and a desire to shed light on games that might be overlooked. Having a strike against our account is extremely discouraging.

“It does make me question how long I should keep videos up on my channel of early access/alpha/pre-alpha games of an indie nature. I still want to create videos to raise awareness of these games and also to help the developers of these games get valuable feedback on what they are working on from [an] independent source.

To be fair I’ve had other videos get content id/monetization take-overs by musicians who did the music for games I’ve covered I don’t have a problem with that as they are the actual producers of the content. … I would have even been fine with taking the video down myself given the opportunity to do so.”

LootBndt, a Youtuber and Twitch streamer affected by this strike for having only less than a minutes of gameplay footage of this game, has to take new precautions when it comes to covering indie games in general.

“Getting a strike from an old video without warning does worry me as this could happen on any of my previous content! I will also be a lot more wary of covering indie games in the future, definitely researching more into the developers. It does impact my future content as this issue could happen again and cause serious problems for my channel.”

SirTapTap, another YouTube channel who has been hit with this strike, finds that YouTube should have a better system for this sort of thing.

“But the fault lies on the person making the claim and to a lesser extend Youtube. Who I’m quite annoyed at not providing a better way to deal with these and prevent frequent abuses. I’ve been Content ID’d before (never struck) and I’ve noticed there’s no process to actually ban an abuser (even though they’re violating the law), only to fix one single claim. It’s very one sided. But I’ll keep making videos and I’ll keep fighting back against copyright abuse.”

Temmie Plays! had more than one video removed about this game.

“Content ID is bad enough, I like to keep an ad-free channel. but strikes can make you lose your channel, and every video ! and I have over 1k videos.

That’s the issue, YouTube has automated systems, no human sees anything till it’s dead serious.”

For me, this means that I will have to be slightly more worried about the videos I put up for the next few months. I have to make sure that the jam games I cover won’t result in another strike. I may have to pursue this strike and get it taken care of, just for the peace of mind. My YouTube channel contains 5 years of work. Thousands of games are documented there – some that you can’t even find anymore. My channel is my passion, though at some point I hope it makes the jump to being my job. It’s a record of my past work. Having this strike puts me on edge.

I wish that this musician didn’t strike all of us and instead contacted each of us to remove the videos ourselves. I understand that sometimes there are disagreements behind the scenes, but the content creators just looking to support the indie development community shouldn’t have to take a hit for it. Please consider thinking twice before taking out anger on us.

[Update] Thank you all so much for your concern and reaching out to me about this. I made a short video to address how this is affecting my channel and what I have done since the article. You can watch it here.