Take action and sci-fi tropes, slather them with a bright, almost radioactive colour palette, and stuff the world with an army of strange, intergalactic aliens, monsters and droids. Pop that into your pre-heated computer and in a short while, you’ll have Star Renegades.

There’s an incredible number of things going on in Star Renegades, but through the neon environments, skill-balancing jRPG-esque combat and creeping rogue-lite progression there is one thing that really sticks out for me throughout the entire experience. Nightfall.

That’s really weird because Star Renegades has spent a lot of time rattling around in my mind; It’s a game that I saw before it was signed with a publisher when movement was done by sliding along pips on a map, and I played it at a few events, enjoying it as it twisted and turns. It was a game that I have continually told myself that I’d set some time aside to play, knowing that I’d enjoy it, and, I’ve played it, and I enjoyed it… but goodness, the night time moments, that’s what I’ll remember it for.

Anybody who knows enough about warfare will know that in most cases, armies don’t clash at nighttime. Nobody can really see at night, it’s harder to communicate, most people sleep at that point in the day, and, well, it’s just something that’s not really done. In most games, movies or TV shows, however, armies either fight through the night or simply resolve battles almost immediately. So, when it becomes night in Star Renegades, and suddenly nobody will fight, it feels both logical and unfamiliar. At these moments you can move around the battlefield and collect a few items before deciding where you want to settle down and set up camp. 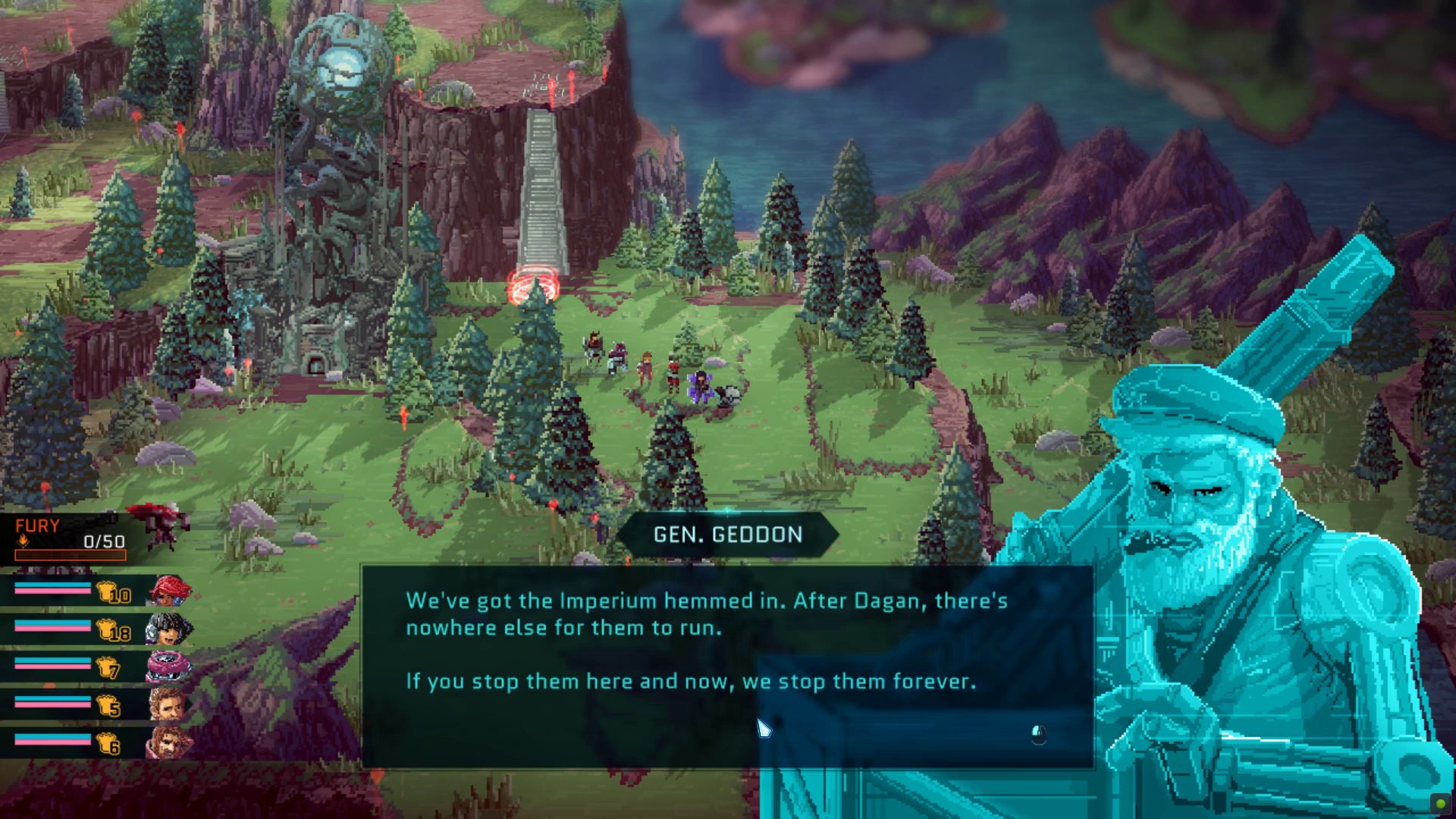 Another reason why those nighttime moments feel so important and poignant is that camping is, as it turns out, pretty essential to a long run.

That’s because Star Renegades is a lot of things at once, even by its own description: a rogue-lite strategy RPG. That doesn’t really cover what makes it better than its peers though, the character system. Each playable member of the ragtag selection of characters that you can take into combat is totally different. Your first run gives you Sci-Fi twists on a DPS fighter, a rogue and a Cleric, but after clearing a planet you can expand your crew, and each of the characters have their own playstyle. By the time you’ve got the entire roster of characters, it is more than possible to make an almost entirely flawed party who can barely survive a fight – pop the tank in with the cleric and the (glass cannon) marksman and you’ll feel that pretty early on.

The reason that it feels so easy to fail is that the difficulty ramps fast. That combined with different types of defence, different types of attacks as well as enemy moves that can instant-kill you, it definitely does a great job of keeping the intensity up. You’ll need to have a team who can shatter armour, break down shields and also do damage that stuns and knock-back your enemies, and even then you’ll need to juggle risk and reward in order to beat the behemoths, which are essentially the end of world bosses. 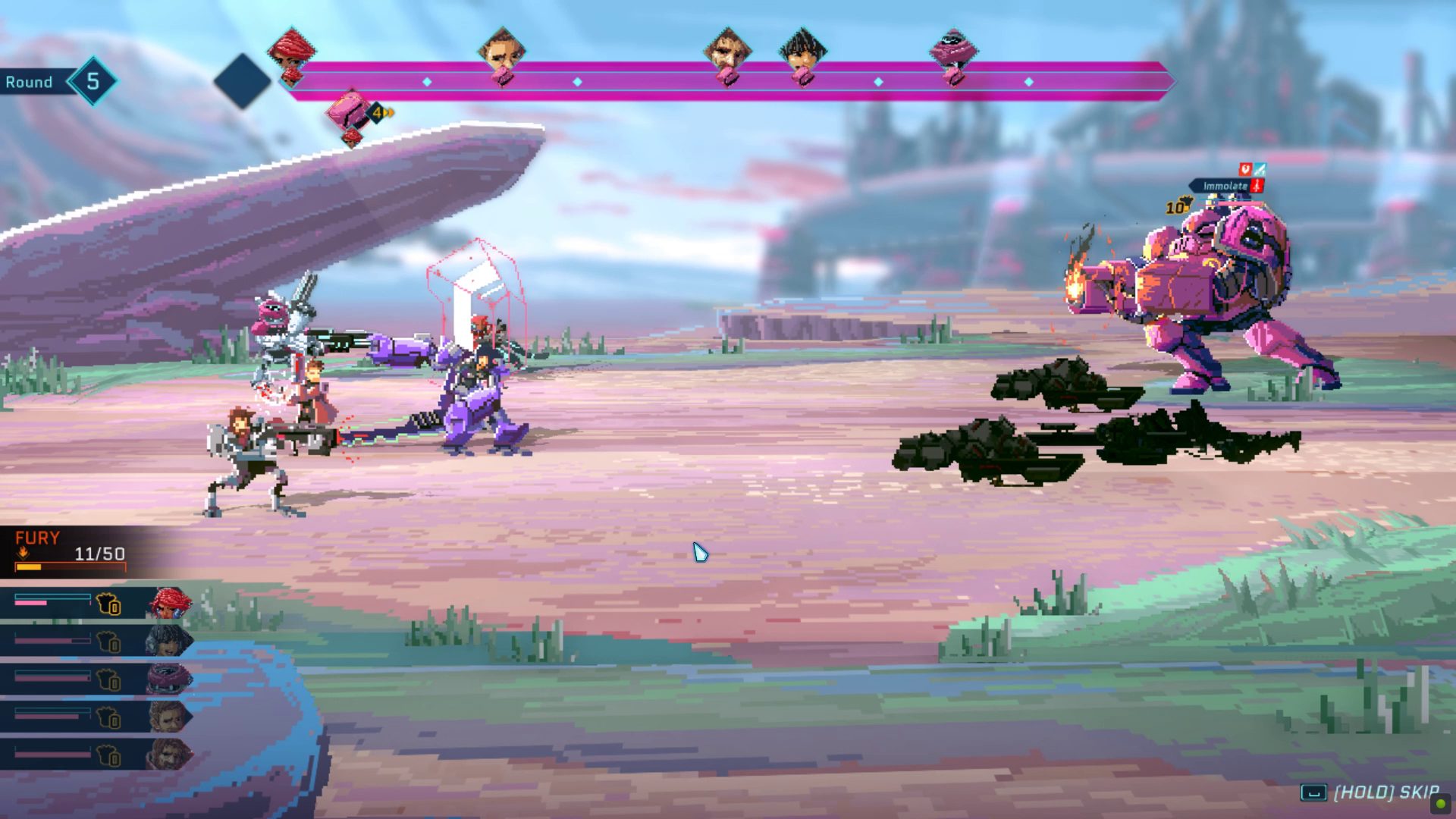 Your toolbox is very limited, but the Stun/Break mechanics are definitely one of the most important tools. Any unit in the fight which will attack in a turn is placed on a bar at the top of the screen. If you attack an enemy before they attack then you get a critical hit, which is very handy, but you can also knock them further along the bar with certain moves. If you knock them all the way off the edge then they skip a turn. This is essential knowledge, and critical to survive against some of the enemy lieutenants and behemoths — you need to counter, critical hit and interrupt your enemies in order to thrive.

There’s more at play though. Your characters can use cards while at the campfire, at camp, between every third combat. This is a way for them to build a relationship – which can unlock new character classes – but is also a buff and nerf system, as well as a chance to heal. Your shields will restore between each combat, but you’ll need to carefully manage cards during camp in order to restore health and armour. 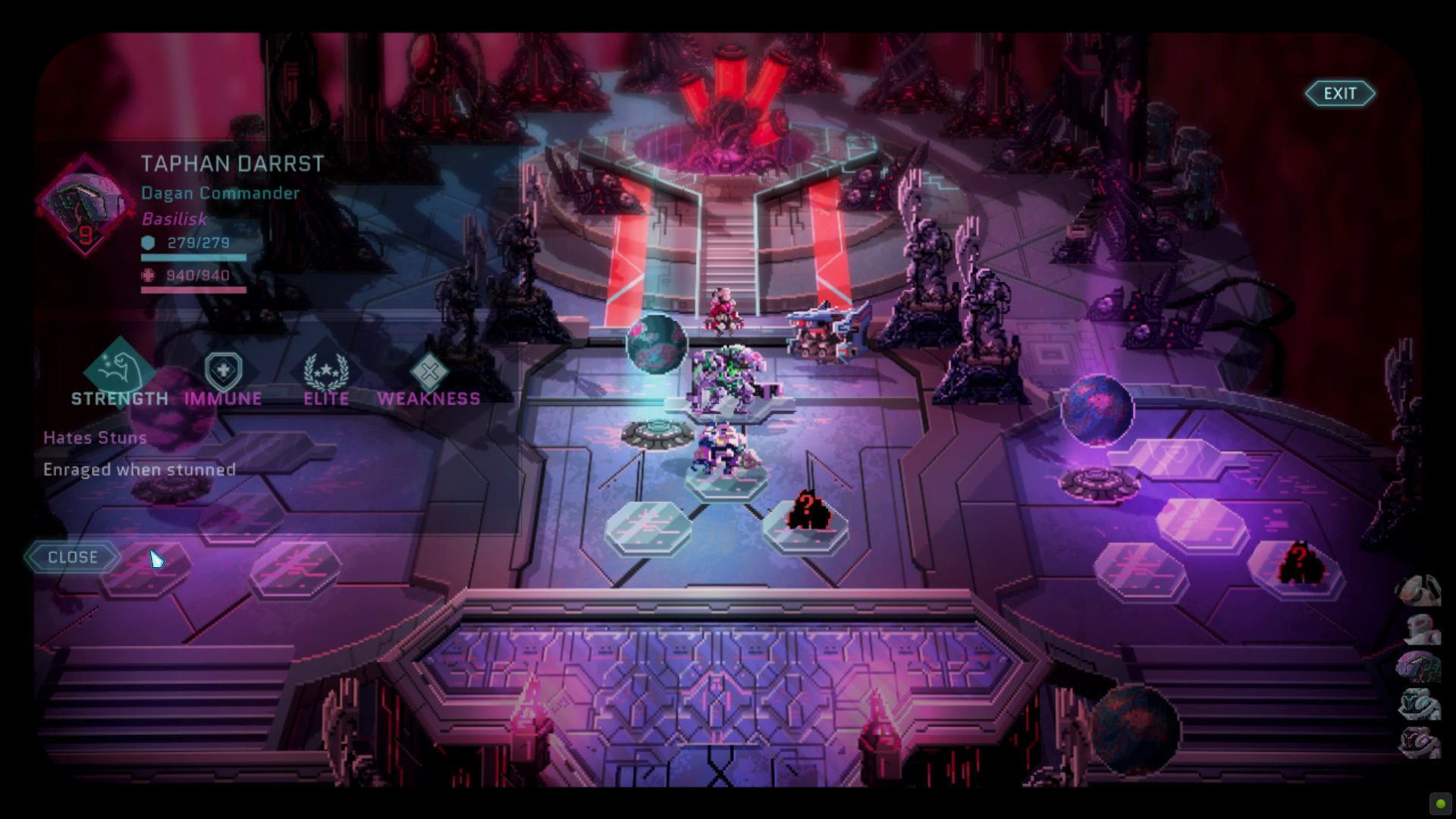 Star Renegades can be distilled down to a sequence of fights and boss fights as you carve your way through the Imperium Throne Room (which has a hierarchy system reminiscent of the Nemesis system).  However, the persistence of upgrades between runs, the chance to unlock new classes, and the variety brought by the new Lunar Base missions, as well as the optional map missions, is more than enough to keep it from feeling old. In fact, the only real negative to the formula comes from how sometimes you find a great combination of classes for your team and it becomes hard to break away from, which can cause grind to start setting in.

But, if you can keep mixing things up, completing the bonus missions, and using every last possible move on each planet then you’re sure to keep pushing forward as you learn from your mistakes, and then, like me, you’ll easily sail past your first full game completion and beyond.

Star Renegades is available now on PC, PS4, Xbox One and Nintendo Switch.